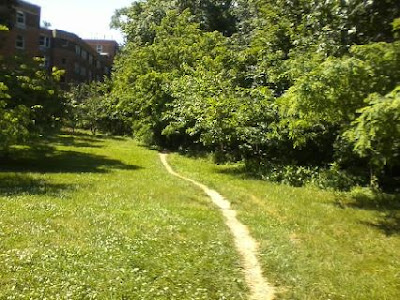 A trail leading from P Street in Georgetown into a thicket of trees, Washington, D.C., 3:10PM May 25, 2013.
This is just on the Georgetown side of the P Street bridge over Rock Creek and Potomac Parkway. 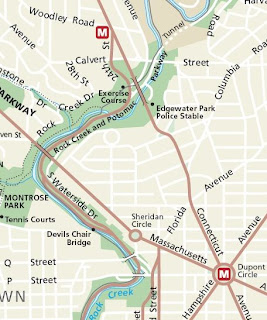 This is actually Rock Creek Park, although at this point (as shown on the map at left) it is extremely narrow. It's basically just on either side of the Rock Creek and the parkway that runs along it.

It spreads out into the "great green gash" farther north in D.C. and into Maryland.


I know I promised a "Saturday night jukebox" musical interlude entry (to replace the Friday night musical interlude I did not write last night because I got so tied up with this entry and then wanted to go out before it got too late).
However, I again do not have much time and there is no song I particularly want to post. It just might be the case that I'm forcing the weekly musical interludes and that just won't work. I have to want to post a particular song. 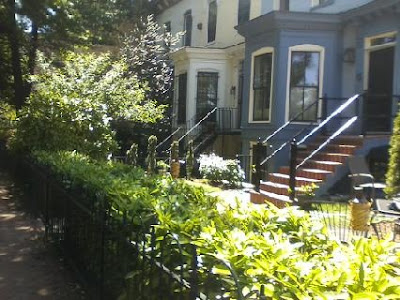 
So instead of a musical interlude, Gentle Reader, you're getting this entry. It features some of the pictures that I took today on my aforementioned roughly 3 mile round trip walk from my apartment over to Kalorama and then down to the Watergate and back with a 2-hour stop at the gym. 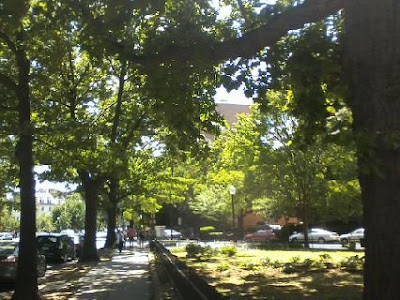 The 1800 block of New Hampshire Avenue NW, Washington, D.C., 2:33PM May 25, 2013. I used to live in the Harrowgate directly across the street from this triangular little park with its towering chestnut oak tree.
*******


The reason I don't have much time is because I have a dinner date, sort of, with this fellow Frank I met about a month ago at Bua when I was getting dinner to go after the gym. We are meeting at Old Ebbitt Grill at the Old Bar or ('round the back side) the Oyster Bar. I'm hoping this Saturday night OEG visit is better than the disastrous one last Saturday night.
Thereafter, I am going to No. 9 and/or Nellie's. I went to both places last night, first No. 9 and then Nellie's. It's not that kind of date even if it is on a Saturday night. As it is, it won't shock me if he doesn't show up or we fail to meet. 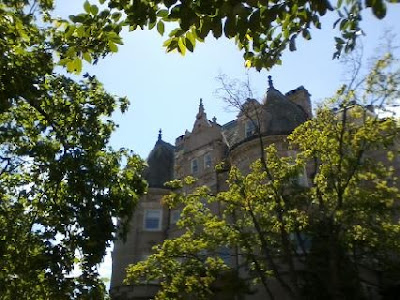 The Argyle House at Massachusetts Avenue and 22nd Street NW. I had stopped at the "Spanish Steps" near here and was on the phone with my dad.
*******

There was an absolutely stunning and gorgeous Full Moon hanging low in the southern sky, resembling like a circular white lantern. I couldn't stop staring it while walking down 16th Street. 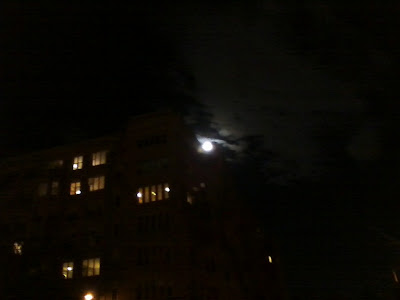 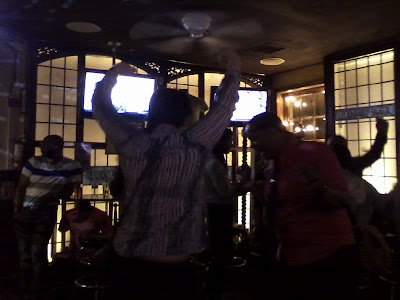 
As for tomorrow, I am going with Quill to the Rockville Hometown Holidays festival, which apparently is in its 25th year. This means that my last time there -- in the long-ago and troubled late spring / summer of 1992 when circumstances brought me to the D.C. area for good a several months later in September -- it was the 4th "HTH" event. The Metro Red Line is closed north of Twinbrook Metro this holiday weekend, so we are meeting at Twinbrook Metro to catch a shuttle. We may meet up with my co-worker DD and his family. 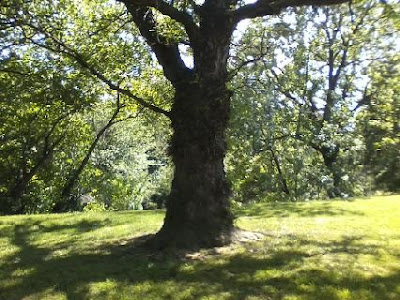 
As for Monday, Memorial Day, I have no plans. The gym closes early, so I likely won't make it. I am also not going tomorrow. I made it to the gym today -- in fact, I just got back from there. I did a 4 mile jog on the treadmill, approx. 40 minute weight-lifting, and a 25 minute swim / 25 laps. 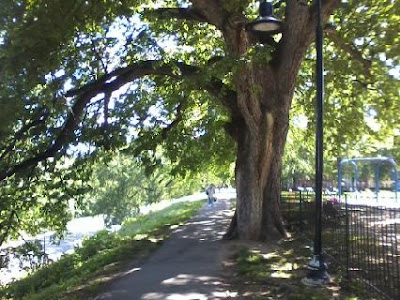 A graceful elm tree growing along the narrow trail that runs along the steep drop-off down to the Rock Creek and Potomac Parkway (the Rock Creek itself is on the other side of the parkway), Washington, D.C., 3:19PM May 25, 2013.
*******


While in the pool (just before I got out), I experienced something very beautiful: The sunlight reflecting off a building across the street (Rhode Island Avenue) created at one part of the deep end a pattern of dappled light in a spot of vibrant turquoise blue water. I sat at the bottom for few seconds looking up at the surface 10 feet overhead and watching the brilliant shimmering of reflected sunlight that actually had prismatic hints of coruscating colors. Quite astonishing -- as if I were in a tropical lagoon somewhere.
To clarify, the pool is "basement" level and the windows to the "natatorium" face south/southeast and direct sunlight really only occurs on winter mornings -- and, needless to say, I've never been in the pool at that time. 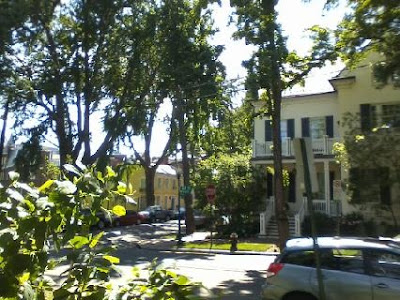 Corner house at Olive and 27th Streets NW* at the very edge of Georgetown, Washington, D.C., 3:23PM May 25, 2013.
This house intrigued me. It is actually numbered 1228 27th Street (since "Olive" is an exception / side street located, confusingly, between M and N Streets; the name probably predates the general renaming of the streets at some point in the early 20th Century (1920ish?)).
******* 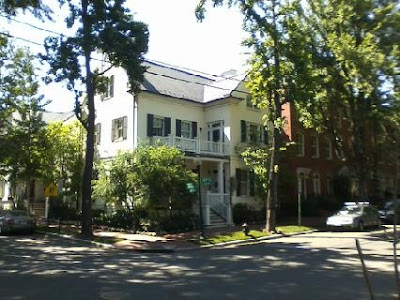 
Prior to the gym, I went on about a 3 mile walk on a route that took me over to Kalorama / the Spanish Steps, down to the Watergate, and then over to the YMCA. The day was dazzlingly sunny and gusty breezy, not to mention distinctly cool with temps. only around 65F. Oh, yes, the sh!tty and worthless KDCA climate station did NOT reach 70F today. It looks as though the high was 68F or a full 10F below normal. Overall through the 5PM preliminary update, the day was running 12F below normal at 57F. Don't panic about Fox News / GOP global cooling just yet because through yesterday, KDCA was actually averaging +0.6F above normal at 65.4F for May. 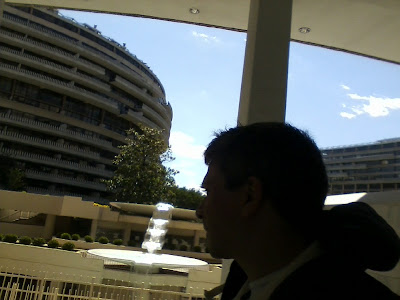 
I should mention that as it is Memorial Day, D.C. is being overrun with frickin' motorcyclists. You'd think this was Daytona Beach at, well, ANY time of the year. This also happens on Veterans Day. I really motorcycles -- primarily because of the explosive noise -- and that whole weird hybrid American sub-culture. 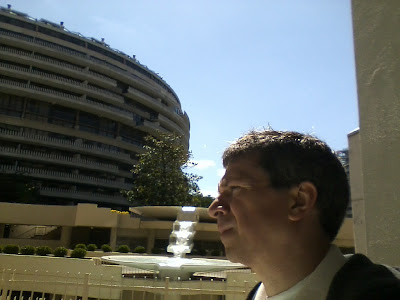 
OK, that's all for now. I may not update this blog until Monday. There is a topic I want to discuss -- namely, I seem to be on the outs AGAIN with my mother. Specifically, I want to discuss the reason for this recurring state of affairs. Looking ahead, I don't ever see it really changing. But I'll save this topic for another entry.
Yes, I am running late again as I did last week.
--Regulus
Posted by Regulus at 9:20 PM