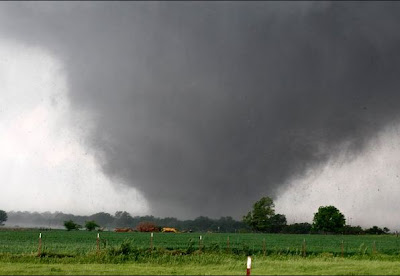 
Officials revised the death toll from the tornados down substantially with the current preliminary tally at 24 including 9 children with 7 at the Plaza Towers Elementary School in Moore. The final death toll is still unknown and may very well change from this figure. The injury count is over 200. The initial much higher estimates were due to confusion and uncertainty following the tornado.
Paragraph below revised from original to remove initial death toll figures (see above):
I took the computer home tonight and was going to post a new update but I really can't. I feel as though I should write about the horrific massive tornado that obliterated parts of the Oklahoma City area on Monday, in particular Moore, but I just don't have the emotional energy to do so. Story here. 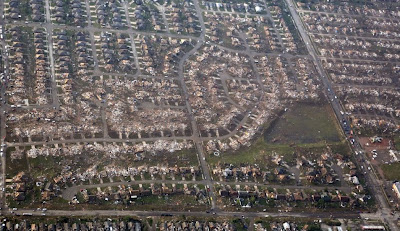 New York Times online map showing the path of the tornado through Oklahoma City and Moore, May 20, 2013. Click on image for larger version.
*******


The final death toll is probably going to be significantly higher than this given the massive extent of the devastation. It wouldn't surprise me if it exceeded 100. However, the death toll is far, far lower than it would have been in an era before Doppler radar and far more accurate extended forecasts of severe weather outbreaks. 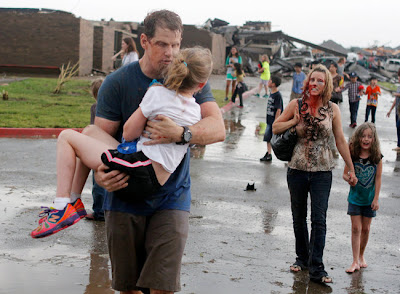 
This is particularly true given that I have some political opinions about the basic necessity and human civilized decency of disaster relief and general social welfare that will now -- NECESSARILY AND WHOLLY APPROPRIATELY -- kick in to help these folks to rebuild their lives. That's what we do for each other in America, not to mention when disasters strike other parts of the world. 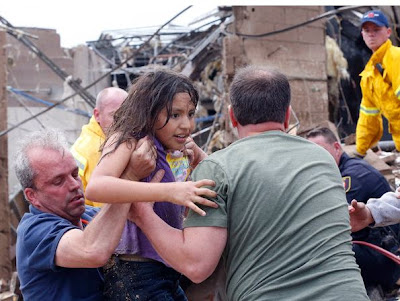 A young girl is pulled from the rubble of the tornado devastated Plaza Towers Elementary School in Moore, Okla., on May 20, 2013.
******* 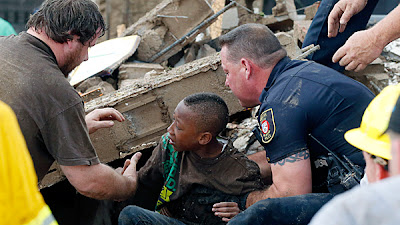 Emergency first responders pull a young boy from the wreckage of Plaza Towers Elementary School in Moore, Okla., following the May 20, 2013 tornado.
I don't know how I would react if I were in a situation such as this. I can't image a building I'm in collapsing around me and injuring / trapping me. To go from the ordinary to the extraordinary / life and death in seconds is hard to fathom.
*******

But the national / Federal response will also make no difference in the deeply toxic and cartoonish political climate of the country or the crude libertarianism and religious fundamentalism / rightwing kookery that imbues these reddest of red states and the response of their politicians (who mostly merely represent their views) when a disaster hits some other part of the country. 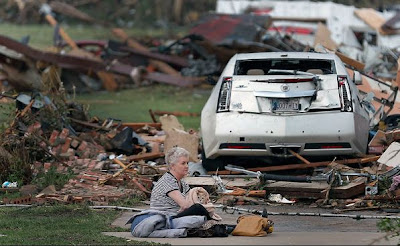 
And never mind how many of the folks in Red America who were deep inside the rightwing media/entertainment machine's Alternate Bubble Reality when this reality struck. And I suppose this Alternate Reality will immediately return the moment the disaster has past and aid begins arriving. 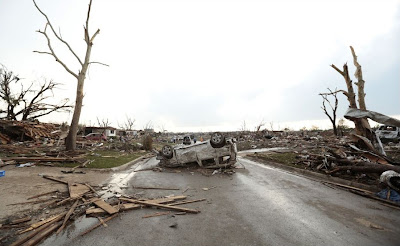 Street-level scene of the utter devastation caused by the tornado of May 20, 2013. It's sort of like everything was in a massive blender.
*******


There is a lot I'd like to say but, obviously, tonight is the wrong time for this discussion. Still, I can't help but feel it, so I just won't continue on with this topic.  Needless to say, the news is hyperventilating over the story as they always do in these situations. And there is the usual American obligatory "God Saved Us / Our Faith Is Unshaken" stuff. Well, I guess if it gets you through something like this, who am I to take issue with that?
As for the Weather Channel, oh, never mind ... 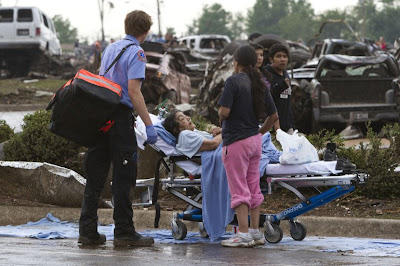 An elderly woman is evacuated from the damaged Moore Medical Center in Moore, Okla., following the May 20, 2013 tornado.
*******


More importantly, though, maybe, just maybe, some of these folks will remember the help that they get the next time a Superstorm Sandy or a Hurricane Katrina hits an "OTHER" part of the country, and they and their representatives in Congress won't begrudge their fellow Americans aid or tie it up in bullsh!t political games. And just maybe there will be a tad more compassion all around when bad things happen to others who AREN'T related to or just like them. Just maybe. 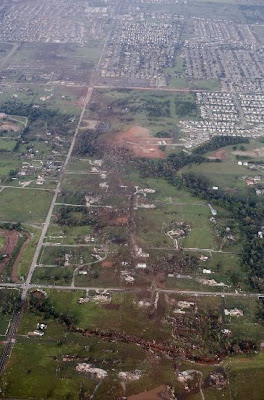 As for the tornado itself, apparently it had a 20 mile track and was at least 1 mile wide as it tore through Moore. As for winds, the NWS is reporting about 200mph or an Enhancee Fujita (EF) rating of 4 or 5 (EF-4 / borderline EF-5) which is substantially less than the Moore, Okla., May 3, 1999 tornado when 300mph winds were (somehow) clocked in the strongest tornado on record. However, this tornado appears to have been much wider and destroyed a far bigger area.  In addition, the 1999 tornado was based on the original Fujita scale, which was somewhat different than the revised EF scale so the "speeds" don't automatically compare. 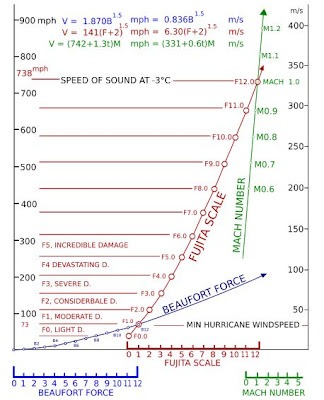 A schematic diagram of the original Fujita Scale, the Beaufort Scale for wind, and Mach numbers.
Of note, tornadic winds much above 300mph (which really don't occur on Earth under "normal" circumstances) would be impossible to measure since the original Fujita scale runs all the way up to F12 (the speed of sound, Mach 1.0) but all "F" and "EF" numbers are determined after the fact by the damage. For winds over 300mph the obliteration is basically complete so (were they to occur and we hope not) you can't tell an F-6 from an F-7.
One thing I'll say: It's amazing how violent the weather can be in the American Great Plains. Here is a photographic slide show of many more tornado damage and injuries.
*******

Updated shortly after I posted entry ... 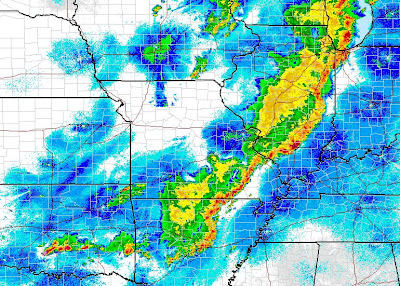 Here is the 0518 UTC (1:18AM EDT/12:18AM CDT) radar mosaic image of the central United States showing the squall line passing through the mid-Mississippi River valley and located well east of the actual cold front back over the Great Plains. It has cleared out from the Oklahoma City area at this hour.
Most of this likely will dissipate by the time it gets to the U.S. East Coast.
*******


I was going to post another entry but it's already too late. My workday was fine (computer issue no problem) and I was busy. I also had a very good gym workout tonight. It's a warm, muggy night here in D.C. and around the area but still no needed rain showers.
--Regulus
Posted by Regulus at 1:07 AM