The Ascent of Man -OR- The Human Race 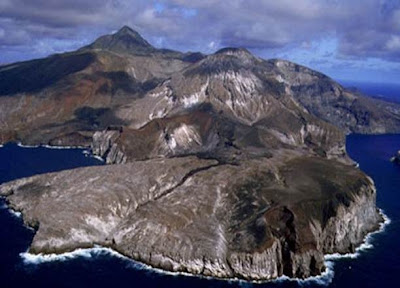 Aerial view of remote Ascension Island in the equatorial waters of the South Atlantic Ocean.
*******


I wasn't going to update the blog today but given what happened in Boston today, I felt it necessary. 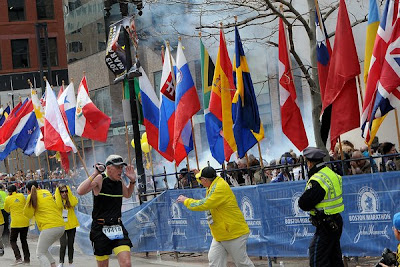 A Boston Marathon runner reacts to the first of the two explosions that occurred at 2:50PM EDT close to the finish line in a domestic terrorist attack on the legendary race (now in its 117th year).
*******


In what was almost certainly a terrorist attack on U.S. soil today, two crudely made (pipe? pressure cooker) bombs detonated about a block apart in downtown Boston by the finish line of the Boston Marathon shortly before 3PM EDT today, killing at least 3 people and injuring about 110 170+ others, some quite badly.
One of those killed was an 8-year old child. It was a horrific scene captured on video and camera. The bombs detonated as runners were crossing the finish line at 4 hours and 9 minutes into the race (which was subsequently cancelled). 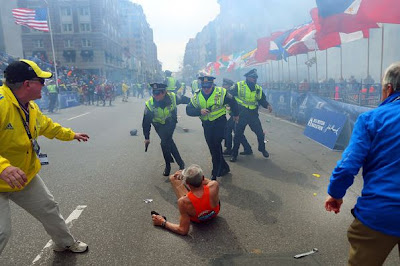 A runner falls from the blast wave as police react and chaos erupts just seconds after the twin explosions at the Boston Marathon today, April 15, 2013.
*******

The New York Times reports it as follows (link here):


"Two powerful bombs exploded near the finish line of the Boston Marathon on Monday afternoon, killing at least three people, including a child, and injuring at least 100 as one of this city’s most cherished rites of spring was transformed from a scene of cheers and sweaty triumph to one of screams, bloody carnage and death. 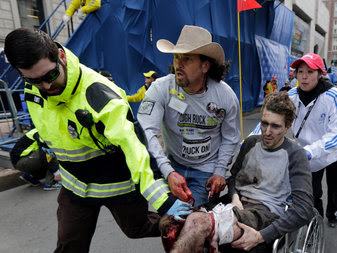 
"About three-quarters of the 23,000 runners who participated in the race had already crossed the finish line when a bomb that had apparently been placed in a garbage can exploded in a haze of smoke amid a crowd of spectators on Boylston Street, just off Copley Square in the heart of the city. It was around 2:50 p.m., more than four hours after the race had started, officials said. Within seconds, another bomb exploded several hundred feet away." 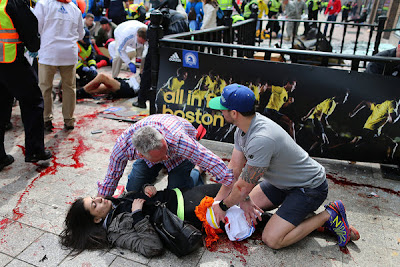 A seriously injured woman is tended to amid a scene of carnage at one of the two blast sites at the Boston Marathon today, April 15, 2013.
*******


This is, obviously, a huge story and is garnering blanket coverage at the present time. Given that it was almost certainly a terrorist attack, it isn't clear if it was rightwing domestic terrorism or Islamic / foreign terrorism, or maybe it's some other group or deranged lone individual. This year April 15th is Patriots' Day in Massachusetts, a major holiday in parts of New England, and April 15th is also "tax day" when Federal taxes are typically due, but any connections are just speculation. 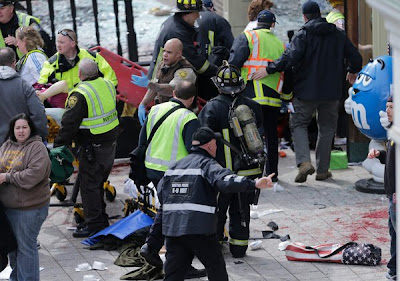 Another image of the scene at one of the two explosions at the Boston Marathon, April 15, 2013.
That blue M&M statue makes the whole scene surreal.


The FBI is leading the investigation along with state and local police and authorities. President Obama said the perpetrators would feel the "full weight" of American justice. 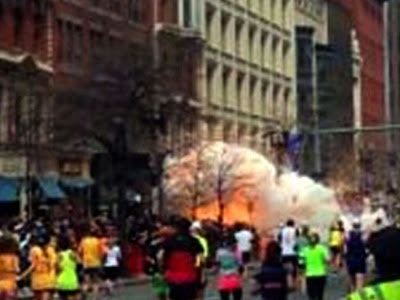 
This event has really shocked Boston. As of tonight, a 15-block radius around the bomb sites have been sealed off as a crime scene. 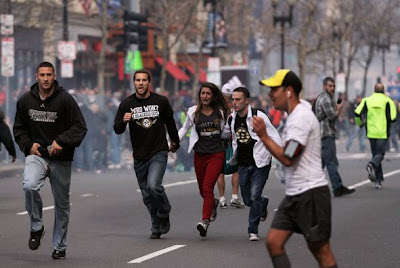 
I also want to note that my friend A. and her group went to Boston for the occasion of this event, but owing to a bad incident on Saturday night (Sunday morning) involving N. , they were not even in the city. He is presently recovering at home (his parents live in eastern Massachusetts) and he should be OK but he won't be back in D.C. for at least a week or maybe longer. Poor guy. 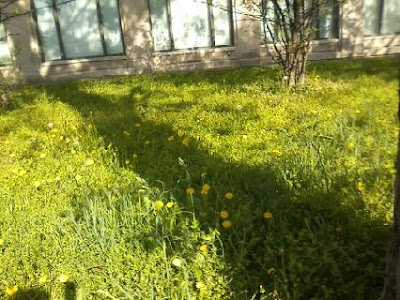 
On a completely different note, I actually had a good day at work. Not only did I get in early (for me) but I made progress on the second of the 10 geothermal technical working papers, in particular, the technical / technology section write ups. In this case, I'm editing / rewriting an existing draft rather than writing it from scratch. 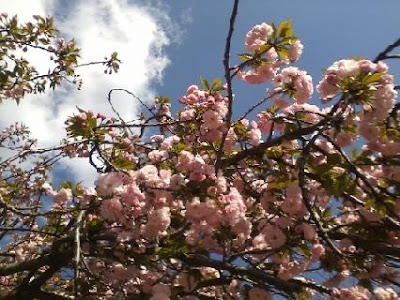 A double-flowering Kwanzan cherry tree in full floral bloom at the corner of T and 16th Streets NW, Washington, D.C., 4:37PM April 13, 2013.
I've recently written (as in my previous entry) a great deal with lots of pictures about theYoshino cherry trees that were in bloom last week, in particular those on the Tidal Basin. But the Kwanzan -- whose name is not African but rather (I think) a variation of the Japanese word "Kanzan" -- is actually my favorite blossoming cherry tree. I think its flowers are much prettier. They typically bloom about a week after the Yoshinos.
*******


I also went to the gym tonight and had what might have been among my best workout. I jogged for 5.3 miles on the treadmill (in an 11 minute and 46+5 minute intervals); spent an hour weight-lifting (which I'm really feeling tonight); and swam for about a half hour. Also, my weight in just my bathing suit on the big scale was 156.5 pounds, so as I've written before, I am definitely down by half the nearly 60 pounds I gained between 2003 and 2012.  I'll go to the gym again on Wednesday. 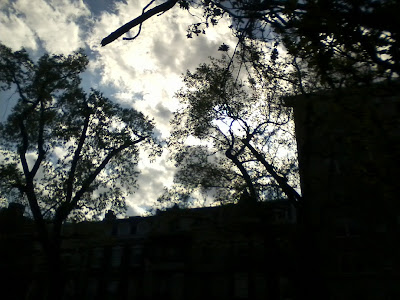 
OK, that's all for now. My next planned update will be on Wednesday night.
--Regulus
Posted by Regulus at 11:54 PM