Winter’s Retrial; Awaiting the Acquittal of Spring -OR- Some Notes from the Planet Floor 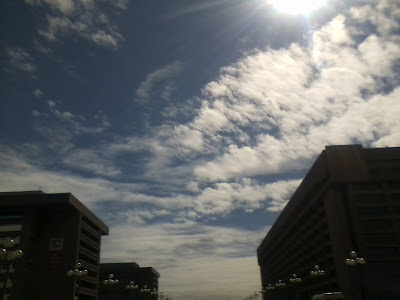 The midday sky as seen from L'Enfant Promenade looking south, Washington, D.C., 2:10PM March 12, 2013.
This is one of those pictures that creates a sense of the enormity of the vaulted blue sky and the various kinds of clouds that can fill it and how the light from the Sun shines down upon the floor of our planet.
*******


This is just a really quick update to note a few things ...
First, I updated my previous blog entry about my Uncle Richard to include another photograph. It was actually taken back in Sept. 2008 on a trip to New Jersey with my dad.
******* 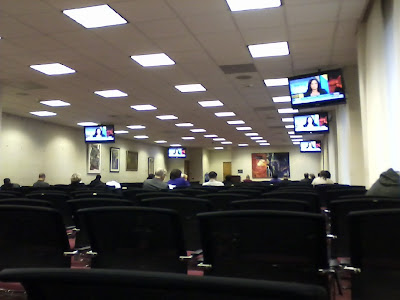 Early morning in the juror lounge, H. Carl Moultrie Courthouse of the Superior Court of the District of Columbia, Washington, D.C., 8:14AM March 18, 2013. I had to sit in the hallway to get away from those infernal TVs -- all of which were tuned to CNN (the main American version).
*******


Secondly, jury duty was a bust in that I was not called but instead sat around until nearly 245PM (less an hour for lunch). I made it to Superior Court by 745AM -- after getting up at what for me is the incredibly early hour of 6AM (actually, 626AM). It was an unseasonably cold and gloomy gray morning with snow showers (see weather discussion below).
There was a request for a grand juror but I did not volunteer for that (I don't think anybody did). It meets 9AM - 5PM Monday - Friday starting March 18th and running through April 19th. Yikes. 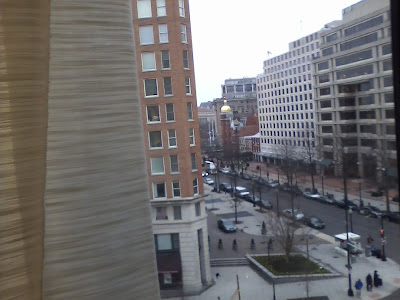 The view from the 3rd floor of the D.C. Superior Court juror lounge looking west along Indiana Avenue NW (with the gold-domed old Fireman's Insurance building visible at 7th Street NW), Washington, D.C., 8:14AM March 18, 2013. It was snow flurrying at that point.
*******


So I guess no more jury duty for me for at least 2 years and a day.
I'm actually quite tired right now at the 11PM hour. Although I did not go into work today, I still made it to the gym for the second day in a row. While yesterday I had a 4.44 mile / 48 minute jog (with additional 5 minute cool down) and a good swim, today I had a 4.02 mile / 45+5 minute jog, some time on the elliptical trainer, and about 45 minutes of weight-lifting (on the machines). I wasn't able to go to into the pool because it was too crowded.
Last night, I went to Nellie's and then briefly to Larry's Lounge. Tonight, I had a solo dinner at Dupont Italian Kitchen rather than grocery shopping. 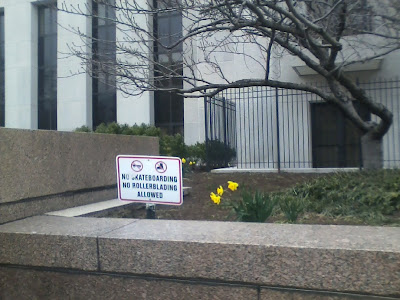 Daffodils quiver in the breeze on a cold March day grow beside a sign warning people not to skateboard or rollerblade on the east side of the Moultrie Courthouse Building (the Family Court side where it is typically easier to enter through security), Washington, D.C., 1:28PM March 18, 2013.
*******


Updated 9:19AM 3/19/2013 to show full March 18th, 2013 regional airport climate station daily numbers.
Turning to the weather, it was unseasonably chilly and showery today with a high fully 17F below normal at KDCA (40F versus the normal of 57F) and an average temp. (through 5PM) -10F below normal. It actually was snowing a bit this morning when I left the apartment but it later became a chilly drizzle and then a showery rain with the following through midnight: 0.32" at KDCA; 0.39" at KBWI; and 0.46" at KIAD. 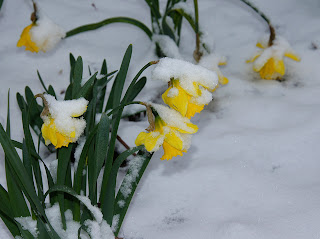 
Looking ahead, a cold and wet pattern is forecasted to remain in place for the next 5 days across the mid-Atlantic and indeed a significant portion of the Eastern and Central United States. Oh, and there is a chance of a coastal storm on Monday that would -- ohhhh, never mind. I'm sick of that game already.


Fantasy March snowstorms for Washington, D.C., aside, the long story short is that this March is proceeding radically different from last March 2012 (when the whole month averaged a whopping +10.1F at both KBWI and KIAD and +10.0F above normal at KDCA), and at least preliminarily the summer pattern for this year looks quite different from the past three summers here. 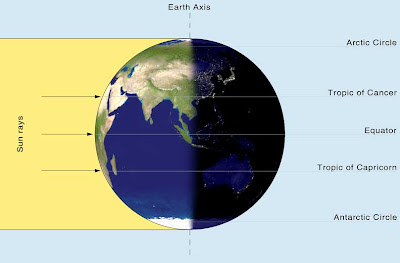 The first day of astronomical (seasonal) spring -- the vernal equinox for the Northern Hemisphere --  is March 20th, 2013 at 7:02AM EDT (11:02 GMT).  The actual "equal day / equal night" point here in Washington, D.C., has already passed (it basically occurred between March 16th and March 17th). There are reasons for this as well as why the earliest/latest sunset and sunrise times do not occur right on the respective solstices. 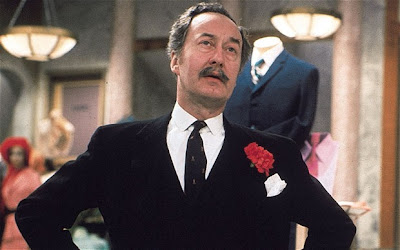 Lastly, I wanted to note the passing of British actor Frank Thornton, best known for his roles in Are You Being Served? (and its Grace and Favour / Are You Being Served? Again! sequel) as Captain Peacock and Last of the Summer Wine as Herbert "Truly" Truelove. He was 92.
Here is a nice obituary in the UK Guardian. 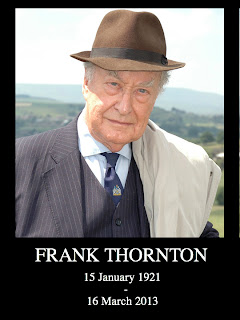 "[Thornton] was 51 when David Croft, producer of another long-running British staple, Dad's Army, remembered the tall, long-faced actor from another engagement and decided to cast him as the dapper floor-walker in charge of shop assistants played by Mollie Sugden, Wendy Richard, Trevor Bannister and John Inman in the Grace Brothers department store of Are You Being Served? (1973‑85). Thornton's latter-day Malvolio, all pinstripes and impassive disdain, proved a perfect antithesis to the general air of jobsworthy incompetence and smutty innuendo.


"Captain Peacock was ideal casting for Thornton, who went on to appear in all 10 series. For when it came to a sense of the punctilious, the right way to do things, Thornton was your man." 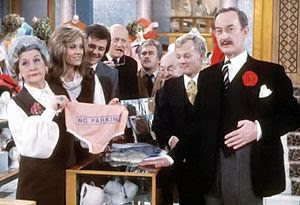 The original core cast of Are You Being Served? Of everyone in this picture, only Nicholas Smith ("Mr. Rumbold") is still alive.
*******


OK, that's all for now. I had intended to post more including some political commentary but it's too late, and I need to go to bed. My next planned update may not be until Thursday night.
--Regulus