SNOW-QUESTRATION -OR- A Late Season (March) D.C. Snowstorm to Remember 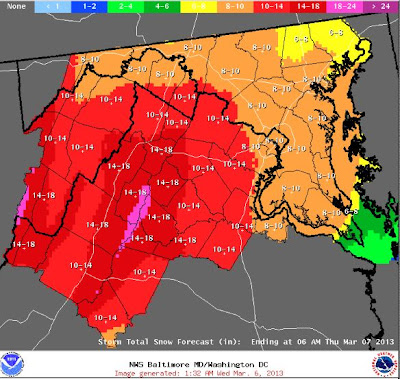 
OK, the weather forecast has undergone a dramatic change with a colder and much snowier solution for the immediate Washington, D.C., area and a winter storm warning now in effect for the entire region including St. Mary's and Calvert Counties (where earlier today at one point NO advisories were in place) and the closer in eastern suburbs such as Prince George's and Charles Counties (where earlier today it was just a winter weather advisory).
I knew something was up when on the channel 7 (not 4!) news tonight seen from Larry's Lounge, Bob Ryan looked grim and spoke in terms of "heavy snowfall" and 10" accumlations in the immediate D.C. area. 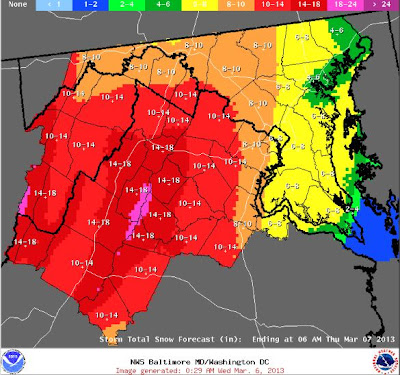 Here was the same snow map forecast for the LWX CWA just a short while ago for the same ending period but issued at 12:38AM March 6, 2013.

Between this map and the one directly above it, the two tell you that the situation is changing quickly toward heavier snowfall totals (quickly approaching 1 foot even in the D.C. area).
*******


That was all I needed to hear. I knew when I went to the NWS site after a few hours absence, I would see what I had hoped.
The basic reasoning is the same for the "Snowquester" / "Saturn" storm with a primary low moving across Kentucky and an upper level low over Iowa earlier this afternoon having transferred their energy to a rapidly deepening low over North Carolina moving toward the Tidewater / Norfolk area, and an area of strong isentropic lift over the D.C./Baltimore area creating moderate to heavy precipitation by early morning and lasting until evening. 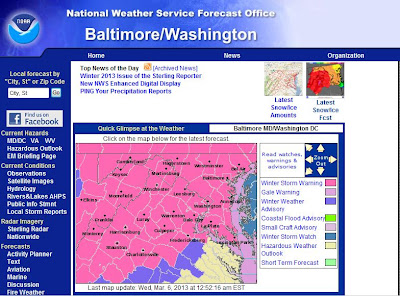 
The low is forecasted to pull away with strong and gusty winds "backing" from east to northeast to north by nightfall. There may be additional wraparound precipitation with a deformation zone along the Chesapeake Bay.
HOWEVER, the change in thinking is that the 850mb 0C isotherm and rain/snow line has moved into a much more favorable location well to the southeast of the D.C. area. The result is that the forecast is now mostly snow. 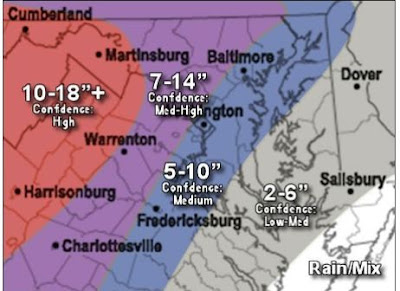 
I'm not sure what the big change was -- it seems to be the GFS output in its most recent (0Z) run. This model had been showing a "warmer" solution and was the one being accepted (implicitly) by the NWS (especially Sterling/LWX) over the relentlessly colder / wetter (i.e., much snowier) NAM and Canadian (and ECMWF). But it finally flipped in the 0Z 03/06/2013 run. Or maybe the model output statistics (MOS) numbers were finally somehow discounted for an unusual event such as this. 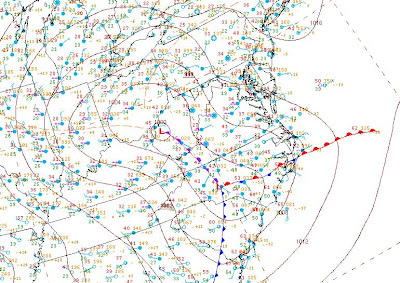 Of note, we need 13.9" to reach the current 30-year seasonal average of 15.4" at KDCA. That amount is not forecasted right but, but this storm is very energetic and the NAM and Canadian models have been screaming it for days, so who knows. 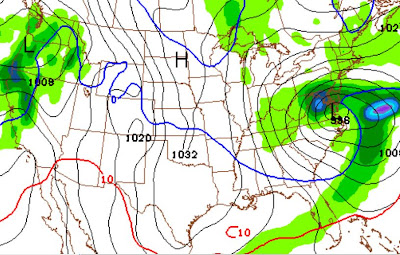 
OK, that's all for now. Again, for real-time updates on the snowstorm, see the Capital Weather Gang blog. And for weather advisories / forecasts, see the Sterling / LWX site. 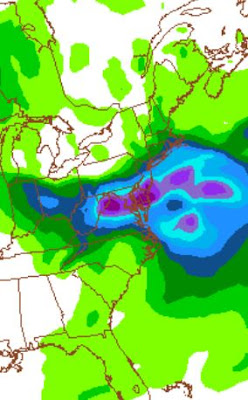 As for tomorrow, I think it's a safe bet that everything will be closed including the Federal Government. If all goes well with the snow, I will go to Andrea and Imara's place tomorrow afternoon and then return to go on a "bar circuit" from Nellie's to No. 9 to Larry's Lounge, or at least some portion of this plan.

I am home right now. Gary and I were at Larry's Lounge earlier, where we talked about the weather and -- upon watching Bob Ryan on channel 7 (neither of us have an iPhone / iPad with internet access). Seeing that update, it was reminiscent of the Jan. 24, 2000 snowstorm in terms of a rapidly changing situation that we "sensed" despite the forecast.
******* 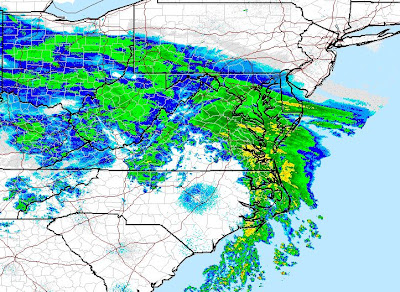 
Oh, yes, I got a copy of my credit report from Experian -- after paying nearly $40 for a full-blown credit report with credit scores from the unholy alliance of three agencies. This report was far superior in content to the "free" one I got yesterday from the website AnnualCreditReport.com, and it showed "scores" of 607 - 590 - 607 (Equifax was the lowest). I noted that two of my long-since-consolidated student loans are showing up as "delinquent" -- which might explain the extremely low rating. Anyway, I will be writing all three of them about this.
OK, that's all for now. I should have a new update posted later today.
--Regulus
Posted by Regulus at 1:53 AM