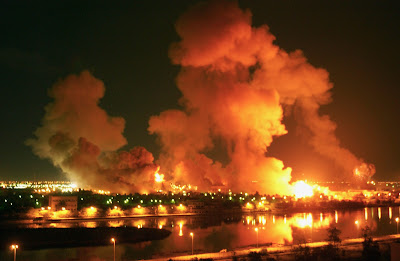 
I just wanted to note that tonight is the 10th anniversary of the start of the Bush / neocon Iraq War catastrophe, among the greatest foreign policy blunders ever in the U.S., and though the same cabal and their media cheerleaders and enablers are still around and given prominent perches from which to spew. 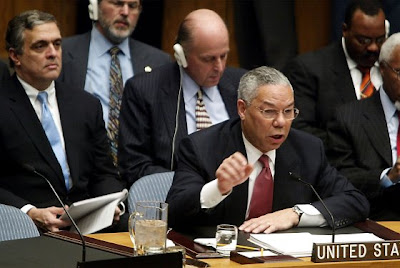 Then-Secretary of State Colin Powell -- who actually knew better -- addresses the United Nations Security Council on February 5, 2003 in which he recites the Nigerien "yellowcake" uranium hoax, itself a central part of the Iraq is building WMDs lie, that was used as a Bush pretext for a war of aggression.
*******


It's hard to describe the atmosphere back then -- still raw and fearful after the 9/11 attacks with Bush & Co. exploiting it viciously to start a war against a nation that had nothing to do with what happened and posed no real national security threat to the U.S. or its interests. 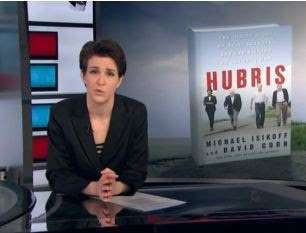 While progressive commentators* and even some regular journalists have written about this -- including the MSNBC top talent nightly lineup, in particular Rachel Maddow (whose February 2013 series Hubris: Selling the Iraq War based on the book of similar title by Michael Isikoff and David Corn is a must-see) -- have been all over this story in the past week, those that brought the disaster were also out making the rounds and/or tweeting about how everything is just great.

A somewhat contrived "iconic" moment in Iraq as a statue of Saddam Hussein is pulled down by U.S. forces in Firdos Square in Baghdad, April 9, 2003.
*******


I refer to Paul Wolfowitz and Donald Rumsfeld** (Cheney has also made comments in the past few months to the effect that everything turned out terrific and he'd change nothing), not to mention that pimped out think tank "scholar" Michael O'Hanlon.
This complete lack of introspection, not to mention living in an alternate reality, is very much the hallmark of the GOP in 2013 on pretty much every issue, in part due to the media-entertainment complex that has taken over the party itself and drives it. A British soldier jumps from his tank in a petrol attack on his convoy in Basra, Iraq, September 2005.
******* 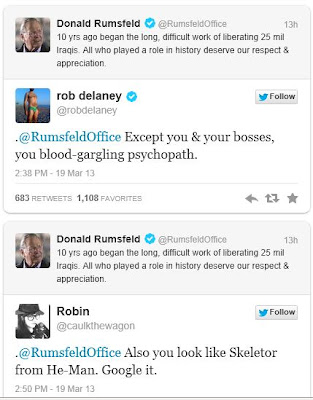 **Rumsfeld's vulgar and provocative tweet today garnered an appropriate response -- not that it will make any difference.

As for George W. Bush, the crusading War Hero with a hot line to Jesus, he just lives in his splendid isolation these days painting weird pictures.


For me, the worst behavior of all was exhibited by the D.C. media and pundit circle jerk crowd centered at Beltway Received Conventional Wisdom / Washington Consensus Central: The Washington Post Editorial Board (and the stable of op-ed columnists) plus David Gregory and late Tim Russert

And while a few of the names have changed -- Ruth "Mother" Marcus in place of Ben's Chili Bowl Wittes, Editorial Page Editor Fred Hiatt was there in 2003 and he's still there in a Zen-like state of "Professional Centrism," now obsessing about Social Security and how to slash it ("entitlement reform") in order to give the GOP its dream corporate oligarchical over-class / wage-slave underclass state.


And the neocons are still in D.C, given prominent "voice" on the op-ed pages or on the mind-numbing Sunday talk shows, banging the war drums for new imperialistic misadventures in Iran, Syria, and even North Korea. 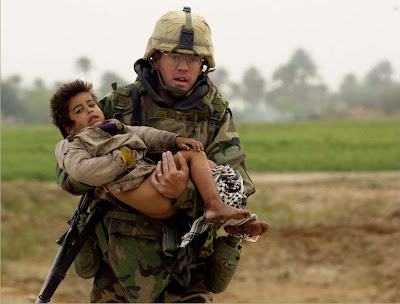 This was one of the iconic photos of the early Iraq War: Private First Class Joseph Dwyer carries a young Iraqi boy injured during a battle between the U.S. Army's 7th Cavalry Regiment and Iraqi forces near Al Faysaliyah, Iraq on March 25, 2003. As for Dwyer, tormented horribly by what he experienced in Iraq, died in July 2008 of a strange and slow-motion suicide.
*******


There were two articles in the Huffington Post linked here and here about the media's role back then and whether or not it could happen again (answer: absolutely yes).

My personal antipathy for The WaHoPo -- and why it is The WaHoPo instead of The WaPo -- is due to the editorial board's inexcusable dismissal of the Bush election theft in 2000 and the paper's overall Iraq War travesty, banging war drums and acting as a conduit for misinformation and lies in its news and editorial / op-ed section.

Here is a piece entitled "Marches of Folly" written by Paul Krugman that appeared on Monday 3/18 in the print New York Times. It builds on his recent blog entry. The Monday op-ed column online version includes a link to Howard "Mistah" Kurtz's uncharacteristically provocative piece in The Daily Beast: Media's failure on Iraq still stings.

I say "uncharacteristically provocative" since Kurtz is basically Mr. Received Conventional Wisdom himself.


I'd also like to link to Jonathan Chait's take on it. His mea culpa for having supported the war is somewhat different and more limited than other progressive writers. Read why here.
This is far too big a topic to address tonight, so I just wanted to mention it. There is no shortage of information or pictures you can find. 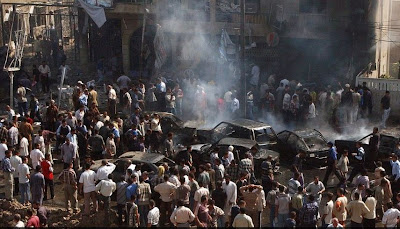 One of countless car bombings in Iraq in the mayhem that ensued.
*******


I wanted to post this piece in Salon entitled "Iraq War, by the Numbers" by Natasha Lennard. Of note, the total civilian casualty figure could be as high as a million -- no one counted -- and the total US expenditures so far are in other studies are put over $2 trillion. 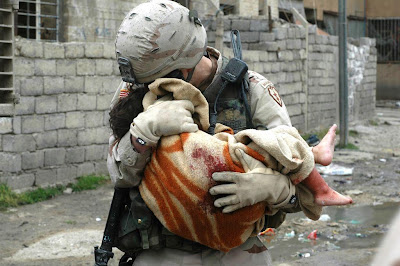 A soldier holds a dead Iraqi girl in Mosul who was killed in a war that did not have to happen.
*******

Number of years since the U.S. invaded Iraq: 10
Number of Iraqi civilians dead as a consequence: At minimum, between 123,000 and 134,000
Number of Iraqis internally displaced or who fled the country: 2.8 million (that’s one in 12 Iraqis)
Number of U.S. troop casualties: 4,484
Number of coalition troop casualties: 4,803
Number of U.S. troops wounded: 32,223
Number of non-Iraqi contractors killed: at least 463
Number of Post-Traumatic Stress Disorder diagnoses in U.S. service members: 103,792
Number of bombs dropped in Shock and Awe Campaign: 4,845
U.S. financial cost so far: $1.7 trillion
Amount owed to U.S. veterans in benefits: $490 billion
Predicted cost to U.S. over next four decades: $6 trillion
Cost of U.S. reconstruction efforts: $60 billion
Amount of reconstruction effort funds wasted: over $8 billion
Halliburton overcharges classified by the Pentagon as Unreasonable and Unsupported: $1.4 billion 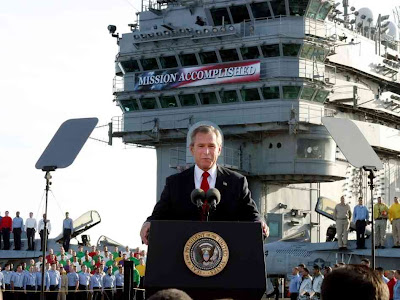 President Bush gets to play make-believe war hero under the notorious "Mission Accomplished" banner on the USS Lincoln on May 1, 2003 -- just as Iraq was descending into hellish chaos.
******* 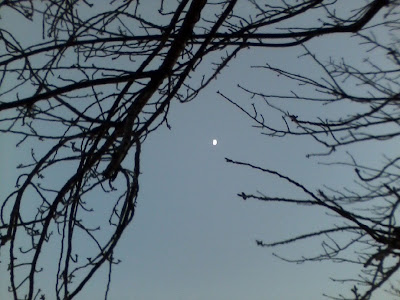 OK, that's all for now. I ended up taking the computer home tonight and once again had a good gym work out (including 4 mile jog and some weight lifting combined with a partial session with T.) and capped with a half hour swim in the pool.
I'm not taking the computer home tomorrow (Wednesday) after work and possibly not on Thursday, so my next update may not be until Friday evening.
--Regulus
Posted by Regulus at 2:25 AM