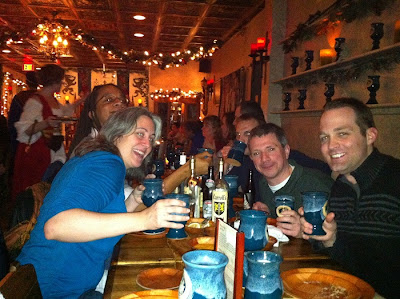 
So as I mentioned in my Saturday night entry, on Friday night I went to the regular Medieval Madness event in Old Town Alexandria. I went with Andrea, Imara, Nick, and Jake. The pictures in this entry are from that night including both on the trek there with Andrea after work and then at the event.
I'm posting the main photos from the event (which Nick took or had taken with this iPhone camera) without any captions. My regular readers know who I am. 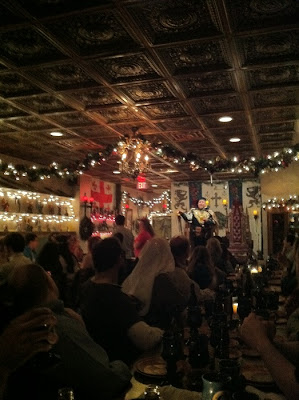 The interior hall where the Medieval Madness is held in Old Town Alexandria, Va.

The event is actually held three or four nights a week (with two Saturday shows, owing to its popularity). People attend in groups (usually five or six). What is Medieval Madness? As described on the website: 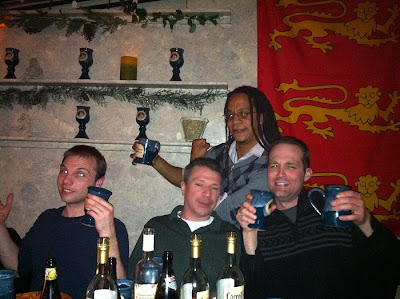 "Medieval Madness is a memorable, fun night out of political satire set in 15th century England. It's fair maidens with food and ale, song, comedy, Europe's finest ale and real sword competitions. It's short bursts of entertainment. It's fellowship and fun with friends old and new. It's a revolution in the arts, the only destination which joins so many artistic disciplines into one powerful night, the only destination which produces brand new shows every four months. Join the revolution and partake of the fun!" 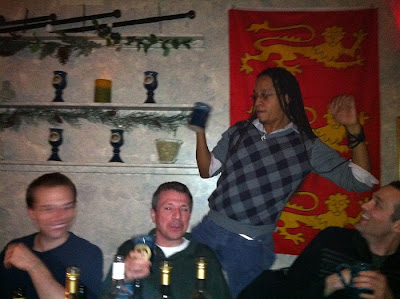 One item I would like to note, though, is the use of the term "Medieval" for the 15th Century in England that I well remember from my weird and ultimately pointless "semester" in one of those quasi-pseudo Oxford "experiences" back in the first four months of 1990. As background, I went for one "term" to a place (along with a bunch of other dumb American college students) that was "affiliated" with Keble College, one of the 38 colleges (plus 6 "PPHs") that collectively make up Oxford University. 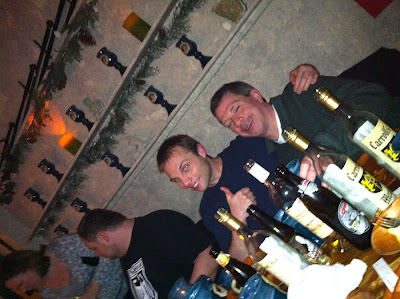 
That "semester" has long since vanished into nothingness in terms of transcripts or credits (which I hardly needed in my 100+ college courses over an undergraduate and three graduate degrees and over $250K in student loan debt (and relentlessly rising). But I did learn some interesting things (and read things such as Sir Gawain and the Green Knight, the Mabinogion, and some writings of Geoffrey of Monmouth, as well as Dante's Divine Comedy; and I saw some castles and places in southern England that I never would have seen otherwise; and as for the money, well, my dad just paid for that semester outright).
Anyway, all of that was a big lead up simply to say that the "Medieval" period ended in England by the mid-15th Century. By contrast, in Russia, it seems to have ended around 1918. 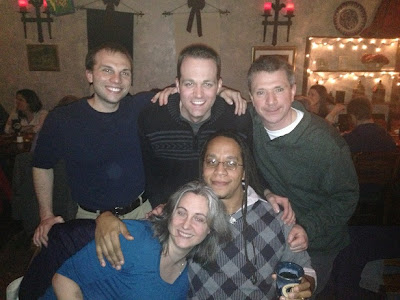 As for Medieval Madness, while the cuisine and drinks were were all "period" items (and I was the ineffectual "keeper" of the salt shaker), the plumbing, sanitation, and hygiene were still 21st Century American ...
And there you have it.


Oh, yes, the only thing I couldn't get into was screaming out (in unison with the group), "WENCH!" to get the servers' attention. 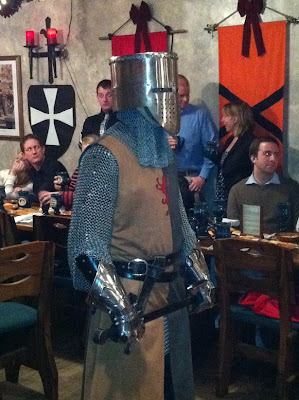 One of the two swordsmen who performed a duel that a group of attendees got to judge. There was no way I could have so, as I simply couldn't follow all the moves and who hit the other where.

Now the event ain't cheap -- tickets alone are $59 although there are Groupons that cut the cost in half.


In addition, the ales, lagers, wines, and meads for purchase can be a bit pricey (though you get two free ales or one glass of mead). However, given the amount of food associated with the dinner (including bread, blue berries, sausages, roast beef, chicken, and pound cake) and the show that accompanies it (culminating in an actual sword duel -- see above image) the whole experience is worthwhile. 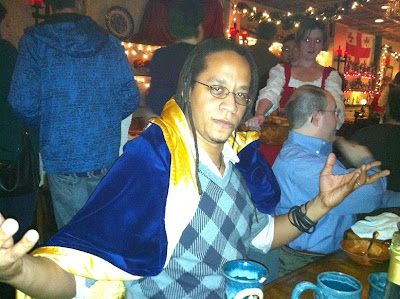 In my case, I was filling in for another person who didn't go and Nick simply gave me the ticket and he didn't want any money. However, I did buy him some drinks in return and joined others in buying bottles of wine, er, mead for the table. In all, I spent a bit under $81 plus a $15 tip.
The remaining pictures in this entry were taken by me before and after the Medieval Madness event. 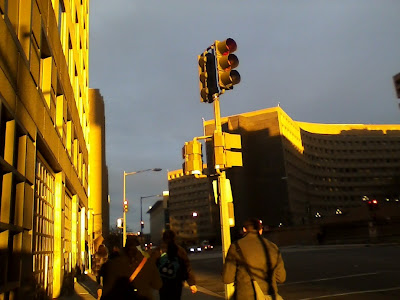 Golden yellow-orange sunlight from the setting Sun illuminates the buildings around L'Enfant Plaza (yesterday's tomorrow, as I like to call it) while creating a somber blue-gray contrast with the low clouds in the sky; Washington, D.C., 5:46PM March 8, 2013.
*******


The mead we had was Carroll's (Andrea bought the first one and we took turns buying more). As advertised on the bottle, Carroll's Mead is a "honey wine," but the way the "Duke" explained it to the assembly is that mead is not a wine nor a beer -- rather, it's simply mead.
Apparently, Carroll's Mead is the oldest such mead made / bottled in the United States. 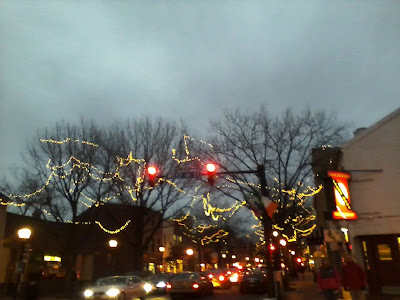 
We sat at one of the two long parallel tables in the hall. It is located at 1121 King Street.
After the event, we walked around Old Town -- first down King Street to a crowded upstairs Irish bar filled with young people, and then headed back toward the Metro, but first stopping at Joe Theismann's Restaurant for a night cap shot and drink. It's located on "Diagonal Road" across from the King Street Metro station. We were all fairly well gone by the time we took the Metro back into D.C. (well, all but the one of our party who lives just past Ballston). 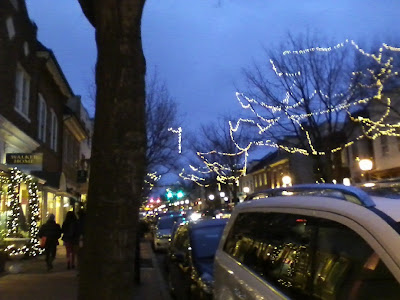 Cloudy gloomy dusk stands in contrast to the bustling and vibrant Friday night along King Street in Old Town Alexandria, Va., 6:23PM March 8, 2013. This is what I meant (see below) when I said Old Town reminds me of Boston, Annapolis, or some such East Coast port town stretching back to the Colonial era.
*******


BTW, Old Town Alexandria on a weekend night is quite festive and crowded. And at gloomy dusk with the street lights and decorative tree lights and late 18th Century-style buildings, the place as the feel of Boston or Annapolis (see above picture). Well, I guess if it were Boston, there would be snow on the ground. 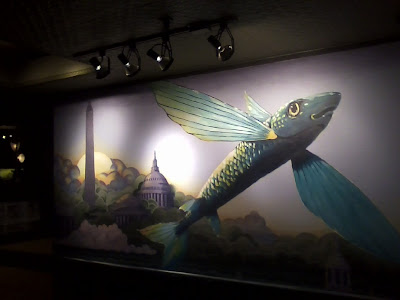 
OK, that's all for now. I had a decent day at work (finishing up an excellent case study on U.S. clean energy sector manufacturing). I then went to the gym where I had a very good work out including 48+5 minutes on the treadmill (4.54 miles / 673 calories); about 45 minutes doing modest to moderate weight-lifting (mostly on the machines); and then swimming in the pool. 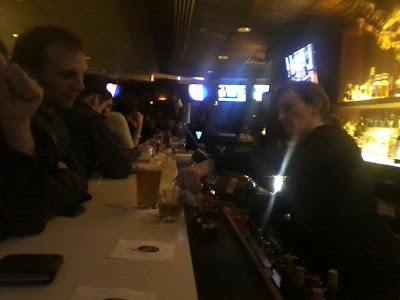 
As for tomorrow, after work I am supposed to attend (with Andrea) that Capital Weather Gang event at The WaHoPo building on 15th Street. It's about the legendary 1922 Knickerbocker Storm blizzard in Washington, D.C., and features Kevin Ambrose, who wrote a book about it. He's also a CWG regular blogger.
My next planned update will be on Wednesday or Thursday.
--Regulus
Posted by Regulus at 1:44 AM