Surface pressure over parts of North America, the North Atlantic, and Greenland in late March 2013 (unsure the day) showing a massive ridge over Greenland associated with the current highly negative Arctic Oscillation. This image came from a Capital Weather Gang entry earlier today (see link below).
*******


This is just a quick update after work since I am not taking the computer home tonight. I am also not going to the gym tonight (I'll go tomorrow night and either Saturday or Sunday, as well as Monday). I am meeting Kristof later at Larry's Lounge, though I may walk home from work via downtown and maybe stop somewhere (Elephant & Castle or Post Pub). 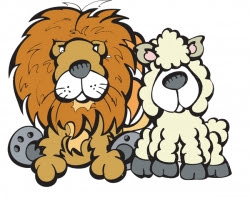 So I just wanted to note that we are in an unusually COLD pattern over the East Coast / mid-Atlantic region for March (and on the first full day of spring). This March is radically different from last March when temperatures averaged for the full month a record 10.0F to 10.1F degrees above normal at KDCA and at KBWI and KIAD, respectively. 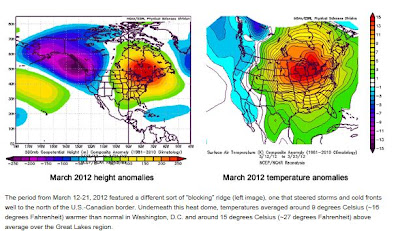 By contrast, here is an image (click on it for larger version) showing the March 2012 height anomalies (left) and temperature (right) anomalies showing. Parts of the Great Lakes region ran 27F above normal for the month. That's insane.
*******


Today only reached 42F at KDCA or -16F below normal and het overall departure for the day through 5PM is -10F. It aws 70F at KDCA last March 21st. KBWI reached 40F for a high (-15F) and KIAD reached noly 37F (-20F) and was also below freezing this morning (31F). All three airport climate stations should go below freezing tomorrow morning. Record lows are unlikely, though (it was just a helluva lot colder in the late 19th/ early 20th Centuries here in March).

Observed Arctic Oscillation (see link below) for four months through March 21, 2013 and the ensemble mean forecasts through the next month. It is presently nearly -6 standard deviations below the mean. Astonishing.
*******


There was an interesting piece on the Capital Weather Gang site today about how incredibly negative the Arctic Oscillation (AO) pattern is right now. (In this case, I think the North Atlantic Oscillation (NAO), which is a kind of "regional" subset of the AO, is also negative, but not nearly as negative as the AO. The two are typically but not always in phase.) 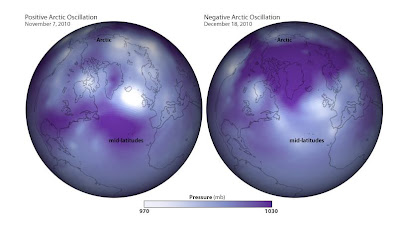 A better schematic of a negative phase Arctic Oscillation and its effects over the North Atlantic, North America, and Eurasia.
*******


The current high over Greenland is massive -- it was analyzed recently (within the past couple of days) at 1074mb (31.72") (see surface map below). For reference, the highest surface barometric pressure ever recorded was about 1084mb (32.01") somewhere near the village of Agata, Siberia on Dec. 31, 1968. (I found another higher reading in Mongolia in 2001 but was unsure of its validity). I can't imagine how cold it was. 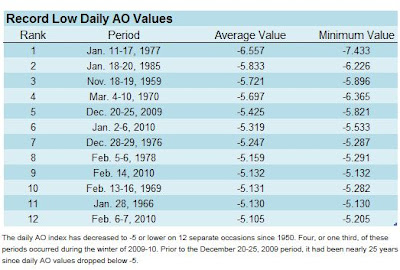 The top 12 record low daily Arctic Oscillation values including average value and minimum value. This does not take into include the current negative episode. Many of these dates were associated with historic cold waves and tremendous snowstorms in the Eastern U.S.
*******


And I'm guessing that would give you quite a sinus headache. Temperatures apparently have also been unusually warm over Greenland -- calling to mind the "flash melting" over nearly all of the Greenlandic ice sheet that occurred last July, though that was in mid-summer. 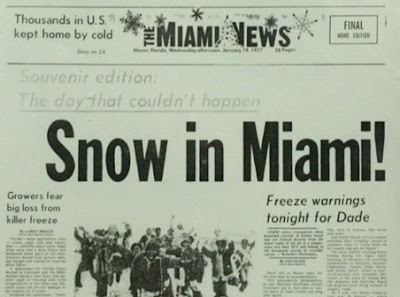 The top negative AO episode in the chart was in January 1977 -- and occurred basically simultaneously with one of the coldest outbreaks ever in the United States with a massive freeze down to South Florida, where snow was reported in many areas on the 19th (although snow never officially fell at Miami International Airport, where it got down to 31F; Fort Lauderdale hit 28F). Above is the headline in the now-defunct The Miami News. You may read more about this Florida cold wave here.
*******


A somewhat speculative topic that is of great interest to me is what would happen if Greenland underwent abrupt climate change with rapid warming / catastrophic breakup of its massive icesheet. The influx of cold fresh water into the North Atlantic could cause another "Younger Dryas" type event. It is for this reason that the quicker global warming / human induced climate change occurs, the quicker the next ice age might come. 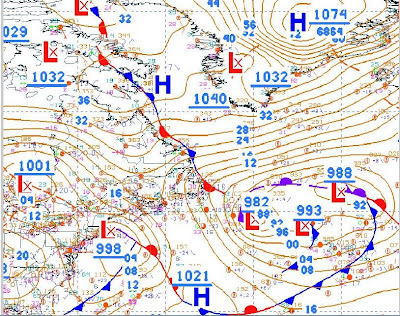 Surface weather map as of late Tuesday, March 19, 2013 over the North Atlantic and parts of North America. The high over Greenland is analyzed at 1074mb (31.72").
Considered in a simplified way, any approaching low pressure (however deep) simply "bounces" off that mountain of air and goes no where.
*******


But that aside, atmospheric conditions over Greenland have a big impact on the weather 2,500 miles away "upstream" along the East Coast of North America including here in D.C. This also includes the Arctic in general and the "sudden stratospheric warmings" -- such as the one that happened in January right as there occurred and that was associated with a wholesale hemispheric pattern change. And the loss of Arctic Ocean sea ice -- the "icy crown" of Planet Earth -- will have significant consequences for the climate. 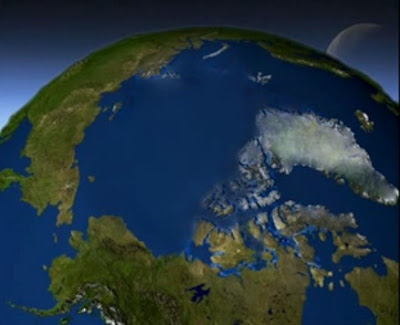 A simulation of a possible not-too-distant future summertime: Planet Earth without its beautiful Arctic Ocean ice cap crown. And it's more than an aesthetic issue -- this would have profound consequences for the climate system. (As it is, Greenland would likely melt enough in such a scenario as to have altered the oceanic conveyor belt with dramatic consequences.)
*******


Anyway, there is another complex low pressure system with two low centers forecasted to move across the Eastern Seaboard by Monday night. 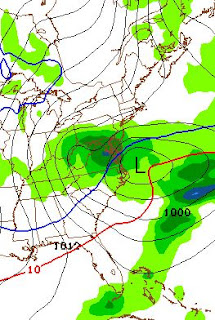 There is a primary low to the west over the Appalachians that should fill and a coastal low. While the rain/snow line / surface 32F line will be within 100 miles of D.C., a significant snowfall event is unlikely. It's just too late in the year.* I'm discounting the NAM and GFS runs whose deterministic run animations show what looks like snowstorms here. The MOS numbers have to be taken into account.


As for the all-knowing ECMWF ("Euro"), I think its most recent run shows it too warm here (as it did in the epic "Snowquester" bust).
*Of course, well do I remember the snowstorm of April 6, 1982, but I was living in New Jersey at the time. I understand D.C. just had flurries (still remarkable for April here).
OK, that's all for now. My next planned update will be my FNMI.
--Regulus