F-You-Or-Get Him and Instead Dancing With Billy Idol

This is the "F/CK YOU" song by Cee Lo Green with its official video. The song is very funny and catchy, and the video set in a diner in the late 1950s or early 1960s is both enjoyable yet poignant for the story of a young man it is telling. (The "clean" version is called "Forget You".)
"I guess the change in my pocket wasn't enough, I'm like f/k you and f/k f/k him too ... I guess she's an Xbox and I'm more Atari ... I pity the fool that falls in love with you ..."
Wholly unrelated, it has been a while since I wrote anything about M. Wade Tipamillyun. 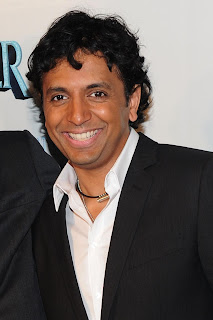 One thing I never mentioned is where I got that nickname -- aside from the obvious tipping reference. It was my adaptation of the really cool-sounding M. Night Shyamalan, the professional name of the Indian screenwriter and film director. Furthermore, given the genre of his movies, my adaptation of it is doubly relevant.


Actually, though, this wasn't even this song I had stuck in my head earlier today. That distinction goes to Billy Idol's "Dancing With Myself". 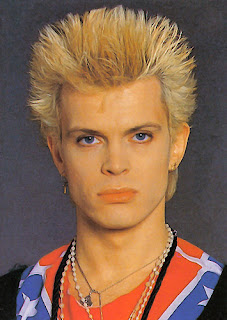 You see, Gentle Reader, I've been on a bit of a Billy Idol kick (his music AND his look, the latter at least how he looked back in the 1970s and 1980s). Indeed, I was listening repeatedly to two songs in particular ("Eyes Without a Face" and "Dancing With Myself") and looking up interviews then and now with him.

I find myself quite intrigued by Billy Idol.


For a punk rocker (and later, as I gather, a New Wave / post-punk rocker), he actually had / has a beautiful deep crooner's voice that you could / can often hear in his songs (when he wasn't / isn't screaming in a sweaty frenzy), and as a young man, he was very handsome -- indeed, he actually had a youthful angelic beauty. 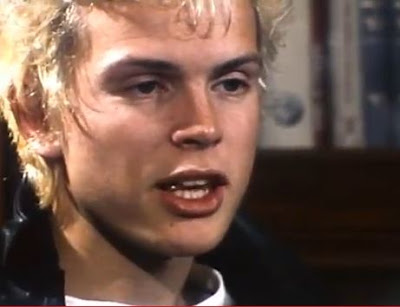 Billy Idol in an interview back in November 1977 on the occasion of his 20th birthday when he was still with Generation X. (Why are his eyes dark brown here but blue in other pictures including the one above? I didn't think color contacts existed back in the early 1980s.)
******* 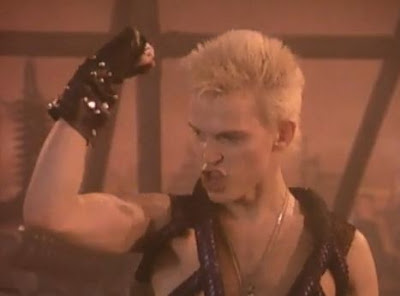 Screen shot of Billy Idol is the music video accompanying "Dancing With Myself" (which apparently was a bit of a remake of the version he originally did as part of Generation X). This video was probably from about 1982 and features as a dancing troupe a popular topic today -- post-apocalyptic zombies.
******* 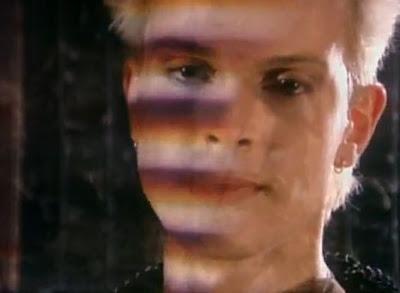 Another Billy Idol / Dancing With Myself music video screen shot. This shows his youthful soft angelic gentleness to which I was referring.
*******


Born William Michael Albert Broad on November 30, 1957 in the Greater London area, Billy Idol never actually married but has two children, a boy and a girl. He lived a rather rough life and now at age 55 doesn't exactly look like this anymore.
Here is the actual "Dancing With Myself" video I found:
"On the floors of Tokyo / Down in London town's a go-go / With the record selection / And the mirror's reflection / I'm a-dancing with myself... 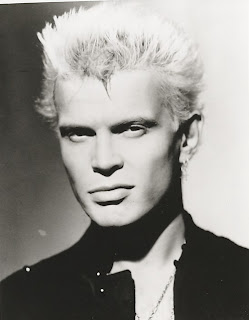 "When there's no one else in sight / in the crowded lonely night / Well, I wait so long for my love vibration / I'm a dancing with myself ...

"So let's sink another drink / 'Cause it'll give me time to think / And if I had the chance, I'd ask the world to dance / And I'll be dancing with myself ..."

As for his 1984 song "Eyes Without a Face", I recall this parody of it many years ago (maybe on Saturday Night Live) when a woman was dressed up as Billy Idol and singing a parody version, "My Voice Doesn't Match My Face".
Ha ha 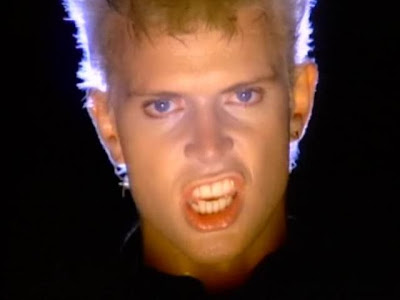 I should have posted a link to Billy Idol's website, so here it is. I had some scripting issues in Internet Explorer but in Chrome it seems to be fine.  I was looking at the Bikes, Busses and Beyond link showing all the concert touring he still does with his band, so he is clearly still quite active.
*******

OK, I think that wraps up my Billy Idol fixation for now. As it is, I need to go to the gym first on this sunny, pleasant Saturday in late March. 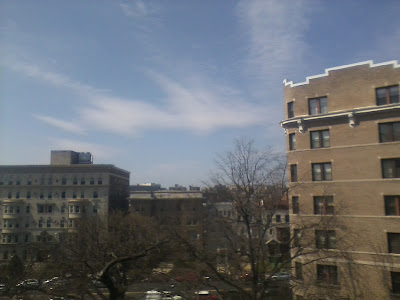 
There is a complex weather system approaching with rain and maybe some wet snow, but we're not going to go down that road. However, I recommend this Capital Weather Gang entry -- not for the content so much as the comment in which the CWG blogger (Ian Livingston) loses his temper with an annoying commenter. But in that forum and given his role, he simply cannot do that, so he apologizes a few times. My comment is also in there (see if you can find it).
--Regulus
Posted by Regulus at 2:56 PM