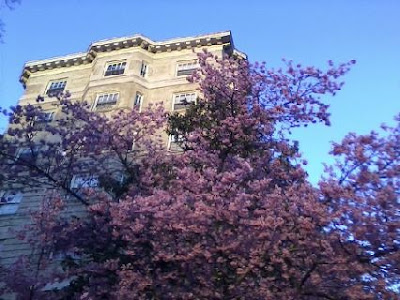 A cherry blossom tree (unsure of kind -- not the "Japanese" (Yoshino) sort) at the corner of 16th and S Streets NW Washington, D.C., 7:02PM March 23, 2013. YES, the cherry blossoms are actually later than "normal" this year --- by which I mean the "normal" of the past 20 years or so.
*******
I don't think I can post much of an entry right now. I just got back from home after a nice night at Nellie's with Gary and then (especially) Larry's Lounge with Gary, Kristof, and Wendy. Yes, I've had several drinks.
There is a complex weather system approaching with the chance of rain AND accumulating snow EVEN in Washington, D.C., proper, but that seems (as ever) a stretch. There was some snow earlier but it's drizzling now -- ahead of the main and complex event. For more info, read the Sterling LWX or the Capital Weather Gang sites. 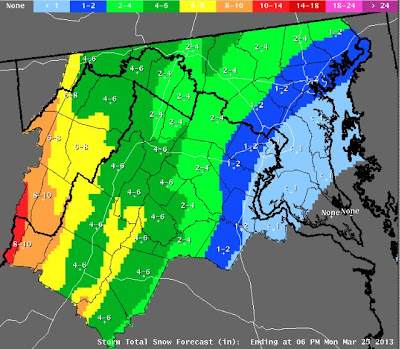 
It's shortly after midnight right now, and I need to go to bed. I have been to the gym the past three days, and I plan to go tomorrow, and then take off Tuesday and Wednesday (the former is also Kristof's b'day, and we may go to dinner).
Anyway, I'm going to bed now. Please read this New York Times op-ed (which appears in Monday's regular print edition) by Paul Krugman: Hot Money Blues. And, as ever, you should read his blog.
As an aside, the members of The WaHoPo editorial board -- i.e., Received Beltway Conventional Wisdom Central -- would soil themselves if that kind of op-ed managed to make it into their print edition newspaper. As ever, that group instead exists in a "professional centrist" think tank reality of "entitlement reform" on the backs of the working class poor, self-righteous fixation on Monica's Dress and the kind of "moral turpitude" morality tales that entails, Free Trade fetishism, and grandiose neocon "nation building" imperialism. 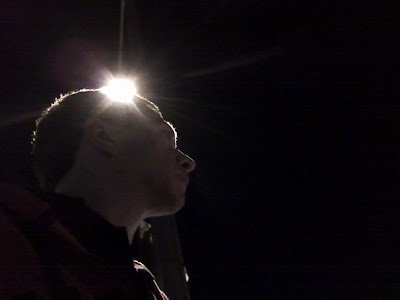 
OK, I have to go to bed now. At this point, I probably won't be updating this blog until Wednesday or even possibly Thursday. Oh, yes, I went to the gym three nights in a row -- including a good workout on Saturday evening and a decent one on Sunday late afternoon, and I plan to go tomorrow night before taking off two nights (on Tuesday and Wednesday.
--Regulus
Posted by Regulus at 12:05 AM