A Fleeting Final Late Season Snowfall in the D.C. City Beautiful and Surrounding Suburbs: A Recap 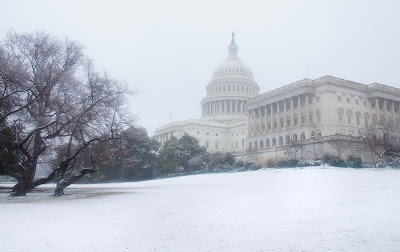 After looking at some nice snowy morning scenes that Kevin Ambrose posted on CWG in this entry, I opted to change my lead image / top image to the one above. He took it yesterday morning probably around 8AM. Though I work relatively close to the U.S. Capitol Bldg -- and right off the National Mall -- I was not there at this hour.
*******
Returning to the original entry ... 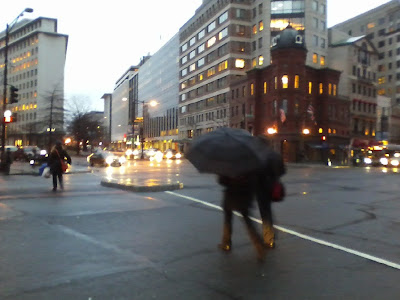 The snow that fell in the wee hours of the morning was long gone in downtown and midtown Washington. I post this image first because this is the reality D.C. proper experienced during the day.
******* 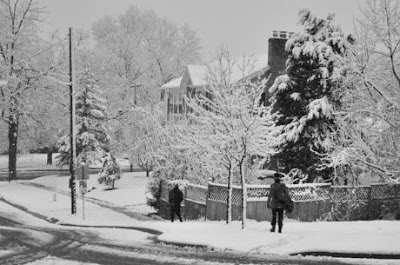 This is what it apparently looked like in Wheaton, Md., just north of the District this morning. This image appeared on the Capital Weather Gang in this entry.
*******


So there was actually accumulating snow in the D.C. area on Monday, although it was hardly a blockbuster, and by the end of the day, downtown / "midtown" Washington featured just the usual wet streets that have been so common this season in would-be snow events. Having said that, though, it was actually "snowy" when I woke up pre-dawn around 5AM and looked outside with moderate snow falling and covering the cars and grass and even beginning to accumulate on the roadways. I did not get a picture of that. 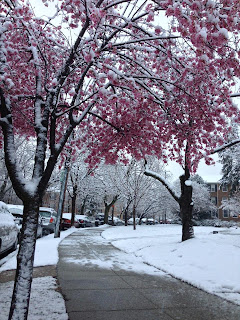 Here is a picture that Capital Weather Gang-ster Ian Livingston took this morning in upper NW D.C. (not sure of the exact street) that was in the same CWG entry.

Snow totals in the Baltimore / Washington area ranged from a slushy trace to about 5 inches in parts of Baltimore, Carroll, and Howard Counties in Maryland. Farther west toward the Allegheny Front, in the Shenandoah around Front Royal, and into the Potomac Highlands totals were 6 to 8 inch range with 9" in Frostburg, Md., and spots in Grant and Mineral Counties, W.Va. The highest total I saw was 10" in Cherry Grove (Pendleton County), W.Va. 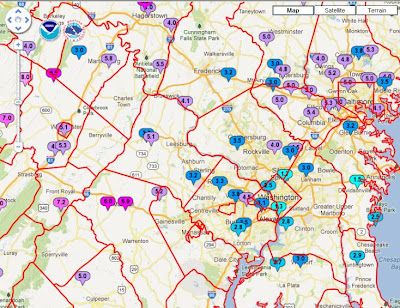 Baltimore / Washington area-wide and more extended regional snowfall totals as shown in this Sterling LWX CWA map (although I cropped the image somewhat). Click on image for larger version.
*******


Officially at the three airport climate station totals and the year-to-date and overall seasonal totals, departures, and current 30-year (1981 - 2010) average normals are as follows: 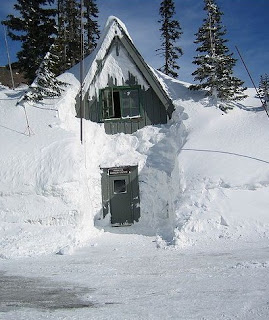 
Overall precip totals are a bit below normal at KDCA and KBWI but a bit above normal at KIAD. I'll try to post the monthly totals at the end of March. This was the most snow so late in the year since 1990 at both KIAD and KDCA. In that year, KIAD actually had another 2.7" on April 6, 1990 (not to be confused with the April 6, 1982 snowstorm that hit New Jersey and New York -- which I remember as I was living in New Jersey then -- but not the D.C. area).
As it is, this is probably the last of the snow chances this year and the pattern will slowly begin to warm up. 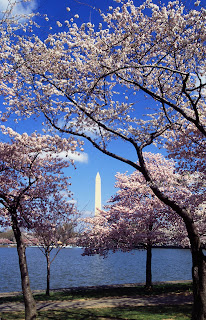 Last year by this point, it had been ridiculously warm not just in the D.C. area but nationwide. The cherry blossoms in D.C. had already come and gone.

Not so this year. As a result, the signature tree in D.C. -- the Yoshino cherry trees -- have yet to blossom.

Nevertheless, even with the cold / wet weather, the tourists are beginning to descend en masse on D.C., clogging up the Metro and failing to stand to the right on the (functioning) escalators, and just all around being annoying. Of course, I don't mind giving directions to those that ask.


I went to the gym tonight after work (and a decently productive day), and I had a very good work out including 45+5 minutes on the treadmill, nearly an hour weight-lifting (on the machines), and a half hour in the swimming pool (and this was in large part actual lap swimming). I went to the gym four days in a row, and now I'm taking off Tuesday and Wednesday. 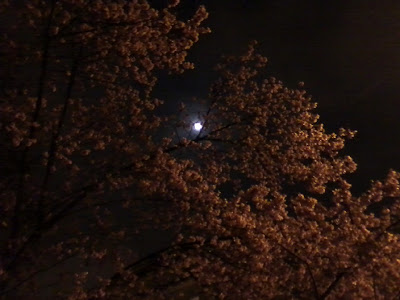 The nearly Full Moon (waxing gibbous) seen through the thinning clouds and the floral boughs of the blossoming cherry tree that grows at the corner of 16th and S Streets NW (right next to the Masonic temple). This is the tree featured as the lead image in my previous entry, and I'm still not sure what kind it is, though I am assuming it is a flowering cherry of some sort.
*******


I was miffed, though, that my weight had jumped up 2.5 pounds to 160.5 pounds from my "global" low last week of 158 pounds and 1.5 pounds from Saturday. Yes, I realize that is probably just in the variance noise,  but it came after 4 days in a row of going and three with good cardio.
I am also well aware that in a world where an estimated 1 billion people people live on $2 a day or less and many lack access to adequate food, clean water, sanitation, and health care, this is such a First World American "middle class" bourgeois type of problem (all the more so given the typical Americans' weight as they break wind in front of the TV while the watching Fox News Channel).
As it is, I don't think I'm going to lose too much more weight. I may have bottomed out. I just can't lose the remaining 10 to 15 pounds of mid section flab (even though it is no longer visible when I'm dressed, except maybe just in a t-shirt).
*******


OK, that's all for now. I'm not planning on taking the computer home Tuesday or Wednesday nights, so my next update will not be until Thursday. 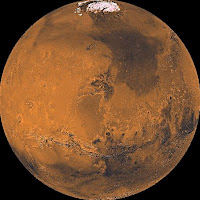 Gary and I are taking him to dinner at Pines of Florence. As for his age, he's JUST ABOUT 24-1/2 Martian years old.


On Wednesday after work, DD and I may go to Old Ebbitt Grill to the Old Bar and have a drink and discuss the book idea.
As for this coming weekend, I am going to try to post my two New Jersey entries, and barring something major, I will just focus on them. I don't need to post another frickin' political commentary on this or that.
--Regulus
Posted by Regulus at 1:43 AM