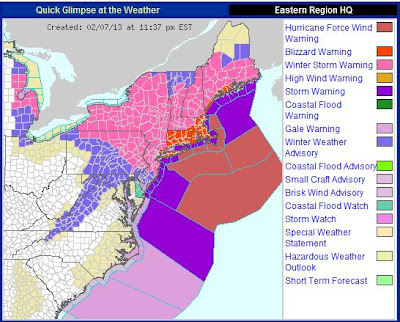 The weather advisories map in place as of 11:37PM EST February 7, 2013 for the NWS Eastern Region.
Note 1: This comes from the webpage linked here and you may scroll over the map and click on the regional offices' maps. It is much better than the corresponding regional office ones available from the Weather.gov site, again by scrolling over. Those versions of the regional office sites are crappy.
Note 2: Among the warnings (see legend at right) are the "hurricane force wind warnings" that the NWS regional offices were forced to use during Superstorm / Hurricane Sandy because the idiots at the National Hurricane Center decided to be super-legalistic and confuse the issue.
******* 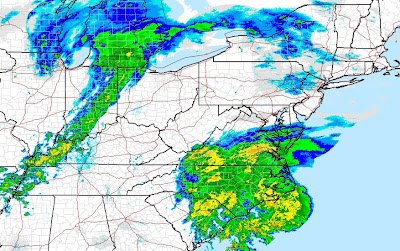 A portion of the U.S. radar mosaic (composite mode) showing the current southern stream storm / coastal storm and the northern stream system back over the upper Midwest valid at 0408UTC 08 February 2013 (11:08PM EST Feb. 7, 2013). The coastal low (which will redevelop / intensify) is presently located near Savannah, Ga.
******* 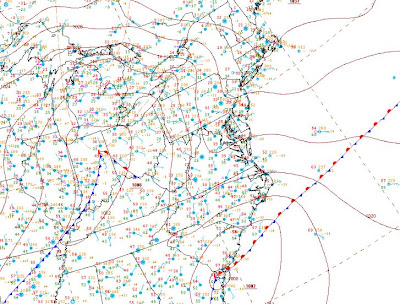 
Here is the weather forecast for Friday evening at 7PM EST February 8, 2013 (click on map for larger version):

NWS/NCEP/HPC surface map forecast issued at 0430 UTC 08 February 2013 (1130PM EST Feb. 7, 2013) valid at 00UTC 09 February 2013 (7PM EST Feb. 8, 2013).
There is a BIG coastal storm / nor'easter -- "Nemo" in the GOP Weather Channel's** weird naming convention for "winter" storms -- that is about to bring a blizzard from the New York City area and parts of Long Island northeastward across southern New England to the Boston area with 1 to 2+ feet of snow in places. Winter storm warnings and full-fledge blizzard warnings are in effect across New Jersey into New York City (full fledge blizzard warning) and up into New England.
**The Weather Channel is utterly unwatchable, but that's been true for a long time now. It's the usual corporate ass-kissing and the same stable of on-air talent from the useless Al Roker to Jim Cantore, the John Holmes of the Weather Channel. 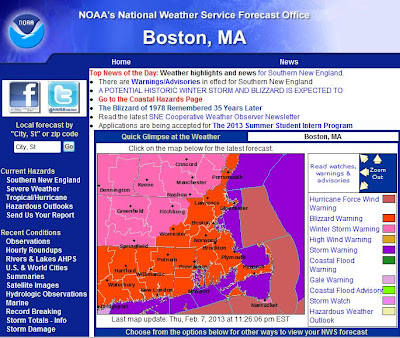 
The storm is occurring almost exactly 35 years to the day of the Northeastern United States Blizzard of 1978 that buried parts of Rhode Island in excess of 30 inches of snow. Well do I remember that storm in Long Branch, N.J., where we had about 18 inches and drifts to 4 feet, and about three weeks after a 12" snowstorm in January 1978. I was 8 years old and living with my grandparents and dad on Kirby Avenue in Long Branch. 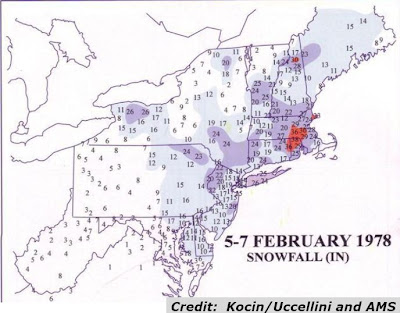 Here is the map of snowfall totals in that blizzard. It comes from the link directly above on the BOX page.
*******

I recall that storm starting on Sunday night (shortly after my dad drove me from my maternal grandma's house on Henry Street in South Amboy at the end of one of my weekend visits back to Long Branch).
The 1978 storm basically missed D.C. proper (I think KDCA had about 2" and KIAD probably about 1") but Baltimore (KBWI) had about 6" and just east of the Bay Bridge was about 12 inches. (Of note, it was the President's Day Storm in February 1979 that clocked D.C., although New Jersey and New York City also got that one.) 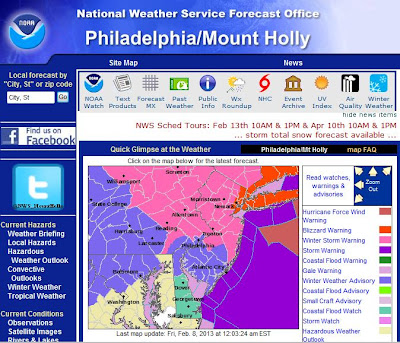 
And much like that long ago storm from another era, this one is going to totally miss D.C. -- actually, the whole Baltimore/Washington area -- although there is a winter weather advisory now in effect for the northern and western suburbs of D.C. and into Baltimore City proper. 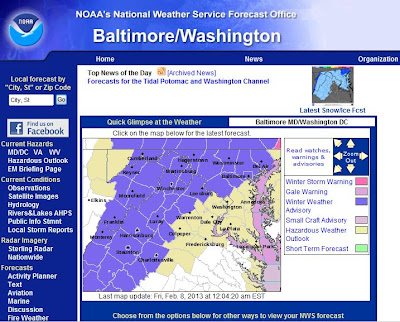 The Sterling (LWX) / Baltimore / Washington area NWS regional office's webpage CWA map of advisories in place as of 12:04AM EST February 8, 2013. Source here.
Gary said we'll have a bit of snow and sleet followed by rain -- maybe 1/4" -- and then maaaaybe some "wraparound snow" from the coastal storm of the sort we rarely get at this latitude and longitude.
******* 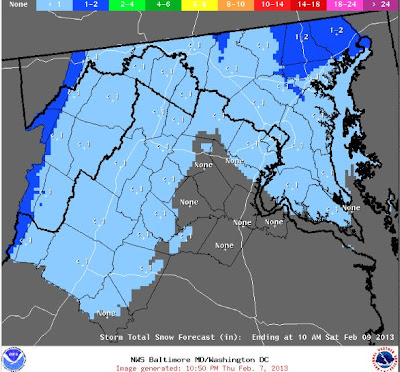 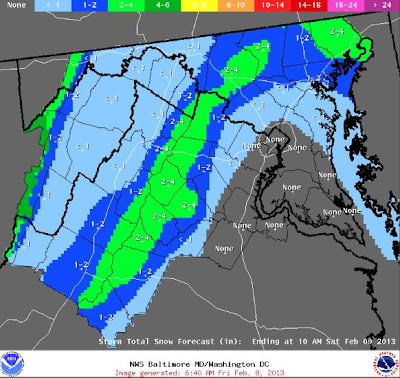 Here is the same snow map but updated at 650AM February 8, 2013. Note the intentional God-Demiurge-spewed viciousness that has to underlie such an outcome. Of note, there has been 0.18" of rainfall so far -- yes, all rain -- at KDCA through 8AM and the radar (at this point) looks like the whole thing is basically over. (I think that's just wraparound snowfall.)
*******


Politically, here in D.C., t's the usual neocon warmongering, "cut entitlements" to reduce the currently phony deficit problem (read: "privatize" Social Security for the Wall Street crooks and criminals and balance the budget on the backs of the poor while giving another trillion in tax giveaways to multi-millionaires, billionaires, and offshoring corporate oligarchs), and  fixation on "process" and "bipartisan" (read: hardright Republican) outcomes from The Washington Consensus / WaHoPo editorial and op-ed whorehouse "stable."
*******

Speaking of politics, here are a couple other items ... 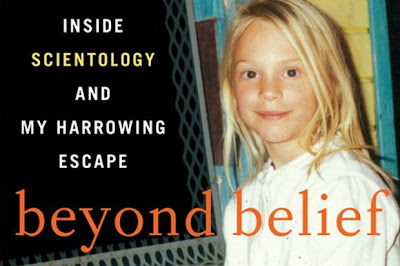 A Salon article "How Scientology ensnares celebrities" features excerpts of the new book by Beyond Belief: My Secret Life Inside Scientology and My Harrowing Escape by Jenna Miscavige Hill, the niece of Church of Scientology leader David Miscavige. Fascinating stuff. 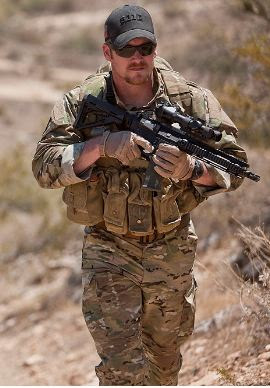 Another Salon article on the life and death of Chris Kyle, the former Navy SEAL sniper who was shot and killed with a friend at a Texas firing range on Saturday by Eddie Routh, an Iraq War veteran with psychiatric problems who shot and killed him and his friend Chad Littlefield. Kyle had taken Routh to the Rough Creek Lodge's shooting range in Erath County.


The piece raises an excellent point: Kyle's cartoon-like view of the world -- as expressed in his book American Sniper: The Autobiography of the Most Lethal Sniper in U.S. Military History with its endless glee at killing (approx. 250 he claimed) those in Iraq who were always and by definition "bad guys" (with no subsequent reflection whatsoever 'cuz that was for wussies, fags, and Democrats) directly contributed to a situation in which he took a mentally disturbed former Marine to a shooting range, and thus his own death by the firearms with which he was so obsessed. 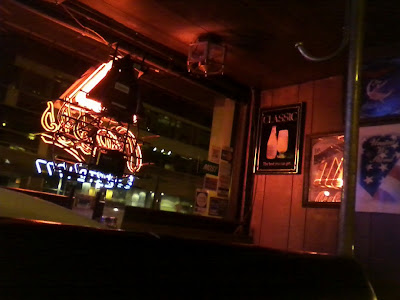 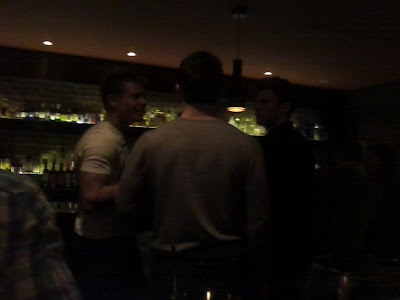 Some sorority girls buff hot guys at No. 9, Washington, D.C., 9:12PM February 6, 2013.
Two points: (1) Yes, it's a dim picture with my crummy cellphone camera; (2) Personalities here tend to be inversely related to the cube of the physique. Oh, and a third point, on Wednesdays, my two favorite bartenders work side by side there (one of whom is now in Argentina on a four day trip -- he is the one that travels all over the world).
*******


On a personal note, I had a good gym workout tonight -- 3rd one this week -- and I also got dinner at Bua afterwards and brought it home. I had a Singha beer while there. I love that beer.
OK, that's all for now. I intend to have a Friday Night musical interlude entry and then post my at least one of the New Jersey trip-themed entries over the weekend.
--Regulus
Posted by Regulus at 1:50 AM