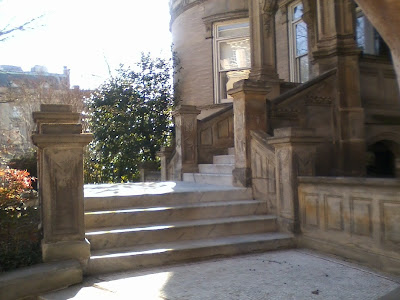 The outdoor steps of the Argyle House at 2201 Massachusetts Avenue NW, Washington, D.C., 2:52PM February 18, 2013.
This place is also called the Miller House and has a Wikipedia page of its own, or at least an image page. That page states it is was designed by Paul J. Pelz in 1900 in the style of a Châteauesque mansion and today is a condominium. It also states it is "a contributing property to the Massachusetts Avenue Historic District and the Sheridan-Kalorama Historic District."
I was sort of wandering around alone this afternoon.
*******


My holiday-extended weekend* really was nothing of note -- and the pictures I'm posting tell that non-story. The pictures are frequently low-quality as they were taken by my crummy cellphone camera -- and a number of them are in dark restaurants / bars, where I seem to spend a large amount of time.
*Today (Monday) is the Federal holiday of Washington's Birthday (previously called Presidents' Day). As an aside, this Federal holiday is the last one until Memorial Day and (in a manner of speaking) marks the end of the "holiday season," so to speak, that begins with Veterans Day with a least half a dozen Federal holidays in a roughly 3 month period (I say "at least" because we were given the day after Thanksgiving off as well as an impromptu Federal holiday). There are now only 4 Federal holidays for the next 10 month period until Veterans Day (Memorial Day, Independence Day, Labor Day, and Columbus Day). 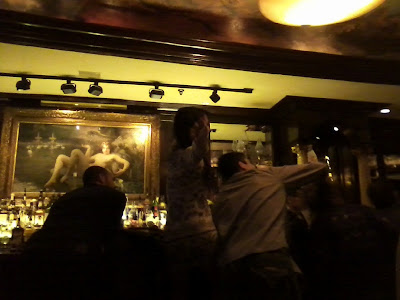 A group photo in progress at in back bar of the Old Ebbitt Grill, Washington, D.C., 10:57PM February 16, 2013.
I'm unsure which of the four bars this is in the place. I'm pretty sure it's not the Old Bar or Oyster Bar which leaves only Grant's Bar and the Corner Bar. That painting of the reclining naked lady was kind of jarring. Her legs are huge.
I went to Old Ebbitt Grill with Andrea and Nick on Friday night.
******* 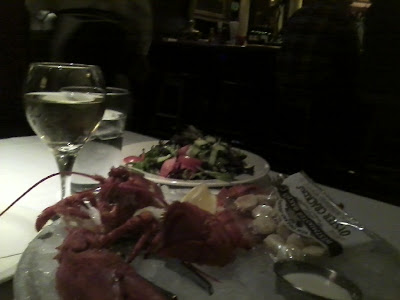 My lobster dinner with salad and Sauvignon Blanc glass of wine at Old Ebbitt Grill, Washington, D.C., 11:14PM February 16, 2013.
Yes, I got a lobster dinner. The lobster sure looks like a giant vermilion-hued insect.
******* 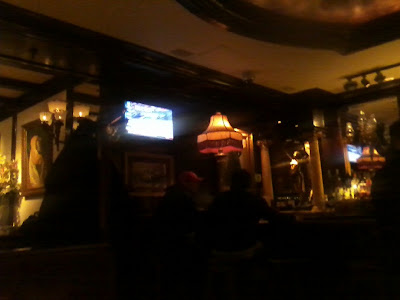 Another view of the back bar (Grant's or Corner Bar?) at the Old Ebbitt Grill with an ornate lamp below one of the ubiquitous flat screen TVs that define commercial restaurant existence today; Washington, D.C., 12:01AM February 17, 2013.
******* 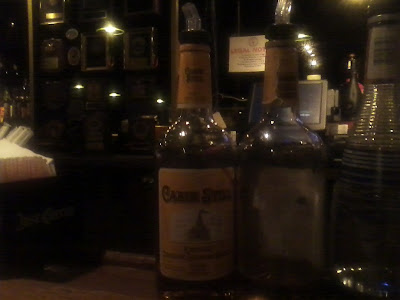 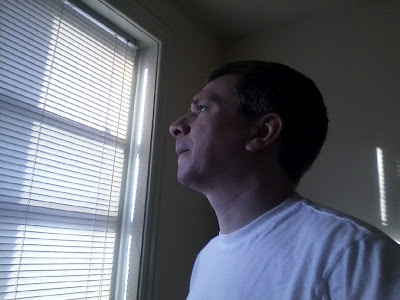 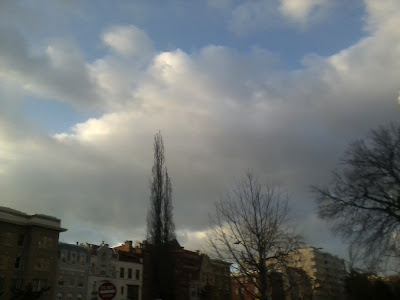 Picturesque evening stratocumulus clouds in a chilly sky over Washington, D.C., as seen from New Hampshire Avenue at 16th Street NW outside my apartment building, 5:05PM February 17, 2013.
There were snow squalls in the area yesterday but they stayed over central and northern Maryland never made it to the immediate D.C. area. Now there's a shock. Not.
******* 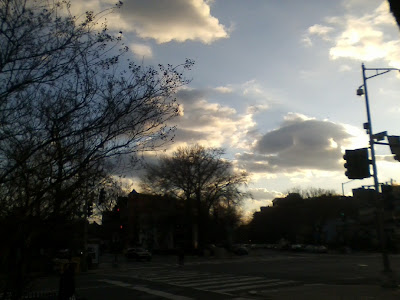 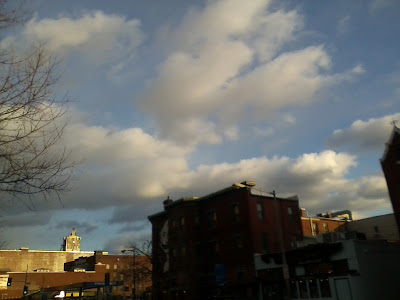 
I met Gary at Nellie's and we were talking to Brett, who is now a manager there.
**Updated 12:12AM 6/18/2014: Content removed and edited.**
Brett told us about this place at 1905 9th Street called, yes, 1905. It is an upstairs restaurant / bar with a British pub theme and I immediately loved it. Alas, the pictures did not come out so great since it was so dark.
As for Brett, she's such a good person (and to that end, she never judged or condemned me through all that happened with the 17th Street crowd). She is justifiably widely liked in the D.C. gay community. And I really like her. 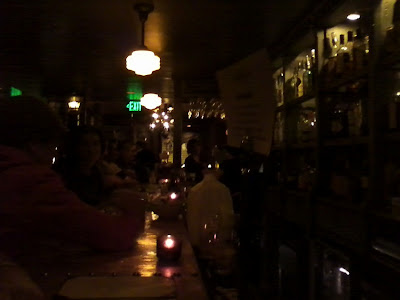 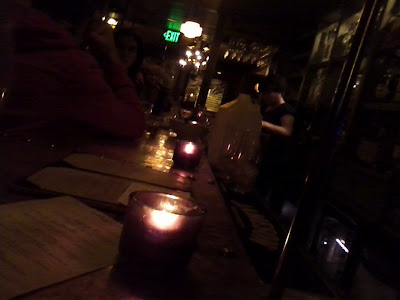 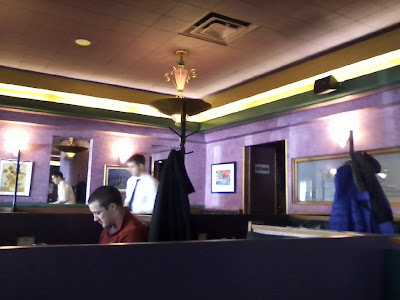 Trio restaurant, Washington, D.C., 2:22PM February 18, 2013.
I joined Gloria and Kristof there at the tail end of their regular Sunday brunch, which today was on Monday. They both had to leave -- Gloria for a doctor's appointment and Kristof because he had already had 5 Bloody Mary drinks and needed to take a nap. I stayed and had my own brunch.
******* 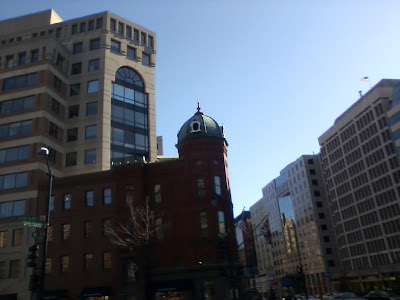 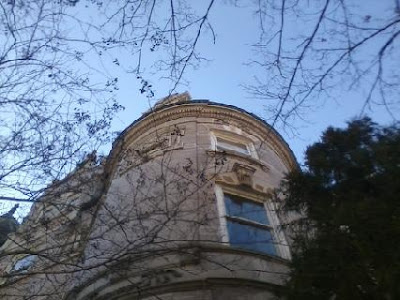 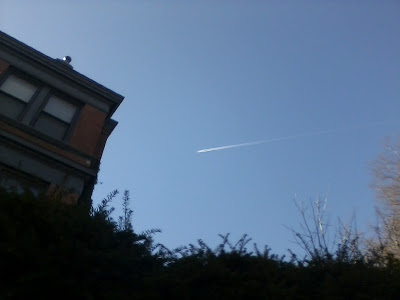 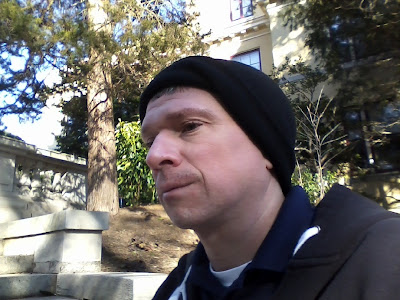 Yours truly at the "Spanish Steps" of Washington, D.C., 3:00PM February 18, 2013.
D.C.'s Spanish Steps -- not to be confused with the real ones in Rome -- are formed where 22nd Street dead ends and the land rises up to S Street above. There is a fountain here but it was not turned on and instead there was just some half-frozen water in the bottom along with a bright green shirt someone had discarded.
I used to go there with Chris T. sometimes but he left D.C. over 2 years ago now.
******* 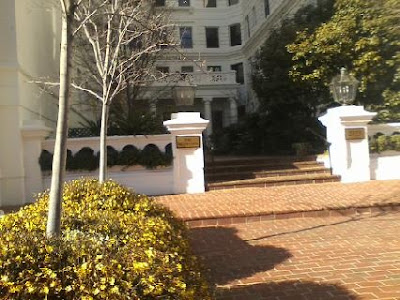 The Brighton at 2123 California Street NW, Washington, D.C., 3:10PM February 18, 2013.
I've mentioned this before in an entry last February after a similar walk but will do so again: "California" is one of two state-named thoroughfares in the District of Columbia that is not "avenue." The other is Ohio Drive (which loops around East Potomac Park). While Ohio Drive is a "replacement" for the Ohio Avenue that disappeared when the Federal Triangle complex was put in decades ago, California Street is more confusing since I've seen old maps where what appears to me to be the same street was "California Avenue."
******* 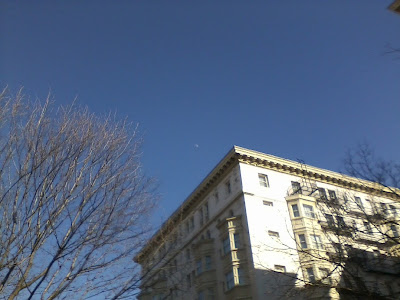 
OK, that's about all for now. I need to get back into my regular work week routine -- including going to the gym -- starting tomorrow. My next update will be a few days. Yeah, yeah, I know -- the New Jersey trip-themed entry. It's still in draft form.
-Regulus
Posted by Regulus at 7:36 PM