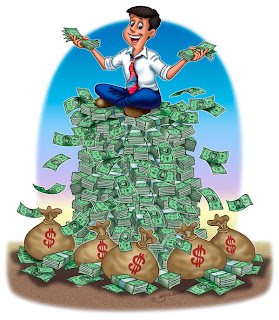 I did not expect that (especially with the delay in the former that I thought was occurring). I'm rich. Well, sort of. I can at least get a decent dinner tonight if I want to do so.*

I'm also getting my next paycheck on Monday (though in these cases it often arrives two days "early" on Saturday because of how the funds are submitted and my bank has Saturday hours).


In short, I will be temporarily be a wealthy man (at least by my standards). We're talking around $3,000. Of course, that will vanish quickly with rent and bills and groceries. In addition, I REALLY need to buy about $500 (maybe $600) worth of new clothing and $200 worth of new bedding (quilts) and maybe a new pot, pan, fork, dish, knife, and spoon for my little kitchen.
And then next month in March are the next two wholly contrived crises -- the sequester (I think I should be OK) and a possible Federal Government shut down (which could very much affect me). As such, this temporary "stimulus" to my bank account may not last long. Plus there is a great deal of impending uncertainty.
*I went to the gym Tuesday and Wednesday nights and I'm skipping tonight. Both nights were fairly strenuous workouts and I also made it into the swimming pool last night.
OK, that's all for now. This is an early update since I am not taking the computer home tonight.


It is a gusty, blustery cold night again (it's been surprisingly cold and breezy the past few days). The next precip. event looks to be a mix turning to rain (typical for here).  As it is, we are just about out of time "climatologically" for measurable snowfall in Washington -- and the year ends way below "normal." Again. 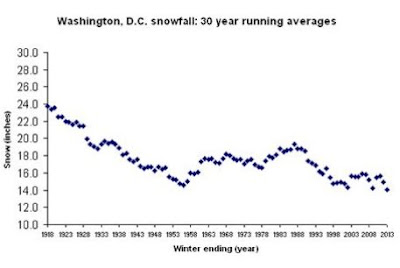 The Capital Weather Gang has had a series of intricate and detailed entries on D.C. snow trends during the past century and in the context of climate change. Above is the 30-year average back to 1918. 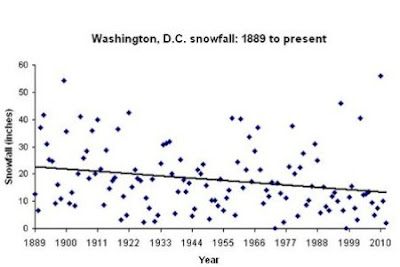 The two images including the one directly above of D.C. seasonal snowfall and a trend line were from an entry yesterday concerning less average snowfall yet larger extreme events in D.C., which is what we expect in a warming world. (That outlier in winter 2009/2010 should have been much higher considering what KBWI and KIAD received, but KDCA really sucks as as climate station spot to measure snowfall. Also, the switch to KDCA as climate station for D.C. apparently occurred in 1946.) But I'll save this for another time.
My next planned entry will be tomorrow night (FNMI).
--Regulus