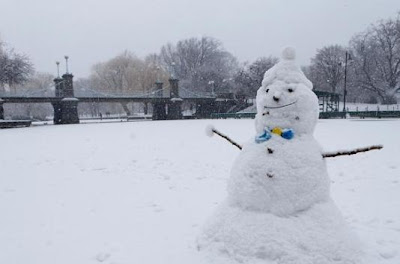 
Here is a brief weather update on the Blizzard of '13 or "Nemo" as the GOP and American Bourgeoisie Weather Channel is calling it as part of its (unofficial) list of winterstorm names (a problematic concept to me but never mind that right now). 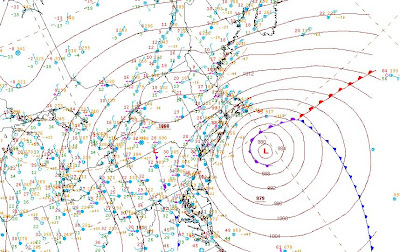 Above is portion of the high-resolution NWS surface analysis for the U.S. and adjacent regions as of 00UTC 09 February 2013 (7PM EST Feb. 8, 2013). The main coastal low is bombing out (central pressure 979 mb) about 200 miles SE of Montauk Point, Long Island with an occulusion process underway. Click on image for larger version.
*******


I shall refrain from any extensive discussion of the weather except to note the following: There is a raging blizzard across southern and central New England tonight including the Boston area, as well as parts of eastern and central Long Island. I'm unsure if Boston will surpass it's 1978 total (27.1" officially at Logan Airport, then a new record). It's all-time record is 27.5" in the Feb. 2003 storm but the '78 storm was more massive and windy. 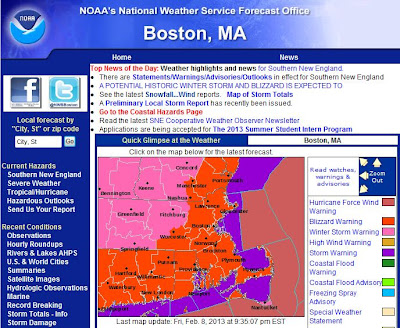 The Taunton (BOX) / Boston area NWS regional office's webpage county warning area (CWA) map of advisories in place as of 9:35PM EST February 8, 2013. The bright orange/vermilion are blizzard warnings (see legend at right). Source here.
I love how the Southwich Jog ("notch") of Connecticut is in a blizzard warning but the adjacent parts of Massachusetts are in a winter storm warning.
*******


The NYC area is getting bursts of accumulating snowfall but the city itself has not so far been hit with the advertised full-fledged blizzard (at least in terms of tremendous snow amounts). Nevertheless, the OKX NWS weather office is insistent on keeping the blizzard warning in place -- and the dicussions remained snow-pocalyptic all day. 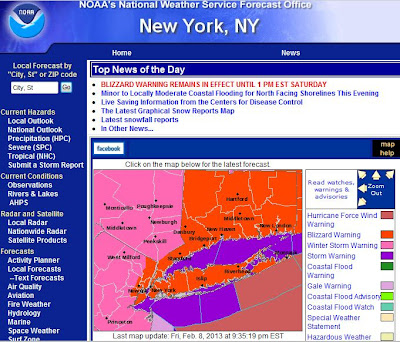 
Other parts of New Jersey seemed to have the precip cut off early but now there is extensive wrap around snowfall. Central Park had 2.5" through 7PM though Wayne in Passaic County, N.J., was up to 7" as of 410PM (the latter is a spotter report).
*******


Here are some recent NWS radar images all in enhanced base mode reflectivity: 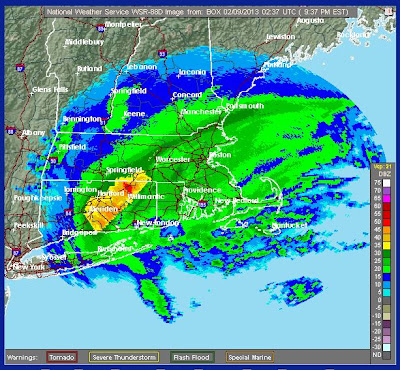 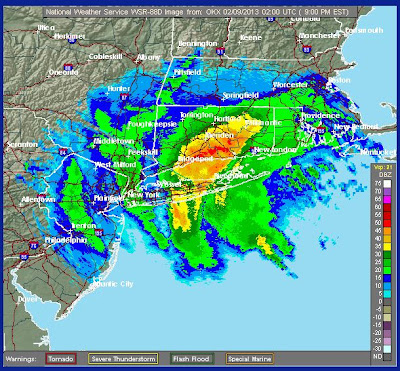 Upton (OKX) NWS radar at 9:00PM EST February 8, 2013.
Ditto on the observation about the bright colors over Connecticut and Long Island Sound.
******* 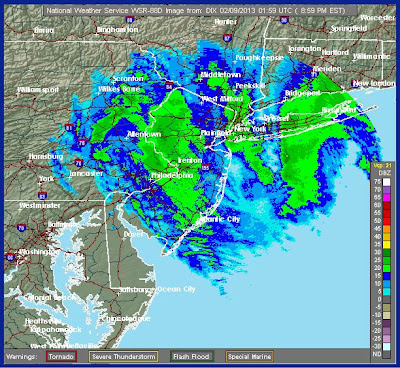 Fort Dix (DIX) NWS radar at 8:59PM EST February 8, 2013.
Interestingly, all that activity over New Jersey filled in over the past 5 hours as the northern stream energy caught up to and was captured by the coastal low. It was actually precip-free over most of New Jersey around 4PM.
******* 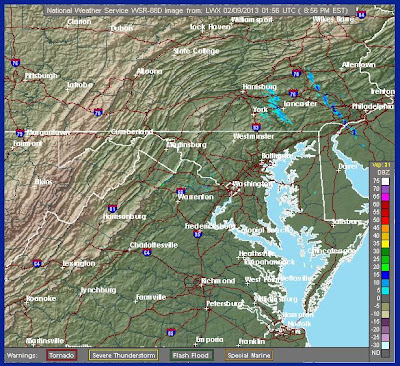 The Sterling (LWX) NWS radar at 8:56PM EST February 8, 2013.
This shows what the Baltimore / Washington area is getting: Jack-horse-sh!t
Specifically tonight here in D.C., there is nothing but some clouds and gusty /blustery  northwesterly winds as the low bombs out well offshore. 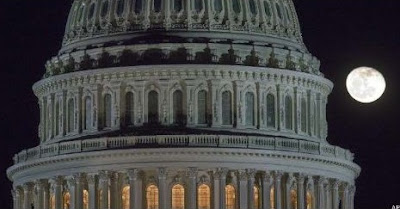 In short, it's just the usual D.C. nothing -- garbage -- winter even as the city remains the hateful, mind-numbing, and worthless place that it is. F/ck you, D.C. I guess you're just happy being that fetid summertime stank-ass swamp that you are with a bunch of self-important, soulless, corporate gigolos rushing about here and there dodging the homelessly insane and those from the ever-smaller boom-boxed ghetto sections of the city.
*******


OK, I guess my laundry is done about now, unless it didn't dry properly. Tonight I'll go to No. 9 and/or Nellie's. I also need to post my Friday night musical interlude.
--Regulus
Posted by Regulus at 10:17 PM