Here is my Friday night musical interlude after a gap last week owing to my impending trip to New Jersey -- about which I intend to write this week in at least two and eventually three entries.
Paul Hardcastle - "Time to Reflect" from his Hardcastle 4 release (2005)
*******


Brief Weather Interlude: A Cold February Night, Numerous Chances of Light Snow
It is a very cold and blustery night with the temp. in D.C. itself (or rather, at KDCA) at the 10PM hour already down to 23F, the dew point at 1F, and the wind chill with a gusty westerly breeze between 10F and 15F. KBWI is at 21F and KIAD is 19F. A clipper system is forecasted to bring about an inch of snow tomorrow night into Sunday morning.

Above is the NWS grid forecast for Washington, D.C., proper valid from tonight through Tuesday (Feb. 5th) taken from the Sterling LWX website .

That's quite a snowy stretch for our area -- although it is now expected all of that will be very light with minimal accumulations. 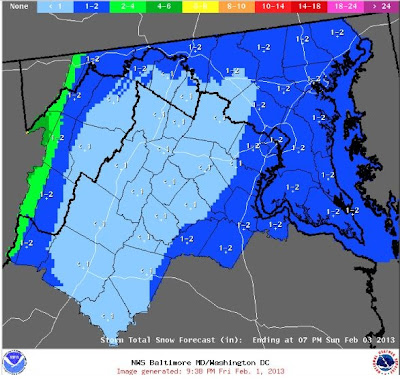 And above is that "experimental" snow forecast map updated at 9:38PM EST tonight through 7PM Feb. 3, 2013. I've discussed in a blog entry last month how this map is the kiss of death for any chance of snowfall.
Updated 1051AM EST 2/2/2013: The updated version of this black magical forecast map is already whittling away the amount. I'm shocked. 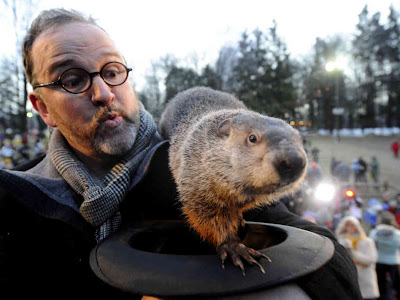 Oh, yes, this tubby little rodent, Punxsutawney Phil, is likely to see his shadow tomorrow, but then again he usually does -- and, it goes without saying, this is a wholly fictitious event with zero weather predictive value. He is pictured above on Groundhog Day 2011 with one of his handlers.
UPDATED 1051AM EST 2/2/2013: I stand corrected. The creature -- or rather, his human handlers who decide this foolish thing in advance but the "outcome" of which large numbers of Americans actually believe is predictively accurate, decided that "Phil" -- did not see its shadow and "therefore" spring will come early.
*******


OK, that's all for now. Tonight I intend to go to No. 9, although I need to eat dinner first and don't know if I should go to Old Ebbitt Grill (where I've not gone in over 2 months). Whatever I do, tonight is a solo night for me spent in the crowd. (This assumes No. 9 is crowded; if it is totally empty, I'll go to Nellie's.)
--Regulus
Posted by Regulus at 10:40 PM