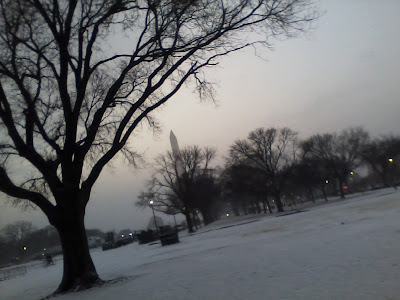 The Washington Monument from behind some trees along the north side of the National Mall as seen on a briefly snowy evening as DD and I walked across the Mall after work from L'Enfant Plaza to downtown D.C., 5:30PM, January 25, 2013.
DD went to Metro Center station (he lives in  Rockville) while I walked about two-thirds of the way home until I caught a fortuitously timed S9 (yes, S9) bus at M and 16th Street and took it the rest of the way to the U Street stop.
*******


This was going to be my Friday night music interlude, except (1) there hasn't been anything specific that I've wanted to post, and (2) I am distracted by my impending trip to New Jersey tomorrow for my great aunt's 100th birthday party (Aunt Babe). I am heading up there tomorrow with my mom (and Ray coming along). My dad is also coming up from Florida (see interesting story below). 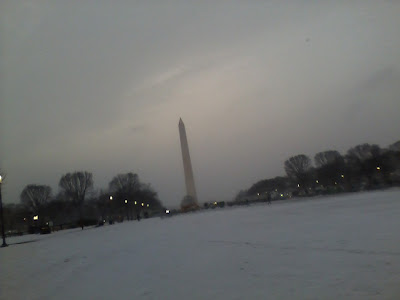 Walking across the National Mall looking at the Washington Monument in what was felt like (owing to the approaching clearing) the wintertime snow equivalent of a summer downpour, 5:28PM, January 25, 2013.
*******


We had a negligible amount of snow late this afternoon into the early evening. Well, OK, maybe I should say we had a dusting to at most 1/2" in the suburbs with closer to the former in the District proper. And I shouldn't say "negligible" because any snowfall in D.C. is hard to get these days. (I don't have the amounts for this event.) 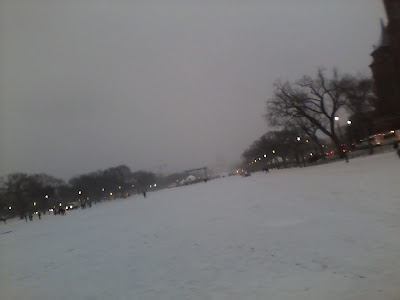 
And, of course, in downtown D.C., unless it is a bona fide major snow event (I estimate 6+ inches), everything turns almost immediately to a slushy mess. Then there is all that toxic rock salt and florid green chemical garbage that is thrown down everywhere in order to make the world lawsuit proof for lawyers and corporate oligarchy. 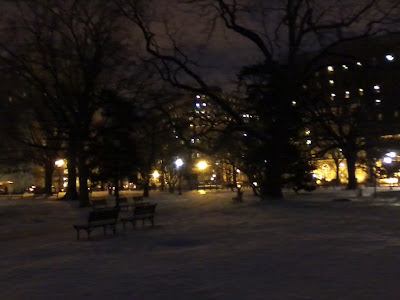 Snowy evening scene in Lafayette Park, Washington, D.C., 5:56PM, January 25, 2013.
I would have taken a pic of the White House but the Inaugural Parade reviewing stand monstrosity is still up as are all these fences and barriers.
*******


Tonight is a cold and cloudy night but with a sort of "soft city" winter time feel. 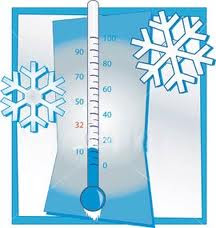 Temperature-wise, it has not yet gotten above 25F at National Airport today, so assuming it does not reach 30F, it will be the fourth such day in a row -- the longest stretch since Feb. 5 - 8, 2007.

It is forecasted to start warming up tomorrow reaching at least 32F at KDCA (if it does not, then it would be the longest such stretch of under 32F for highs since Jan 23-28, 2004).


Let me say, though, that I'm glad this wasn't a major snowstorm because my dad is presently driving up from Florida to New Jersey. 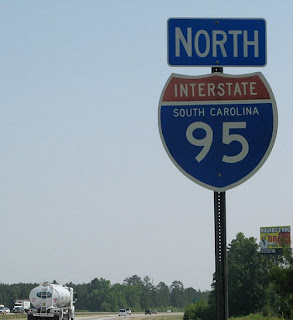 He actually made it from his starting point in Flagler Beach, Fla., (around 620AM this morning) through Georgia, South Carolina, and North Carolina to about 10 miles inside Virginia a bit south of Emporia tonight. Thus, he drove about 600 miles.

This included driving into today's weather system as it transitioned from rain to sleet to snow and ice to just heavy snow by the time he was in southern Virginia. He is safe in a cheap motel somewhere along I-95 tonight near Emporia. 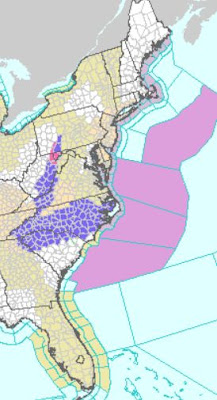 He said driving was very treacherous and he said he saw literally dozens of accidents / vehicles having skidded off the interstate.

It must have turned to all snow near the Virginia - North Caroline line and he said there is about 5" at whatever cheap motel he is staying off I-95. (That being the case, there should have been a winter storm warning in effect in that area, not a winter weather advisory.)


The worst part of the sleet and ice was near Rocky Mount, N.C., a fact that represents an incredible irony in his life for something that happened there with my mom in another ice storm back in 1970 during their brief marriage.
They were flying in his little Cessna airplane down to Florida in the winter and were caught in an ice storm and grounded in Rocky Mount for days. It was a very bad situation and my mother still remembers it vividly, esp. when he decided to take off anyway and had to stick his head out and open airplane window because the main windshield was iced up.
The irony was not lost on either my parent today (I was emailing my mom about his travels even as I spoke to him on the phone a couple times).
I was but 1 year old at the time and in New Jersey with my late paternal grandmother (Aunt Babe's older sister) and grandfather.
Oh, the irony. Indeed, I had a terrible dread that something might happen to him there but that did not happen, thank God Who/Whatever.
As it is, today's winter storm was his first experience with a significant snowstorm in probably 21 years (having left New Jersey in 1992).
I spoke to him a short while ago and he said, "I was panicking, I couldn't find my key. The staff - they're all black here - the lady was helpful. She had the room nice and warm." I didn't quite follow the story.
******* 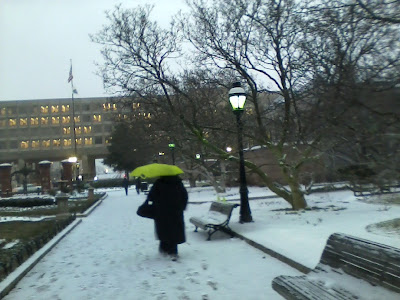 Lady with umbrella walking through the Enid Haupt Garden of the Smithsonian on a snowy evening, Washington, D.C., 5:26PM, January 25, 2013. (This is actually the first picture I took on the walk home.)
*******


OK, that's all for now. I'm going to No. 9 tonight -- meeting Kristof and hopefully with no M. Wade Tipamillyun sightings, although I sort of doubt it. He's not going to give up $600 in tip money to NOT work on two weekend nights. 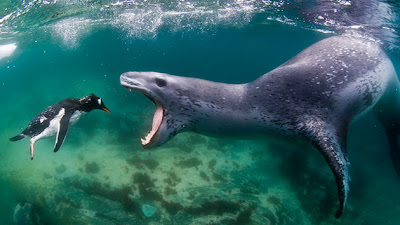 Here he is collecting a tip. Actually, the explanation behind this amazing predator-captures-unsuspecting prey photo taken in the waters off Port Lockroy on the Antarctic Peninsula in 2009 is found at this link.
*******


I have to be at Union Station by 1015AM tomorrow. I will try to post a very quick morning update but if not, this shall be my last entry until Monday.
OK, that's all for now.