Too Late at the 1AM Hour for a Proper Blog Entry 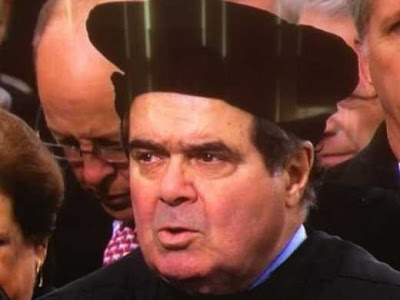 Supreme Court Justice Antonin Scalia, who "dabbles" in law in such a way as to make sure that the forces of corporate fascism and oligarchical plutocracy always have the "correct" Constitutional argument, wears a weird head dress that suggests Mickey Mouse ears at President Barack Obama's Second Inauguration, January 21, 2013.
Tony "Three Fingers" Scalia gave us the Bush v. Gore Supreme Court Coup "decision" in 2000 (Ben Wittes still keeps a copy of it on his WaHoPo "centrist" nightstand) and all the agonies that ensued. In this way, this fat little man has caused incalculable suffering with wasted lives and fortunes in our world in the past 13 years.
Oh, Wall-P, tell us how your circuits get all titillated when you hear Scalia go on and on about "strict constructionism."
*******


I started an entry to discuss President Obama's second inauguration and The Speech he made that has folks abuzz -- progressives very pleased and the rightwing political / media / entertainment complex in fits of incoherent rage --  and the Arctic outbreak over the Eastern U.S. including here in D.C., where there is a chance of snow tomorrow night and again Friday. 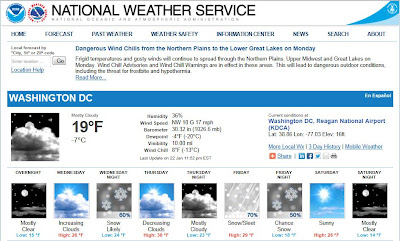 NWS forecast for Washington, D.C., valid January 23 - 26, 2013. Note the highs are all sub-freezing. This has not happened in quite some time. Also note the snow possibilities this week.
*******


However, it is already nearly 1AM and I have to go to bed. My work day was OK and I had a good gym workout tonight.
I may not take the computer home tomorrow so any full entry on the planned topics may have to wait until Thursday night.
--Regulus
Posted by Regulus at 1:14 AM