This is my delayed Friday night musical interlude that I am posting on Saturday night.
Shakatak - "Footprints in the Sand" (2009)
It's a nice and smooth upbeat ballad.


And for something a little weekend going out dance club (as was more common back in the 1990s and early 2000s):
Eric Prydz - "Call on Me" (2004)
This is a remake of Steve Winwood's 1982 hit song Valerie set to a rapid dance club beat. The video itself is basically a straight soft core movie short set in an aerobics class dance studio, but that's what we have for it.
Apparently, Winwood loved this remake and even helped out in it. It's nice to hear something like that instead of the usual "the parties eventually settled out of court for an undisclosed amount."
*******


*1961 was the Japanese original release while 1963 was the year of the US/UK release year with the title Sukiyaki. Of note, the video itself is from a Japanese TV show in 1963.
Yes, I've posted this video before in my June 12, 2012 entry and earlier January 9, 2011 entry (although I updated the earlier one a short while ago since the previous YouTube link had OF COURSE disappeared for the usual bullsh!t reason involving internet copyright claims). You can read in those two places the backstory to Sukiyaki and the unlikely and tragic death of Sakamoto in 1985.
******* 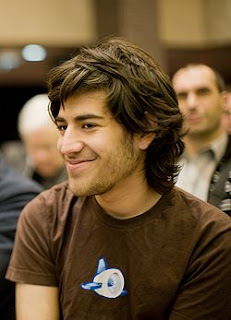 On the topic of internet information / content freedom (and my regular readers know how I feel about the internet in general), I intend to update the blog tomorrow to talk about the Aaron Swartz travesty and and culpability of U.S. prosecutors Carmen Miranda Ortiz and Stephen Heymann. For background, see Scott Horton's piece here and Glenn Greenwald's piece here.


Wall-P might even show up to give us his certain-to-be-offensive corporate legal whoring take on the matter that (to quote Jonathan Swift) "pervert(s) the general reason of mankind."
*******