Exit Zero: Home from New Jersey, Back Inside the D.C. Bubble -OR- Unplanned Interim Entry 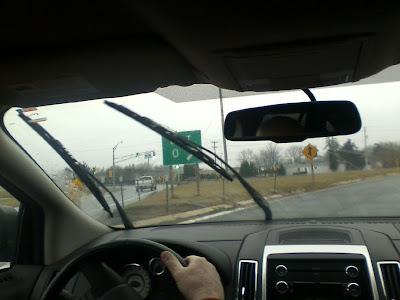 
I am back home in my D.C. Bubble world and reality after my New Jersey weekend visit to attend (with my parents*) my great Aunt Babe's 100th birthday party and to visit my friends Chris C. and Jon K., the former of whom I had not seen in 30 years.
*To clarify, I went to New Jersey with my mom and stepfather (Ray) and my dad came up separately from Florida. Ray did not go to the actual birthday event. 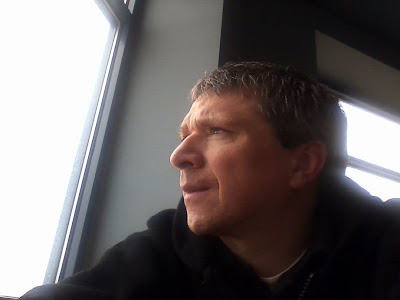 
My dad headed back to Florida today (I'm unsure where he reached by nightfall and looked for a motel but probably into North Carolina) while the three of us returned via the Garden State Parkway, a wintertime crossing on the Cape May - Lewes ferry, and a drive across the Delmarva and the Bay Bridge into Maryland. I was dropped off at the New Carrollton Metro around 730PM (well after it got dark) and went straight to the gym (my National Capital YMCA) (fortunately, I was able to get a large locker for my travel duffle bag). I was able to meet Tony tonight (my personal trainer) and then came home. I walked up 17th Street through the D.C. gay mafia's territory and to the Safeway and thence home.
Having experienced what I did this weekend -- including reconnecting (even if momentarily) with so much extended family I've not seen in years-to-decades -- their crummy little D.C. world, and what they are and represent seem much less important. 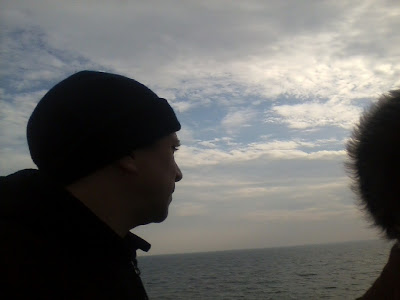 Yours truly (and my mom -- that's her coat) briefly outside on the deck of the MV Cape Henlopen ferry during a wintertime crossing of Delaware Bay, 3:14PM January 28, 2013.
The Cape Henlopen ferry is among the smallest ones in the fleet of five ferries that make up the Cape May - Lewes Ferry fleet. As we were boarding, we saw that all five ferries -- the entire fleet -- were lined up along the Jersey side.
*******


Anyway, this entry is just to note the following: (1) I still fully intend to post the three specific entries related to my New Jersey visit in the next week or so; but (2) I will probably not get the first one posted until at least Thursday night and possibly over the weekend (when I will try to post at least two of the three). 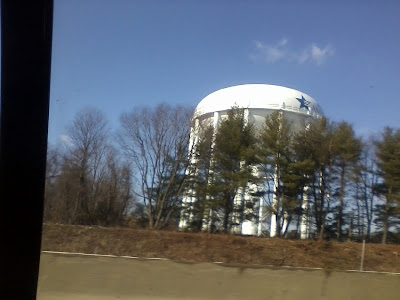 The giant spaceship-like Cherry Hill watertower as seen along the New Jersey Turnpike, 12:57PM January 26, 2013. That is probably the same watertower from the early 1980s that I recall but with its most recent coat of paint.
*******


Concerning the second point above, I am still waiting to get some other pictures that I did not take. And I am not even taking the computer home from work** tomorrow and possibly not on Wednesday either. Thus, my next update may not be until Thursday night and possibly not until my Friday night musical interlude entry.
Thus, please don't expect any entries for the next few days.
**Yes, I return to work tomorrow (or technically, later today). I think everything is OK with no surprises.
Before ending, though, I would like to post the following picture: 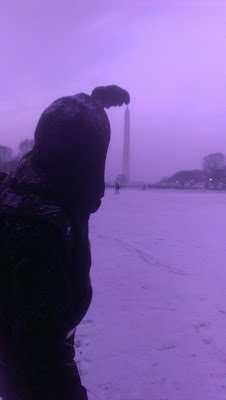 I had intended to post this one in my Friday night entry but DD (or DPD -- I think that's how I shall refer to him on this blog) didn't send it to me until Saturday evening. By way of explanation, it is a picture of me on a (briefly) snowy evening around 5:30PM on January 25, 2013. DPD took the picture as we were walking across the National Mall after work. We work by L'Enfant Plaza and once in a while do this walk.

This Jan. 25th snowfall "officially" dropped 0.4" at Reagan National Airport climate station (KDCA), adding to the 0.4" that fell the previous day. This brought the seasonal total to an underwhelming 1.0 inch exactly. 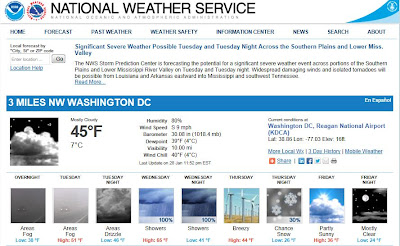 Looking ahead, the weather is forecasted to get much warmer (highs around 65F on Wednesday) with locally heavy rain showers and possibly out-of-season thunderstorms into Thursday. Thereafter, it will get seasonably cold again with highs around 36F on Friday and Saturday.
OK, that's all for now until my trio of New Jersey visit themed entries.
--Regulus