A Little Bit of Snow -- Take 1 and Take 2; Seeing the World on a Bright Cold Winter's Day 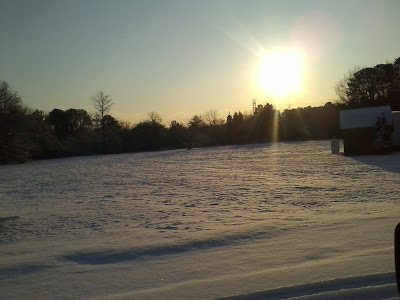 My mom took this picture of the lightly snow covered field behind her trailer park in Millersville, Maryland with the morning Sun rising above a distant row of winter bare trees. This was taken at 8:16AM on January 24, 2013 as she headed to work in Severna Park.
It looks like about 2" fell -- in line with nearby BWI Airport's total.
********


OK, I'm going to try to do the near impossible for me in my blogging and post TWO entries tonight -- a weather-themed and a political-themed one -- in short order. 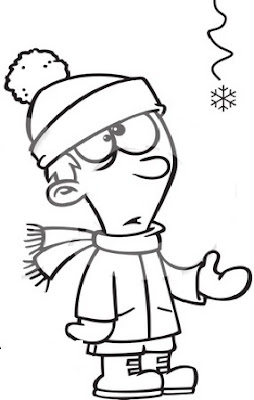 The Washington, D.C., and Baltimore areas had a 1 to 2 inch snowfall last night, or rather in the wee hours of this morning although the "official" District of Columbia climate station -- our old favorite, Reagan Washington National Airport (KDCA) -- only had 0.4" while Baltimore/Washington Int'l Airport climate station (KBWI) had 2.0" and Washington Dulles Airport (KIAD) had 1.5" of snow.


I guess Mark Richards and his magical snowboard and ruler were working their usual tricks.
The snow was falling lightly but steadily when I went to bed last night. 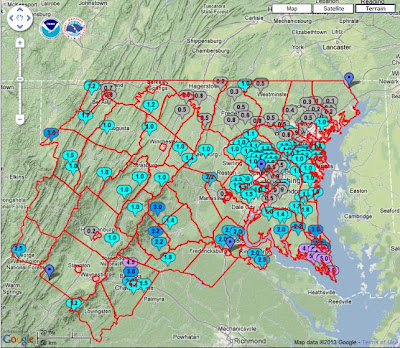 The 12-hour snowfall map for the Sterling (LWX) county warning area (CWA). The map is also available here and you can zoom in on specific amounts. However, this link will only remain active for this event for a short period.
******* 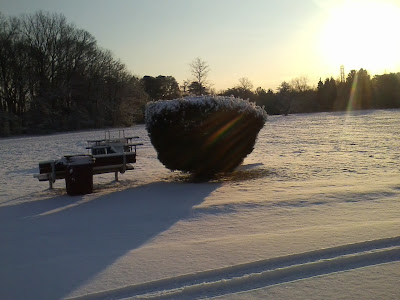 Another picture my mom took this sunlit morning of the snow covered field with a snow-dusted bush and picnic table at the trailer park in Millersville, Md., 8:15PM, January 24, 2013.
*******


Another weak clipper system is progged to cross the area tomorrow afternoon into tomorrow night with 1 to 2 inches of additional snowfall. There are no winter weather advisories out in the immediate area, though. 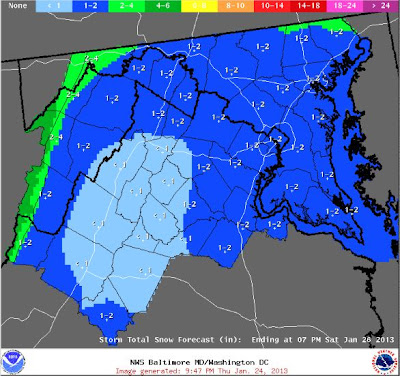 The snowfall forecast issued at 9:47PM tonight valid through 7PM EST January 26, 2013.
Yes, this is the snowfall map of death in that any snow event it shows is steadily whittled away to nothing.
*******


I would like more snow, but in this case, my dad is leaving Flagler Beach, Florida tomorrow morning and starting on his two day trek to New Jersey for Aunt Babe's 100th birthday party on Sunday. He should be in central North Carolina by tomorrow night to stay at a motel somewhere and given that he is 72 years old (as of yesterday) and not used to real winter weather and doing all the driving, I would prefer there not be deep snow or treacherous ice.
As it is, my mom and I (with Ray along) should still get to New Jersey before he does on Saturday. 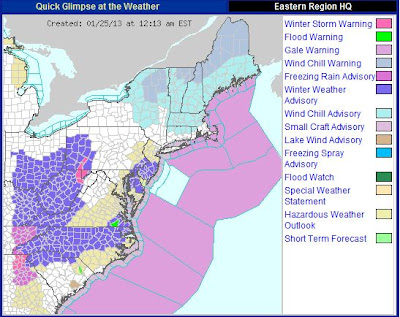 NWS eastern region advisories updated at 1213AM EST January 25, 2013. Yes, this image was captured after the original timestamp on this entry.
*******


As for the cold air, it has actually been below freezing at the KDCA climate station since the midnight Jan. 22 reporting hour -- so as of this hour, that is 72 hours, which is quite long by our recent standards. Today it only reached 29F for a high, the third consecutive daytime high below 30F (it was above 30F in the wee hours of the 22nd). This makes it the longest such stretch since Jan 15-17, 2009. However, as of Jan. 23rd, KDCA was STILL running +4.6F above normal for the month.
The CWG had an interesting post on Jan. 22nd that seeks to put this cold outbreak in D.C. in historical perspective.
Highlights ... 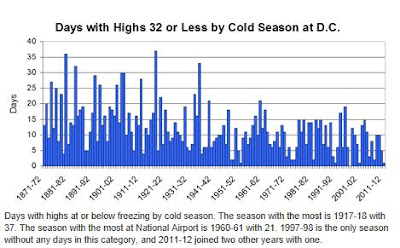 
1. The downward trend in number of days with highs below 32F. I think this is more than just an artifact of having the climate station at KDCA. It is also a signal of climate change in the past century (sorry, Teabaggers and rightwing cable / talk radio / media entertainment complex).
2. This description is somewhat at odds with what it states in the CWG entry where it states: "Only one year has featured a day without a high at or below freezing. It occurred in 1974, when the coldest high temperature was a balmy 33 degrees on January 13. Last year wasn’t far behind with only one day reaching 32 degrees."
In terms of extreme cold temperatures, the same CWG post has the following image to make the case: "Though the climate record goes back to the 1800s, since around the time of the station switch to National Airport the coldest of the cold temperatures have seemingly vanished." 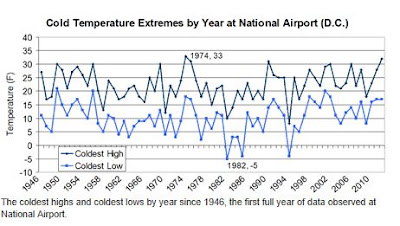 Remember that this is a plot of extreme low highs and extreme low lows only -- linking each from year to year. Given the very limited data points in it, I don't think this a particularly useful time series. There doesn't seem to be a specific trend in any of this except maybe on the extreme low lows in the past 30 years.
However, the CWG post makes its larger point by contrasting this set of numbers to those that come before KDCA was the climate station: "For instance, 19 years prior to the switch in 1945 had 'coldest lows' of zero or less. At National Airport, lows have dipped below zero in only three years."
Note: This puts the switch to KDCA in 1945 with 1946 the first full year. I always thought it was 1941, but I've never been sure on that one.
******* 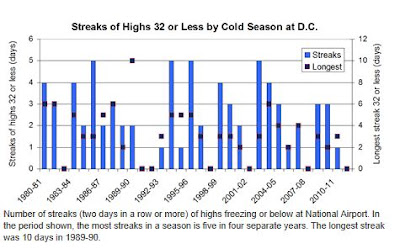 Caption: "Number of streaks (two days in a row or more) of highs freezing or below at National Airport (left axis). In the period shown, the most streaks in a season is five in four separate years. The longest streak (shown on the right axis) was 10 days in 1989-90."
********


The remaining two pictures in this entry are of the smog and smoggy fog that has intermittently choked Salt Lake City this winter (as it often does in winter). As one commenter wrote in the Yahoo article, Salt Lake City is our own little version of Beijing with its "crazy bad" winter air. 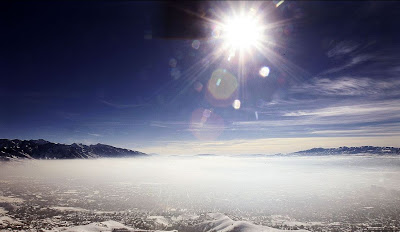 Smog trapped over Salt Lake City and its basin on a brilliantly sunny winter day as seen from the snow-capped Wasatch Range above the city on January 9, 2013.
*******


A warm up is forecasted in the D.C. area with temperatures at or just above freezing by Saturday, rising into the 40s by Monday, and near 60F by Wednesday followed by colder weather for the start of February. The next weather system around Wednesday should be mostly or all rain. 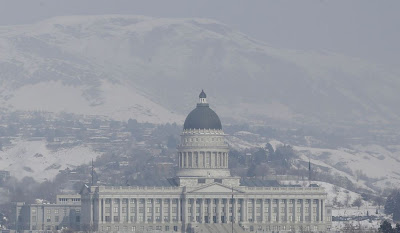 The Utah State Capitol building seen through a blanket of smoggy fog -- like the old London "fog" of the 1950s and '60s -- on January 23, 2013.
Just wonderin' ... What's the proper hybrid Mormon - libertarian response to choking air pollution? At least here the GOP legislature doesn't have to savagely gerrymander is districts and its electoral vote distribution to help the Republican politicians otherwise facing demographic extinction. Utah will be naturally "red" for a long, long time.
*******


OK, my plans for a second entry tonight need to be nixed as I am posting this entry in completed form at 1:15M. (The original posting was just to have a Jan. 24th time stamp.) As it is, I'm quite exhausted and the past 24 hours were difficult although work itself was OK and I had a good workout at the gym tonight.
I am going to meet my mom on Saturday morning at BWI rail station (taking an Amtrak there from Union Station) rather than going to her place on Friday night. Thus, I also post to plan a Friday night musical interlude entry.
--Regulus
Posted by Regulus at 11:50 PM