Yesterday in Newtown, Connecticut; Today and Tomorrow in Anywhere, U.S.A. -OR- The United States of Firearms 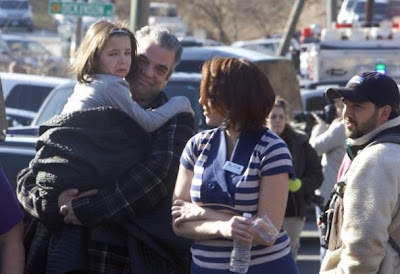 Family members pick up a traumatized young girl outside Sandy Hook Elementary School in Newtown, Connecticut following the mass killing inside the school on December 14, 2012.
*******


I wrote the bulk of this yesterday, Friday, December 14, 2012 ...
Another day, another mass shooting in these United States of America, though this one is particularly ghastly in its victims and scale. 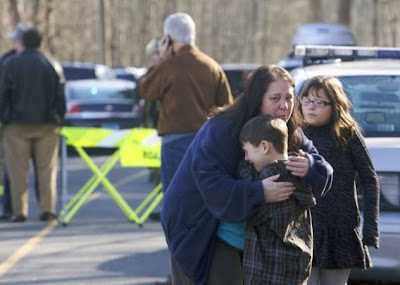 
Today's occurred at an elementary school and involved the deaths of 26 people, 20 of whom were young children between the ages 5 to 10 as well as 6 teachers / administrators at Sandy Hook Elementary School in Newtown, Connecticut.
Story here. 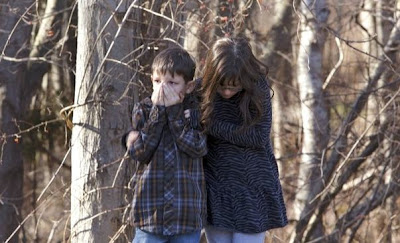 The same two frightened children as in the above image stand outside the school in its semi-wooded location in Newtown, Conn., Dec. 14, 2012.
*******


The gunman, Adam Lanza, 20, was also killed, or rather it appears he killed himself. In addition, it appears that he killed his mother earlier in the day. Of note, there were preliminary reports that she purchased the guns used in this case. 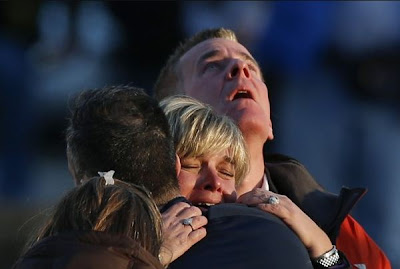 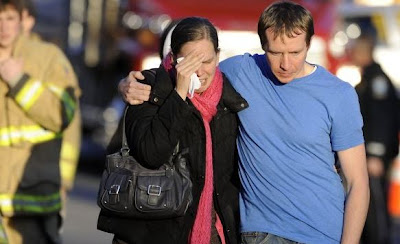 A man -- the same one as in the image two above and possibly a father of one of the children inside Sandy Hook Elementary School -- tries to cope with the enormity of the situation.
*******


While White House spokesman Jay Carney idiotically said that today "is not the day to talk about gun control," the usually cool and reserved Pres. Obama nevertheless gave comments while holding back tears that are worth showing ...
President Obama makes a statement at the White House on the elementary school killings in Newtown, Conn., December 14, 2012.
*******

I  really have nothing f/cking more to say about this.

The NRA** ( "enabler of mass murderers" Rep. Jerrold Nadler called it) and larger GOP Death Star with their "Second Amendment remedies" Tea Party types were momentarily silent* -- except for some random rightwing offensive and appalling tweets.


**YES, I'm aware that this is an image of the Depression era National Recovery Administration logo rather than that of the National Rifle Association.
Mostly, they're just waiting for things to settled down and to  get their responses coordinated at Grover Norquist's weekly GOP group-grope. 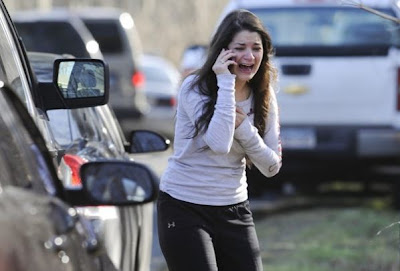 A woman makes a frantic cell phone call on her cellphone outside Sandy Hook Elementary School in Newtown, Conn., December 14, 2012. Her sister is a teacher at the school.
*******


But the Unlimited Firearms-for-All lobby know they needn't fear anything in terms of ANY regulation whatsoever on the unlimited flow and ownership of ANY TYPE of semi-automatic firearms in America including Non-Bizarro World things such as background checks and limitations on high-capacity magazines or rounds per minutes. 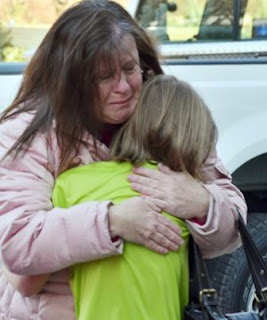 That's because there isn't the SLIGHTEST chance that this will change the dynamics of America's deep-seated psycho-sexual love of guns -- the bigger and more fire-powered, the better -- will never change. At least not in my lifetime.


Because America's love of firearms is simply too great and too deeply engrained in the country's collective psyche, especially among conservative white men, who continue to have disproporationate power in the manner that the Republican party overall has disproporationate power at the state and Congressional level thanks to massive post-2010 Census gerrymandering by the GOP. 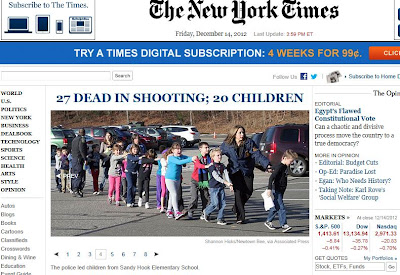 
I can't help but also think that at some deep level, there is something about these grisly and horrific events that cause some sick titillation in the collective American psyche, as if it were an action adventure movie.  Additionally, these events play directly into and enhance the beliefs among those who form the core of America's firearm fetishists, to wit, the white males I mentioned. 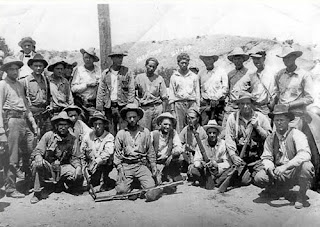 They forever fantasize about being part of some Spirit of '76 militia or 19th Century Wild West Posse Comitatus group.


Or in their fevered Fox News imaginations, they fancy they'll be fighting invading armies of "godless hordes" from Asia, the United Nations, radical Islamists, and extra-terrestrial aliens in whatever movie they just saw last Friday night. 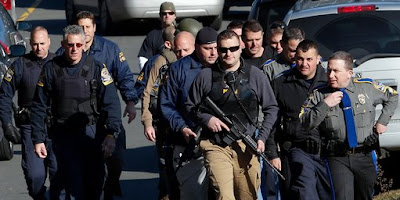 Very heavy police presence outside Sandy Hook Elementary School in Newtown, Conn., following the mass killing on December 14, 2012. The story is that the gunman killed himself, although police are not yet releasing details.
*******


As you can image, the 24/7 tilt-a-whirl media complex was on this all day. This is at the nexus of big news, big emotions, big controversies, big ratings, and big profits to them. (Wall-P must be pleased.) Having said that, I think that Ed Schultz and Rachel Maddow were quite good on their respective MSNBC shows tonight. 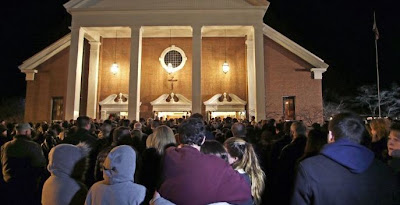 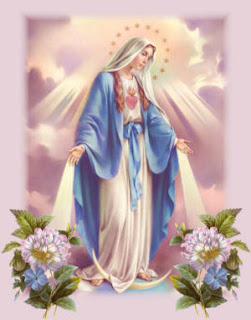 I can understand the comfort part, but answers? Really? The Catholic Church offers nothing in this or any traumatic situation but a bunch of gibberish that is borderline morally offensive: The Pope telling us to "pray for all the victims and the gunman" and that the Blessed Virgin Mary is smiling sweetly down?


What? You mean that She is in rapt attention at the Beatific Vision of what She sees??
As for the Protestant fundies in the Old Confederacy, and all the loopy libertarians Teabag types everywhere in the U.S., they're deep inside their Fox News and talk radio bubble, sputtering incoherently that anyone would question the glorification of unlimited firearms of whatever caliber on demand. 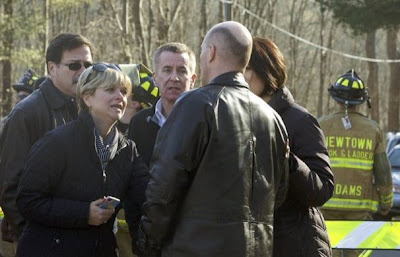 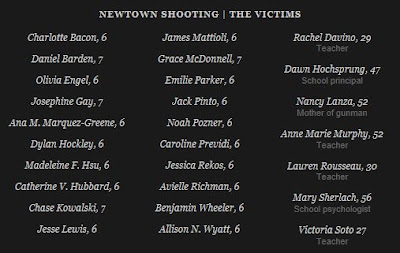 
Oh, and then there's all the sh!t about a search for "a motive" on the part of the killer. Who gives a f/ck about his "motive"? What does that do or change??
I'm done with this entry.  It's just going to happen again and again and nothing will change, and that's the worst part.
Updated 12/15/2012 (prior to posting): 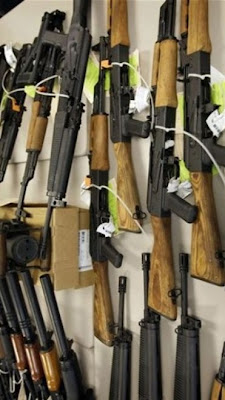 Ooops, I spoke too soon about the NRA and the Machine Guns-for-All Lobby not having anything to say. The word has gone out and already they are flooding the media-scape en-masse demanding STILL MORE firearms, more firepower, more guns ablazin' at all times because 300, 600, 900 million just isn't enough. They are DEMANDING unlimited semi-automatics from cradle to grave, and looney-toons GOP'ers and wussy Dems will give it to them.


Only then will America have achieved her Manifest Destiny, and will we truly be able to declare those immortal American words: "Praise the Lord and pass the ammunition!"
Updated 12/15/2012 610PM: To show you the sociopathic nuttiness of America's fetishistic firearms fixation, here is the response of Larry Pratt, Executive Director of Gun Owners of America at the mass killings.
Meanwhile, Steve Kornacki makes a very good point that Dems don't need to be terrified of the Gun Lobby to win elections since the states where that could have mattered -- AR, KY, MO, TN, and WV -- are already solidly Republican and Dems are seen as favoring "confiscation" of all firearms anyway. 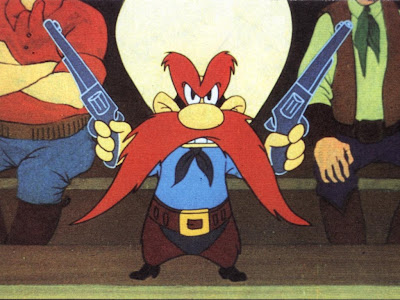 What a Glorious Day it will be when ALL Americans* are their own Yosemite Sam wannabes huntin' down the varmints and galoots!
*That is, angry, explosive-tempered, rightwing, white guys with extreme libertarian views and yammering endlessly about the gold standard. While some of these guys have money, many more are just working class stiffs in steady economic and financial decline being fed a steady diet of talk radio and Fox News prole-feed. And if anyone tries to interrupt them and do something like limit the purchase of semi-automatic firearms or provide them subsidized health insurance for their families, well, then, it's The Turner Diaries time.


Anyway, let me end with this heated discussion on Piers Morgan's CNN show last night on the topic of gun control. Morgan sort of lost it at his guests.

Next up, more on the bullsh!t "fiscal cliff" manufactured crisis with the GOP actually mentally incapable of actually making a meaningful proposal for the reasons that Paul Krugman pointed out brilliantly yesterday. However, I think I will talk about that in a separate entry.
I may actually have one more entry today.--Regulus
Posted by Regulus at 3:52 PM