Some Thoughts on Larry Hagman and the Unlikely Gay Bar Offspring of J.R. Ewing


Hagman died from complications due to cancer (possibly throat cancer). He died Friday, Nov. 23, 2012 at Medical City Hospital in Dallas, Texas. He was 81. 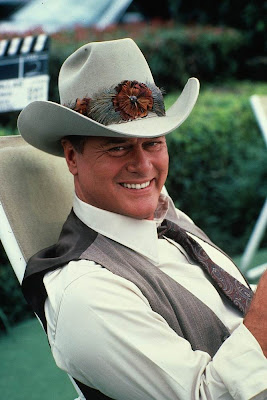 Hagman will forever be remembered, of course, for his role as the -- to quote the obituary in The New York Times -- "the gleefully malevolent wheeler-dealer J. R. Ewing on the long-running television series Dallas" which "(i)t is estimated that at the height of its popularity ... was seen by more than 300 million people in 57 countries."


Note: The above quote appeared in the original version of the NYT obituary last night. It has since been edited away in the linked version.
To that last point, I've often thought that many ways, both Dallas and show Baywatch in their respective ways defined the culture, attitude, and style of United States of America to the rest of the world -- hence both shows' incredibly popularity with audiences in so many disparate and far-flung countries across the globe. 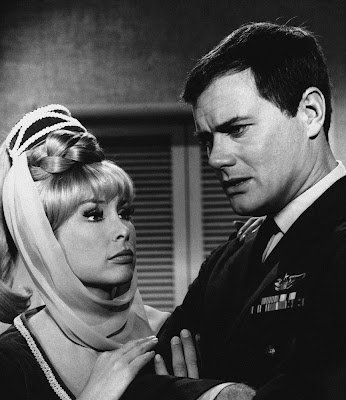 He was also known for his role as in I Dream of Jeannie (1965 - 1970) as NASA astronaut Maj. Anthony Nelson who -- in the opening minutes of the pilot episode -- crash lands on a deserted South Pacific island beach after a failed trip into space, happens upon the strange lamp on a beach. 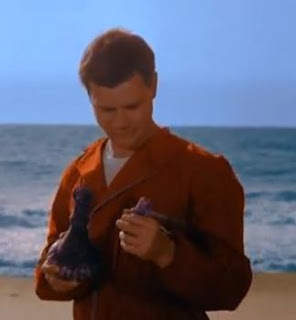 He uncorks the bottle and out emerges in a vaporous cloud a 2,000 year old scantily clad and slavishly devotional genie named Jeannie, whom he can then never get rid of her through many funny situations -- and eventually he marries her.


Hagman died reportedly with both Linda Gray (who played his wife Sue Ellen Ewing) and Patrick Duffy (who played his brother Bobby Ewing) at his hospital bedside.
Here are some other obituaries where you may read more details about his overall life and career. 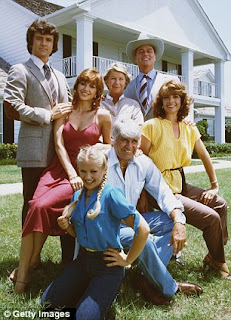 
The Yahoo obituary (third link above) has the following quote from Linda Gray:
"Larry Hagman was my best friend for 35 years ... He was the Pied Piper of life and brought joy to everyone he knew. He was creative, funny, loving and talented, and I will miss him enormously." 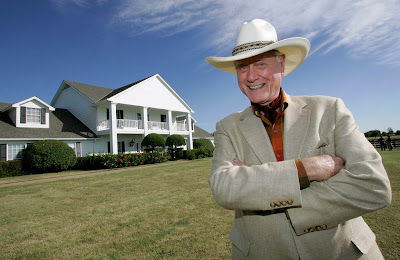 Larry Hagman poses in his signature stetson outside the Southfork Ranch on October 9, 2008. The place was the setting of the fictional "Ewing Mansion" and is today in fact a conference and event center located in Parker, Texas about 25 miles north of Dallas.
#######


I used to watch the show Dallas every Friday night back in the early 1980s and was enamored of the opening theme. Furthermore, I remember my paternal grandparents watching it with my grandmother's brother and sister-in-law (Joey and Rosemary) and younger sister (Aunt Babe -- she who will be 100 years old this coming January). They watched it in the back "den" of our house at 368 Kirby Avenue in Long Branch, N.J. 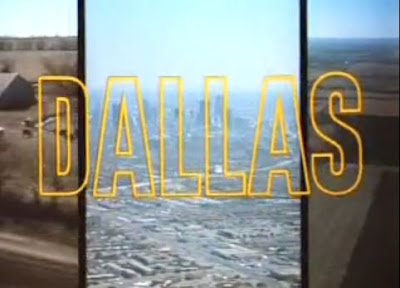 
And on a related note, my stepfather Ray was stationed in Fort Hood, Texas from Jan. 1980 - Nov. 19871, and as a result, I lived in both Copperas Cove and then Killeen during that time at the age of 10 and 11. I first visited in the summer of 1980 from New Jersey and then returned in January 1981 to live, although I spent the summer of 1981 in New Jersey (mostly in Long Branch and Sea Bright at Tradewinds Beach Club).
This was the point at which my 1970s New Jersey life ended as my grandparents sold the house in Long Branch and moved into the Oceanpointe Towers senior citizens apartment complex in Long Branch and my dad moved to his new log cabin house out in Upper Freehold Township, New Jersey. (But as I alluded to above, I would still spend my summers in New Jersey, esp. in Long Branch and Sea Bright, recently devastated by Superstorm Sandy, until about 1988.) 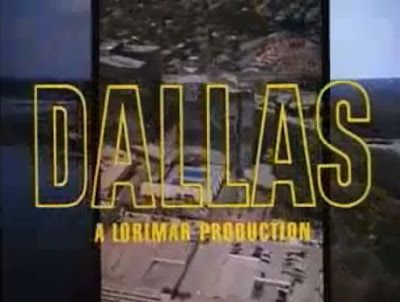 
Anyway, in the early months of 1981, I developed a fixation on the City of Dallas the city, in particular, its skyline as seen on approach from the south on I-35E. 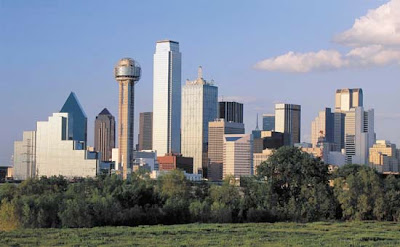 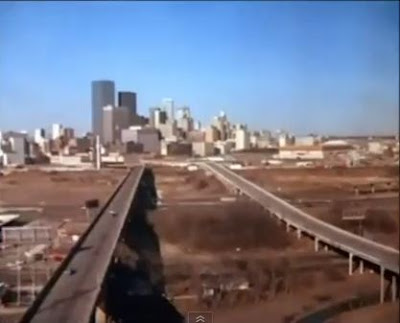 Although in 1981, the Dallas city skyline looked more like it does in this screen capture image that appears at the start of the opening sequence to Dallas. This particular fly-in shot appears in at least the first five seasons of Dallas (and maybe more).
Updated 4:00PM 11/25/2012 to include picture directly below. 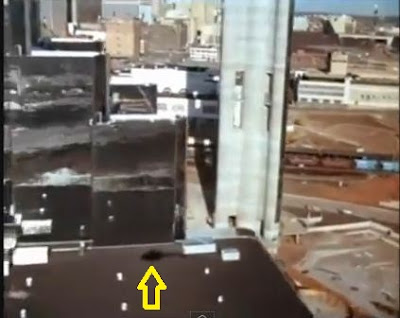 Note: Reunion Tower is not in that fly-in scene. I'm unsure if it's because the building, completed in 1978, is just out of the shot or if this is actually an older image that was used in this opening fly-in sequence. Given that you subsequently see a helicopter's shadowed reflection on the buildings next to Reunion Tower (see above image), I am guessing this was filmed on the same day, and so it is the former reason rather than the latter.
#######


As an aside, I also had a fixation on Troy Dungan, the famous bow tie-wearing long-time weatherman on WFAA channel 8 who finally left the station in 2007. Indeed, I developed my interest in meteorology living in Texas all those years ago.
Speaking of Troy Dungan, here is a Vimeo video of him I found set to an Enya tune on the occasion of his 30th year at WFAA in 2006.
**Vimeo video removed**


Apparently, I wasn't the only one captivated by this curious little weather man.
###### 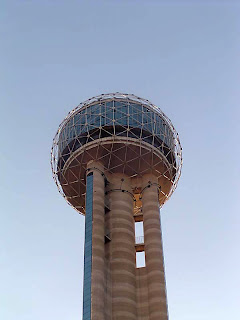 My mother arranged for me to meet him on the occasion of my 12th birthday (11/26/1981) as we were leaving Texas, driving to Maryland to start our life there (and what would eventually become my life in D.C.). We also had dinner atop Reunion Tower in what was until recently the revolving Antares restaurant but is now called Five Sixty.


For these reasons, I always had a close spot in my heart for Larry Hagman and the show Dallas even if it embodied some cartoonishly horrible morality and values that are form a caricature of the American dream, Texas-style.
#######


As for my current life in Washington, D.C., I would also like to note a connection between Larry Hagman and Dallas and the D.C. gay community. I refer specifically to the bar known as JR's Bar and Grill on 17th Street and to its management. 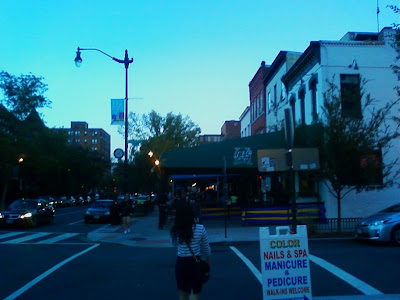 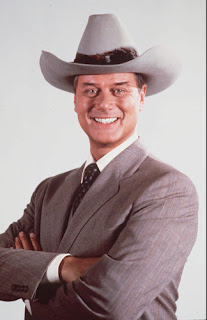 Long story short, JR's is called JR's because -- back when it opened in 1986 -- it was actually associated with the long-time gay bar JR's in Dallas. The Dallas JR's also has a "sister" lesbian bar called Sue Ellen's, also in Dallas.


Thus, the "JR" in this bar franchise can trace its origin to J(ohn) R(oss) Ewing, played by Larry Hagman.
This is odd in that Dallas was a VERY un-gay show with -- to my knowledge -- not a single gay character in the show's original 13 year run from 1978  to 1991.
The D.C. JR's has long since been its own establishment with no affiliation to the Dallas one. There was also a JR's in Denver run by the same owner as the D.C. one, interestingly, also on 17th Street, or rather, E. 17th Avenue but it closed in Nov. 2011.
As for the D.C. JR's, both it and its co-owned sister establishment, Cobalt / 30 Degrees, are operationally run by a small but remarkably enduring cabal that I often refer to in a semi-satirical way as the D.C. gay mafia.
** Updated 3:13PM 5/31/2014: Content removed** 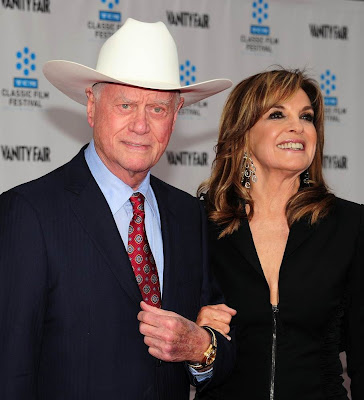 
At this point, it would be good to end on a relevant musical note, so here the opening season for Section 2 of Dallas with its Texas-sized, over-the-top orchestral score.
#######


I wrote the above entry earlier this afternoon and tonight. It took frickin' forever to draft. Nevertheless, I made it to the gym and had a decent work out and swim in the pool.
I went out last night but it was cut short because I lost some money, probably on the floor at No. 9. I will try not to do that tonight. I really need a money clip.
--Regulus
Posted by Regulus at 9:58 PM