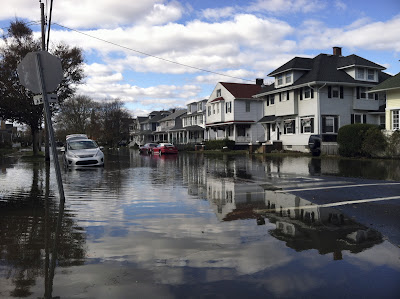 
I am feeling guilty that I have not posted the remaining pictures of damage and destruction from Hurricane Sandy. I feel a particular affinity for the Jersey shore -- since I'm from there many years ago -- and the New York City area, and I want to the extent that I can bear witness (remotely) to what happened. However, my blogging schedule is limited during the week (only at night). 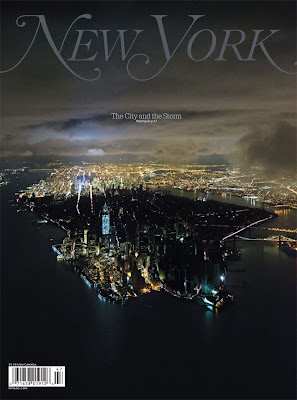 
A case in point is tonight ... it is nearly midnight as I write this and it will be after midnight when I post this entry. Yet I have to get to bed within an hour. This follows a regular work day and a rather good night at the YMCA gym with my personal trainer plus on the treadmill and in the swimming pool. To post one of my full entries takes hours to compose. This is why I probably won't be able to post it until the weekend.
In addition, there is the slight matter of the presidential election tomorrow -- or rather, at this point, today, Nov. 6th. I want to write about that as well. 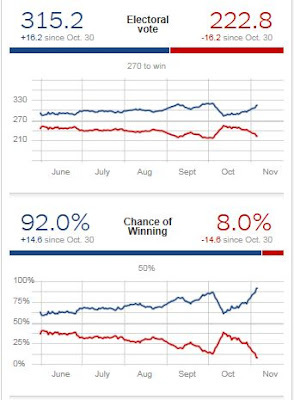 As for the election, I've no idea what's going to happen. On the one hand, the inestimable Nate Silver now has Obama's odds of victory pegged at a whopping 92.0 percent to Romney's 8.0 percent.* He also posits an Electoral College win of 315.2 to 222.8.  Both charts through tonight are shown at left.


*This refers to the odds of an Obama victory, not the percentage size of the win; the size of that win is unlikely to be more than 1 percent either way.
Silver's analysis is based on his model that inputs the blizzard of swing state polls and all the national tracking polls. The former show a clear Obama advantage while the latter have moved noticeably in Obama's direction in the past two weeks.
Silver himself is now an object of VWRC fear and loathing because his analysis involves things they don't understand and loudly reject the results. The mainstream and GOP mediawhore pundits also hate him because he upends their useless opinion-mongering and propagandizing. 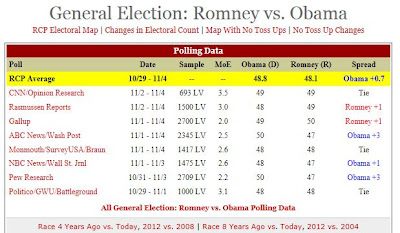 And the RealClearPolitics site presently has Obama over Romney by an average of 0.7 percent at 48.8% to 48.1% (see above for image of the most recent polls), even if its Electoral College map has been frozen for weeks with all the swing states still shown as toss-ups undecided. Oh, yes, I concur with Paul Krugman who observed that it is a Republican-leaning site, what with all its tons of links to rightwing commentary. 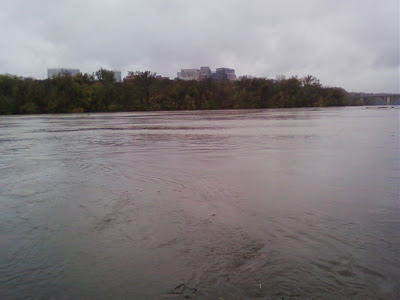 The Potomac River looking toward Teddy Roosevelt Island (with the Rossyln skyline visible behind it) in the wake of Hurricane Sandy, 5:03PM, Oct. 30, 2012. The river was very nearly at flood stage and there was basically raw sewage coming out of a discharge pipe near the Rock Creek's discharge point. Marvelous.
#######


But on the other hand, given the sustained GOP voter suppression drives and obstacle-making -- consider Ohio's current far righting Secretary of State Jon A. Husted and Florida's vile and creepy Gov. Rick Scott -- I just don't see how this election is going to turn out. 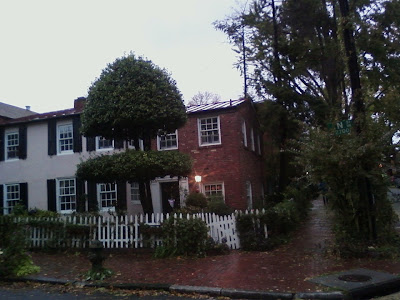 
And I can't figure out if all the GOP Death Star commentary including the heavy hitters such as Dr. Chuckles Krauthammer, George "Citizens United" Will, Michael "Gasbag" Barone, Peggy Noonan, and the like predicting a convincing Romney win is just internal self-deluding propaganda or because they know the Romney / Rove game plan.
Anyway, long story short, I really no idea what is going to happen later today. 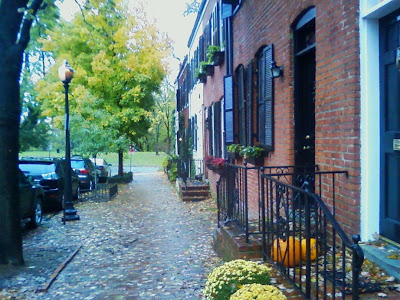 
I intend to vote tomorrow morning at the Garnet-Patterson High School over on 10th Street where I typically vote here in D.C. Of course, voting in D.C. has a kind of postmodern reality to it -- it truly is meaningless. That's because, of course, the District of Columbia has no voting representation in Congress. In addition, its local city government is uninspiring and ineffectual at best, corrupt and stupid at worst. The city bureaucracy is to a significant extent frozen in time the way it was during the Mayor Marion Barry heyday of the mid to late 1980s. But let's not have that conversation right now.
Oh, yeah, I won't be voting for our D.C. Congressional Delegate Eleanor Holmes Norton. I never do for a variety of reasons that I'll refrain from delving into right now. As it is, Norton will almost certainly win as she always does with 88 to 90 percent of the vote. Alas, Queen Noble of the H.E.R.O.S.H.E.R.O. party (yes, it's an actual "backronym") is not the ballot this time.
Here was Queen Noble's campaign video for her 2010 run. I may have posted this before, or at least images from this video. It was filmed somewhere in Southeast D.C. in summer 2010.
The video with her stream of consciousness is nothing less than a work of art with lines such as: "Is what it is, this is what it is ...";"Please note that America is a stolen country..."; "This is captivity ...").

As I recall on the 2010 D.C. voter guide, she was suing the U.S. Government for $994 trillion (yes, TRILLION of the American sort) for ("SWIFTLY AND IMMEDIATELY") slavery reparations. Even as a number, that's about an order of magnitude more than total world GDP (approx. $80 trillion in 2011 dollars / Purchasing Power Parity), but never mind that.
Oh, yeah, I had a unpleasant argument about a month ago at Larry's Lounge with the libertarian party candidate on the D.C. ballot this year. But it's too late right now for me to get into this topic -- maybe some other time. 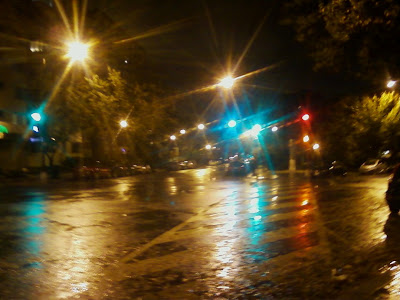 A stormy electric night in the "soft city" as Hurricane Sandy dropped heavy rainfall on Washington, D.C. This was shortly after the rain had ended and winds died down (as I noted in an earlier entry, it never really got that windy in the D.C. or Baltimore areas owing to the presence of a cold air inversion at the surface). This was at the corner of 17th Street and New Hampshire Avenue at 12:31AM, Oct. 30, 2012.
#######


OK, that's all for now. My next entry won't be at least until Wednesday night on the other side of the election. And, as noted, my entry with a series of Hurricane Sandy aftermath pictures will probably have to wait until the weekend.
--Regulus
Posted by Regulus at 1:39 AM