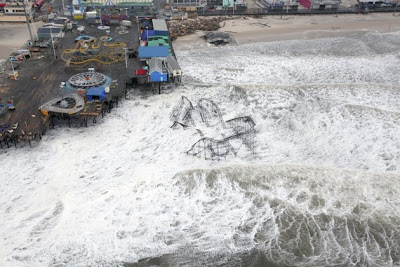 Aerial view of post-Hurricane Sandy devastation of the amusement pier with its roller coaster on a pier in Seaside Heights, New Jersey, October 30, 2012.
#######


I tried to post a new entry tonight but I didn't start it until 11:40PM and it is already 1:45AM and all I managed to do was upload a series of random images of destruction and damage from Hurricane Sandy. 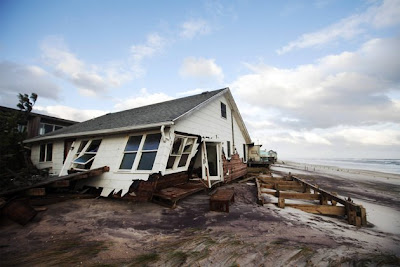 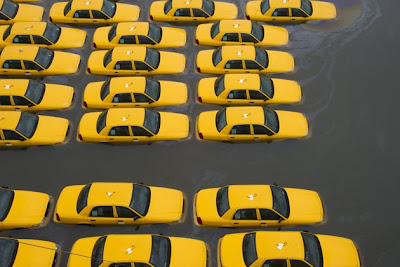 Flooded taxi cabs parked in Hoboken, N.J., October 30, 2012. Much of the city -- which actually is apparently a bit BELOW the level of the Hudson River in places -- flooded badly and there were at least 20,000 people trapped in their homes last night. The National Guard moved in to assist.
The flood waters from the storm surge is a toxic and dangerous combination of sewage, fuel oil, gasoline, chemicals, garbage, and downed power lines.
####### 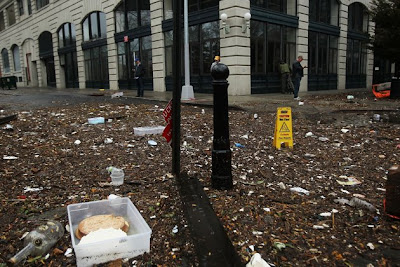 Debris clogs the streets of the "Dumbo" -- Down Under the Manhattan Bridge Overpass -- neighborhood of Brooklyn, NYC as a result of the flooding / storm surge caused by Hurricane Sandy, October 30, 2012.
####### 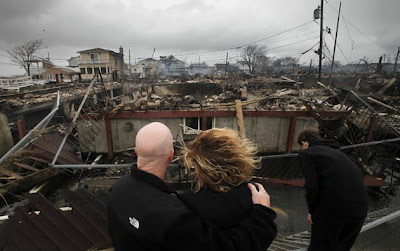 Robert and his wife Laura survey the devastation of the Breezy Point, Queens neighborhood in New York City due to a massive fire triggered by downed power lines and/or exploding tranformers during the height of Hurricane Sandy. Firefighters could not reach the fire. This picture was taken October 30, 2012.
#######


I want to post more pictures of the destruction and flooding damage caused by Hurricane Sandy (now being called "Superstorm Sandy") in New York City and in many places in New Jersey, including along the Jersey shore. The destruction is widespread and indeed, as Chris Christie said, "unthinkable." Christie -- who for whatever his complicated reasons is suddenly Democrats' best Republican friend -- was with Pres. Obama on Wednesday to assess the damage and quickly get an effective Federal response with appropriate level of resources. 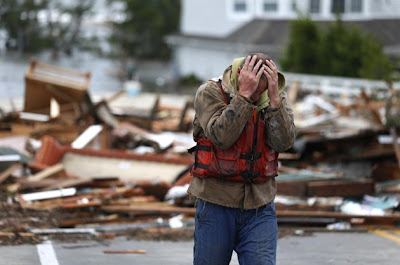 
Oh, and Mitt Romney's "privatize" FEMA / unworkable bullsh!t response from this or that D.C. conservative and/or libertarian think tank or libertarian magazine reader doesn't seem all that appropriate or useful right now. Ditto his semi-bogus canned goods fundraiser in which his own campaign spent $5,000 at a Dayton, Ohio Walmart to "grab anything" and pretend it was given spontaneously by those at the rally the next day. 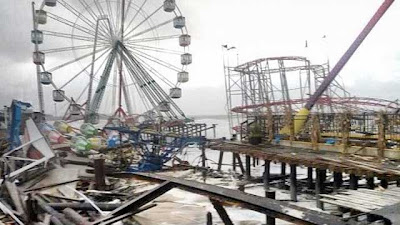 Another view of the pier in Seaside Heights, N.J., showing the destruction from Hurricane Sandy, October 30, 2012.
It will take well beyond next summer to get the shore back to anything resembling what it once did -- and for that matter, it will never truly resemble as it once did. There are going to have to be a lot of U.S. Army Corps of Engineers sand replenishment projects and a lot of construction.
#######


The total storm damage cost may be upwards of $50 billion, or on par with Hurricane Katrina. The death toll is now at least 54 --  and still climbing. The figure double that if you include those outside the U.S. in the Caribbean. I heard a figure of 122. 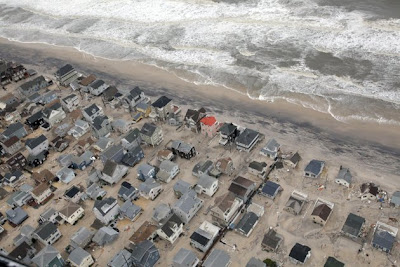 Aerial view of the Jersey shore on October 30, 2012 showing the devastation along the coastline as a result of Hurricane Sandy. I think this was around Seaside Heights, N.J..
#######


I will gather more images of hurricane damage including of my hometown of Long Branch and teenage summer years Sea Bright and post them over the weekend, ideally on Saturday. 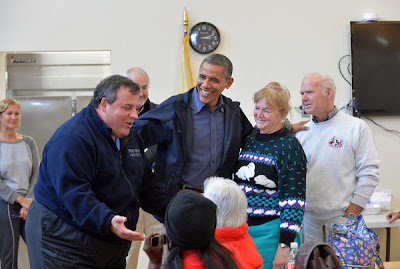 
Of note, the images I have posted so far earned me two (and possibly three) consecutive days of record numbers of page views on this blog including my first ever calendary day with at least 1,000 hits recorded on October 31st. Actually, based on my StatCounter, it reached 1,398 hits.
--Regulus
Posted by Regulus at 1:44 AM