A Very Good Election Night -OR- Forward the American Future 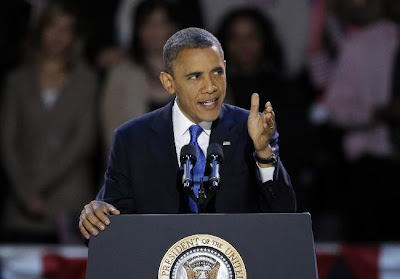 "I believe we can seize this future together because we are not as divided as our politics suggests. We're not as cynical as the pundits believe. We are greater than the sum of our individual ambitions and we remain more than a collection of red states and blue states. We are, and forever will be, the United States of America." 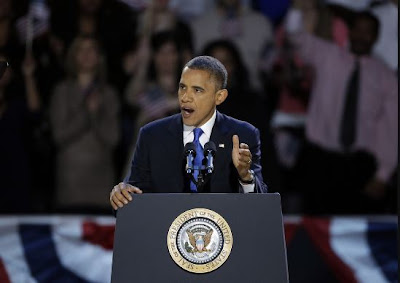 "And together, with your help and God's grace, we will continue our journey forward and remind the world just why it is that we live in the greatest nation on earth. Thank you, America. God bless you. God bless these United States."
Quoted from Barack Obama's reelection victory speech in Chicago on Nov. 7, 2012 video link here and the transcript.
#######


It was a good election night on Tuesday, Nov. 6, 2012.
President Barack Obama won a decisive and truly historic reelection and it was a very good night for the Democrats. 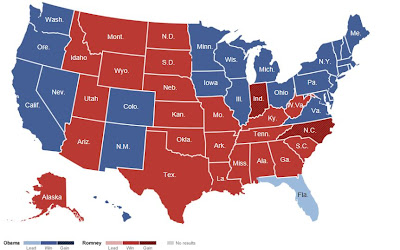 The red-blue state map of the 2012 presidential election results as of Nov. 8, 2012 with Florida as yet undeclared but leaning Obama. 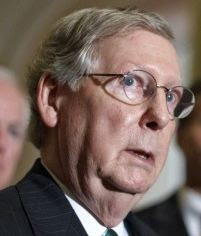 Furthermore, Republican self-delusion on so many issues helped faciliate their own defeat. This includes both the Republican party politicians, its demographically challenged electorate base, and the conservative/rightwing media machine from talk radio to Fox News and the internet.


As Joy-Ann Reid said on The Last Word tonight, this conservative media infrastructure has taken over and drives the Republican Party politically in a way that is damaging to it.
And the Republican Party, as long as Rush Limbaugh and Fox News / talk radio lead the party politically, will not change. Today, Limbaugh blasted women voters who gave Obama an 11 point gender gap over Romney for voting essentially with their "vaginas." Bill O'Reilly said the win represents the new reality of America in which, he implied, lazy / mooching / "taking" non-white non-conservatives "want" things from Big Government. 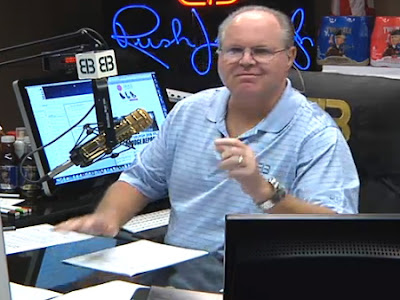 
It wasn't just a presidential victory: Democrats picked up seats in the Senate and retail control of the chamber and a handful of seats in the House, though it remains Republican.

Voters line up to vote in a tent with a nearby electric generator in Midland Beach, Staten Island, Nov. 6, 2012. The power remains out in this part of New York City as a result of Hurricane Sandy now 10 days ago.
#######


In addition, various rightwing measures at the state level failed from removing Democratic judges in Florida to enshrining male-female marriage only in the Minnesota state constitution. On that topic, same-sex marriages were approved by voter referendum in Maryland (Question 6) and Maine, and appears to be on track to win in Washington state. This is historic.

Lisa Amico helps a voter cast his ballot in Staten Island in a tent on Nov. 6, 2012. Again, the power remains out in this part of New York City as a result of Hurricane Sandy.
#######


This election shows that the demographics of America are making the Republican Party in its current hard-right, Southern-fried, fundamentalist white male form is demographically endangered. Even though Romney won the white vote by 20 percentage points, it was not enough to carry him.
NBC estimates the non-Hispanic white electorate shrank by 2 percentage points from 74% in 2008 to 72% while the Hispanic share rose 1 percentage point to 10%. African Americans make up 13%, unchanged, and the rest are other.


Hispanics broke for Obama by 71 to 27 percent. This probably provided the critical difference in Colorado and Florida (assuming it remains in Obama's column with no Rick Scott vote counting shenanigans). 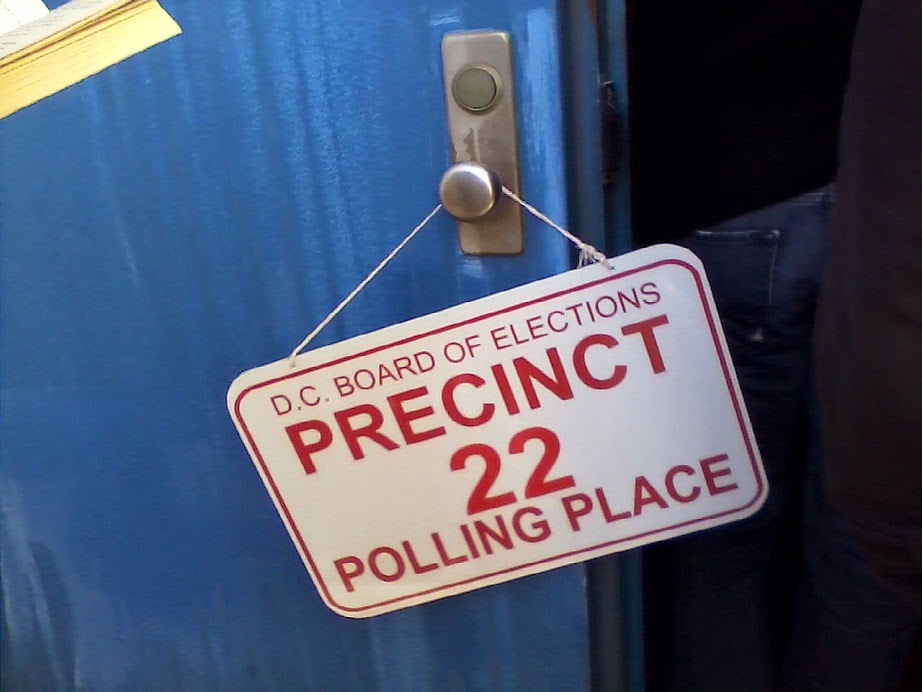 
Oh, and above all else, the wins for Obama and the Democrats represented a TOTAL AND UTTER failure of the tsunami of post-Citizens United "dark money" and super PAC cash and Karl Rove machinations to make ANY blessed difference. The blitzkrieg of horrible network TV political commercial ads 24/7 for months was all for naught. 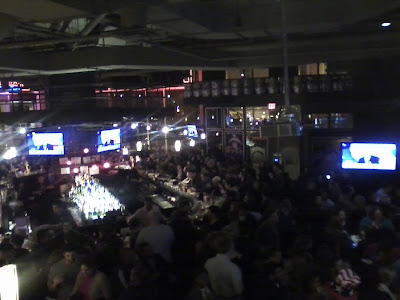 
Of the AT LEAST $1.3 billion or so the Republican side spent by kooky / cranky / fascist billionaires such as the Koch Brothers and Sheldon Anderson, it made no frickin' difference.
Also, every state with a rightwing union-busting governor that won in 2010 -- Virginia, Ohio, Pennsylvania, New Jersey, and Michigan, and probably Florida -- went for Obama.
OK, so here are the numbers ... 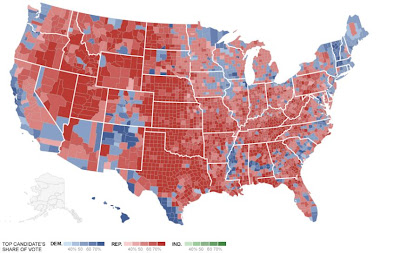 Presidential election 2012 results by county or county-equivalents. Click on map for larger version. 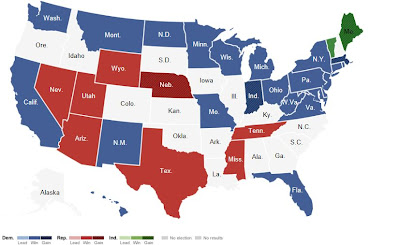 
Dems picked up 2 Senate seats to 53 plus there is one additional independent (Angus King) who joins Bernie Sanders as the other independent. It is unclear if King will caucus with the Dems the way Sanders does. Republicans have 45 seats. All Democratic incumbents up for reelection won releection as well including Claire MacCaskill (D - MO) and Sherrod Brown (D-OH) despite Karl Rove and the Koch Brothers' best efforts. Furthermore, 25 of 33 Democrats running won -- the most since 1964. Republicans held onto seats in Nevada and Arizona with the narrow elections of Dean Heller and Jeff, Flake, respectively, to replace the Republicans who vacated their seats.
MacCaskill defeated Republican Todd "Legitimate Rape" Akin. Meanwhile, in Indiana in a contest for Richard Lugar's old seat, Democrat Joe Donnally defeated Richard "God intended pregnancies from rape" Mourdock. Akin lost by 6 points and Mourdock by a whopping 16 points, in part because of their dreadful statements about rape and pregnancy. Elizabeth Warren handily defeated Republican Senator Scott Brown in Massachusetts (53.7% to 46.3%).
In Wisconsin, openly gay Democratic Rep. Tammy Baldwin won in her Senate bid and in Hawaii over former Wisconsin Gov. Tommy Thompson and HHS Secretary. And in Hawaii, Rep. Mazie Hirono defeated former Gov. Linda Lingle to become Hawaii's junior and first ever female Senator. 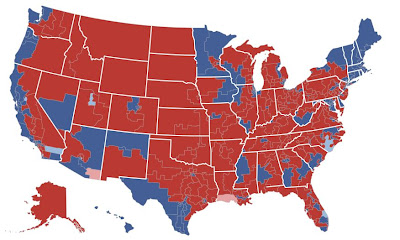 House of Representatives 2012 election results so far. Click on map for larger version.
Republicans held the House though they lost some seats -- as of now, they lost 3 seats with 9 yet undecided. The current split is 233 to 193 with 9 undecided. The GOP holds 242 seats in the current Congress as a result of the 2010 GOP blowout.
The loathsome Joe Walsh and the crazy Allen West both lost. Michele "Bat Shit Crazy" Bachmann hung onto to her seat by just a 1.2% margin in her district (179,189 to 174,891) and even though Romney won it with 56% of the vote.
Updated 8:15PM 11/9/2012 to note this item:


It should also be pointed out that the actual number of votes nationwide for Democrats appears to have exceeded the numebr of votes for Republicans in the House of Representative by at least a half million: 53.92 million to 53.40 million. The reason the GOP held onto Congress is in part due to gerrymandered redistricting.
UPDATED 7:58PM 11/7/2014: The actual official House vote differential was closer to 1.6 million: 59,214,910 Democratic votes to 57,622,827 Republican votes; source here (go to page 73 of the document or page 75 in your PDF reader). End of update.
A few other items of interest to me ... 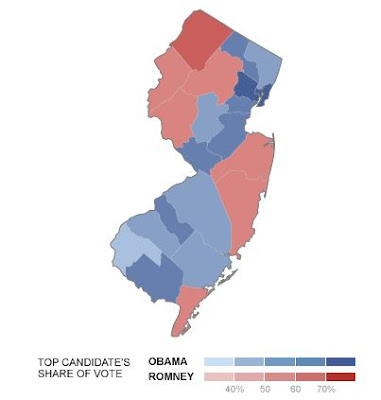 As in 2008, Monmouth and Ocean Counties, New Jersey went for the Republican presidential candidate but this time, Staten Island (Richmond County) went Democratic (it went for McCain in 2008). New Jersey and New York overall went clearly for Obama over Romney (58.0% to 41.0% and 62.7% to 35.9%, respectively). Monmouth County (location of my hometown of Long Branch), New Jersey was split 52.2% for Romney to 46.7% to Obama. 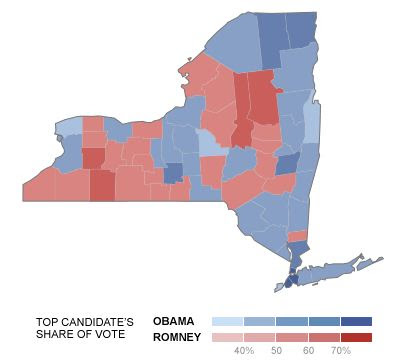 It is not clear how many people in the New York Metropolitan area simply were unable to vote -- especially in northeastern New Jersey and on Long Island -- because of the ongoing disruptions including power outages due to Hurricane Sandy.
Meanwhile, as ever, Anne Arundel County, Maryland went Republican, but the margin was surprisingly close: 49.4% to 48.5% with 2.1% other. 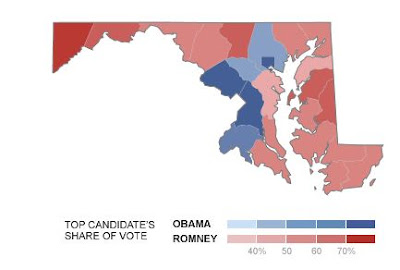 Maryland overall went decisively for Obama thanks to Prince George's, Montgomery, Howard, and Baltimore Counties and Baltimore City. Maryland's tally was 61.7% to 36.6%. 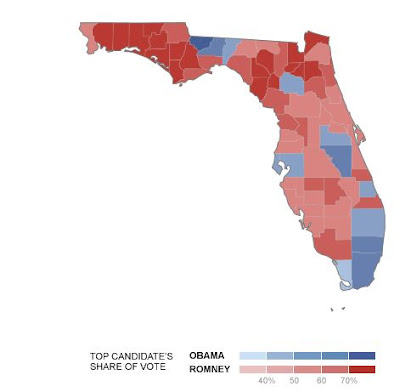 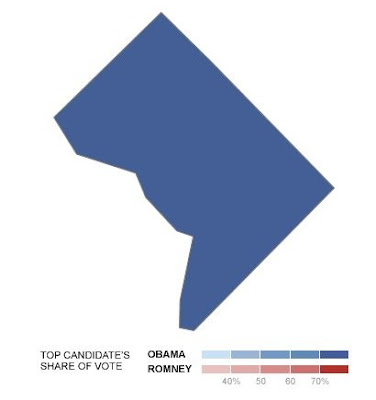 The Obama victory margin was down 1.1% from the 92.5% in 2008, but I think when that cartogram map of the U.S. is made at the county (or county-equivalent) level, it will still show D.C. as the largest bluest jurisdiction. 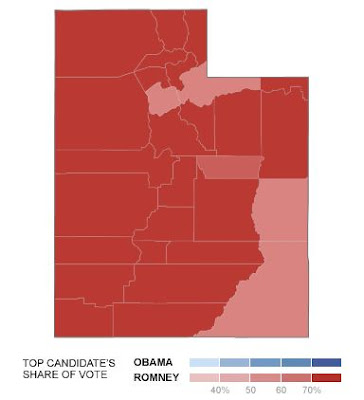 This time, no counties in West Virginia, Oklahoma, or Utah went Democratic. In 2008, only Oklahoma had no counties. Indeed, in 2008 Salt Lake County (location of Salt Lake City) actually went for Obama.
And it appears that four states had no counties that went Republican -- Vermont, Rhode Island, Massachusetts, and Hawaii. In 2008, Obama had six such states (the same four plus New Hampshire and Connecticut). 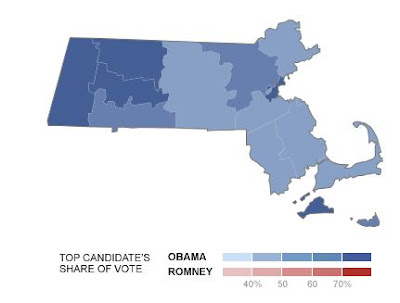 Also, this means Romney didn't win a single county in his home state of Massachusetts. This is a stunning rebuke and I heard on MSNBC tonight that you have to go back to the election of 1856 when James Buchanan won in a three way race with Millard Fillmore and John C. Frémont. Apparently, Frémont failed to carry a single county in his homestate of California.
Oh, and by the way, Nate Silver was SPOT ON in his FiveThirtyEight modeling and analysis. Nate became the object of much rightwing media and even mainstream political punditry scorn, contempt, and even hatred.
As for all the conservative pundits and columnists, they were just wrong, wrong, wrong. Here is a very funny recap by Andrew O'Hehir of how the Fox News Channel folks behaved, most notably Karl Rove. I love his comments about Charles Krauthammer and Peggy Noonan. 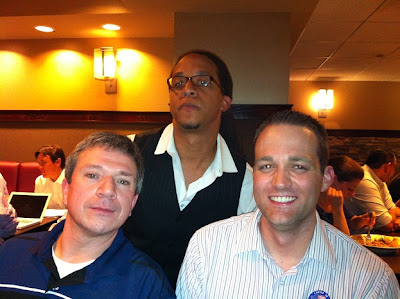 
As noted, I voted on Tuesday morning. I had to wait about an hour in line and the whole affair at Garnet-Patterson High Middle School was a bit chaotic with multiple lines snaking around, confusion as to where to go, and only one electronic ballot working. As it is, I used a paper ballot, which I prefer. 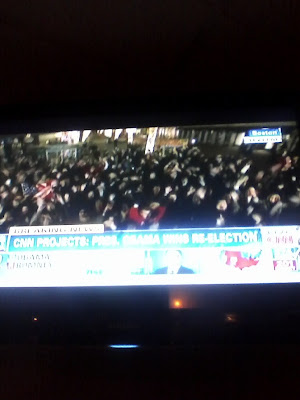 As for last night, I was at Larry's Lounge when the Obama reelection results were announced at 11:18PM on CNN, which I think had the best graphics.

Here is a blurry picture I took showing the TV screen when CNN made the announcement that Barack Obama had won reelection.*


*Yes, I know its a really blurry picture but it's all I've got.
Earlier in the night, as noted above, I was at Capitol City Brewing Company in downtown D.C.
OK, that's all for now. I intend to post my final batch of Hurricane Sandy damage and destruction pictures over the weekend. I also intend before that to post a Friday night musical interlude entry.
#######


Of note, there was a nor'easter with heavy snow and mixed rain and snow in the New York City area and in New Jersey night. This is the last thing that region needs. The D.C. area just was grazed with a bit of rain and sleet. 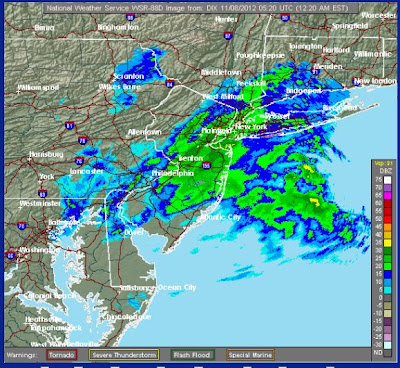 OK, that's all for now. Again, my planned updates will be Friday night and over the weekend.
--Regulus
Posted by Regulus at 1:45 AM