To Hit the Panic Button or Not: Will Hybrid Hurricane / Nor'easter Strike U.S. East Coast? 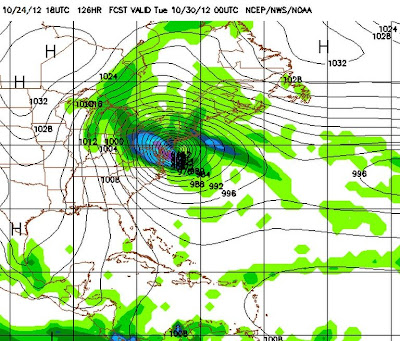 Here is the Geophysical Fluid Dynamics Hurricane Model (GHM) run at 18UTC (2PM EDT) today (Oct. 24, 2012) valid at hour 126 (00UTC 30 Oct. 2012 or 8PM EDT 29 Oct. 2012) showing surface pressure and precipitation. This is the full domain version.
CORRECTED: I had to correct the time stamp title and file names for the four entry images from the 18UTC Oct. 24th GHM and HWRF runs (two from each) because they were incorrectly showing Oct. 25th in the title. They are all corrected now.
This shows Hurricane Sandy striking the mid-Atlantic region as a powerful hurricane, or rather, given its interaction with a strong frontal boundary, a hybrid subtropical storm of hurricane strength / nor'easter. The issue has to do with storm's temperature and air pressure structure -- barotropic, baroclinic, or a hybrid.
Just how powerful? 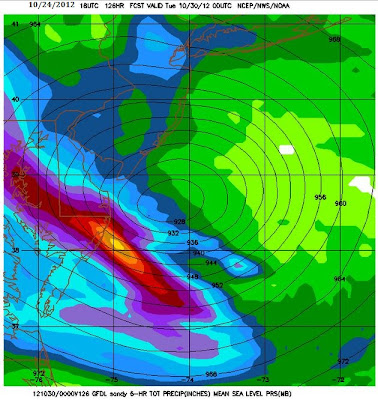 Well, if we look at the above picture showing the nested grid version (i.e., the version that follows the storm itself) of this GHM run at the same hour 126 time step, we see a 928mb bomb* about to plow into the Jersey shore -- and about to wreak some serious havoc on New York City (as in flooding much of the city's low-lying areas including JFK Airport), and easily bringing gale force winds and torrential rains to the D.C. area.
*That's 27.40" -- which is as deep as a typical category 4 hurricane.

So is it time to hit the panic button?
If I were a city official responsible for disaster preparations, I might have a different take on this. Likewise if I were a hysterical media type, who thrives on ginning up hype at all times, embodied most ghastly in the Weather Channel's bald little troll and Crocodile Dundee wanabee Jim Cantore.
But as a would-be meteorologist, I would say NO. 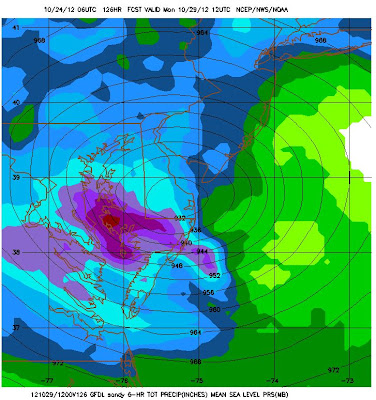 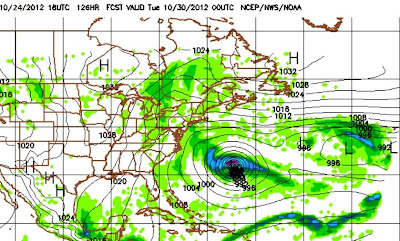 This shows Hurricane Sandy making a right-turn beeline out over the Atlantic after passing the Bahamas. The difference has to do with the interaction of the cold front / trough moving off eastern North America and the extent of how negatively tilted that trough becomes.
Supporting this solution, the GFS operational model that came out earlier today* at 12UTC shows Hurricane Sandy staying well offshore.

*I posted this entry after midnight but "today" in this entry means October 24th. 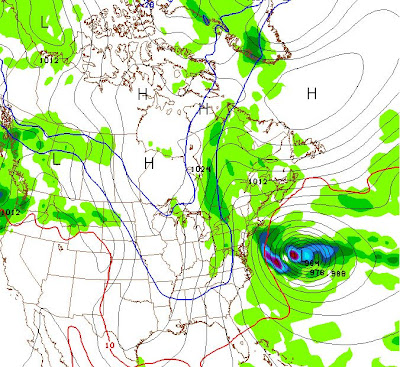 
The GFS ensembles are also all over the place. As for the NAM, it does not go out far enough to capture the storm at this hour.
So is it all clear for the East Coast? Not quite. For starters, the highly accurate European model (the ECMWF) has been showing an East Coast strike in two of its most recent runs. 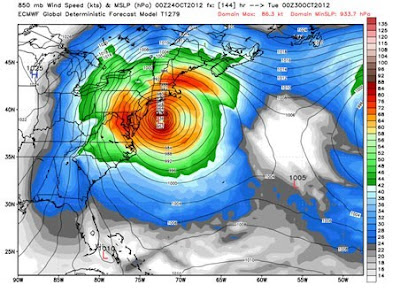 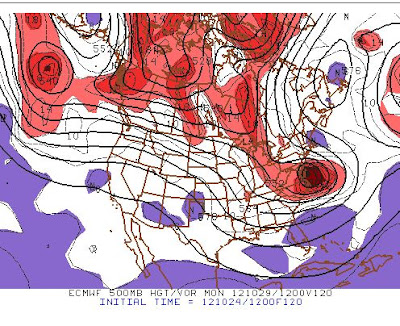 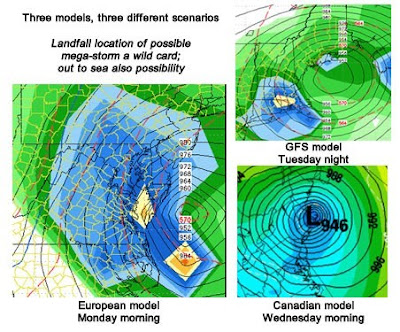 ... and here is a comparison of the ECMWF, GFS, and Canadian models of Hurricane Sandy issued at various points today. All show some sort of U.S. East Coast strike between the Delmarva and Maine. This image too came from an entry on the Capital Weather Gang site earlier today.
#######


In the case of the 12UTC GFS from today, what happens is that the hurricane -- transitioning to a powerful nor'easter akin to the October 1991 "Perfect Storm" -- pivots / dumb-bells back to the southwest into New England, powerfully "reloading" the trough. 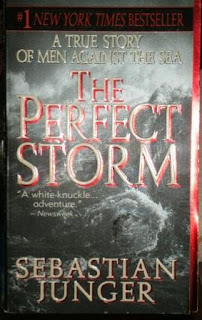 I could say much about that "Perfect Storm" event, but it would be too much of a detour right now. I'll keep it short and just say that it involved a complex nor'easter and a tropical storm "within" it. I will also say that I loathe Mark Wahlberg. '

Oh, yes, and Sebastian Junger was somewhat angry at me for what I wrote in a press release in June 2000 when I worked for APS and co-wrote with AIP. 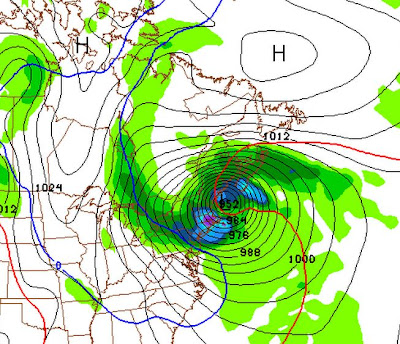 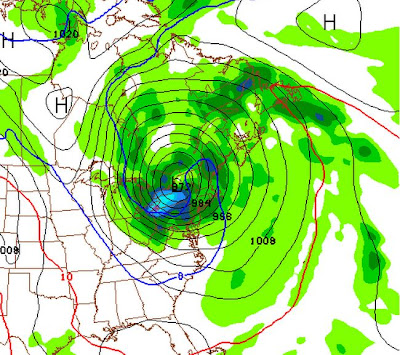 And here is the same model run 24 hours later, valid at hour 180 / 00UTC 01 Nov. 2012 -- showing the storm centered over upstate New York, having filled to 972mb and probably nearly fully occluded.
There is a fairly expansive precipitation field and the 0C isotherm has plunged way south of D.C., although at this time of year, the boundary layer would almost certainly support only rain below about 2,500 feet.
#######


Anyway, as you can see, there are so many models and innumerable permutations / iterations of them to use. And this weather event is still at least 4 days away -- so there are so many opportunities for things to change. As it is, I think the media panic button is about to be hit.
This is the meteorological equivalent -- actually, it came first -- of what Nate Silver is doing with the presidential polls and where things stand.
Oh, yeah, it reached 84F at KDCA today, tying the daily record high there set in 2001.
That's all for now. My next planned update may not be until Friday. 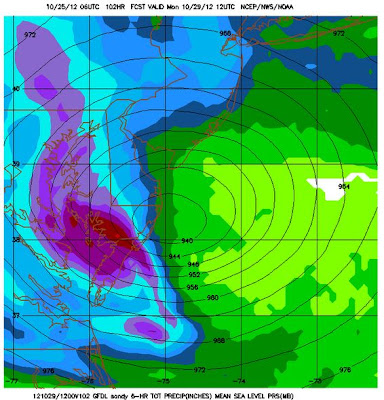 Here is the nested grid GHM run at 06UTC (2AM EDT) 25 Oct. 2012 valid at hour 102 / 12UTC 28 Oct. 2012. This shows a 940mb low / category 4 equivalent hurricane strike at Ocean City, Md. -- and chugging toward the northwest. Indeed, in the next image, the center is right over Baltimore City.
Oh, and the 00UTC Oct. 25th ECMWF runs shows the same general idea with the storm hitting the Jersey shore. I would have posted this but making all these corrections caused me to run out of time this morning.
#######