Still Falling Back -OR- October, Surprise 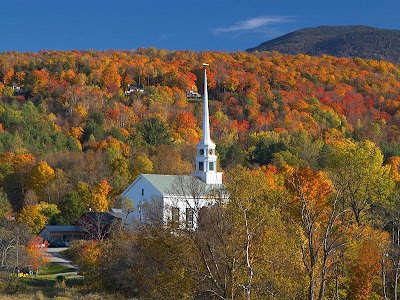 Autumn splendor in Stowe, Vermont in a photo I found online.
#######


First thing's first -- and above all else, this is to Chester -- I WILL be posting my "Baltimore City limits corner and inflection points" tour pictures from this past Saturday in a full blog entry. However, owing to my limited blogging schedule and the length of time it takes to post an entry of that size and detail, it will be in all likelihood over the weekend (probably this coming Saturday).
And that's (to quote blogger Bartcop) a Nancy Grace Guarantee. 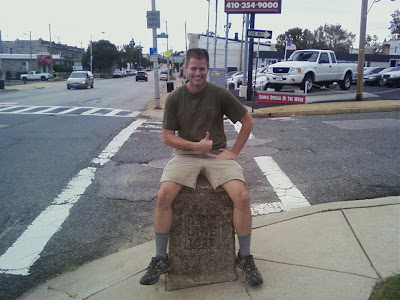 Chester at one of the three full intact boundary markers of Baltimore City, this one located at the city line where Hanover and Potee Streets (heading south) becomes Rt. 2 - Gov. Ritchie Highway, 2:48PM, Oct. 6, 2012.
####### 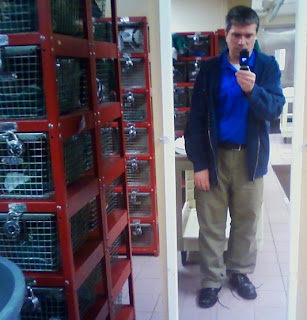 Secondly, I had a good gym workout at the YMCA last night solo (when the picture was taken) and tonight with my personal trainer. Sessions are on Mondays and Thursdays for 6 weeks but T. was unable to make it last night so we met tonight.


It is a good mix all around including cardio (treadmill jogging), weight-lifting on the machines, and the sesssions with the personal trainer including assorted exercises (burpees and mountain climbing anyone?), dynamic cardio, and those abdomen ones that cause me more than a little pain.
I then again went swimming for about 20 - 30 minutes,  part actual swimming and part just frolicking in the water. The pool is sufficiently not crowded around 930PM to 10PM to be able to do that. 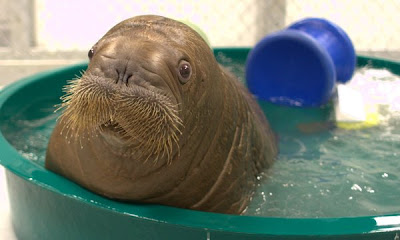 Here is a picture of me in the pool.
Actually, this is "Mitik" the plucky young walrus who was rescued as a sick orphaned pup the waters off Seward before being sent to the nearby Alaska SeaLife Center. He is soon to be transported to the New York Aquarium near Coney Island. Full story here.
#######

Of note, my weight is now a tad over 166 pounds -- or down 17 from when I started and 19 pounds from that awful June work event just before I rejoined the gym. But I've also reapportioned some weight -- fat to muscle -- so it has certainly been at least a 20 pound overall change.
I'm taking tomorrow night off and plan just to go to one of my usual bars (Larry's Lounge) and meet up with Gary and Kristof. 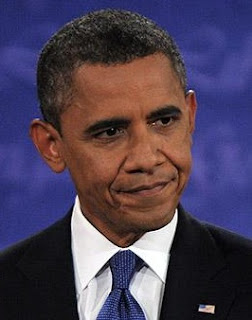 Right now, I'm home posting this entry and cooking a steak as I'm rather hungry. You know a steak -- good for protein. As I read somewhere, maybe President Useless S. Obama should have had a decent steak dinner before his pathetic and inexcusable debate performance last Wednesday night.


That would have been better than what he probably actually had, namely, a cigarette and a tranquilizer, his possible low blood sugar introducing a weird diffidence into that often insufferable attitude that is at once arrogant yet incapable of taking (so to speak) an out-and-proud progressive stand on anything -- all at 5,280 feet elevation there in Denver.
I'm still just so frickin' angry at him for that failure even to try. I agree with the view that deep down he's indifferent about the election -- if he lost, would eagerly embrace his next adventure: the Barack Obama Presidential Library to be located both in Honolulu and Chicago. 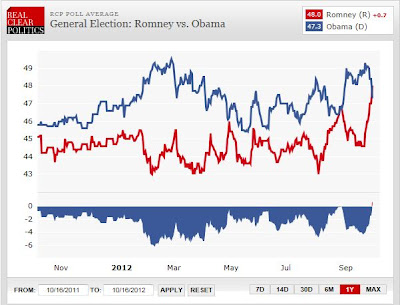 The RCP polling trend updated October 9, 2012
He remains in a steep fall, although it is probably leveling off by this point. And the he doesn't even care.
#######
OK, that's all for now. Oh, yes, the weather has been very lovely the past few days -- overcast, cool, with spotty drizzle and rainshowers (though we need more rain), and highs today only in the 60s (64F at KDCA, 61F at KBWI, and 62F at KIAD). And fall colors are beginning to emerge in the foliage. 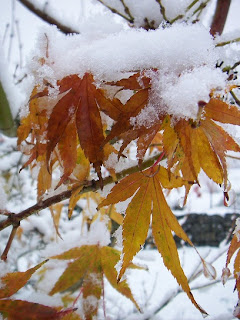 Let's hope we get an actual winter this year. Stupid local media yammering for endless warmth and sunshine aside -- where's the Palka-cabra creature?? -- it turns out that we actually need winter to keep the natural world (the biosphere) around here in  balance. And for anyone who fails to grasp what that means, well, that's their dumb problem.


OK, that really is all for now. Again, I plan to have the Baltimore city limits corner and inflection points tour entry posted on Saturday. I may have an interim update before then -- at least a Friday night musical interlude one.
--Regulus