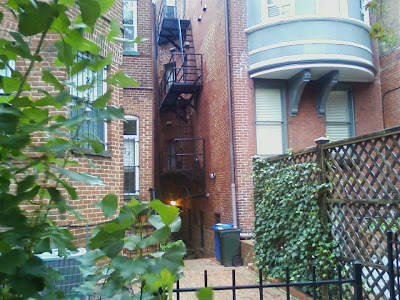 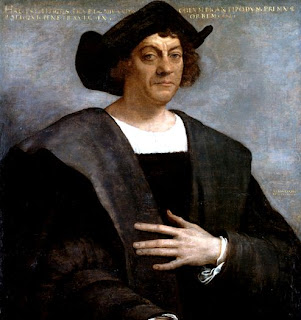 Just a quick posting this Columbus Day -- or on any U.S. liberal arts college campus with its throwaway PC social liberalism while scamming billions of young people into being hundreds of thousands of dollars in debt for a glorified extended high school education and YES, I'm talking to you, frickin' University of Maryland, College Park -- Indigneous Peoples' Who Were Victims of Slavery and/or Genocide Day.


So if a new Pew Research Center poll is to be believed, President Useless S. Obama is in total freefall and collapse (I actually don't think that's the case, though he is certainly down about 3 to 5 points). The poll was conducted entirely after Obama's catastrophic debate performance where burbled into the lectern while a corporate sociopath lied and leered at him, steam-rolling over Jim "We'll Have Full Coverage" Lehrer (R - 98 years old). 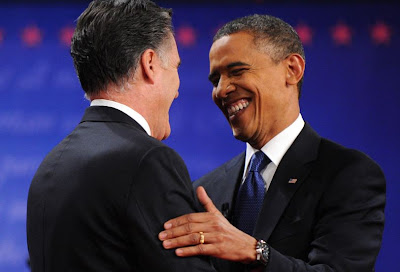 "Hi Mitt. The truth is, I can't wait to lose the election, and I'll be voting for you!"
The Pew poll shows Obama trailing by 4 points, 49 to 45 percent to Willards Mittens Romney and his offshore tax havens and Bain Capital morality, among "likely voters." God Bless America. Pew had shown Obama up by 8 points over Romney in the previous poll in mid-September. Furthermore, Pew polls tend to skew Democratic. 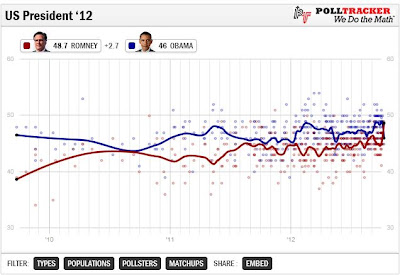 As a result, the TPM poll tracker now has Romney up by 2.7% in a 48.7% to 46.0% split (see above image). Obama himself is probably secretly thrilled about this since he clearly does not want to win. 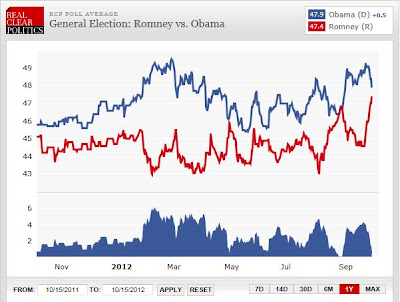 The RealClearPolitics average still has Obama ahead even with the new Pew poll factored in at 47.9% to 47.4% but -- as the above image shows -- the reversal in the past week has been tremendous. Its Electoral College map is still unchanged.
I'm actually surprised that one debate performance, even a disastrous one, could move the country that much, but there you have it. And, again, Obama probably secretly very pleased with himself. 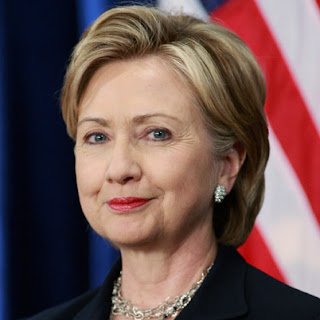 For so many reasons, this is why I wanted Hillary. We wouldn't be having this situation. She would be ahead 20 points.

As I see it, the only consolation, if that's what it is, is that Romney will have to deal with the toxic political atmosphere of D.C. and in all likelihood within 6 to 12 months will be a strongly disliked and ineffectual president.

Romney will also set the stage for an easy Hillary win in 2016. At least that's what I'm telling myself. But America is such a shockingly stupid country, that who really knows. Having said all this, I'm also fairly sure that Obama will have more up upsurge in the next 2 to 3 weeks, but all that means is a torturously long election night. And even if he does win, at best it will feel mediocre.


Updated 11:25PM 10/08/2012: Nate Silver as yet doesn't see all of this as an Obama free fall but rather the kind of poll volatility that is similar to what happened in the lead up to previous elections, in particular with an economy that is weak but still modestly favors the incumbent. 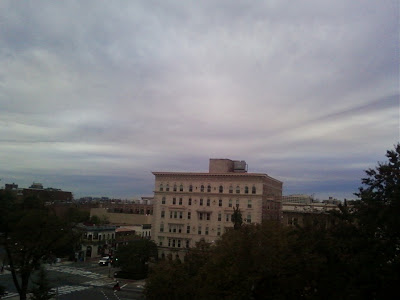 
Today, I purchased a new belt and a new pair of shoes at the Metro Center Macy's. I also have to go to the gym shortly. I have one of my twice-weekly sessions with my personal trainer tonight, but I also need to have a jog on the treadmill and do a bit of weight-lifting on my own.
####### 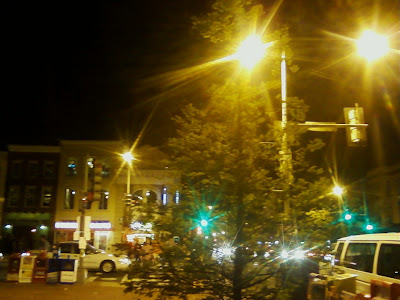 Late night at the intersection of U and 14th Streets NW, Washington, D.C., 2:49AM, Oct. 7, 2012. I was walking back from Nellie's.
This is in front of the Frank Reeves Center and a young bald cypress tree that was planted earlier this year. I thought the tree had died during one of our ferocious heat waves this past summer -- the needles all died -- but it came back strongly.
#######


OK, that's all for now. My next planned update will be in a few days with my Baltimore City boundary inflection points tour.
--Regulus