Well, I think we are just about to hit the panic button for the hybrid hurricane / nor'easter, a.k.a., the "Frankenstein storm" -- or whatever this event will be dubbed by the media and in the popular culture phraseology.


The models are converging on a solution in which Hurricane Sandy -- which already struck Jamaica and Cuba with fatalities, flooding, and damaging winds -- moves up the East Coast to a position near the Outer Banks or lower Delmarva whereupn it begins to interact with a powerful cold front / deepening upper level trough that goes negative tilt even while the storm's forward motion is blocked by a high near Newfoundland. 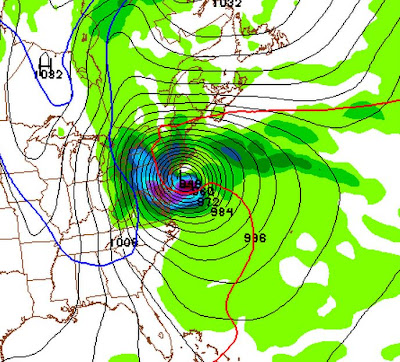 The operational GFS 18UTC Oct. 25, 2012 run valid at hour 111 / 09 UTC Oct. 30, 2012 showing mean sea level pressure (MSLP), 850mb temperatures, and 6-hour precipitation.
The 0C isotherm is plunging to the southeast even as the low maintains a warmer core and the pressure field indicates a huge area of gale to storm force winds over the Northeast cities.
#######


In short, the main weather and hurricane forecast models show that the storm -- progged to be a category 1 at 80mph -- transitions from a warm-core tropical cyclone into a much more expansive and impactful (yes, impactful) subtropical / hybrid system that eventually becomes a cold-core extratropical cyclone. 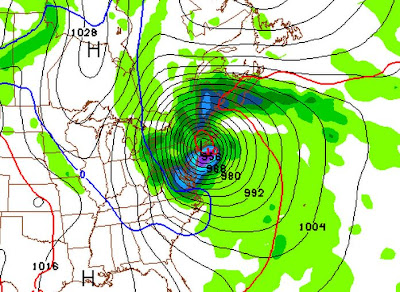 Here is the GFS 00UTC Oct. 26, 2012 run showing the same variables valid at hour 117 / 21 UTC Oct. 30, 2012.
This run show the hybrid hurricane / nor'easter staying offshore longer and then hooking more of a 90-degree left turn into the coastline.
Note that I use the same set of model output variables in thise images including mean sea level pressure, 850mb temperatures, and multiple-hour precipitation interval (6 hour on the GFS). There are many other variables but I find this set useful. 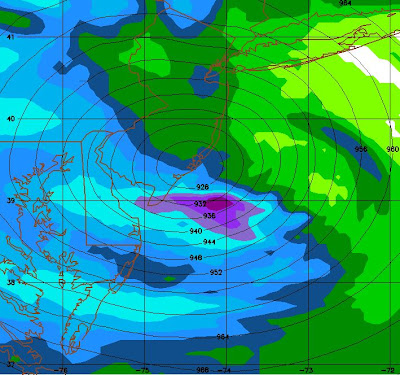 
The center of the low itself hooks to the northwest -- or even west -- back into the coastline somewhere between the lower Delmarva and Boston, and more specifically, between about Assateague Island, Virginia and Sandy Hook, New Jersey. 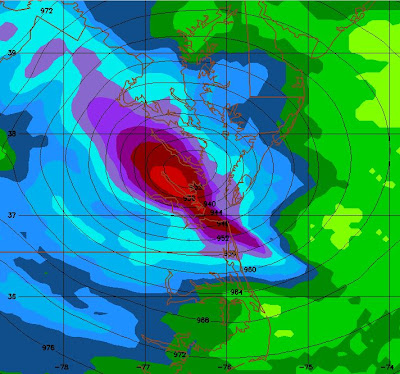 The GHM nested model's 18UTC Oct. 25, 2012 run showing the hurricane making landfall over the lower Delmarva and chugging toward the D.C. area, or rather just south of it.
####### 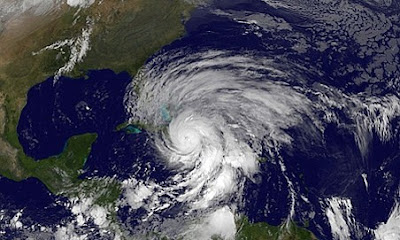 
When I said the models, I referred to the ECMWF ("European" in media parlance), GFS, and increasingly the NAM (though it doesn't quite go out far enough yet in its time domain). The ECMWF and the GHM have consistently shown in multiple runs a strike on the mid-Atlantic region. 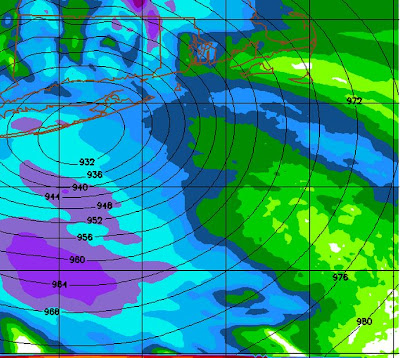 The HWRF model, which had consistently taken the storm out into the Atlantic, in its 18UTC run this Thursday, hooks the storm almost 90 degrees westward into New York City. The above image shows the HWRF nested model's 18UTC valid at hour 120 / 18UTC Oct. 30, 2012.
How odd it would be if Hurricane Sandy came ashore over Sandy Hook, New Jersey (so near Sea Bright and Long Branch). This would also be a true disaster scenario for the low-lying parts of New York City and Long Island.

The NHC has bought into this view today (Thursday) and it is reflected in its current forecast track issued at 11PM EDT tonight (see above).
#######


OK, that's enough weather-talk for now. There will be more opportunities to discuss what may or may not happen. The Capital Weather Gang folks had a blog posting on Thursday discussing four different weather scenarios for the D.C. area.
As for me, things are meh. I had a good gym workout with my personal trainer at the YMCA tonight and I then went swimming. I also went to the gym last night. However, I'm worried about something at work based on a teleconference in which I participated on Thursday with local, state, and Federal officials (in the agency for which I work as a contractor). I came across looking kinda lame and maybe was possibly thrown under the bus. I'm unsure. 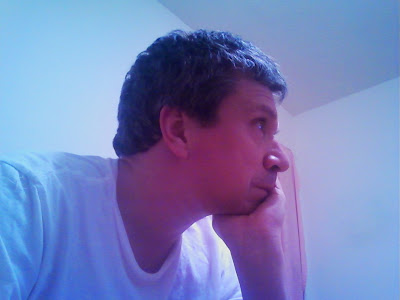 
OK, that's all for now. I'm quite tired. I'm watching a station I didn't know I got until a few days ago -- WETA UK, which airs numerous Britcom reruns. There is an episode of Are You Being Served? on at the 1230AM hour.
Anyway, I plan to have a Friday night musical interlude blog update.
--Regulus
Posted by Regulus at 1:19 AM