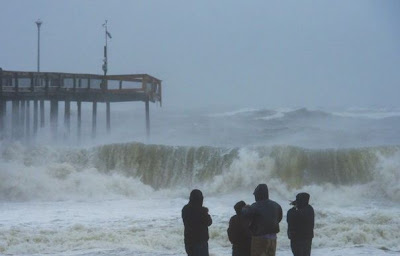 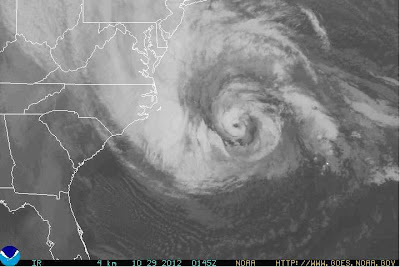 ... She's got an eye again. This is the infrared satellite picture at 0145UTC (9:45PM EDT) Oct. 29 (28th), 2012.
And the shortwave trough seems to be elongating / rounding through Tennessee  and into Georgia tonight. The trough should be going negative tilt soon with hurricane capture -- and thus the subsequent recurvature of the cyclone back into the coastline isn't far off. The exact location of this is still unclear.
#######


So everything is still on track for the arrival of Hurricane Sandy in all its hybrid tropical / extra-tropical ferocity. The storm itself as of 8PM EDT tonight has as central pressure of 950mb and top sustained winds of 75mph. The sprawling storm is centered at 34.0N and 70.9W or 485 miles SSE of New York City.  The forward motion is still NE at 15mph but that is expected to change -- and to the WNW into the mid-Atlantic coastline (specifically, the Jersey shore) by tomorrow. 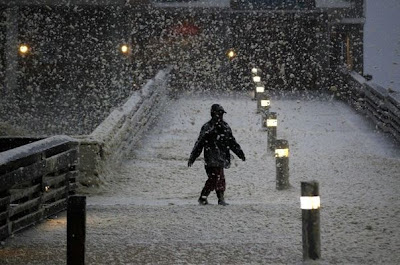 A blizzard of sea foam is lifted up from the heaving ocean by the Hurricane Sandy's strong winds and spewed onto Jennette's Pier, Nags Head, N.C., Oct. 28, 2012. That foam can be pretty nasty.
#######


At this point, it looks as though New York City and the Jersey shore are going to get the worst of it. A storm surge of 6 to 11 feet is expected with onshore hurricane winds. There is a chance the storm will have one of the lowest pressures for an East Coast landfalling hurricane.
Although the Washington and Baltimore areas are not in the forecated crosshairs, there will still be tropical storm conditions for 12 hours or so even in the D.C. area owing to the size and structure of the storm. This includes 35 to 50mph winds with gusts over 60mph and 6"+ of rainfall.


Everything is shutting down up and down the I-95 corridor between Washington, D.C., and Boston. New York City is shutting down its transit service including the subways and residents in "Zone A" are being told to evacuate. Zone A, based on this map that I found on this website, seems to correspond to the areas that are expected to flood in a category 1 and 2 hurricane direct strike on New York City as shown in the SLOSH model. 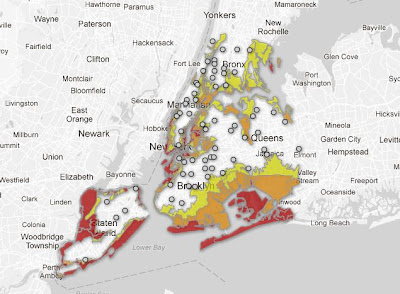 The map showing New York City's Evacuation Zones A, B, and C. 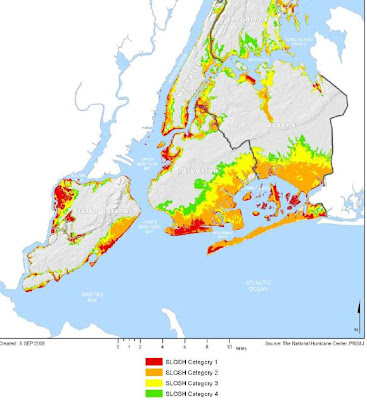 
Here in D.C., the Federal Government is shut tomorrow -- and I expect this means I also have the day off (as a contractor).
It is a gloomy showery night here in D.C. The rain has tentatively started. There has been a heavy rain band along the length of the Eastern Shore / just east of the Chesapeake Bay all day in some sort of convergence zone.  Of note, in keeping with the very unusual and possibly historic nature of this storm, there is already heavy wet snow falling at the highest elevations of southwestern Virginia in Wise County. 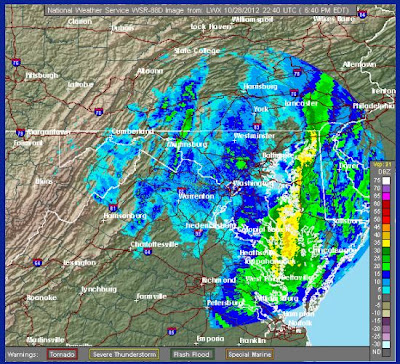 
The hurricane itself has not yet started its expected sharp turn to the west northwest back into the coastline as a result of the deepening / negative tilt trough moving in from the Ohio River valley. 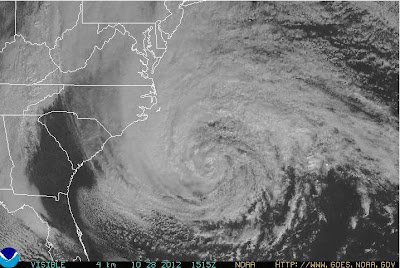 
All kinds of watches and warnings are in effect up and down the East Coast of the United States. Speaking of which, here is something you may not ever see again in your lifetime -- or at least not for a a few decades -- concerning the weather advisories in the Baltimore/Washington NWS forecast area (the Sterling LWX county warning area): hurricane-related warnings AND blizzard warnings in relatively close proximity. 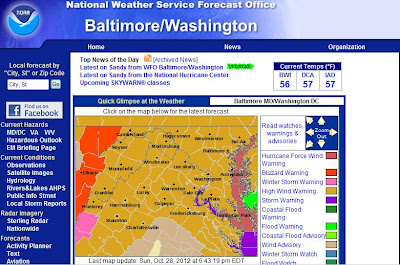 Here we have (as of 6:43PM EDT tonight) both a hurricane force wind warning AND a blizzard warning on the same map (the latter in Garrett County, Md., and parts of West Virginia). But such is the nature of this hybrid storm -- Hurricane Sandy transitioning into an extra-tropical cyclone.
At this point here in D.C., there is a high wind warning and a coastal flood warning.
Of note, the hurricane force wind warning on the Chesapeake Bay and the storm warning on the tidal Potomac would under a "normal" hurricane situation actually take the form of a hurricane warning and a tropical storm warning, respectively. That is, if there were no transition but instead the storm remained fully warm-core tropical, those would be the corresponding warnings under identical wind / sensible weather conditions. However, because of the expected transition, the National Weather Service, including the National Hurricane Center (NHC) and the regional weather forecast offices, are issuing extra-tropical storm warnings. NHC explains this here. 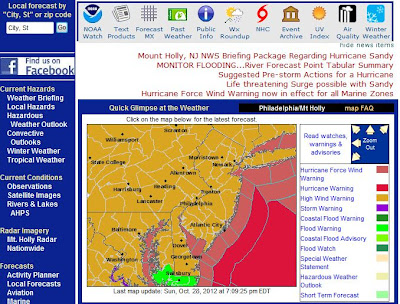 Here are the warnings for the Mount Holly / Philadelphia CWA updated at 709PM EDT tonight. You see the same thing: Hurricane warnings are in effect well offshore on the continental slope waters but hurricane force wind warnings closer in as a result of that expected transition.
I've been watching the Weather Channel quite a bit -- except when frickin' Jim Cantore's mug appears on the camera. He's unwatchable and unlistenable.
####### 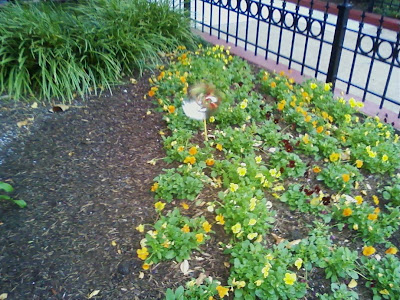 
I've purchased about $100 worth of groceries in the past two days and had no trouble finding anything at either the Harris Teeter or the 17th Street Safeway. I went to the latter tonight after going to the YMCA. 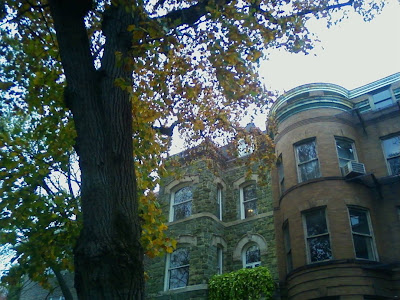 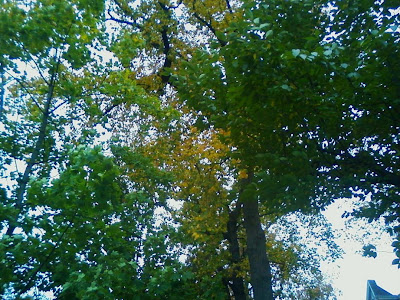 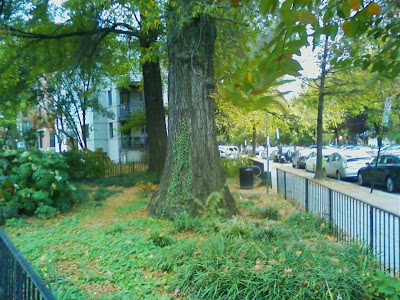 
OK, that's all for now. I plan to update this blog tomorrow with more weather info, but there is a chance that my internet / cable could go out. To my (few) area readers, be safe.
--Regulus
Posted by Regulus at 8:34 PM