Saturday September Squall Line -OR- The Trouble With Transitions ... 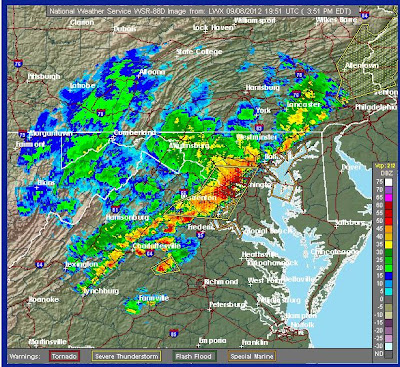 
This is an interim update to note the severe thunderstorms presently (4PM hour) roaring across the Washington / Baltimore area. It is a squall line with powerful winds and drenching rains, along with reports of some tornadoes. The storms are just clearing the immediate D.C. area and moving into the Baltimore area, in particular parts of Anne Arundel County. 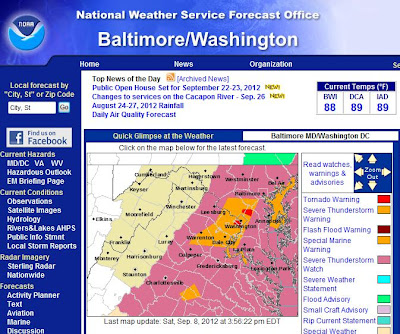 Sterling (LWX) county warning area (CWA) advisories / weather warnings in effect as of 3:56PM EDT, Sept. 8, 2012. The tornado warnings are in red (over parts of Arlington and Prince George's Counties).
#######


My mom lives in a trailer park in Anne Arundel County (in Millersville), and so that's not good.
DO NOT DRIVE TO AND TAKE SHELTER UNDER A HIGHWAY OVERPASS! That's a potentially lethal place to go -- any debris channeled at high velocity with no place for a human to hide (esp. since most overpasses don't have girders). Here is more explanatory information from a 25-slide NWS presentation. Read it.
As it is, any tornadoes in a fast-moving squall line along a cold front such as this are probably mostly EF-0 and EF-1, but still...
####### 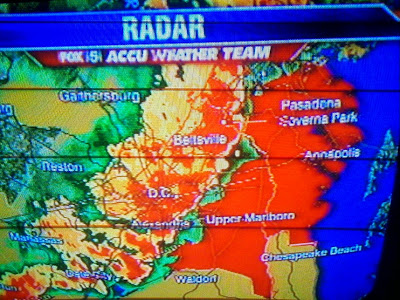 Here was the Fox 5 WTTG radar in a screenshot of my TV that I took at 4:11PM today. The reason all of Prince George's and Anne Arundel Counties are lit up red is because of the NWS tornado warnings. The actual warnings were for a subset of them but I think the way these local TV channel storm warning systems work is to light up the entire county on something like that.
Oh, yes, the Sue Palka-cabra creature called in and was talking to the other on-air TV weather lady. She talked about "the end of the world as we know it" -- just kidding...
####### 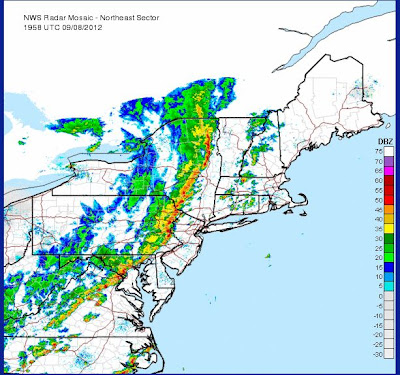 
The storms are along a strong cold front that is crossing the Eastern Seaboard and there are other squalls moving across Pennsylvania and into New York state. This cold front is ushering in what may be a fundamental pattern change. It was in the upper 80s Fahrenheit earlier -- I'm not sure if it reached 90F at KDCA today (it reached 89F yesterday) -- but is now 72F and the week ahead features highs no more than 80F with lows around 60F and much lower humidity.
Updated/Clarification, 7:43PM 9/8/2012: It actually reached a high of 91F at KDCA today, making it the 53rd such 90F+ or higher this year. However, this very well may have been the last such 90F+ day of this year. 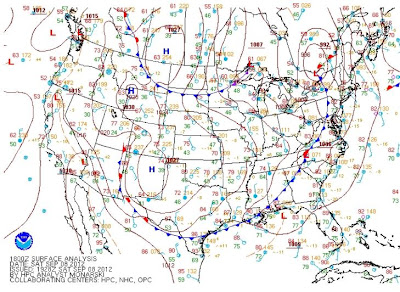 
As usual, the storms have knocked out electricity to many people in the D.C. suburbs owing to downed trees damaging power lines. It appears on the order of tens to maybe a couple hundred thousand customers in Northern Virginia and suburban Maryland and parts of D.C. where the powerlines are above ground. 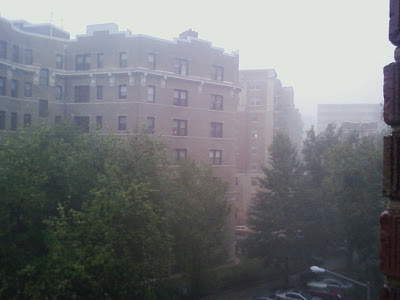 
OK, it's now about 51PM and the storms have mostly cleared the area and my mom and Ray got through OK. Changing subjects, I am in the process of preparing a new post with lots of old scanned photos. I plan to have it posted this evening.
--Regulus
Posted by Regulus at 5:15 PM