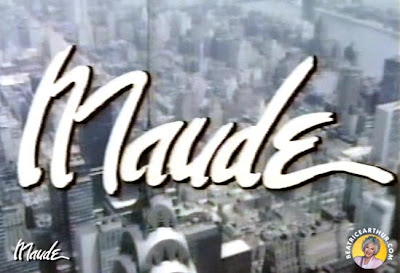 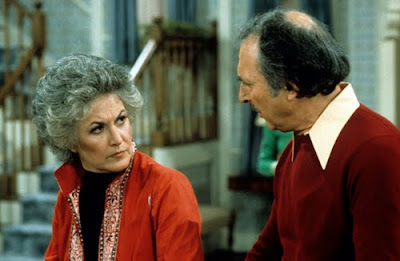 
It turns out that today -- Sept. 12, 2012 -- is the 40th anniversary of the show's debut on Sept. 12, 1972. The show was a spin-off of All in the Family (she was Edith's super liberal cousin), and it ran for 6 seasons / 141 episodes until April 1978. There was a two-part episode "Maude's Dilemma" aired last night -- this is the legendary one in which Maude finds out she is pregnant and opts to have an abortion. This aired in Nov. 1972 -- two months before the Roe. v. Wade decision (it was legal in New York where she was supposed to live at the time).
That episode aside, the show is hysterically funny. Above is the opening sequence (though not a very good quality YouTube version of it). I love the ending line, "that uncompromisin' / enterprisin' / anything but tranquilizin'/ right on Maude!" The song was sung by the late soul singer and musician Donny Hathaway, who died an untimely death in 1979 at the age of 33. His daugher, Lalah Hathaway, is an R&B and jazz singer today.
Here is the episode -- from 1977! -- when Maude goes to a gay bar ("the Gay Caballero").
Part 1
Part 2
Part 3
#######


I went to the gym tonight after work and had a good work including 40 minutes + 5 minute cool down; a half hour on weight-lifting machines; and a 20-minute swim. I then walked home serenely up 17th Street, stopping at the Safeway.
My weight (measured on the big scale) was 170 pounds (actually, 169.5 pounds buck-nekkid, but I wasn't buck-nekkid and instead in bathing trunks and had a towel on the scale itself). I'm now down 13.5 pounds from what I weighed back in late June (that was 183.5 pounds) when I rejoined the gym and 15 pounds from that disastrous "Know Your Numbers" event on or about June 15th at work (and THAT was actually a 3 pound deduction for clothes -- I came in that morning at 188 pounds but the lady marked me as 185 pounds). That's not me. Oh, and my goal is 160 pounds.
My gym visit followed a busy and fairly productive. I've been on the phone or in e-mail exchanges with so many Texas small town administrators and city secretaries, not to regional sales managers in relevant industries.
So that's about all I have to say for now. I'm still planning to post that second batch of Wildwood, New Jersey pictures but it may not be for a week or so.
--Regulus