A Virginia Great Meadow and a Manitoba Boundary Monument 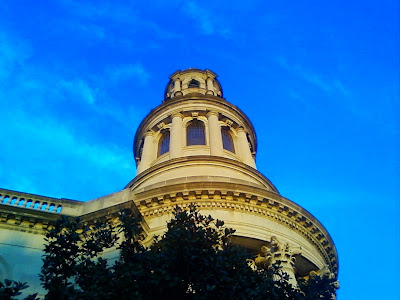 National Baptist Memorial Church at Columbia Road and 16th Street NW, Washington, D.C., 6:59PM, Sept. 14, 2012. The top looks a lot nicer than the base -- which is in a neighborhood that kind of resembles San Salvadore and is surrounded by a truly ghastly white iron fence to keep out the homeless.
I was walking back from the Columbia Heights Target and Payless Shoes where I bought a new lamp and shade and a new pair of sneakers (for the gym), respectively, after work.
#######


Well, I was going to post an update tonight but it just didn't happen. I'm exhausted tired, and I may not go out at all tonight (almost unheard of for me as it is a Friday night and that's pretty much what I do with my life). 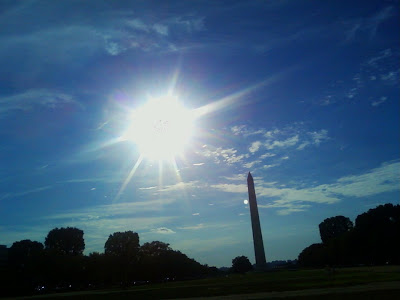 Dazzling sunlight and a silhouetted Washington Monument, as I saw while crossing the National Mall after leaving work, 5:20PM, Sept. 14, 2012.
#######


As it is, I'm supposed to go to a Virginia wine festival tomorrow on what amounts to a party bus version. I'm only going because my friend A. (also my supervisor at work) and some of her group are going. This is relevant to tonight because I need to be in Clarendon / Arlington no later than 945AM to get the 10AM bus. It's some where waaaaay out in Virginia -- at Great Meadow in The Plains. 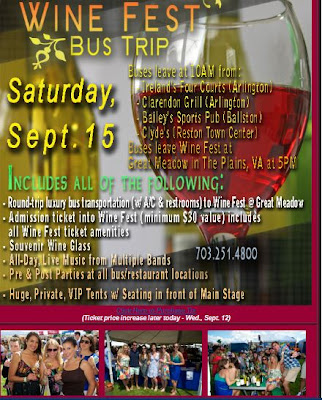 Dozens of buses are ferrying hundreds of 20-something year olds (and this 42 year old) from various locations in the Northern Virginia suburbs. I only opted to go because I thought it was an actual tour of a winery, not an all-day party event. I'm almost tempted not to go but that would disappoint A.
But the more I look at the event, the less I want to go. 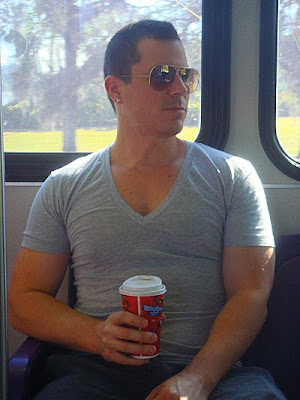 
I did not go to the gym tonight, which is fine, I suppose, since I've been going a lot lately including yesterday. I won't go again until Sunday, at least that's the plan. 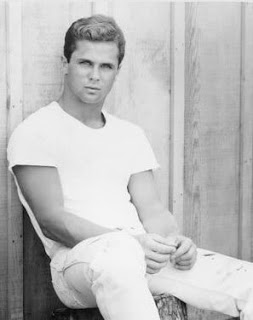 I'm watching all those old sitcoms on Antenna TV tonight -- including right now Leave it to Beaver. Tony Dow was rather attractive. And what a strange world is showed.

I think this is an actual picture of him but I could only find one version of it.


Well, that's about all for now. I was going to post some links to Paul Krugman's blog and his Friday New York Times op-ed with associated commentary, but I guess I'll just post the links.
I do want to post this wonderful quote from his blog entry "The Emerald City Gang" earlier today, since it applies so well to so many, including Wall-P: 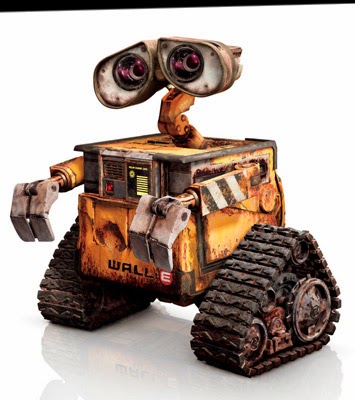 "I understand, in a way, why these people are still at it; research shows that the truly incompetent often have high self-confidence, because they're too incompetent to realize that they're incompetent ..."
And here is a good quote from one of the highly recommended comments to the same Krugman blog entry, which actually discussed Dan Senor's role in "advising" Mitt Romney on foreign policy (in the wake of Romney's vile and politically self-destructive remarks about President Obama and the attacks on the U.S consulate in Benghazi that killed U.S. Ambassador to Libya J. Christopher Stevens):
"Here we go again with more Bush Jr. delinquents in the Romney cavalcade."
####### 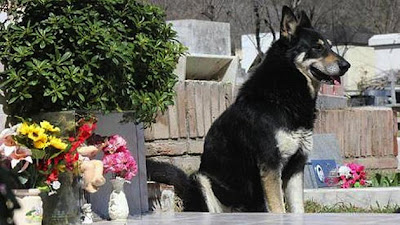 Capitan the dog watchs over his late master's grave.
Also, I would like to post a link to this story about a German Shepherd dog (pictured above) that has stood vigil over his late master's grave in the town of Villa Carlos Paz, Argentina for six years -- after running away from home shortly after the man died and somehow finding the cemetery. Here is another story about the dog, Capitan.
####### 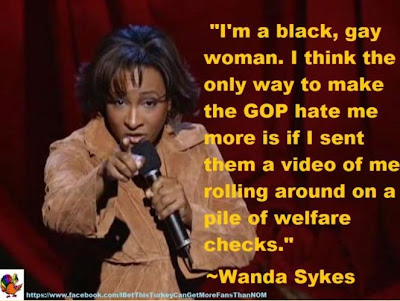 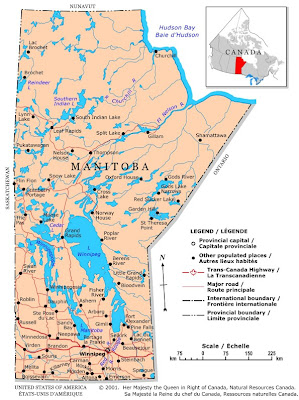 Map of the Province of Manitoba, click for larger version.
#######


What follows below is a very compressed and abridged version of a larger entry I had planned ...
Here is one of what I intended to be a regular series but hasn't so far worked out that way. It is one of my "geographical oddities and extremities" features. 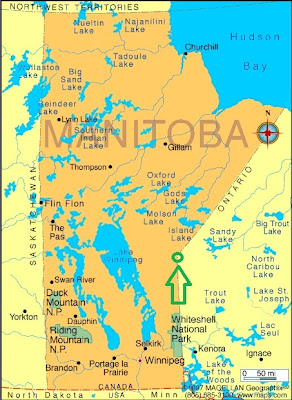 It involves a geographical (rather than natural) spot that is a "kink" point on the provincial boundary of the Canadian provinces of Manitoba and Ontario (circled in green on this map with arrow pointing at it). 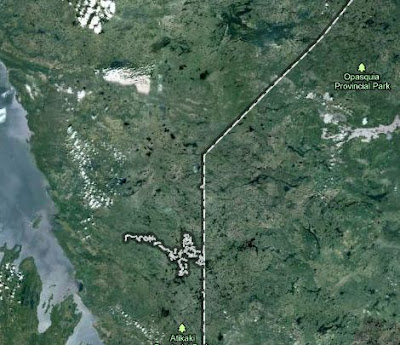 Google map aerial satellite view -- wide view.
The question falls in the category of "Atlas of Canada" and I received a en réponse à votre demande about a week later on Sept. 10th with what I was seeking.
In particular, wanted to find information on this particular location and if there was a marker at the spot on the EXACT POINT on the Manitoba-Ontario boundary where the north-south running provincial border veers off on a NE-SW line to intersect eventually the southern shore of Hudson Bay. 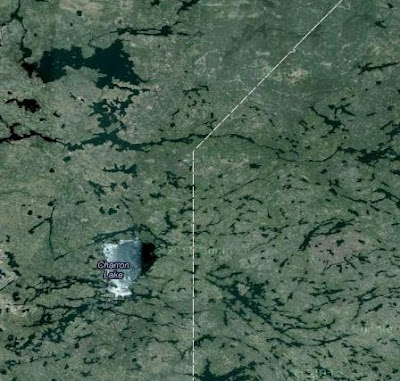 Google map aerial satellite view -- honing in, but the border shape and remote wilderness location ensure that the scale never seems to change (what is that effect called?)
#######


Based on my own online research, I surmised that the boundary point was established in 1912 (although it may in fact have been in 1929) and it is in the Kewatinook electoral division. Furthermore, in trying to decipher the township / section / range numbering system that Manitoba uses, it appears to be at the corner of Township 44, Section 36, Range 16E . 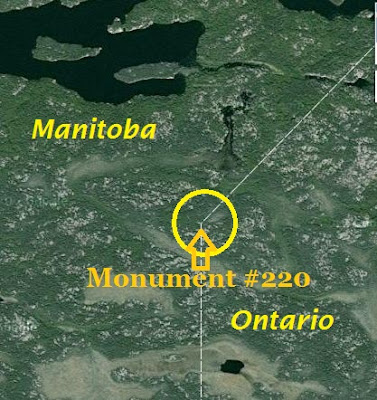 
The response sent from "Alex" on September 10, 2012 included the picture posted below taken during a 1929 survey. It shows what is Monument 220 on the exact spot in question. It is where what is known as the 12th baseline (just shy of 53N latitude) intersects the meridional boundary of Manitoba and Ontario extending north from the U.S.-Canada border at Lake of the Woods (as described in the caption accompanying the picture below along what is just east of the 96W longitude). I believe it is actually the intersection of 52-deg 50-min N and 95-deg 50-min W. As for what actual place names are near Monument 220, I really can't find anything except Charron Lake. 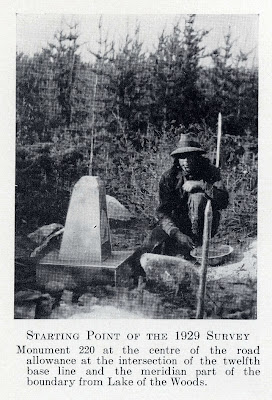 A 1929 surveying photo showing Monument 220 at the "kink" point on the Manitoba - Ontario border. I wonder who that fellow was.
Oh, yes, I am ASSUMING that the monument is still there. No more recent pictures were available from NRCan that "Alex" could locate.
#######


OK, I guess that's about all for now. Maybe I'll go out for a bit.
I intend to post the final batch of Wildwood, New Jersey pics within the next week.
--Regulus
Posted by Regulus at 1:03 AM