The Earnestness and Difficulty of Regular Regulus Blogging 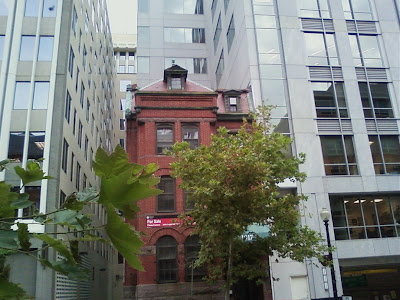 The curious, even mysterious "Zion Building" at 1017 12th Street NW, Washington, D.C., 7:10PM, Aug. 15, 2012.
I know it is called the Zion Building because it says it in small letters on the front directory. Otherwise, there is no reference to this name. 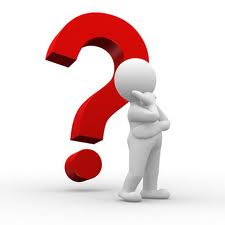 I have mentioned it before here and here. There are (were?) some strangely named businesses in there such as Falcon Express and the Lojec Foundation.


I've no clue what they do. There is really nothing online for them.
I was walking home from work on Wednesday when I took this picture. I haven't walked home from work much lately as I've been mostly going to the gym after work and I ride the Metro to Farragut West and walk there and thence home. Last night, I walked home, stopping en route at No. 9 on P Street.
#######
This is an actual quick update to this blog. I have been finding it quite difficult to update this blog owing to the tremendous time (as in 3 to 6 hours typically) that it takes to post a complete entry. I simply don't have the time. Updating this blog has become a difficult chore. And it's not like I have that many readers, and the whole point of it was for it to be enjoyable.
At this point, I have two entries in draft form -- including the Florida fiasco one -- that I cannot seem to finish. 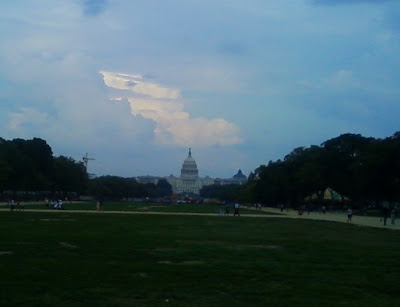 Looking east down the National Mall toward the U.S. Capitol Building with a towering cumulus (congestus) cloud behind it. I took this picture on Aug. 15, 2012 at 6:15PM as I started walking home. I estimate the cloud (which subsequently formed into a thunderstorm) to have been about 20 to 30 miles east -- near the Chesapeake Bay around Annapolis.
#######
The other issue that I want to post links to a series of articles -- at present, pieces by Paul Krugman, Michael Lind, Glenn Greenwald (who, it turns out, lives in Rio de Janeiro, Brazil and is moving his columns over to the U.K. Guardian from Salon.com), and at least one other. But even that is a chore requiring so many links and pictures and formatting. Plus my own political commentary. It's just not easy.
Then there is the whole weather / climate angle stuff that I love to discuss.
Anyway, it's very late night now in the wee hours of Friday morning. Now I hope what happened in the wee hours of last week doesn't happen again tonight -- or ever. Of note, channel 4 WRC aired the interview with me on its 6PM Friday evening newscast. However, I did not see it -- nor did anyone I know EXCEPT my boss, who e-mailed me. 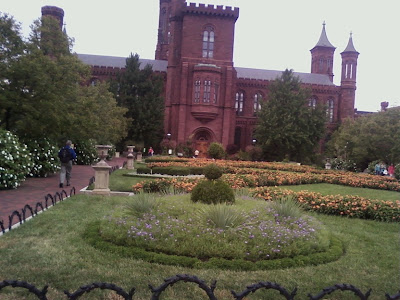 The Enid Haupt Garden, Smithsonian Institution, Washington, D.C., 6:11PM, Aug. 15, 2012. I had just left DOE and started my walk home.
#######
My summertime cold / flu this week appears to have fully ended. Also, SO FAR, the "fix" to my computer I mentioned in the last entry is working well -- NO more "BSOD" crashes. However, Windows wants to update this or that, and it is INVARIABLY worse after these updates.
I made it to the gym tonight and then to Larry's Lounge.
Having said all of this, I intend to update this blog tomorrow (Friday) evening during a 3 to 5 hour free period. It will be the entry I intended to post this past Monday, although updated a bit.
But that may be my last entry until about Wednesday as I need to do editing work for my former co-worker on two chapters of her dissertation that I mentioned in my previous entry. She already gave me $100 -- of the $150 to $200 to which we agreed (yes, this is a much lower amount than a "professional editing" firm would get, although it is only 69 pages double-spaced). I told M. I would have it done next week. 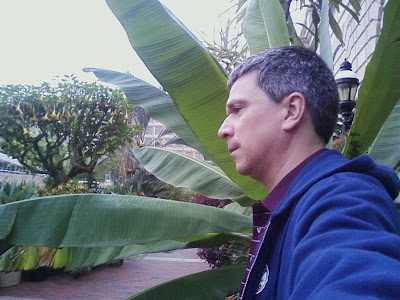 Yours truly in the Enid Haupt Garden, Smithsonian Institution, Washington, D.C., 6:13PM, Aug. 15, 2012.
As it is, I need to have it completed before my planned trip with Gary and Wendy to Wildwood Crest, New Jersey next Friday. We are going for 4-1/2 days / nights.
OK, that's all for now.
Goodnight.
--Regulus
Posted by Regulus at 2:01 AM