Back from the Jersey Shore -- Interim Update

Updated 12:30AM 8/30/2012: I was not able to finish the new entry tonight of Jersey shore pictures. I'll try again tomorrow although, it conceivably may not be until Saturday. 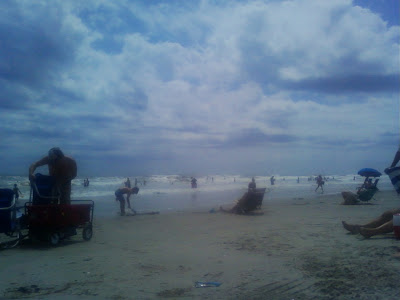 
I am back from my Jersey shore trip to Wildwood (well, actually, Wildwood Crest). I actually returned with Gary and Wendy last night around 12:30AM in a fast drive back via 295 and 95 -- we took the Cape May - Lewes ferry on the way there. I will have a lot more to say on this trip in what two planned entries, the first containing my pictures and the second containing the pictures that Wendy took. 
The trip was very nice, except it was too short and my never-ending fixation on You-Know-Who (that would be Mr. Sirius / MH) flared up badly last Tuesday and filled my thoughts to the point of depression. I realize it is a symptom and not a cause, but there you have it.
However, I still had a very good time, and Gary and Wendy are terrific traveling companions. We stayed at the Jolly Roger Motel in Wildwood Crest (a dry town, although neighboring Wildwood is not). 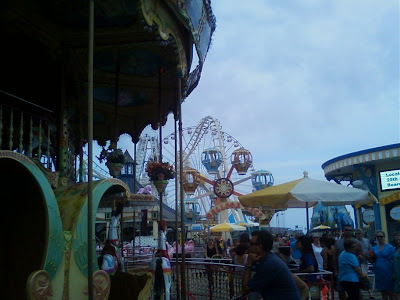 
The weather while there was mostly agreeable with sunshine mixed with cloudy and showery spells. The big exception was Saturday evening into Saturday night which featured an amazingly long-lived violent thunderstorm on Saturday night, about which I will have more to say. There must have been 5 inches of rain (there was flooding) and about as much lightning as I have ever seen in a single event. And the small but violent cluster of long-lived storms remained directly over southern Cape May County. Of note, the power flashed several times but did not go out as it would have in the D.C. area. 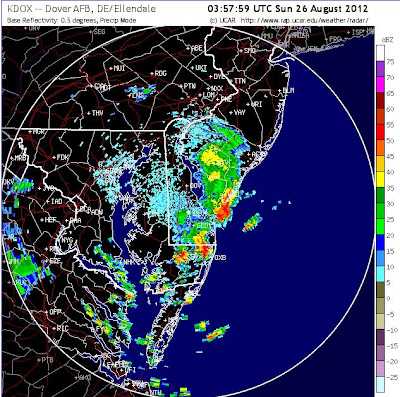 DOX base reflectivity radar at 0400 UTC (midnight EDT), Aug. 26, 2012 during the height of the storm over Cape May County. (This image was one of a series that is archived for several days on the UCAR weather radar site.)
As Gary noted, the 8-hour loop shows a training "feeder band" right along the coastline with smaller vortices evident within the feeder band. He also noted that anomalously warm sea surface temps (around 78F) combined with frictional convergence of the onshore wind blowing over the sea and then onto the shore fueled these long-lived storms.
#######


Of note, back home here there was heavy rainfall on Sunday around here -- especially in Baltimore and along the Chesapeake Bay. KBWI received 3.37 inches of rain in that two-day event (all but 0.01" of which fell on Sunday, Aug. 26th), exactly equal to what fell at the Maryland Science Center (KDMH), all on Sunday. By contrast, KDCA had only 0.34 inches and KIAD had 0.44 inches. Other areas along the bay had in excess of 5 inches.
The weather in both places was driven by an upper-level low off the Southeast coast with a deep plume of tropical moisture. 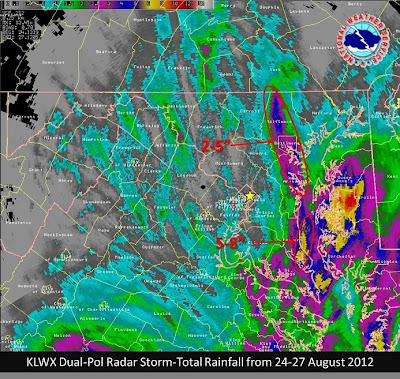 
Today I managed to ease back into my routine with just a part-day at work (originally I was going to take off the whole day) and then I went with my supervisor / co-worker / friend to the weekly bar event, tonight at Spider Kelly's in Arlington. Thereafter, I met up with Kristof at Larry's Lounge.
I am home now watching TV -- sitcom reruns on TV Land and Hallmark.
Speaking of the weather, Hurricane Birth Certificate, I mean, Isaac is striking the Louisiana coastline tonight including the New Orleans area. 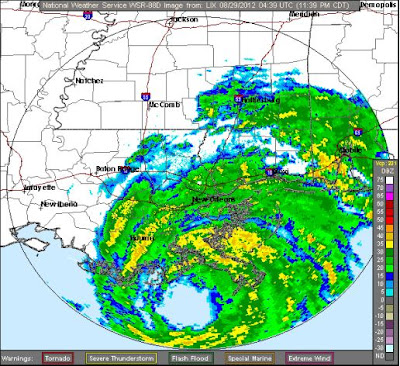 The New Orleans/Baton Rouge Weather Forecast Office (LIX) in Slidell, La., showing Hurricane Isaac lurking offshore at 11:39PM CDT Aug. 29, 2012.
As of the 10PM CDT advisory, the tropical cyclone -- subject of a week's worth of Weather Channel hype and hysteria -- is a category 1 storm with top sustained winds of 80mph. The storm is centered 75 miles SSE of New Orleans near the Mouth of the Mississippi (though in the radar image below, it appears to be centered due south of New Orleans). 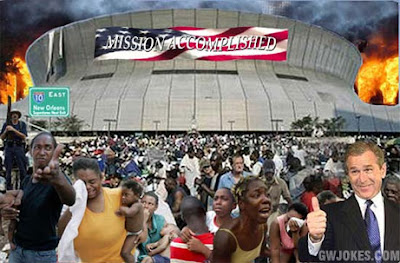 Meanwhile, over in Tampa -- originally forecasted to be in the storm's path -- is where GOP Cultic Hate Fest '12 is underway. And of historical note, Hurricane Katrina and "War Hero" / "Can Have a Beer With Him" Bush are the objects of non-devotion. As for that Hate Fest, Paul Krugman's piece on Friday about Paul Ryan's Ayn Rand / Atlas Shrugged fetish is really worth a read.
OK, that's all for now. I intend to have a full entry posted late tomorrow (in time for Thursday morning). I may repost some of the Wildwood pictures in this entry along with quite a few more.
--Regulus
Posted by Regulus at 1:07 AM