It Happened One Night -OR- Rain in the Dark 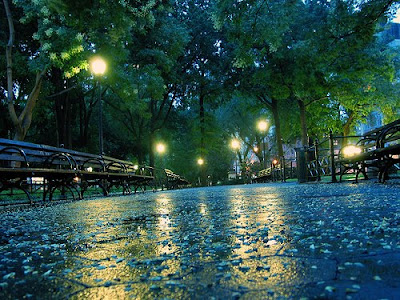 I wish I knew where this photo was taken. It's a rainy late spring / early summer evening in a city park.
#######


It is an overcast, breezy, thickly humid July evening with air temperatures around 75F and dew points around 71F here in the District of Columbia. There has been a flash flood watch in effect all day region-wide but only modest amounts of needed rain have fallen through 7PM including 0.10" at National Airport (KDCA), 0.02" at BWI Airport (KBWI), and trace at Dulles Airport (KIAD). 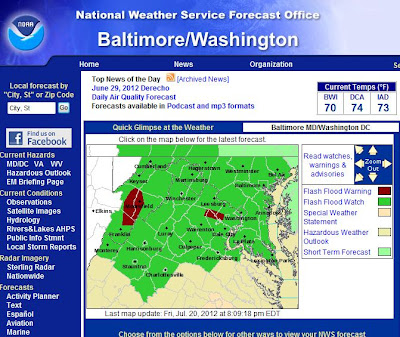 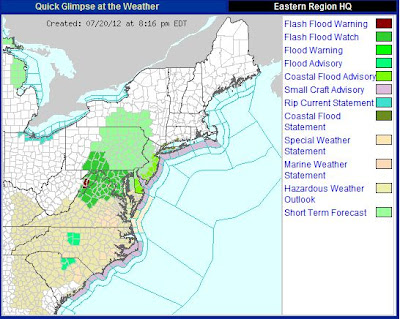 
However, there is a quasi-stationary boundary undulated across the region with a shortwave along it that is helping to trigger batches of heavy rainfall just west of D.C. back into the Potomac highlands and Blue Ridge. So there may be some additional rainfall. We need the rain, but not sudden flash flooding rains, of course.
A cluster of drenching thunderstorms crossed the area last night with 1.04" of rain at KBWI and 1.02" at KIAD. As for National Airport, it only had 0.42" but more than that fell here in this part of the District. 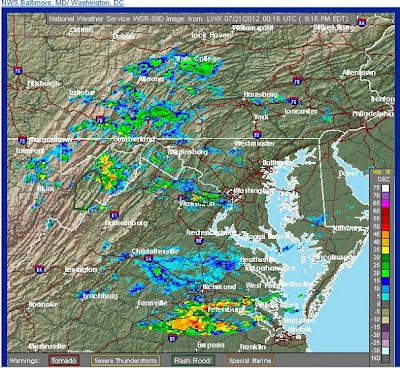 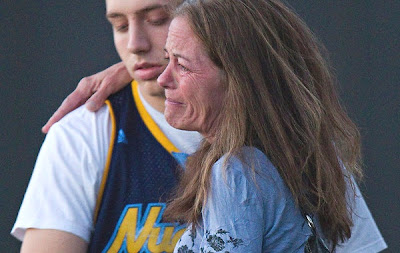 Jacob Stevens and his tearful mom hug in Aurora, Colorado on July 20, 2012. Jacob was interviewed as a witness by the Aurora police after last night's movie theatre mass shooting.
Concerning that mass killing of at least 12 people and 59 or so injured at the Century 16 movie theatre in Aurora, Colorado just after midnight at a showing of the new Batman movie The Dark Knight Rises ... 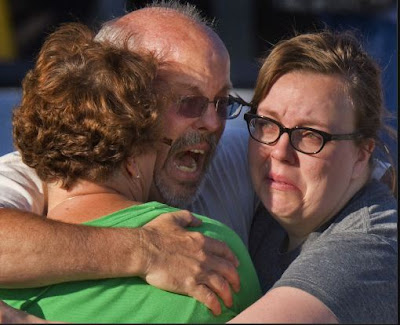 Tom Sullivan and family members wait desperately for information on his unaccounted for son, Kevin Sullivan, who was in the theatre last night when it happened. Kevin was there for his 27th birthday.
Updated 6:45PM 7/22/2012: Kevin Sullivan was subsequently confirmed as being among the dead, source here.
####### 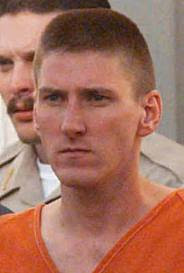 ... transformed into the "lone wolf / lone gunman" -- usually with crudely and violently rightwing political leanings springing directly from America's warped, nativist, and wacky ideologies -- that produces these mass shootings with some regularity.

Add into that America's psycho-sexual obsession with amassing fire arms, and there you have it.


What the U.S. lacks in terrible political violence that other countries have, it partially makes up for in having a society with so much violent crime -- with this "lone gunman" element as the most random and disturbing part of it. 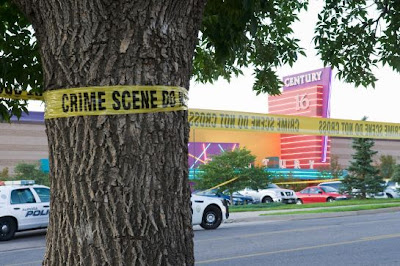 
This shooting is apparently the largest in American history in terms of casualties because of the numbers injured -- put at 71. Maybe James Holmes will get a special NRA "Lone Wolf" award.
Such mass shootings will happen again and again and again. 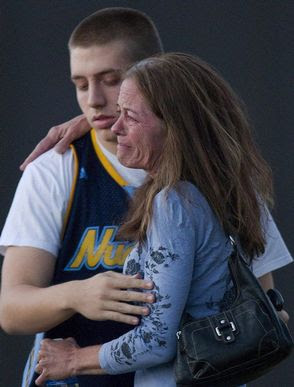 As for the picture of the lady (Tammi Stevens) with her son (Jacob) -- here in a slightly different perspective -- it tells such a powerful story. This is why I love photojournalism – for all the aspects and traumas of the human condition that it can capture and communicate.


As it is Friday, I want to link to Paul Krugman's New York Times op-ed. Today's was entitled "The Pathos of Plutocrats" and my favorite quote: 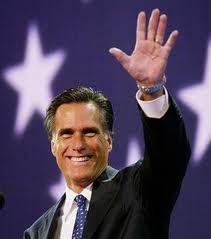 "Because the rich are different from you and me, many of them are incredibly self-centered. They don't even see how funny it is -- how ridiculous they look -- when they attribute the weakness of a $15 trillion economy to their own hurt feelings. After all, who's going to tell them? They're safely ensconced in a bubble of deference and flattery ... [F. Scott] Fitzgerald again, about the very rich: 'They think, deep down, that they are better than we are.'"


As ever, I strongly recommend reading Paul Krugman's NYT-hosted blog. 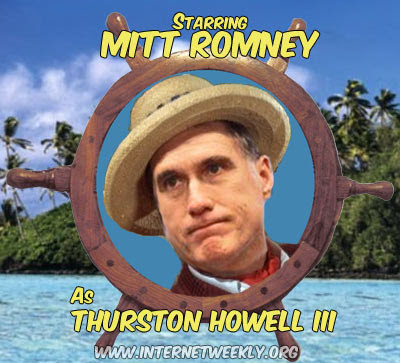 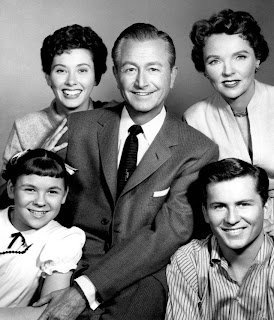 I like Jane Wyatt's character but I can't help but find Robert Young's Jim Anderson character annoying what with his non-stop, know-it-all happy smile and somewhat condescending attitude that he exudes through most of his scenes.


As for Billy Gray, he is still around and going strong at age 74, but back in 1983 -- just six years after he was in a Father Knows Best Christmas time reunion movie -- he rather strongly repudiated the whole show. He has a big collection of racing types of motorcycles. 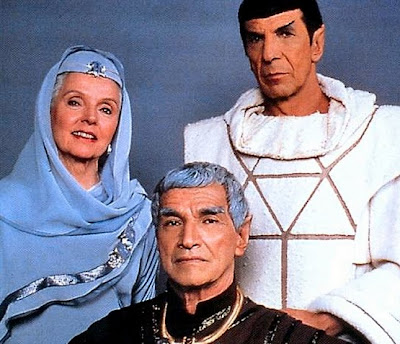 Jane Wyatt later played the role of Spock's human mother Amanda in an episode of Star Trek: The Original Series and in the 1986 movie Star Trek IV: The Voyage Home. 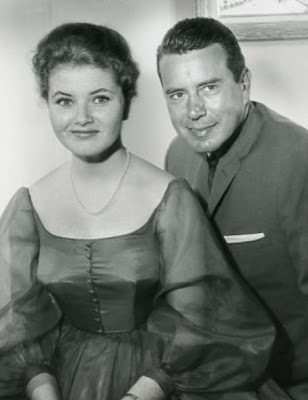 I've really gotten to like the show Bachelor Father with John Forsythe and Noreen Corcoran (pictured above in a promo photo from 1961), and Sammee Tong, who plays "house boy" Peter Tong. No, not the British DJ, Pete Tong. 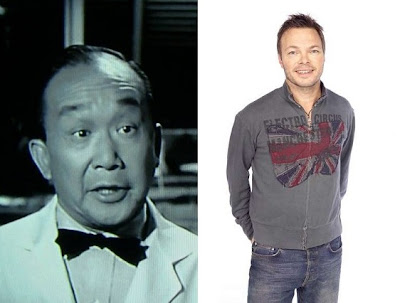 Sammee Tong as Peter Tong (left) and Peter Tong, a.k.a., Pete Tong (right).
Kristof, you look just like him. Sammee Tong, that is. Ha ha.


So tonight I think I am going to go to Nellie's. I need to go to the gym tomorrow and either Sunday or Monday. I would prefer to go on Sunday so that I can get a haircut on Monday -- since I'm starting to look like a salt-and-pepper Chia Pet again -- but I often get such a late start on Sundays and the YMCA closes at 5:30PM. 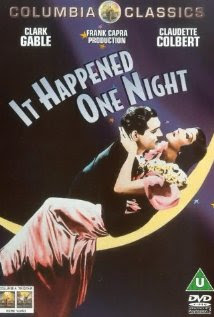 At this point, I am supposed to go with my co-worker / friend to the Wednesday night Screen on the Green movie on the National Mall. Usually these summertime "SOTG" movies are on Monday nights but next week it is on Wednesday night. The movie being shown is It Happened One Night.

Then on Thursday I head down to Florida to visit my dad in -- *sigh* -- Flagler Beach, flying to Daytona Beach. I am scheduled to return on July 31st (the following Tuesday). 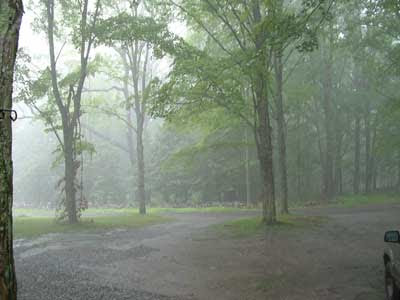 My next update will be either over the weekend or Monday. Oh, yes, as I post this at 10:30PM, the flash flood watch has been dropped. The predicted rain was mostly a bust.
--Regulus
Posted by Regulus at 10:34 PM