Entry #700: Runaway Greenland Melting -OR- Sallying Forth and Movin' On Up ... 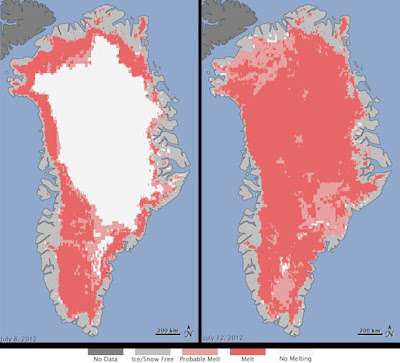 Satellite measurements of surface and near surface showing melting anomalies on July 8th and July 12th, 2012.
#######


OK, sweetie, there's A LOT to talk about, but alas it is 12:07AM as I start this entry and I'm tired and drunk, having had a few drinks at Larry's Lounge with Kristof -- but AFTER a decent gym workout tonight -- my third in three days running.
Alas, I will not be able to go to the gym tomorrow and not until the day after I return from my Florida trip, which makes it next Wednesday (one week away). 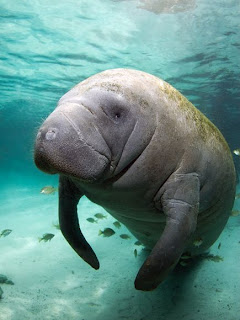 I need to update this blog before I head down to Florida (Flagler Beach ... to see my dad ... *sigh* ... I'm not exactly thrilled but it is something I have to do.)


First off, two satellite-based sensors -- one aboard ISRO's Oceansat-2 and NASA's MODIS -- indicate that at least the uppermost part of the icesheets of Greenland appear to have undergone a runaway melting episode for several days earlier this month across virtually the entire surface -- and this follows record heat across its glacial interiors. 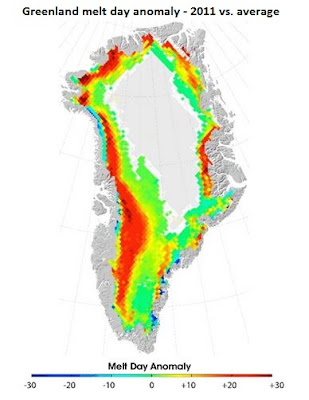 Here is a direct link to the NASA article.

Image at left: Greenland melt day anomaly, 2011 versus 1979 - 2010 average, source here. This shows the extreme melting at the edges of Greenland.

Could this be it??


Could this be the start of the catastrophic melting / breakup of the Greenland icesheets that leads quickly to a thermohaline catastrophe and new Younger Dryas??
We know, Kristof -- "WE NEED MORE DATA!"
#######


America's first female astronaut Sally Ride -- who rode aboard the Space Shuttle Challenger in June 1983 and later in 1984 -- has died at age 61 from cancer. 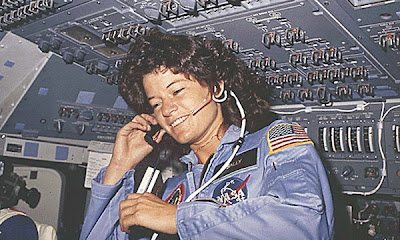 Sally Ride aboard the Space Shuttle Challenger in June 1983 on her maiden voyage into low Earth orbit.
BTW, Sally Ride was gay and lived with her partner for many years. So the first American female astronaut in space was a lesbian. Here is her New York Times obituary.


I think that's awesome. (A gay guy likely couldn't do it -- 'cuz he drinks too much and had emotional / neurotic problems.) 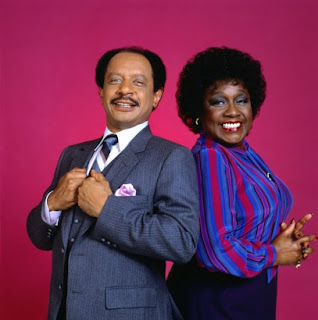 Speaking of (maybe) gay, actor Sherman Hemsley, forever known as the diminutive, aggressive, bigoted George Jefferson from The Jeffersons -- and earlier than that, All in the Family -- has died at age 74. I mention it this way because in all likelihood the reclusive Hemsley was gay. Here is his New York Times obituary and here is his Newsday obituary.
OK, those cover the main topics I wanted to discuss. I will try to update this blog tomorrow (Wednesday) night or Thursday morning before I leave. I still need to post the images Wendy sent me.
--Regulus
Posted by Regulus at 1:24 AM