The Heat and the Fury (The Prequel) 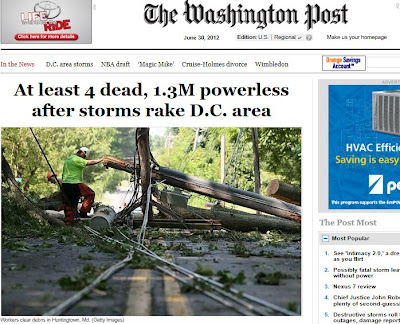 Headline of The Washington Post online (image cropped a bit) a short while ago.
I have drafted an entry discussing yesterday's weather day to remember -- both the record-breaking heat (104F at DCA, just like last July 29th) and the violent storms that exploded across the Washington - Baltimore area last night in a textbook case of a "MCS" (mesoscale convective system). 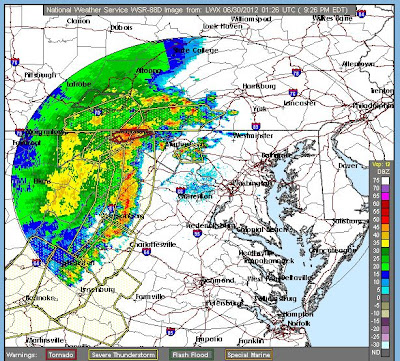 
At least four five people died area wide and about 1.3 million customers (homes and businesses) have no power.  Winds gusted to hurricane force including 70MPH or so at DCA and there was much-needed drenching rain (0.59" at DCA).


Today, though, here in "inner" D.C. this Saturday, everything is fine except for a few downed tree limbs. Storm-related power outages "in the city" where power lines are underground are extremely rare. 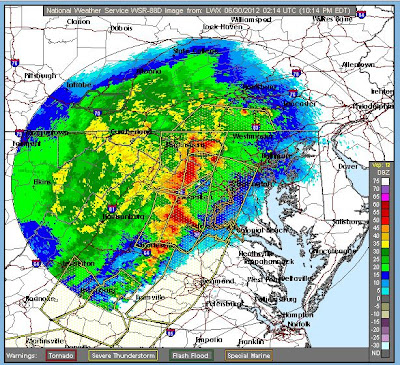 The Sterling (LWX) radar in standard composite mode reflectivity, 10:14PM EDT, June 29, 2012. Composite (as opposed to base) mode reflectivity tends to exaggerate things but in this case it is warranted.
#######


For a couple of minutes, I thought I had made a mistake going outside. The fast moving approaching squall was all the more frightening looking in the dim nighttime illumination of the city lights that was punctuated by dazzling flashes of blue-white lightning. And then the 70mph gust exploded through in a blizzard of dust, the air alive with that freight train-like roar the wind makes above a certain speed. People were scurrying wildly amid hoots, shouts, and screams.
I called my mom to warn her -- she lives in Anne Arundel County in Millersville in a trailer -- of the approaching storms and I actually reached her. Then I got to Larry's Lounge just as sheets of rain started to fall. I want to post her subsequent texts when the storm hit there. They read like a haiku. 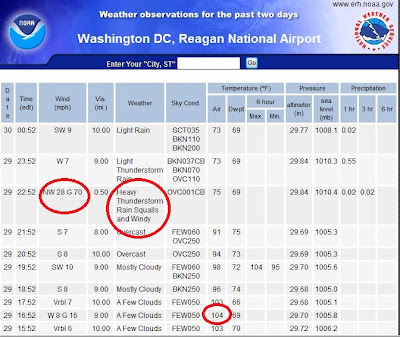 
Earlier in the day, there was exteme heat, including the 104F at DCA -- the hottest ever in June in Washington, D.C., for the full climate record back to 1871. 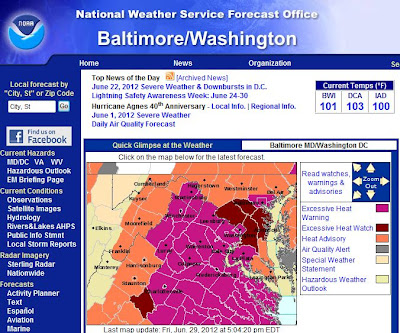 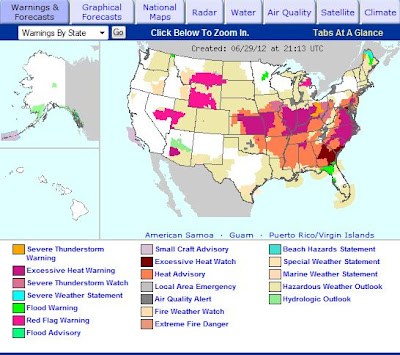 
However, while I have drafted the entry, there is so much text that it would take me a a few hours to get all the images posted and formatting, by which time I will be unable to go to the gym. I said I was not going to let this blog writing drive my life so much any more and I am not.
Tonight, I'm going to DG's for a house party that is still on because he has power. He lives up 16th Street in the 16th Street Heights area (or whatever that area is called). And tomorrow I have a BBQ to go to in Arlington, which is also still on because J. has power, though many of his neighbors do not.
I'll try to post the full entry tomorrow. It may again include some of the above images.