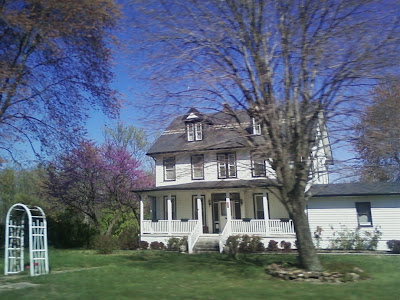 A house along Gambrill Road near Sleepy Hollow Road in unincorporated Severn (or perhaps Gambrills), Maryland on a spring day, 3:56PM, April 7, 2012. This is deep in Anny Runnell Kenny.
#######

This is just a quick Monday morning posting to say that I plan to post a full entry tonight (probably just after midnight for date / time stamp purposes).
I had a nice visit with my mom on Saturday into yesterday (Easter Sunday), but then I returned to D.C. I went with Kristof to Nellie's and Larry's Lounge last night and it was the usual doings.
I feel awful this morning and just want to take a few hours off and sleep some more but I'll force myself to get moving. I've no idea what to expect at work today, but then again, I never do. The job will likely end abruptly some day and that will be that -- my time in D.C. probably over.
The day is once again ENDLESSLY sunny and dry. There are red flag warnings up for an unusually large part of the Northeastern quarter of the country from Virginia (the whole state including the extreme southwestern part that is also in the freeze watch) to New England. This includes all of Maryland except Garrett County, all of New Jersey, Rhode Island, Connecticut, Massachusetts, and most of Pennsylvania. 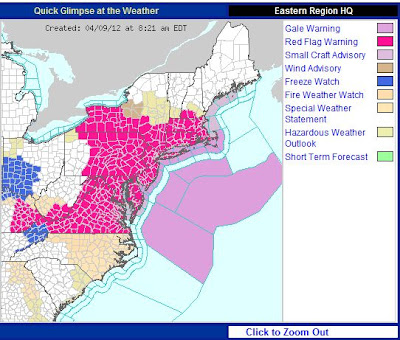 Here are the advisories in place as of 8:21AM EDT this morning, April 9, 2012 for the NWS Eastern Region. The scarlet red are red flag warnings -- meaning conditions are favorable for rapid ("explosive") wildfire growth.
####### 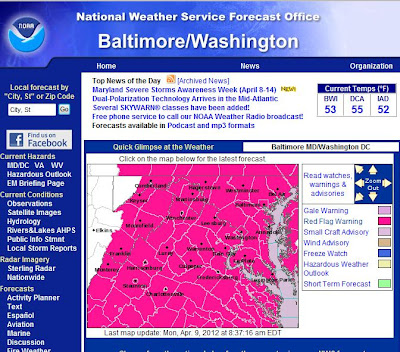 
We are rapidly entering drought conditions this spring -- which is the worst time of year to have a drought. And the pollen is stratospheric, so to speak, and my sinues / allergies are causing me much suffering even as I keep taking Claritin. A front is forecasted to move through later -- reloading the stalled upper level low over the St. Lawrence River / Gaspe Peninsual -- and there may be a few showers (30POP) but overall we are in a prolonged dry spell with no sign of it ending.
OK, that's all for now.