Off the Grid -OR- A Sunday Side Street Washington Walkabout 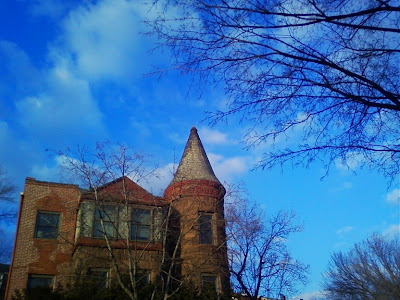 The turret-capped brick corner house at V and 17 Streets NW (bounded on the other side by Florida Avenue), Washington, D.C., on a tranquil, chilly winter afternoon, 4:38PM, Feb. 5, 2012.
This is my planned big update for the work week, except instead of political commentary in my ideologically convoluted way that takes forever to post and no one reads, I'm instead just going to post the pictures I took on Sunday while walking around Kalorama and adjoining neighborhoods here in D.C., as well as a couple I took today.
####### 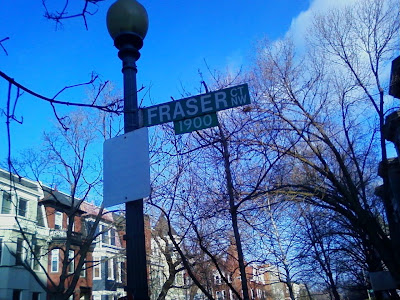 
Many of the D.C. street images in this entry are of (1) backstreets / side streets / residential streets; and (2) the bulk of the streets do not follow the regular D.C. grid layout.
I've discussed that layout previously in my blogging but I will do so again here in this entry. The District of Columbia is divided into four directional quadrants based on the location of the U.S. Capitol Building. Those quadrants are Northwest (NW), Northeast (NE), Southeast (SE), and Southwest (SW). 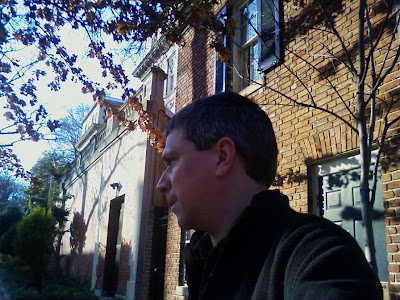 Yours truly standing next to a row of small row house structures -- including one housing an organization called the National Campaign for a Peace Tax Fund and adjoining the Royal Thai Embassy Residence, Decatur Place NW, Washington, D.C., 3:54PM, Feb. 5, 2012.
####### 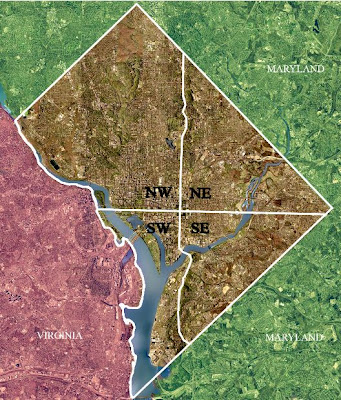 Here is a map of the layout of the four directional quadrants of the District of Columbia.
####### 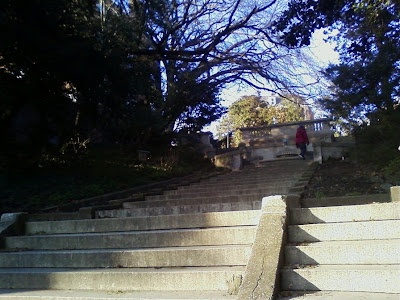 
Owing to the location of the U.S. Capitol Building and the "truncated" nature of the 10 mile by 10 miles square -- the entire Virginia side is missing, today existing as Arlington County, Va., or the City of Alexandria, Va., following the 1847 retrocession, itself an act of really questionable constitutionality -- the Northwest quadrant is the largest of the four while the Southwest quadrant is the smallest. Indeed, if the Virginia side had never been retroceded back, Arlington would mostly be Southwest D.C. 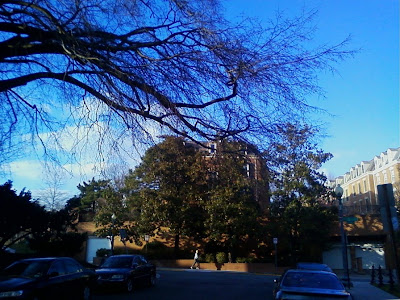 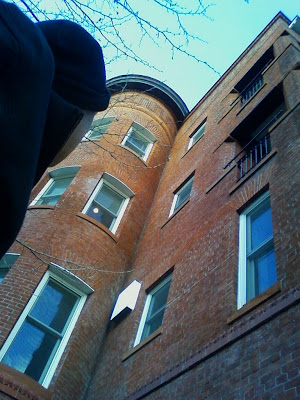 The north-south running streets of present-day D.C. are numbered while the east-west running ones are lettered in one of four alphabets -- A to W, skipping J (since "I" and "J" are identical letters, or appeared so in the era before type-setting, and it has nothing to do with Pierre Charles L'Enfant not liking John Jay); two syllable A to W, skipping J; three syllable A to W; and floral (A to V).


The floral alphabet is not based on syllables but instead is trees, flowers, and shrubs -- Aspen, Butternut, Cedar, Dahlia, etc., through Verbena, located almost at the North Cornerstone of the District of Columbia itself and "adjoining" the highest street address in D.C., 8500 East Beach Drive (which is next to 1799 Verbena Street) NW.
These are the first, second, third, and fourth alphabets, respectively. 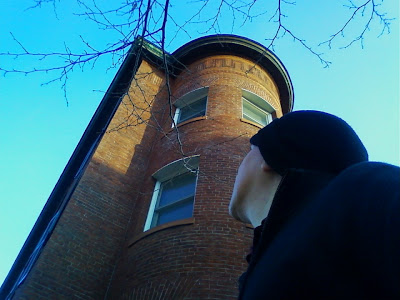 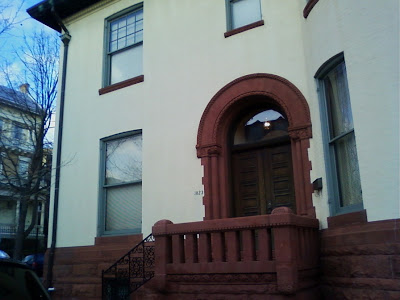 
There are actually multiple street alphabets in use separated by natural or other boundaries, such as Rock Creek. Thus, the two-syllable "U" east of Rock Creek Park is Upshur Street but west of Rock Creek Park is Upton Street; the three-syllable "J" is "Jefferson" and "Jenifer" (one "n"), respectively.
I should note that this is how it runs north of the National Mall / East Capitol Street. Heading south, one "runs out" of D.C. -- at Southern Avenue -- in the 3rd alphabet -- Joliet Street (three syllable "J") is the farthest south of all. 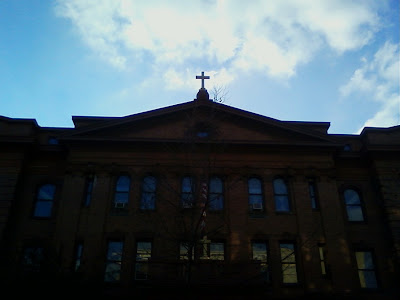 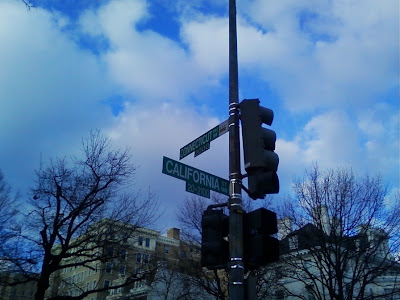 
What's confusing is California Street -- I've seen on at least one old map (circa 1890) that it was called California Avenue. As for Ohio Avenue, it ceased to exist when the Federal Triangle complex was constructed. Ohio Drive today loops around East Potomac Park. It is actually in Southwest D.C., so it is Ohio Drive, SW. 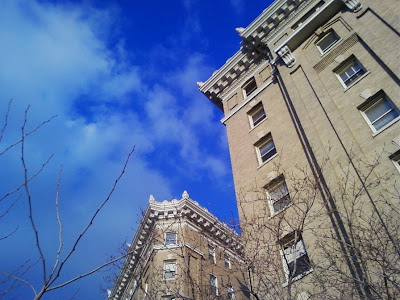 
Oh, yes, on either side of the National Mall and well into Capitol Hill, what was once B Street was renamed Constitution Ave. (north side) and Independence Ave. (south side) while on the National Mall, what should be A Street is Madison Drive (north side) and Jefferson Drive (south side) -- not to be confused with Jefferson and Madison Streets in the three-syllable alphabets. 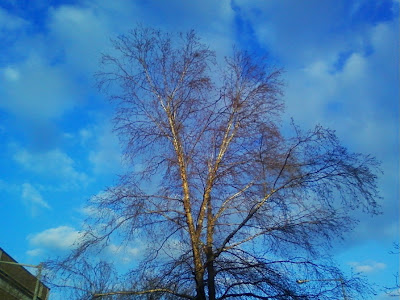 A winter bare (birch?) tree at the triangular meeting plot of V Street and Florida Avenue NW, Washington, D.C., 4:36PM, Feb. 5, 2012. It was the sort of tranquil but seasonably chilly winter weather day that is pleasant.
#######


This layout was originally started by Pierre Charles L'Enfant himself but it extended only to the original City of Washington -- within the bounds of Boundary Street, today Florida Avenue. It was the 1871 District of Columbia Organic Act that made Washington City and the entire District of Columbia including Washington County and the City of Georgetown one unified political entity. It was later in the 1890s that the street naming system was standardized (as mandated by Congress). 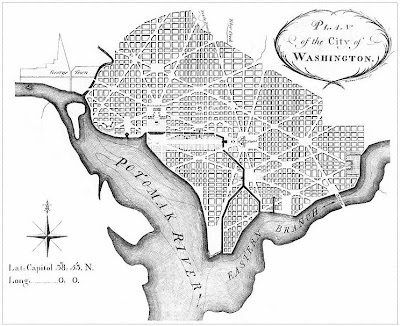 Pierre Charles L'Enfant's layout for the City of Washington as modified by Andrew Ellicott, 1792.
Anyway, ALL of this was build-up to make the point that there are countless, countless exceptions to this grid system and the pictures in here are primarily from those exceptions. 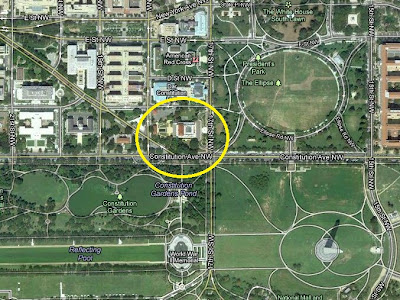 Google aerial view off the Washington Monument and White House grounds with the Organization of American States (OAS) grounds circled in yellow. Within that circle is the geographic center of the original Federal Territory.
That is, if the District of Columbia had remained the 10x-10 mile (or 100-square miles) entity, the geographic center would be somewhere on the grounds of what is now the OAS between Constitution Ave. and C, 17th and 18th Streets, NW.
####### 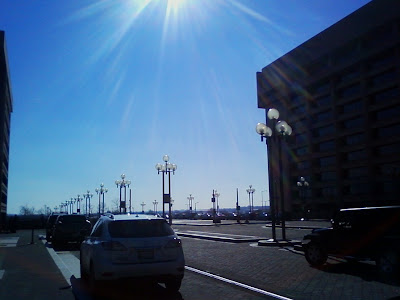 A bright sunny winter's day in Washington, D.C., looking out across the miles from L'Enfant Promenade into Northern Virginia (toward National Airport and Alexandria beyond), 1:31PM, Feb. 7, 2012.
#######


Oh, yes, there is snow in the forecast. The Sterling LWX automated snow forecast -- which changes constantly, always in the end to end up with nothing this winter and last -- now has the District of Columbia shaded in 1" of snow. This will change three or more times before the actual event arrives. 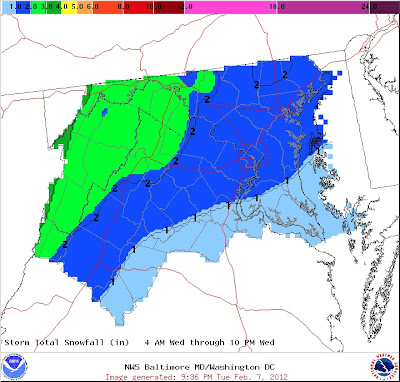 The LWX automated snowfall forecast for tomorrow for its county warning area.
Updated 6PM 2/8/2012: The snowfall amount turned out, as I figured, to be nil. And the above map got adjusted correspondingly during the day until we weren't in any shaded area. Instead, in D.C. proper, it just rained / snizzled (sleet + drizzled) a bit.
Of note, the first week of February is averaging area-wide 8F to 10F above normal including at DCA (+9.1F), BWI (+9.8F), and IAD (+8.5F).
#######


Earlier tonight after work, I stopped at The Saloon on U Street for its Tuesday night steak dinner. 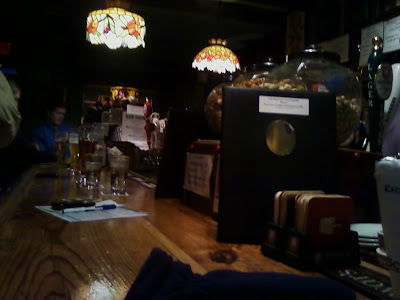 The bar at The Saloon in the 1200 block of U Street NW. As I've mentioned, there are no televisions in this place and I really like that fact.
#######


OK, that's all for now. My next planned update may not Thursday or not until Saturday. Friday night is a big work happy hour at Nellie's.
--Regulus
Posted by Regulus at 12:27 AM