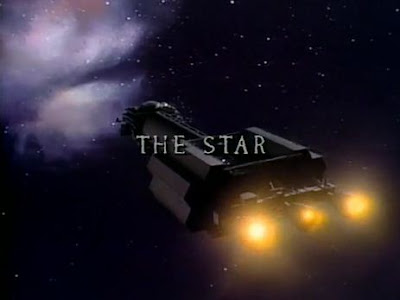 This entry features (below) the YouTube video of the 1980s Twilight Zone series story segment The Star that aired in December 1985 during season 1. The images are mostly screen shots from that video.
This Twilight Zone series was the first revival of the original 1959-1964 series of same name, and it aired from 1985 - 1989. (There was a second revival in 2002 that lasted one season.) (BTW, the first of this 1980s series was called Shatterday and it was directed by Wes Craven and started a young Bruce Willis.) 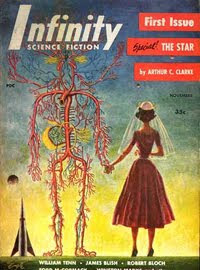 It is based originally on Arthur C. Clarke's short star The Star published in 1955 in the first issue of the short-lived magazine Infinity Science Fiction.

The Star is set centuries hence -- Clarke himself suggested around AD2500 -- as a group of space explorers return to Earth from a distant star system, where they had discovered a subterranean vault that contains all the artifacts of a long-dead advanced human-like civilization that was wiped out when their sun went supernova, destroying their planet.


This advanced, peaceful people simply did not have the means to travel to another star system so they buried a complete record of their civilization and its artifacts on their outermost planet ("about the distance of Pluto from the Sun") for whomever might find it.
They knew their end was coming and died with serene grace. 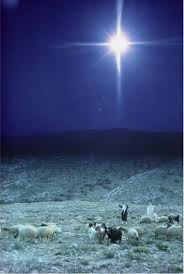 The story is told from the perspective of a Jesuit astrophysicist on the journey home and the terrible crisis of faith he suffers because after he determined the supernova that destroyed the planet and its people was not only seen on Earth, but that it was in fact the Star of Bethlehem ... harking the Birth of Jesus Christ.

In the Clarke story, the discovery causes the priest to lose his faith.


FYI, this was well in keeping with Arthur C. Clarke's total atheism. 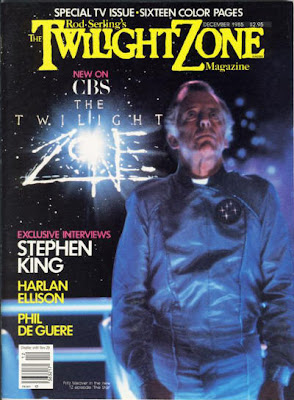 The Twilight Zone adaptation of the story opens with the crew of the spacecraft Magellan (exploring the Galaxy thousands of light years from Earth) discovering (at Christmas) a radio beacon signal coming from a planet orbiting the white dwarf remnant of star that had gone supernova millennia earlier. 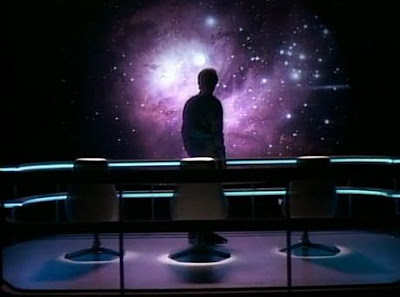 The crew travel to the planet where they encounter the vault (complete with its Eiffel Tower-like pylon structure / radio beacon atop it). 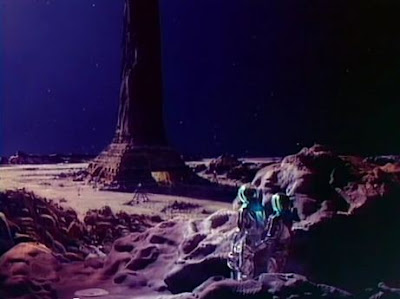 They explore the vault (after filling it with a breathable atmosphere) and find wonderful artifacts including an illuminated music box cube of a sort that fills the place with lovely musical notes. 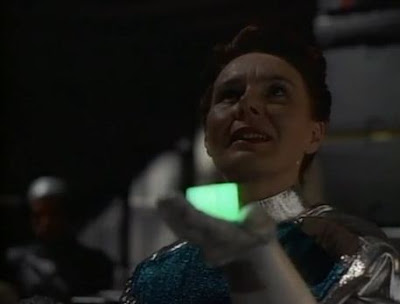 As in the short story The Star, Father Matthew Costigan (Fritz Weaver) discovers the truth and has his crisis of faith. But unlike the Arthur C. Clarke story, in The Twilight Zone version, Father Matthew ends up finding comfort from unlikely source, another astrophysicist, Dr. Chandler (Donald Moffat), who is ambivalent at best about whether God exists.
He and Dr. Chandler had previously engaged in numerous good-spirited theological debates, but they had gotten into an argument in the vault when discussing why any God would allow a peaceful people to be wiped out in a supernova. 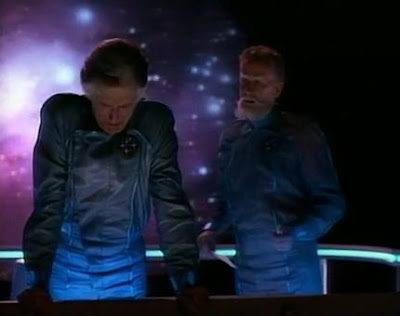 What follows is the dialogue of the climactic scene when the truth is revealed. The "captain" refers to Captain Durant (Elizabeth Huddle), Captain of the Magellan.
Father Matthew: "There was something I didn't tell the captain ... about WHEN this sun went nova."
Dr. Chandler: "You said it exploded in Earth Year 3,120 B.C." 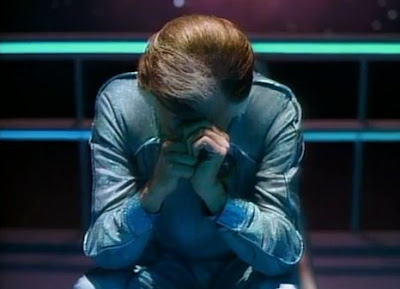 Father Matthew: "It took 3,120 years for the light from the explosion to reach the Earth. Taking into account the Earth's orbital position, its rotation, the nova would have been clearly visible in the Eastern Hemisphere, its light shining more brightly than any other object in the night sky.
"Computations further indicate that it was DIRECTLY overhead at 31 degrees 42 minutes North latitude, 35 degrees 12 minutes East longitude, in a small town in the Judean Hills south of ... JERUSALEM!
Editor's Note: I thought Jesus was born in Bethlehem ...??


"'And, lo, the Star which they saw in the East went before them and they came and stood over where the young child was ...' 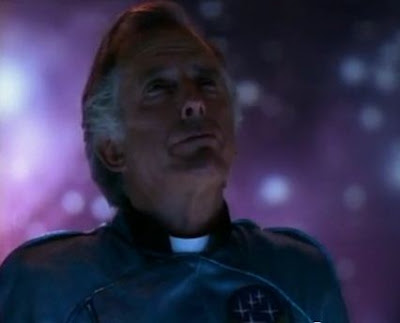 "I have been sitting here in a MOCKERY of prayer, my heart filled not with love but with rage! Oh, God, there were so many stars You might have used!  WHAT WAS THE MEANING OF THESE PEOPLE TO THE FIRE, that the symbol of their passing might light up the skies over Bethlehem?!?" 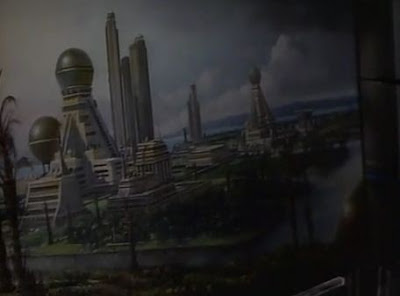 Dr. Chandler, who has come to him to apologize for the earlier argument in the vault, reads him a poem that was found. It was one of the last items placed inside the vault, and hence the first to be found. 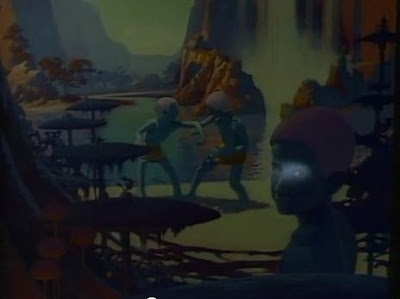 Dr. Chandler reads the poem: "'Mourn not for us, for we have known the Light, have looked on beauty, have lived in peace and loved. Grieve but for those who go alone, unwise, to die in darkness, and never see the Sun.'"
Updated 12/9/2012 since the previous YouTube video was removed. It is now in two parts.
Part 1: The Star - The New Twilight Zone
Part 2: The Star - The New Twilight Zone
He concludes: "Whatever destiny was theirs, Father, they fulfilled it. Perhaps we will discover all they achieved in the records they left behind. But their time had come, and in their passing, they passed their light onto another world. 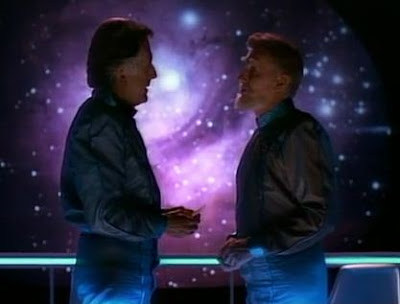 "Whether it is God's Will, or pure random chance, one of a hundred suns that explode every year in the Cosmos, a balance was struck. Perhaps, when we fulfill whatever destiny is ours to fulfill, perhaps we too will light the way for another world." 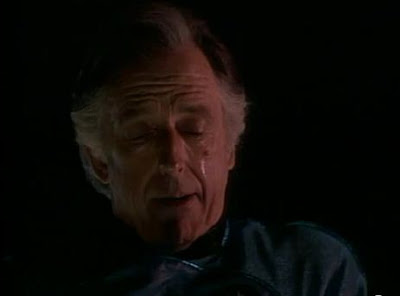 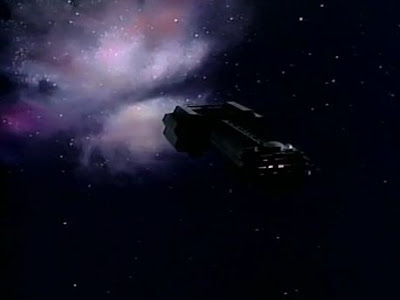 
"The survey ship, Magellan, bearing with it the last legacy of a long dead people. A legacy to be kept and cherished and, in time, bequeathed to a world still unborn. From the current inhabitants ... of the Twilight Zone."
#######


1. The number of supernovas "per (Earth) year" in "the Cosmos" is far higher than that (although earlier Father Matthew gives a figure of a hundred stars exploding per year in the Galaxy, which is probably much too high). 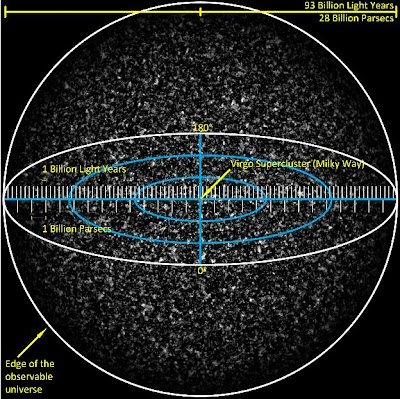 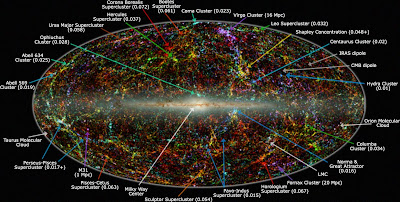 Panoramic view of the entire near-infrared sky derived from the 2MASS Extended Source Catalog (XSC)of more than 1.5 million galaxies showing Large Scale Structure in the Local Universe (a small subset of the Observable Universe).
2. Concerning the Pluto - Sun distance reference early on, an actual supernova, whether Type Ia white dwarf detonation or Type Ib, Ic, or Type II core collapse, as opposed to a star slowly swelling to its red giant phase (the "nova"), is an event of such cataclysmic proportions that a planet at the distance of dwarf planet Pluto (anywhere along its orbit) to the Sun would not matter -- that planet would be obliterated / vaporized. 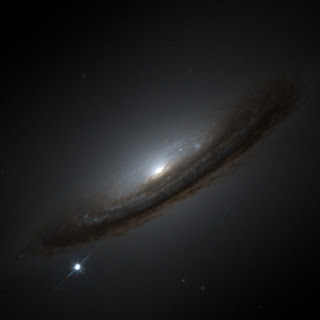 Consider that the supernova in its few hours or days outshines / out-generates in energy an entire galaxy.

On a related Christmas caroling note ... 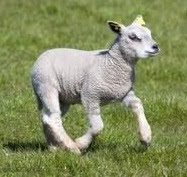 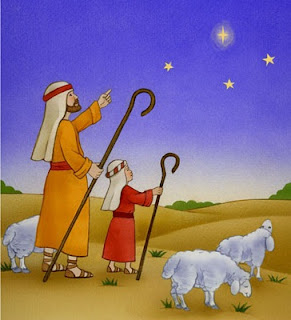 Ringing through the sky, shepherd boy, 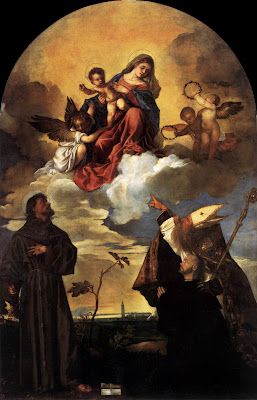 
As you may nor may not know, I have had (on my old Arcturus blog) written my own version of The Star, and I may do so in an upcoming entry before Christmas (just 1 week away).
Anyway, that's all for now. It's Saturday and I think I'll go to Nellie's. My next planned update will be on Monday or Tuesday.
--Regulus
Posted by Regulus at 11:16 PM

Thanks for this! really helpful stuff