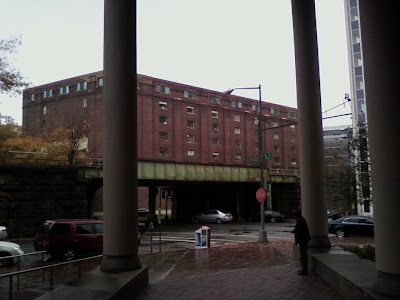 The view from the office building at 400 Virginia Ave., SW, Washington, D.C., on a wet autumn afternoon looking at the corner of Virginia Ave. and 4th Street, SW, 1:37PM, Nov. 16, 2011.
The CSX/Amtrak/VRE train line runs above 4th St. and parallels Virginia Ave., SW. I'm actually not sure what is that old brick building.
I used to work at 400 Virginia Ave., SW, back in 2002 when I was employed at the U.S. CLIVAR Office. Things were a lot better for me then, and when I go to this building maybe once every one to two months to the Atrium deli for lunch, it is like a sad trip back in time.
####### 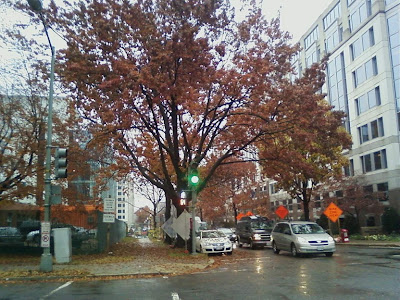 
Alright, this is the full entry I planned to post yesterday (Wednesday). It is a partial rewrite of that entry.
From yesterday ... 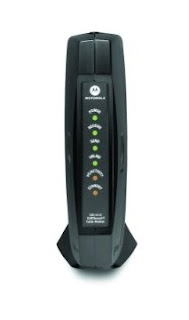 My internet connectivity issues seem to be resolved. Apparently, I just had to disconnect and then reconnect the coaxial cable into the router (or rather, that thing that splits the incoming wire into one coaxial cable for internet access and another for cable TV) because the wire itself wasn't properly connected.

How amazing is it that all so much information including images gravels through something so tiny.

I have been very depressed and despondent following a "happy hour" with two co-worker friends at the National Press Club last night. (I guess I'm feeling better on this Thursday.) 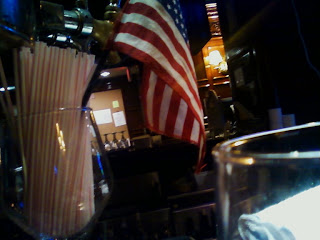 It was there that in I was shocked into the full realization that the company for which I work may not survive in any recognizable form much sooner than I thought, in particular, not much beyond late spring (although I have since been told by others whose opinions I respect that it will more likely be about a year or so).


Anyway, long story short, it is probably best that I start looking for new employment and I'm dreading this process. If this job ended abruptly now, I'd be in dire straits almost immediately.
#######


It was rainy yesterday, in particular last night with about 1/2" falling area wide with 0.54" at DCA plus another 0.01" today, although a very brief period of sleet pinging off my window a/c woke me up in the wee hours around 4:30AM. Yes, I had my window a/c on along with my box fan. 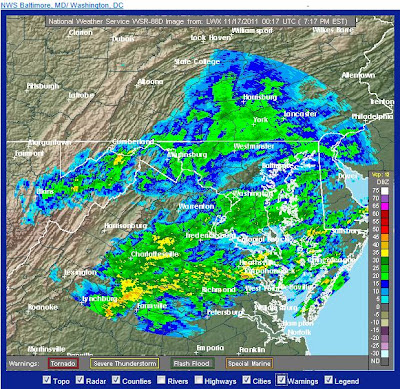 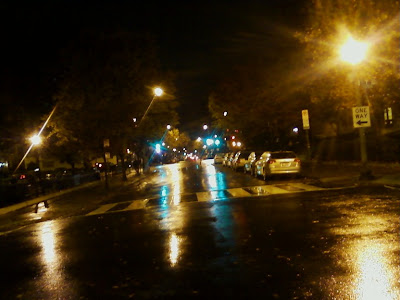 And here was the view looking south down 17th Street from T Street, NW, on the showery-wet fall evening, Washington, D.C., 8:41PM, Nov. 16, 2011.
If you look really carefully, you will see Mr. Sirius and his capo, Oooza the Unloved, at their usual place doing what they usually do. There was some sort of head-shaving contest there for an ostensibly very worthy cause there the other night that raised, oh, never mind ... 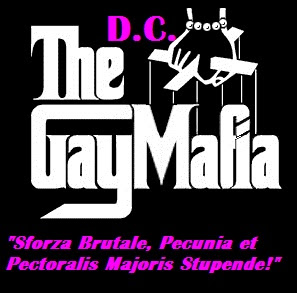 
The reason I took that above picture is because I was walking over to Larry's Lounge, where I met Kristof and his uncle, who is visiting from Poland. He is actually in the U.S. to visit his daughter who lives in Pittsburgh (she is Kristof's first cousin), but he came to D.C. to see his nephew (Kristof). He speaks only Polish but Kristof by the end of the night was doing a good job -- as Mike G. always does in going between English and Russian -- of rapidly translating an in-depth conversation. His uncle is 72 and was born in Poland during World War II and came of age in the 1950s, which if you think about it, is quite an amazing thought, so different a world as that was from Washington, D.C., 2011.
I should see them again tonight at LL with Damon. 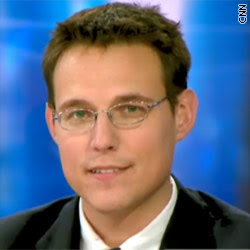 Salon's political analyst and reporter Steve Kornacki wrote a very interesting piece about his difficulty coming out as gay. Kornacki has previously written about how he was terrified at age 13 about the end of the world resulting from a previous Harold Camping Doomsday prediction.


Kornacki is from a suburban middle class family in the outer suburbs of Boston (Groton, Mass.) and was not raised as a religio-crazy fundie, just a garden variety Catholic. I guess in some ways, he is how a very successful version of me would have turn out. 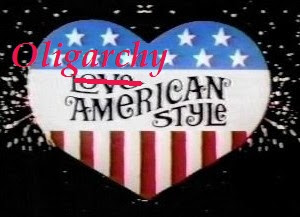 Paul Krugman's New York Times hosted blog should be required daily reading, as should his Monday and Friday regular columns (also available online) with the most recent Monday one.


That one is about Romney's bogus plan to partially "privatize" the Veterans Health Administration with another GOP bullshit voucher scheme, which itself is actually intended to fail and which, like all Republican "policy proposals" these days, is meant to increase the power and money of the oligarchical overclass while annihilating the working class.
####### 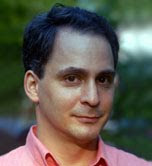 This deserves its own section ...


"Malignant Lunacy" (no, not my situation with Mr. Sirius, though I suppose ...) 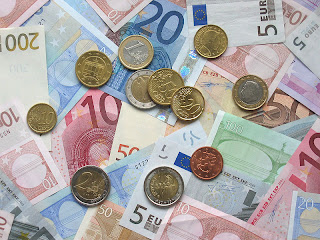 "The current policy of lending plus austerity will lead to social unrest ... And one should not forget that of the four countries we are talking about, all have had civil wars, fascist dictatorships and revolutions. That is history ... And that is the future if this malignant lunacy of monetary union is pursued and crushes these countries into the ground" (emphasis added).


-- Bernard Connolly at a Milken Institute conference in Los Angeles, May 2011, speaking about the situation confronting Greece, Italy, Portugal, and Spain in their euro straitjacket. The article states that his voice rose "above the chortles and gasps coming from the audience and the Europeans on his panel."
####### 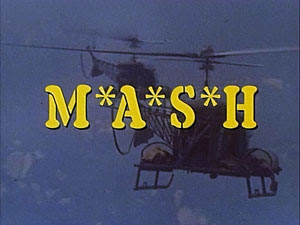 Earlier tonight when I first wrote this entry, I was home watching M*A*S*H on TV Land.

For some reason, I have started all of a sudden really enjoying this TV show, in particular the early seasons with Henry Blake and Trapper figures. The episode "Crisis" shown last night and again tonight was quite funny. 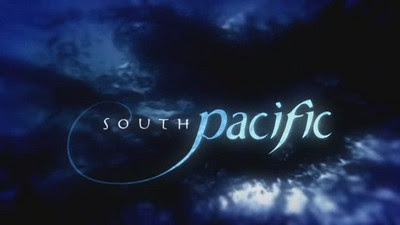 Meanwhile, Planet Green -- part of the Discovery Channel empire -- is re-airing the incredible six-part 2009 BBC nature series South Pacific that was repackaged in the U.S. as Wild Pacific with the episodes re-partitioned to some extent and re-labeled. This series is on part with the Planet Earth series 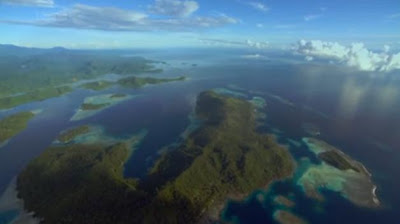 Aerial view of the Solomon Islands shows powerful beauty.
I've written about this before -- but, alas, I cannot link to the same YouTube clip because it has been removed -- in the context of a particular Polynesian tune of some sort that runs throughout the series but whose name I cannot determine, not even from the David Mitcham website to the series (he is the one who produced the music). 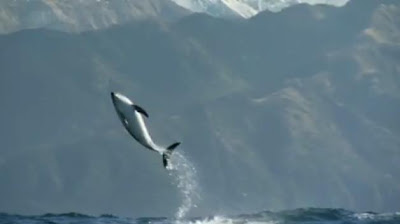 A dusky dolphin appears to leap just for the sheer joy of it in the frigid but bountiful waters off Kaikoura on New Zealand's South Island with the snow-capped Southern Alps in the background.
The above image is taken from my favorite scene in the whole series that is in the episode "Endless Blue" (the Wild Pacific episode "Eat or Be Eaten"). Thousands of such hyper-acrobatic dusky dolphins do this dance in the waters off Kaikoura.
Here is a brief clip of the episode Endless Blue featuring the music and some of scenes I was mentioning.
UPDATED 5:00PM: I had an email exchange with David Mitcham and it turns out the song is called Mooki ana Low Hey (not sure what that means) and was sung by Norma Winstone. I found a YouTube excerpt of it set to some narration by Benedict Cumberbatch, who did the narration of the "South Pacific" series, about New Zealand. Unfortunately, there is only a still image.
Also, I think the British narration by Benedict Cumberbatch was much better than the U.S. narration by Discovery Channel TV personality Mike Rowe. It's not even close.
#######


Oh, yes, here is an interesting site I found on what the world would look like if ALL the polar ice caps -- including the entire Antarctic ice cap. (Well, the site itself is a sort of global warming denying one, but the images are worth viewing.)
Here is what the Lower 48 U.S. would look like with the resulting approx. 66 meter (200 foot) rise in sea level: 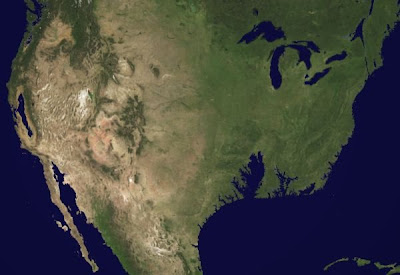 And here is a close up on the mid-Atlantic region ... 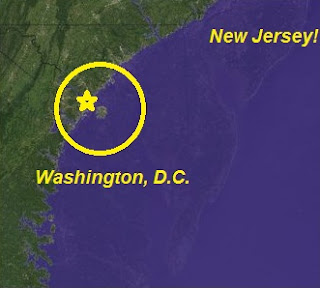 If you look carefully, you can see that D.C. would be ON the shoreline -- upper Northwest would be the coastline, although there would also be an island that today is the area around Suitland, Md., and the Congress Heights / Naylor Rd. section of Southeast D.C.

Jamie and I opted to call this hypothetical place "Drive-By Island." I've so noted it.


Oh, yes, and most amazingly, with all its trillions of metric tons of entombing ice removed, Antarctica would look (something) like this: 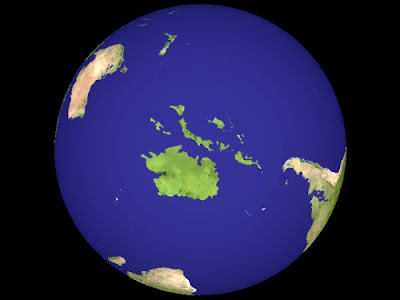 Antarctica without its ice cap.
Of course, with so much more water and such a warmer climate that this would require, the Earth might very well be as it was at times during the Cretaceous -- practially pole-to-pole torrid tropical rain forests.
#######


OK, that's all for now. My next planned update will be over the weekend . I owe Mike G. an entry in which I feature the pics from his trip to Roatan, Honduras and the Yucatan.
--Regulus
Posted by Regulus at 9:55 PM