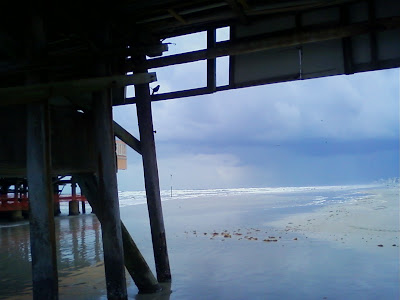 
So I have the opportunity to update this blog once more while in Daytona Beach from a computer room in the hotel where I am staying.
Tonight, (and courtesy my mom), I am in the Daytona Beach Hilton Hotel for one night, having had to vacate the Daytona Beach Regency earlier today (I overslept, of course, and the front desk called to wake me up) because there was no room available tonight. Actually, the other hotel was more "beach friendly" than this one for reasons that are too complicated to go into right now. 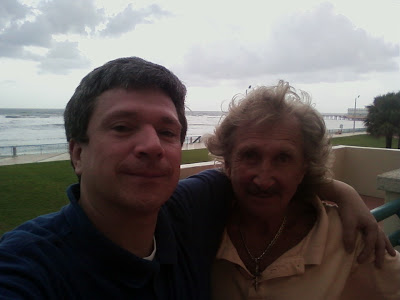 Yours Truly (left) and his (my) dad, Daytona Beach Hilton outdoor deck with the Atlantic Ocean and beach in the background on a showery evening, Daytona Beach, Fla., 5:47PM, Oct. 7, 2011. (My mom actually requested that I take a picture of my dad and me.)
#######


My dad -- yes, all is fine, and the utterly crazy woman is not around -- is staying in here with me tonight. We had another nice dinner at the Bubba Gump place in the Ocean Walk Shoppes area, located next to this hotel. I was never really angry at him. 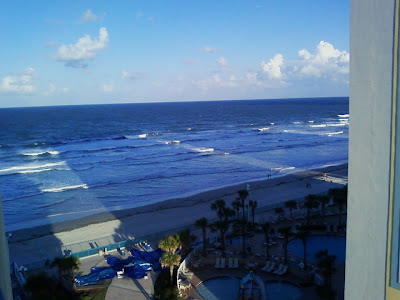 
In general, things are fine, although there is an issue with the train tomorrow (see discussion below). In addition, the weather is not fully cooperating in that there have been squally showers with intermittent bursts of sunshine. 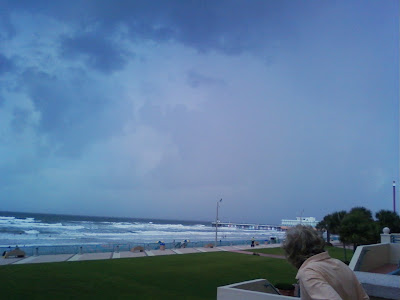 
I am not going to go into a detailed weather discussion, but long story short, a tight pressure gradient with an onshore flow from the ocean has set up over Florida as a result of the high pressure over mid-Atlantic / New England region (with endless sunshine). There is also an old frontal boundary and an upper level low swinging in from the southwest (currently near the Florida Keys). 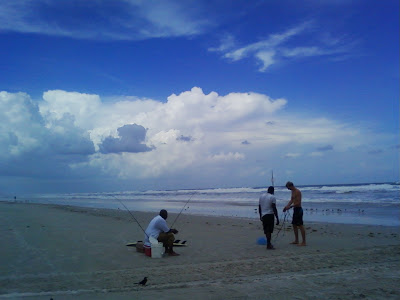 Three fishermen (in an interesting socio-cultural/age/racial mix), on the north side of the Daytona Beach Pier on a gusty, cloudy, intermittently showery day, Daytona Beach, Fla., 1:35PM, Oct. 7, 2011.
#######


There may actually be a coastal low of some sort along the Atlantic coast of South Florida with lots of rain / thunderstorms over the weekend. The low may then move northward, although whether its affects the D.C. area is unclear.
Today featured mostly cloudy, gusty conditions in the morning and early afternoon followed by a period of very warm sunshine (temps around 83F for highs), followed in turn by squally showers in the early evening. 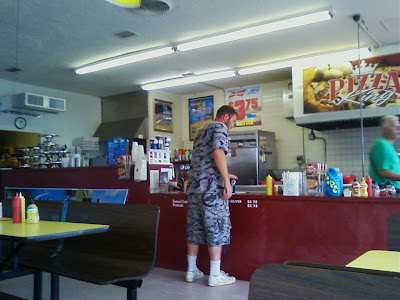 
I am SUPPOSED to leave for South Florida tomorrow, but the Amtrak train that I was scheduled to take through Deland at 11:45AM was having issues even before its scheduled departure from New York City tonight. However, Amtrak's automated system (THANK YOU, JULIE) kindly left me a message indicating there was a possibly significant delay, and long story short, I rescheduled my departure for the scheduled 9:07AM through Deland arriving in Deerfield Beach around 5PM. 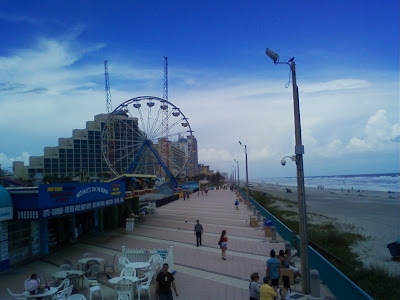 
The issue here is that only two trains a day heading south to the Ft. Lauderdale / Miami area pass through Deland and if the scheduled 11:45AM is canceled, I would be stuck for another nearly 24 hours. 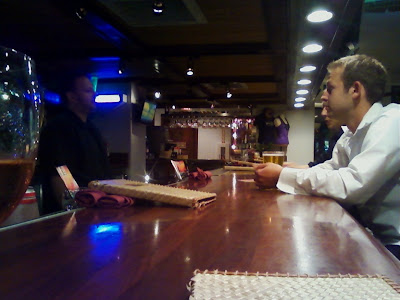 Two young 20-something fellows from (Coon Rapids,) Minnesota in Florida on a business conference (the one in the white seeing for the first time ever the ocean) and the bartender N. at Mai Tai (who stood me up tonight for an informal meeting at the "Sports Legends" bar here in the hotel, but I kinda expected that and don't really care), Daytona Beach, Fla., 8:03PM, Oct. 6, 2011.
#######


Anyway, the sticking point in this is whether the "Amtrak shuttle" from Daytona Beach to the Deland station (about 30 miles or so) could take me in time for the earlier train. The "shuttle" is a taxi with a company called Southern Komfort (yes, with a "K"). Amtrak could not make the adjustment itself given its kcontract with Southern Komfort, but I was able to arrange it (at least I think so). 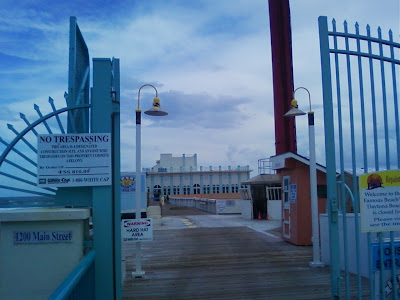 The Daytona Beach Pier under construction, 1:13PM, Oct. 7, 2011.
By the way, there is a strange and highly dangerous looking ride next to the pier called the Sling Shot that I would not ride in a million years. I'm actually surprised that something like that is allowed to remain operational.
#######


So if all goes well, I will get a taxi from the Daytona Beach Hilton at 7:45AM to Deland and be in Deerfield Beach for part 2 of this vacation by 5PM tomorrow. 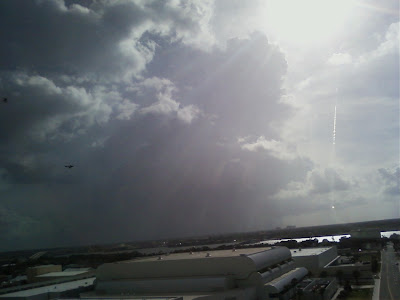 
OK, that is all for now. My next planned update will either be while in South Florida, or it will be when I get back. Gary and LP are flying down to Fort Lauderdale tomorrow. LP is staying in a hotel in Deerfield Beach while Gary and I stay overnight in M's condo in Boca (in best Fran Fine voice: "BOCA!") Raton (and we will spend the day in Deerfield Beach at the beach beside the ocean). 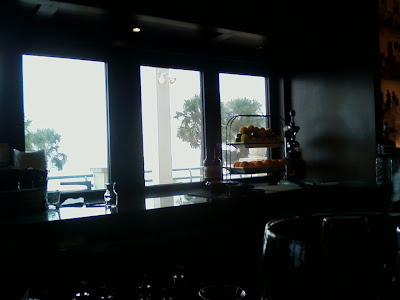 The view from the interior of the Hyde Park Prime Steakhouse looking out toward the ocean on a squally showery evening, Daytona Beach Hilton, 4:52PM, Oct. 7, 2011.
#######


Oh, yes, I got the $100 back from the Daytona Beach Regency -- I gave them a cash deposit and the security person inspected the room before I checked out (I had to wait in the lobby while that happened). There is no extra deposit in this hotel. 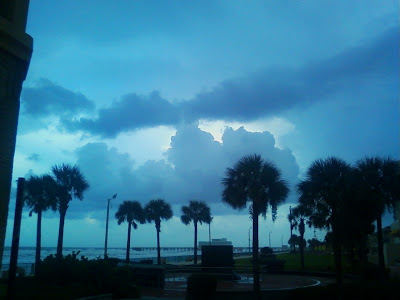 Daytona Beach on a stormy evening along the boardwalk with several of the ubiquitous sabal palm (Florida's state tree) silhoutted on the dusky gloomy sky, 5:50PM, Oct. 7, 2011.


Lastly, Daytona Beach is a strange place: half (rightwing) white-trash Americana centered on "biker week" and NASCAR racing, and half-opulent (at least in the hotels). Actually, it is mostly the former, but some of the hotels are upscale (including this one). 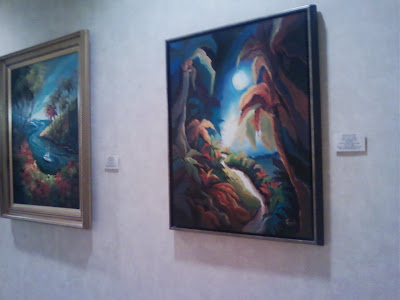 Two tropical paintings suggesting Paul Gauguin by a local artist named, I think, Raymond Joseph that are presently lining the corridor of the Daytona Beach Hilton between the "north" and "south" towers, 7:25PM, Oct. 7, 2011.
#######