NOTE: This entry was revised at 12:45AM 11/25/2011 to correct borough location of Rockaway Point.
SECOND UPDATE 1:52 p.m. 12/20/2020: This entry has proved one of the more popular ones of the ~3,050-to-date entries I've written. However, many of the font colors I used in the original post 9 year ago (!) were dark and distracting. Additionally, there was content that needed to be stated more clearly; an unrelated matter that should not have been in here; and a section on the Church of St. Joachim and St. Anne on Staten Island that needed revision. For those reasons, I have thoroughly reworked this posting.
THIRD UPDATE 3:53 p.m. 12/25/2021: I'm updating this entry again to post additional information with a more accurate map involving the Wakefield section of The Bronx. 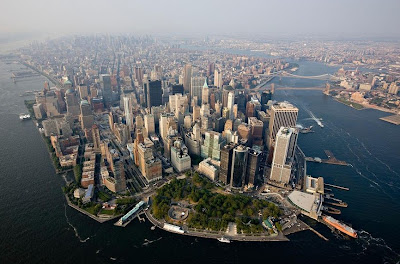 Aerial view looking north over Lower Manhattan's Financial District and toward Midtown. This is one of the iconic pictures of New York City -- the de facto Capital of early 21st Century human civilization.
*******


This entry is a "geographical extremities" dedicated one that takes a look at New York City's northern, eastern, southern, and westernmost geographical points. The images are taken from Bing aerial map views since (unlike on Google) the boundaries are dashed in and appear to be reasonably accurate. 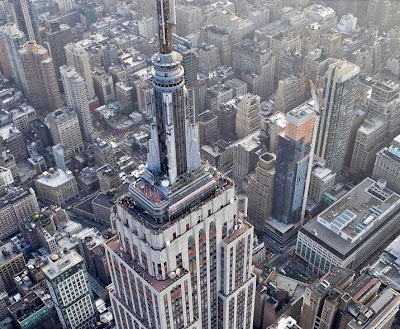 Another iconic images of New York City showing the top of the Empire State Building on July 7, 2010
*******


As personal context, I grew up in New Jersey on the upper Jersey shore (Long Branch / Sea Bright) and have always felt a connection to New York City, if only because you could see its massive skyline on a clear day about 30 miles due north. 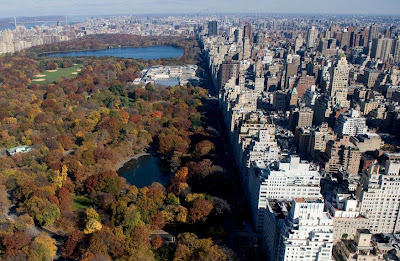 And still one more great New York City image -- an aerial view looking north showing Central Park on a lovely fall day, November 11, 2008. This aerial image along with the ones above were taken from this Denver Post site.
*******


So, let's consider the northernmost, easternmost, southernmost, and westernmost geographical points of the five boroughs that make up New York City. 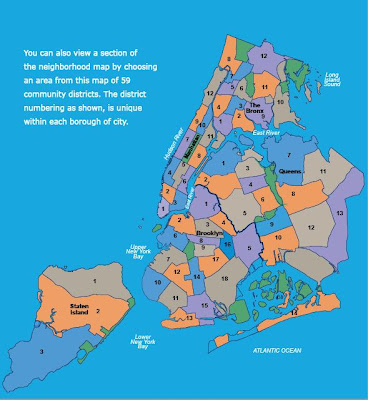 Full map of New York City's 59 recognized neighborhood, each individually numbered by the five boroughs / counties that make up the city. The "zoom in - able" PDF version of the map from the New York City Department of City Planning is available here. Click on the "view the full map" PDF link in the top banner.
*******


The honor of containing the northernmost point in New York City goes to Riverdale or (as shown on the map) North Riverdale with Wakefield having runner up honorable mention thanks to a weird "filament" of the city that stretches northward -- perhaps (and I'm just guessing here) because of a subway or train line / station. Both are in the Borough of The Bronx (Bronx County). (North) Riverdale is an upscale community while Wakefield is a working class one. 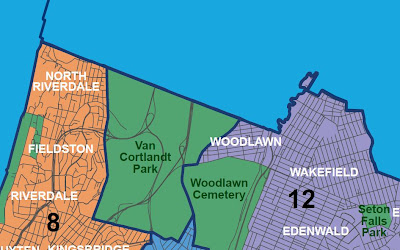 New York City's northernmost geographical point is actually in the Hudson River, but on land it is where the College of Mount Saint Vincent meets the river. The Hudson or Metro-North Railroad bisects it along the river. Amtrak also uses this line.
******* 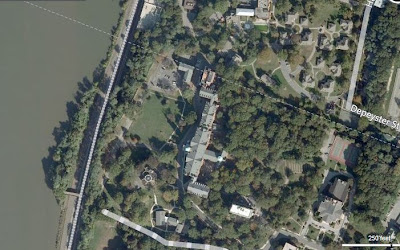 Aerial view of part of the College of Mount St. Vincent with the boundary of The Bronx and Yonkers.
The tennis court in this image is certainly the northernmost one in New York City, and the cars on that loop outside of Founders Hall and Rosary Hall (Sisters of Charity). 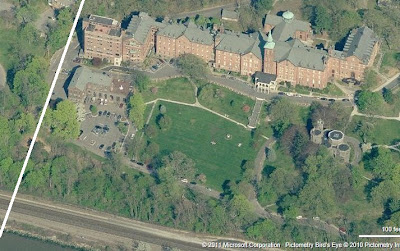 Bing "bird's eye" view of Founders Hall that shows (white line) approximately where the NYC - Westchester County boundary runs. The geographic northernmost point on land is (about) where the line intersects the river.
Make sense?


*******
As noted above, the Wakefield neighborhood a bit to the east/southeast is not as far north geographically as the above point. However, it is still quite far north with the Wakefield subway station the northernmost one on the Metro-North Harlem Line.
I think it reaches up just beyond what I believe is the highest number (slightly diagonal) east-west numbered street from Manhattan, E 242 Street. Perhaps the reason for this curious "filament" of the city is due to that aforementioned rail line and related properties. 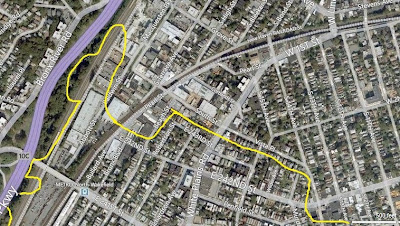 Bing aerial view of the Wakefield section of the Bronx with the boundary between it and Yonkers crudely drawn in (it would help if I had Photoshop instead of Paint). This northern point is not as far north as the one in Riverdale.
*******
Updated 3:53 p.m. 12/25/2021:
I'm not happy with how ill-defined is the above image with my attempt at drawing what I estimated to be the boundary of The Bronx. In trying to get a better boundary, I found this website: NYC Open Data that contains a highly detailed zoomable map of the borough boundaries of NYC here and shown directly below (at maximum zoom out): 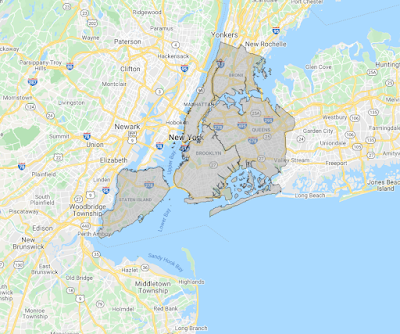 In so doing, I think I'm able to get a much better sense of that "filament" of The Bronx that extends north/northeastward along a street called S Macquesten Parkway.
So, let's begin a zoom in -- with the boundaries shown staying fixed, i.e., being invariant to scale. 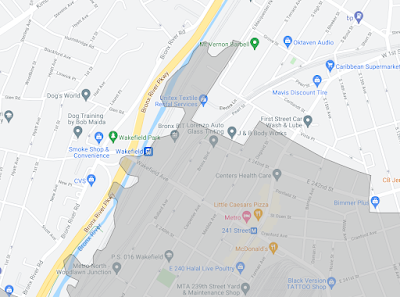 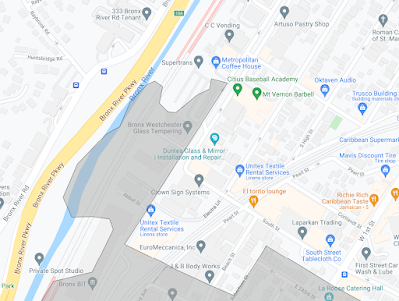 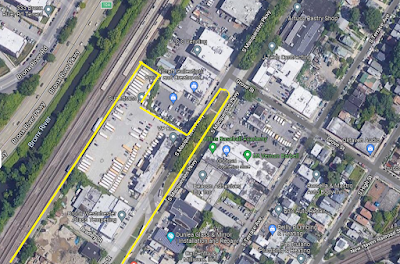 Above: A Google aerial map (satellite view) with yellow lines drawn in that I THINK represent the northernmost (or north-northeasternmost) extent of that filament. I could be wrong -- this is just my best estimate.
I straightened out the boundaries and made them go around a parking lot since that seems a bit more logical. I also assume that S Macquesten Parkway not only marks the boundary but it runs down the middle of it rather. Again, that could be wrong. (It could also be the case that the City itself doesn't know.) 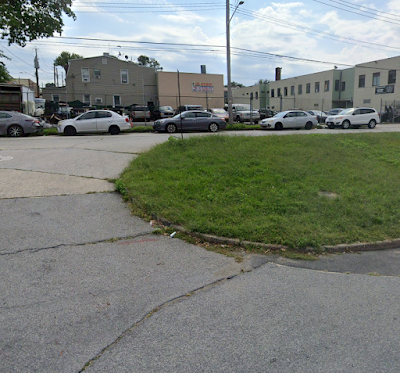 Above: Based on the previous assumption, this would be the very tip of the "filament" -- specifically, the rounded edge of the grassy median that runs along this stretch of S Macquesten Parkway.
End of Update.
*******
Easternmost point of New York City ... 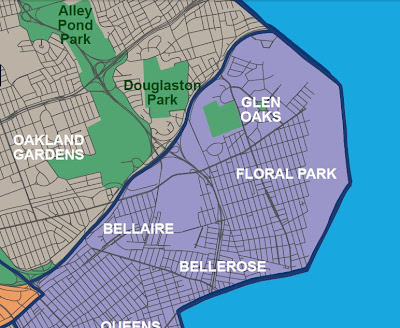 Map of Floral Park with only some of the streets shown
******* 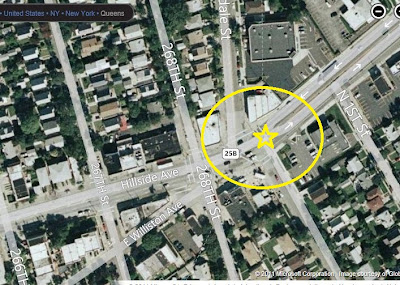 Bing aerial map showing (drawn in) what I believe is the easternmost point of the borough of Queens (Queens County), and hence of New York City. It is along Hillside Avenue just beyond 268th Street.
*******


OK, although it is well to the west of this easternmost point, the section of Queens called Glendale includes this well-known house: 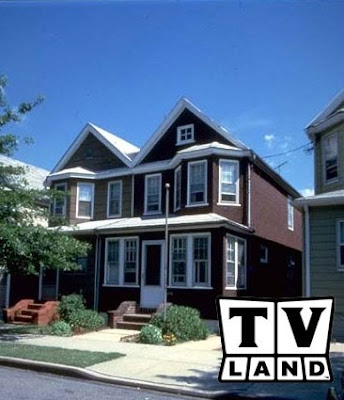 The (double) house at 89-70 Cooper Avenue (across the street from a large cemetery) that was featured in the opening sequence of All in the Family (although the Bunkers' house had a porch). That house was located at the wholly fictitious 704 Hauser Street. 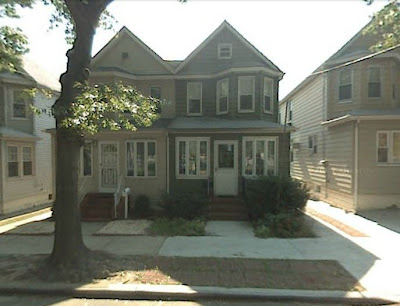 Google map street view of the house at 89-70 Cooper Avenue, Queens, New York City -- the All in the Family house -- except as it looks today. I guess it was painted a different color at some point.
******* 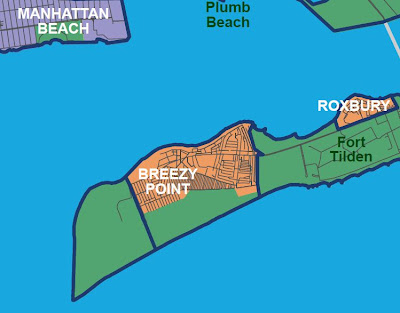 Map of the Breezy Point area just south of Coney Island. It is on the Rockaway Peninsula and is the southernmost tip of Queens, although it is not the southernmost point for all of New York City.

I *think* the actual southernmost point in Queens is called Rockaway Point, although I've also seen it listed as Breezy Point. (The city's community map does shown above does not specifically label it.)

As for Brooklyn, Coney Island includes that borough's southernmost point, but it is north of Rockaway Peninsula. 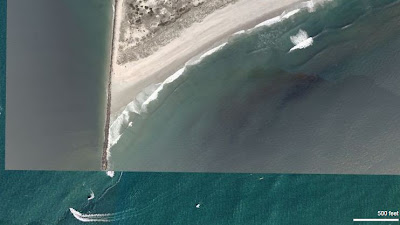 A close-up (Bing) aerial view of the tip of the Rockaway Peninsula, New York City
I am referring to the point itself as Rockaway Point although it may also be called Breezy Point. Also, yes, the image is split between two different photographs taken at different times. Regardless, it looks like an oddly serene albeit strangely located spot.
*******
Southernmost and Westernmost Points of New York City ...
New York's stepchild borough of Staten Island -- also known as Richmond County -- has the distinction of having both the southernmost and westernmost points of New York City. What's more, owing to the shape of Staten Island, they are within a mile or so of each other. Indeed, if the island were just slightly more pinch-point shaped on its southwestern side, the two points would coincident. 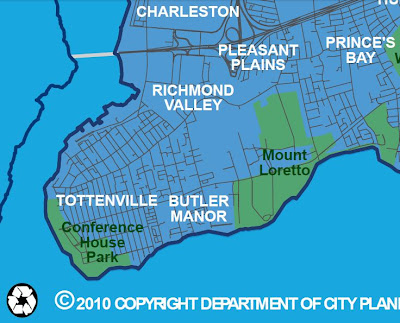 Map showing the Tottenville area of Staten Island where both southernmost and westernmost points are located.
******* 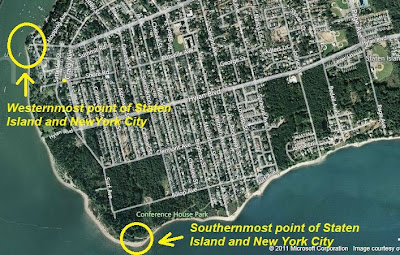 Aerial view of both locations referenced above
******* 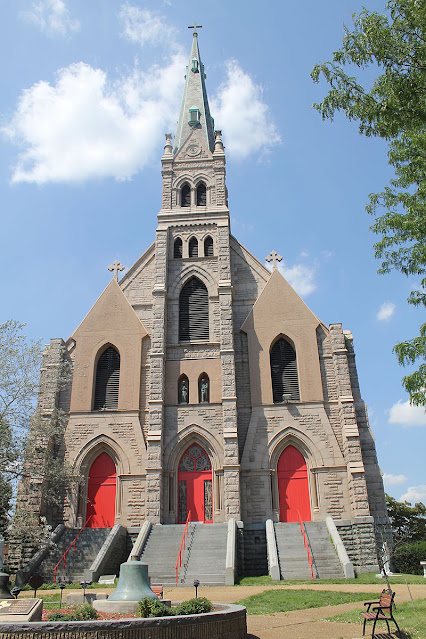 Old Church of St. Joachim and St. Anne, Staten Island, from August 2015; by Peter Greeberg, Wikipedia
*******
While I've never actually been to this church or even the "Mount Loretto Unique Area" nature preserve, as it is now known, this structure had a weird and haunting role in the my childhood. For you see, back in the 1970s into the early 1980s, including the period when I lived in Long Branch, New Jersey with my dad and paternal grandparents, I would visit my maternal grandmother in South Amboy, New Jersey.
And from her house on Henry Street near where it dead-ended on a high spot, and going up the two steep flights of steps to the main level of her house, you could see this church looming above the tree line on Staten Island -- itself visible across what is known as the Arthur Kill tidal strait that separates it from New Jersey.
For years, I looked at it but never was there. 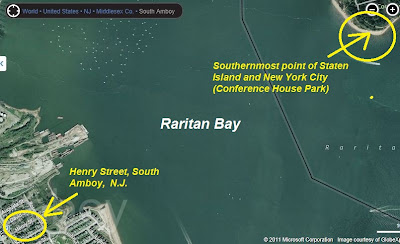 A map showing the southernmost tip of Staten Island in relation to South Amboy, New Jersey -- where my mom and uncle were raised (and my uncle still lives).
I've circled Henry Street which was (is) where their house was located, except it was actually a bit farther to the lower left (off the map), dead-ending on an old (discontinued?) freight train line and an embankment leading up to Rt. 35.
*******
Updated 1:52 p.m., 12/20/2020:Earlier content on the church removed except to note that the exterior was apparently used in the filming of the original 1972 movie The Godfather. 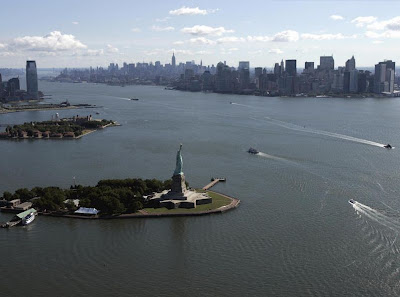 One last great iconic picture of New York City: The Statue of Liberty at the entrance to New York Harbor
*******


And with that, I will end this entry. My next planned update will be on Wednesday or Thursday.
--Regulus
Posted by Regulus at 1:14 AM