A Rainy Week Ahead, Stuart Fratkin (Cont'd), and Winters on the Bering and Chukchi Seas 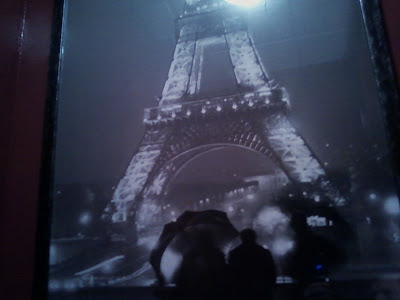 An interesting picture on the bathroom wall at Larry's Lounge of the base of the Eiffel Tower on a rainy night in Paris with umbrella-carrying figures silhouetted in the illuminated darkness of that City of Light (Washington, D.C., 1:32AM, Sept. 5, 2011).
####### 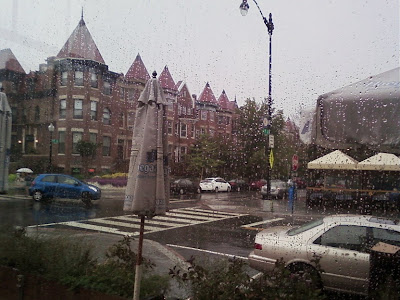 
This is just a quick update. It is late on Monday night, Sept. 5th and Labor Day 2011 and the end of a three-day holiday weekend that also marks the traditional "end of summer." Except in America, everything is dreadful and horrible, so I'm not celebrating anything, even the welcome end of a horrendously hot and humid summer. 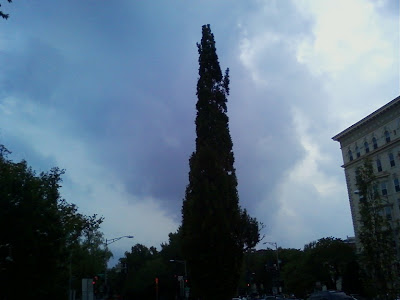 
However, we are in a very wet pattern right now as the remnant moisture from Tropical Storm Lee is shunted up the Appalachians and Eastern Seaboard along a stalled frontal boundary. A lot of rain is forecasted for the next 72 hours (the GFS has had 3 to 5 inches for our region in recent runs for the next 5 days).
Weather-permitting, Gary, LP, and I are supposed to go to the Jersey shore -- Wildwood Crest -- on Friday for a four-day vacation. Thus, it will be a shortened 3-day work week for me (unless I get fired and then it will be even a shorter one). 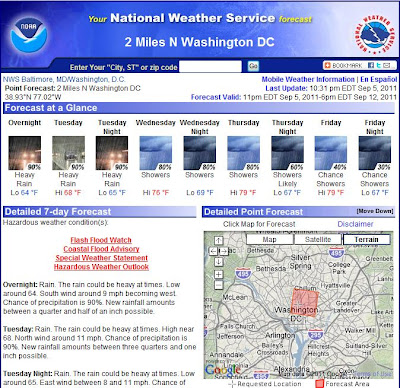 The five-day forecast for Washington, D.C., as shown on the Sterling LWX webpage (point and click forecast for the District of Columbia).
#######


The following is taken from the Baltimore/Washington NWS Forecast Office, i.e., Sterling (LWX), discussion issued at 9:36PM tonight. It was written in part by WOODY! and he managed to get his usual first-person pronoun "I" in his write up, but nevertheless it is worth posting in part. 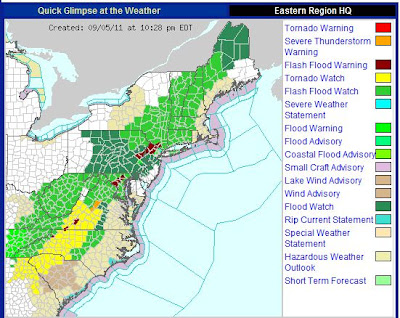 
A WEAK FRONT WILL REMAIN IN THE MID ATLANTIC REGION OVERNIGHT AND TUESDAY. DEEP MOISTURE...FROM THE REMNANTS OF TROPICAL STORM LEE...WILL INTERACT WITH THE STALLED BOUNDARY CAUSING A PROLONGED PERIOD OF RAIN THROUGH THE WEEK.
.NEAR TERM /TONIGHT/... 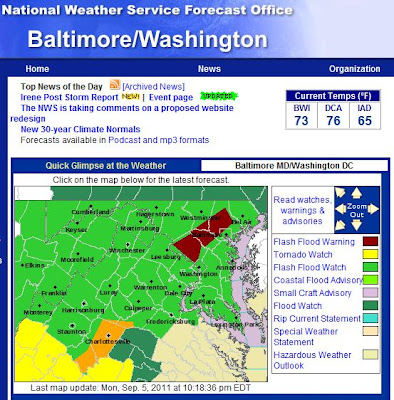 
MID AFTN SFC ANLYS SHOWED REMNANT OF LEE OVR SRN AL W/ A STATIONARY FNTL BNDRY XTDG FM THE BLUE RDG INTO VT. THIS IS PROVIDING A FOCUS FOR A WIDESPREAD MOISTURE PLUME FM THE GULF STATES INTO THE NE. 00Z IAD SNDG SHOWED A VERY TIGHT TEMP/DWPT CURVE ALL THE WAY TO 300 MB W/ PWAT OF 2.2". ALL OF THIS WL LEAD TO A VERY EFFICIENT RAIN PRODUCING ENVIRONMENT. 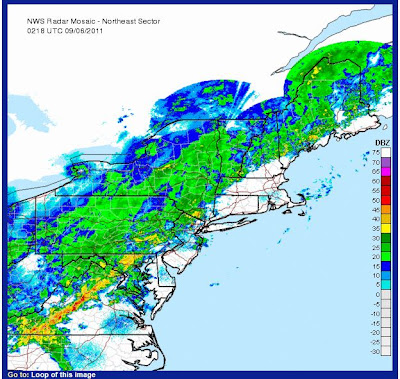 
THERE ARE SVRL PROBLEMS TO PONDER IN THE COMING DAYS - 1) ALTHO MAINSTEM RVRS ARE CURRENTLY LOW THE CURRENT FCST IS FOR 7-10" OF RAIN IN THE COMING DAYS SO LARGE RISES ARE XPCTD. 2) ERN PART OF THE AREA IS STILL QUITE WATERLOGGED FM THE IMPACTS OF IRENE LAST WK SO FLASH FLDG COULD OCCUR QUICKLY. 3) PTNL SPIN IN THE ATMOSPHERE; RNK HAS ISSUED SVRL TOR WRNGS ACROSS SRN VA. 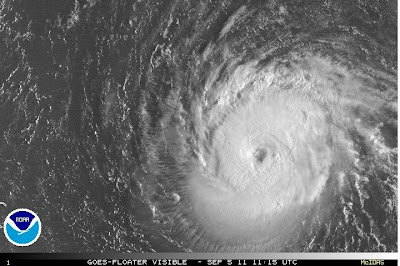 
WE'LL KEEP AN EYE ON THIS BUT IT MAY NOT BE UNTIL THE CENTER OF THE LOW DRAWS CLOSER TO THE AREA TMRW OR WED WHEN THE CHCS OF TOR WL BE BETTER. 4) LEE REMNANTS WON'T BE LVG THE AREA AFTR MIDWEEK IN PART DUE TO THE MVMNT OF KATIA OFF THE NC CST...WHICH MAY ACTUALLY CAUSE REMNANT LOW TO RETROGRADE AND KEEP MID ALTC RAINY (!) THRU THE END OF THE WORKWEEK. MY MEMORY BANK CAN'T RECALL A SITUATION LK THIS...IT COULD BE A LONG WK AHD FOR MANY. IF ONLY WE COULD GET SOME OF THIS RAIN TO TX TO QUELL THE WILDFIRES.
Editor's Note: What?? You mean that evolutionary throw-back Rick Perry's hotline direct prayers to GOD ON HIGH THROUGH CHRIST JESUS aren't helping?? 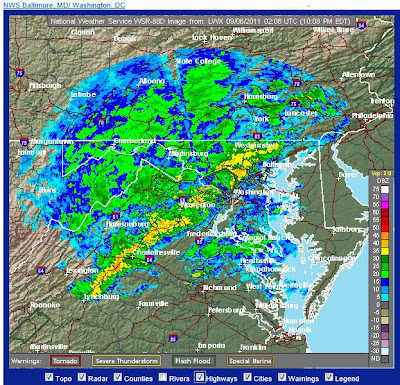 
ON AVERAGE...RAINFALL AMOUNTS OF 1 TO 3 INCHES EXPECTED ACROSS THE METRO AREAS THROUGH TUESDAY. WEST OF THE BLUE RIDGE...2 TO 4 INCHES ARE LIKELY. LOCALLY HIGHER AMOUNTS ARE POSSIBLE...DUE TO TRAINING STORMS AND/OR OROGRAPHIC FORCING.
In the end, the large upper level low over the Ohio River Valley will eject a series of shortwaves that will pick up Hurricane Katia, cause it to hook around Bermuda, and send it on an accelerating path across the North Atlantic Ocean.


So I have confirmation that that was indeed Stuart Fratkin who visited my blog last week, specifically, my Jan. 4, 2011 entry  "The Stuart Fratkin Show (20 Years Later) -OR- Arcturus Doesn't Live Here Anymore" . 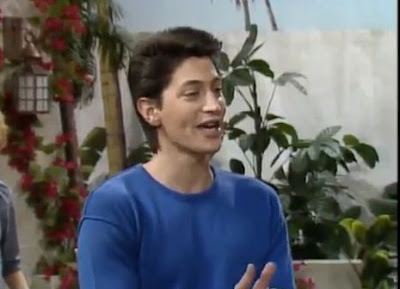 He then posted another comment today in reply to my reply. I am posting here the full exchange.
stiles2 said...
The 10K reference was meant to be a joke. Hence the quote, "After waking up". Sorry it was lost on you.
August 28, 2011 3:11 PM 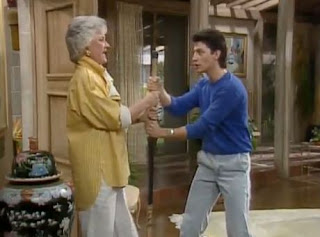 Regulus said...
If that's you, Mr. Fratkin, thank you for stopping by. (And sorry if I missed the ironical nature of your 2004 post.) I think this is about as close as I'll ever get to someone who actually met the four Golden Girls (since I'm not likely to meet Betty White and the others are gone). I posted mention of this in my current entry.
August 28, 2011 5:01 PM 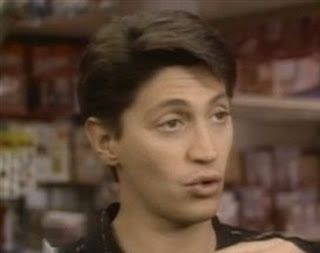 stiles2 said...
Yep. No problem. In actuality, it was a mind blowing experience. (Aside from the true Flo story) I remember sitting in the bleachers watching them rehearse and thinking, "I'm in the presence of greatness". I soaked up every last minute, especially working with Bea Arthur, which I believe to be one of the finest sit-com actress' ever next to Lucy. Her timing was impeccable.

P.S. A friend sent me this link with a "You need to see this" attached.


Mr. Sirius and Oooza the Unloved On Their Bering and Chukchi Seas Holiday
OK, I do not have time for a "geographic oddities and extremities" feature in this entry. However, I do want to repost a slightly revised version of the picture form my previous entry concerning Wales and the Cape Prince of Wales at the westernmost tip of the Seward Peninsula of Alaska. 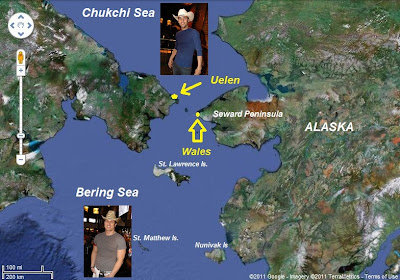 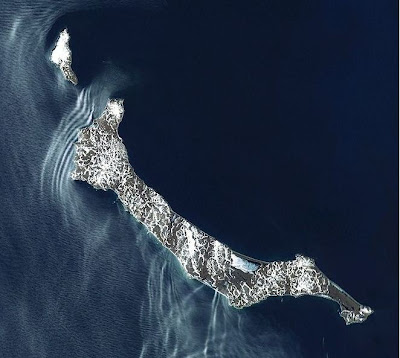 Satellite view of St. Matthew Island, Alaska, in the middle of a frigid expanse of the Bering Sea. Mr. Sirius stays on the northwestern side by the Glory of Russia Cape.
#######


They visit each other via the Bering Strait, occasionally meeting on Big and Little Diomede Islands.

And occasionally they meet up in Wales or even in Uelen. 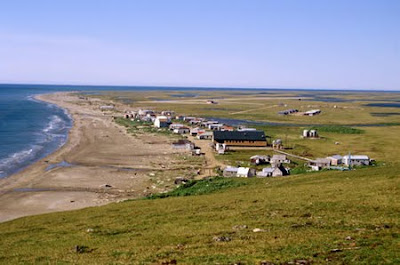 The village of Wales in the short Arctic summertime on the Bering Straits, Alaska.
####### 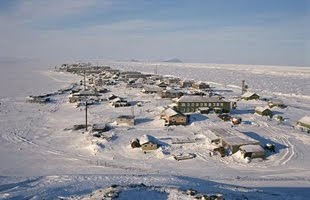 The village of Uelen, the easternmost settlement in Siberia and just 20 km from Cape Dezhnev.
#######


OK, that's all for now. My next planned update will be either tomorrow or Wednesday.
--Regulus
Posted by Regulus at 12:28 AM