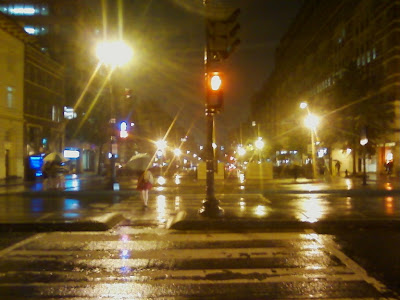 
Today has been a very rainy day. A veritable plume of tropical moisture -- associated with the remnant circulation of Tropical Storm Lee that is now a "vertically stacked" upper level low over the Ohio River Valley -- has been training tropical moisture up the I-95 corridor and across the Washington / Baltimore area. 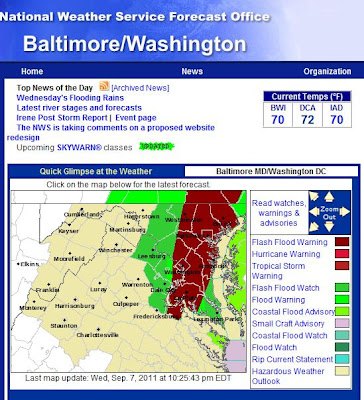 The Sterling LWX county warning area (CWA) map showing weather advisories including watches and warnings in effect as of 10:25PM EDT, Sept. 7, 2011.
A series of flash flood warnings have been in effect on an elongated south-north path that includes the western shore of the Chesapeake Bay and the entire Washington / Baltimore area.
####### 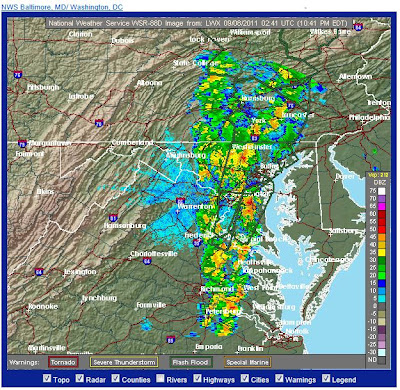 The Sterling (LWX) NWS radar in base mode reflectivity, 10:41PM, Sept. 7, 2011.
A tropical plume of moisture has been channeled up on a relatively narrow north-south path for about 12 hours now with occasional breaks. This path has actually centered right over the D.C. and Baltimore areas.
#######


Interestingly, most of the rest of the continental U.S. is dry. Furthermore, today's precipitation set-up was unusual -- more typically this is the kind of set up that gives Boston 5" or New York City 7" of rain while Washington, D.C., has partly cloudy conditions. 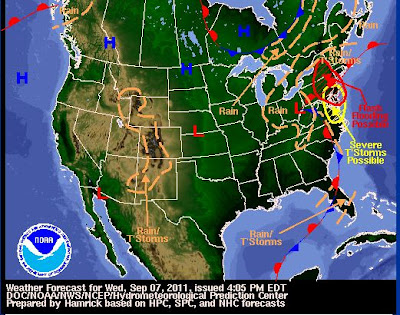 
Anyway, through 11PM, I estimate (using the preliminary climate summaries through 5PM and hourly summaries) that National Airport (DCA) is up to 2.67" for the day and BWI Airport is around 1.66" while Dulles (IAD) is around 1.00". However, other areas had substantially higher amounts -- apparently (according to Gary) Chester recorded 7.5" or so at his home in Howard County, Maryland. 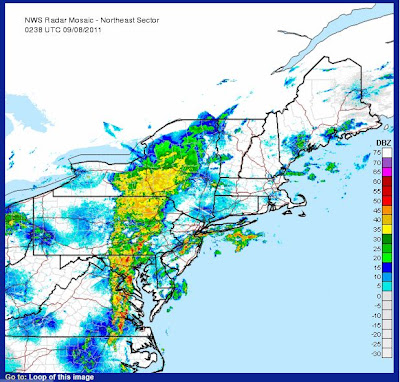 The radar mosaic of the northeastern continental United States at 0238 UTC (10:38PM EDT), Sept. 8 (7), 2011 showing the aforementioned plume of tropical moisture.
Oh, yes, Hurricane Katia is still out in the Atlantic centered about 325 miles WSW of Bermuda, but it is forecasted to make a sharp rightward turn and get picked up by the westerlies / ejecting shortwaves that will carry it to the Hebrides off Scotland by Monday night / Tuesday morning.

The National Hurricane Center's 5-day track for Hurricane Katia issued as part of advisory #40 at 11PM EDT, Sept. 7, 2011.
Katia will rapidly transition to an extra-tropical / baroclinic cyclone in the next 72 hours.
#######


And there is another system lurking way out there somewhere between in the vast expanse of tropical Atlantic Ocean between Cape Verde and Leeward Islands called Tropical Storm Maria, but it moving quite quickly (20+mph) toward the west.


Anyway, the three-day DCA total is now closing in on 5 inches and the yearly total is approximately 32.4" -- or 5" above normal and 10" above last year's year-to-date. I will have more exact numbers in a subsequent entry.
Sterling's WOODY! has likened this to the incredibly wet spell in June 2006. 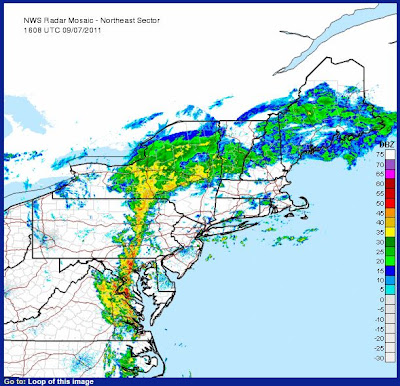 
I actually worked from home. This was initially because I went to Larry's Lounge last night where I met Kristof and had a very good time. I slept in late this morning and was going to go in two hours late, but it was raining so much that I did not want to chance walking with my work laptop to the Metro, even with it wrapped in a plastic bag inside my old dumb Census 2010 enumeration tote bag inside my book bag. My supervisor said I could work from home today and I did that -- from about 1230PM until 845PM (with a few breaks) as I finished one of the two detailed recommendation letters for the remaining 2 of the four compliance cases (still the Nebraska ones). 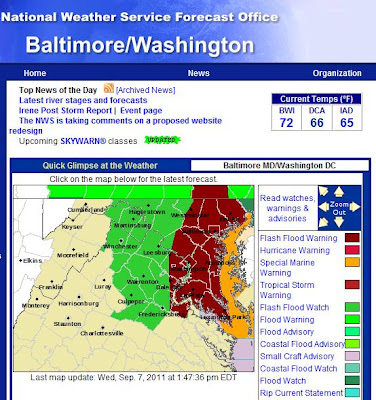 
I finally left the apartment around 9PM and took a walk to Larry's Lounge, but stayed only briefly, and then I walked to James Hoban where someone I know works. But I soon returned home.
On one of the TVs was WETA -26 (muted). It was NOTHING but horrific 9/11 imagery including people jumping / falling out of the upper falls of the Twin Towers of the World Trade Center. This is all part of the building frenzy of media coverage for the upcoming 10th "anniversary" of the 9/11/2001 attacks that the (altogether) 9/11 Inc. military - industrial - surveillance state - warmongering - corporate financial oligarchical overclass / media-whore complex will be providing the masses over the next week.
####### 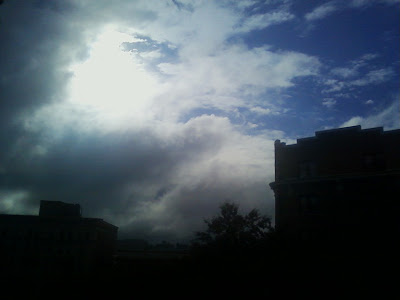 The tropical-like sky filled with fast-moving broken clouds (fracto-cumulus and/or shreds of nimbostratus over Washington, D.C., as seen from my apartment during a break in the rainfall late this afternoon, 5:06PM, Sept. 7, 2011.
#######


The delayed / planned trip to the Jersey shore to Wildwood Crest with Gary and LP appears to be off. There are a number of reasons why this September beach weekend is not the best idea including because of the iffy weather forecast for Friday - Sunday.
I can save the money for my two-part Florida trip next month that I will be talking about more in upcoming entries. 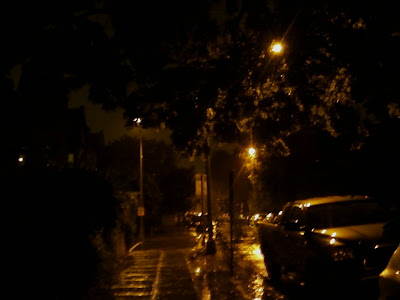 
This brings me to my second item -- I can also use the $300 or so I was going to spend to buy an air mattress (!). My actual mattress -- the one I have slept on for most of the last decade or more (I can't recall how old it is) -- finally "died" yesterday. That is, I had to throw it out. It was in bad condition with holes and the springs starting to stick through. 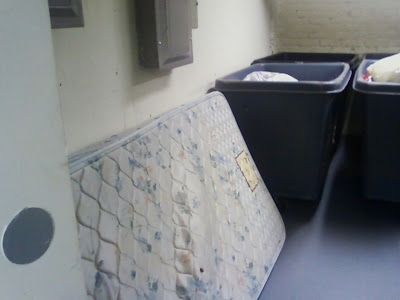 
Worse, though, there appears to be a flea or some other infestation in this building and I think my bed may be home to some of them. 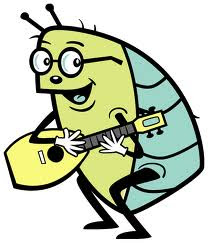 I've had a number of mosquito-like bites in the past few weeks, esp. on my ankles, calves, shins and lower arms, I keep having to use Cortizone cream. The rumors are that it is bed bugs but I think it is more likely fleas.

The exterminator is supposed to come to my unit on Friday. It was weirding me out and I had to throw it out, so I brought it down to the trash room where people regularly toss out furniture.


Anyway, eventually I need to buy a new twin-size mattress but even those cost $200 easily. Recall that my mattress is on the floor (I haven't had a bed in many years), and now it's just a big pile of quilts, blankets, pillows and stuffed animals on the floor. 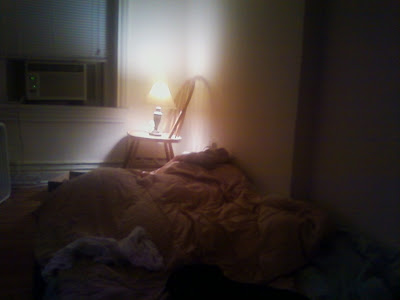 
What I really need are just a bunch more quilts, blankets, and pillows, not to mention another egg crate foam cushion. And plush hippos. As it is, I will just make my wee little efficiency look like the inside of Jeannie's bottle.
OK, that's all for now. My next planned update will be in a day or two.