In Sunlight and Shadow -OR- All in the American Family Way 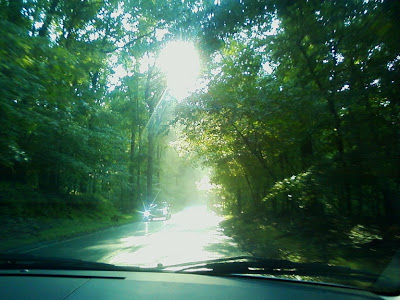 Sunlight shining and shadows on a mist-shrouded Glen Road in Potomac, Md., shortly after an afternoon thunderstorm, the cloaking trees looking unusually lush and green for the tail end of summer, 6:02PM, Sept. 11, 2011.
This picture and the one below were taken on my Sunday drive with LP that I mentioned in my previous entry.
#######

Well, I guess I better update this damn blog.


I've been extremely depressed the past several hours because I think I may be pulled off the main billable assignment that I have been working on since April. Why? Because I was a day late on one of these meticulously written, well footnoted, 12 to 16 page "letter" reports (with 16 to 24 attachments) that are part of the compliance resolution process. I was finishing up on the last of the three Nebraska compliance resolution cases I have been working on for about six weeks, but that I've now basically completed and I need additional ones. 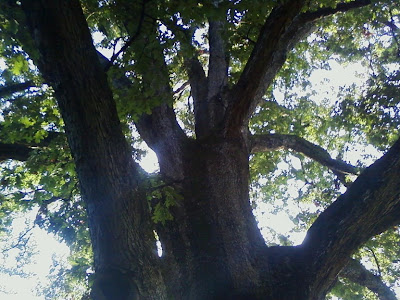 
Earlier this morning and early afternoon, I was in real agony following a (mostly) silent conniption, of sorts, en route to work. I'm not sure how long I can keep up my D.C. (or any?) life. 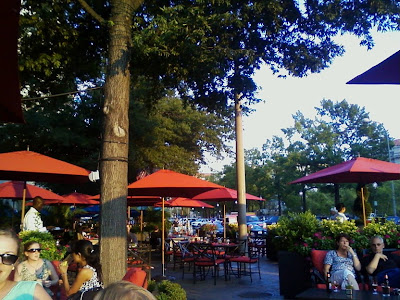 All in Whose Family?

I've been watching All in the Family reruns on TV Land this evening. 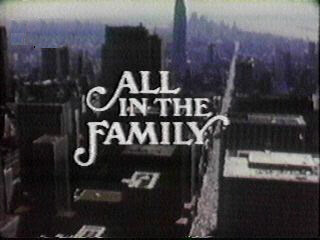 These episodes are part of a 4-parter (the first two were on yesterday) that were filled with the usual Norman Lear self-righteous agonies from that first half 1970s time capsule.


This set of four episodes are collectively referred to as "The Bunkers and Inflation," and it is about the Bunkers' struggles while his dock workers union on strike during the context of 1970s "stagflation." 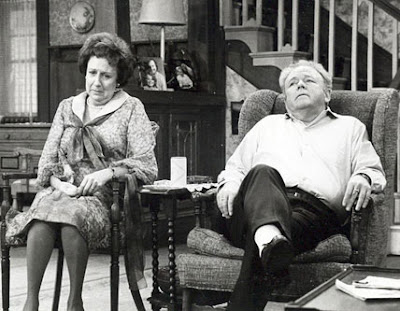 Today we have a different set of problems: A deleveraging shock / liquidity trap / quasi-depression economics with a brutal corporate oligarchical overclass waging a savage class warfare and their 19th Century-style Know Nothing Teabagger shock troops, further helped along by a whored-out corporate media-entertainment complex. 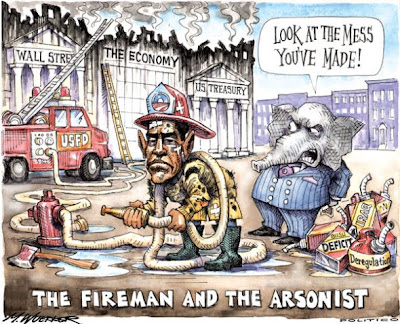 We desperately needed another FDR but instead we got Obama. What a profound historical disappointment -- in some ways worse than the 2000 rightwing Supreme Court coup called Bush v. Gore that gave us W. 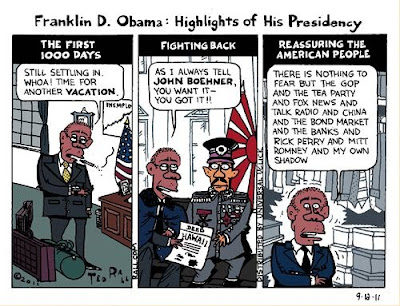 Meanwhile, the atavistic Know Nothing Teabaggers -- shock troops of the corporate oligarchical overclass -- and assorted "low information" voters can't STOP voting for the party, the group, that will ensure their own destruction. 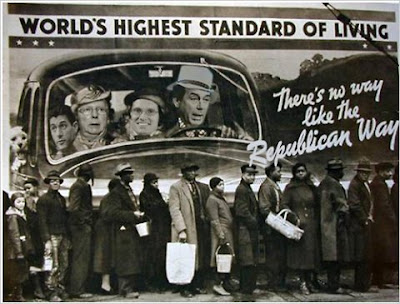 It's the American Way. Meanwhile, Jesus H. Obama just smiled and gave thanks to himself all day for the latest set of cave-ins.

Overall, it may all be summed up with a single phrase that perhaps the late, great Isaac Asimov would've appreciated:

Bubbles, War, and End of Empire


Speaking of which, I highly recommend Mike Davis' piece How America's Empire Will Be Remembered in Salon yesterday.
#######


Oh, yes, the reason I mentioned this All in the Family set of episodes is that in the third one, George Jefferson -- Sherman Hemsley himself -- uses the "N" word in an exchange with Louise Jefferson (Isabel Sanford). 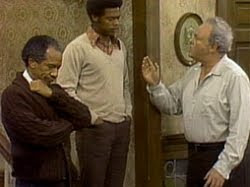 It was in reference to whether or not Edith (Archie's wife and their neighbor) could work in his dry cleaning store while Archie's union is on strike. (The Jeffersons went on to have a very successful spin-off show.)

I'm quite surprised this got through the filter whereby EVERY N. word reference in 1970s sitcoms has been removed. (Of course, living and gadding about D.C., it's pretty much the only word you hear in some quarters.)

Anyway, the line was to the effect: 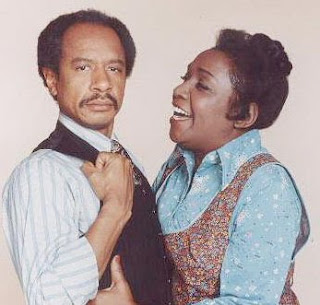 "WHAT ARE PEOPLE GOING TO THINK WHEN THEY SEE A WHITE WOMAN WORKIN' HERE?!? THE HONKIES ARE GONNA THINK SHE OWNS THE STORE AND THE N. ARE GONNA THINK WE BLEACHED THE HELP!" Ha ha


Sherman Hemsley, who is still alive but quite old at, may be gay in real life even if this was never obvious. In fact, his screaming, over-the-top personality and short stature reminded me of my dad.
####### 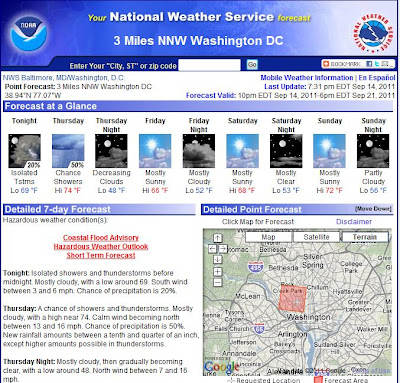 Forecast panel from the Sterling (LWX) NWS webpage valid from 14 - 18 Sept. 2011.
There is a broken cluster of thunderstorms west and northwest of the D.C. area this tonight ahead of a cold front that is forecast to usher in the first noticeably cooler air of the season. Today reached 87F at DCA and 88F at BWI and IAD, but by Friday high temps are forecast to be around 67F. 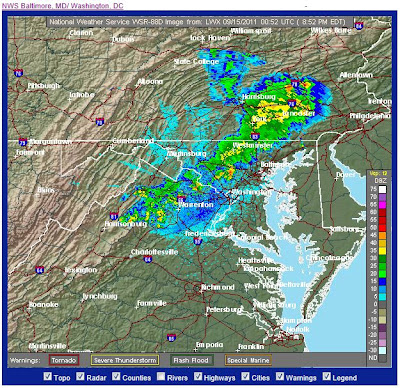 The LWX NWS radar in base mode reflectivity, 8:57PM, Sept. 14, 2011.
Even though we have had abundant rainfall this month, I hope we get some t-showers tonight, though at this point it doesn't look like we will.
#######


To return to my earlier frightfully bad mood this morning, part of it was fixated about the usual topic.

On an unrelated note, let me just say I think it's wrong to "earn" (mostly just be given outright) $200,000+ per year, likely fully two-thirds of which are from tips, and not declare any of it.


And it is all the more galling when the same situation involves some vicious arrogance and self-righteousness.
#######


Kristof is away at a science conference in Helsinki ("A SALES CONFERENCE IN BIRMINGHAM?!") until the 23rd and ChrisT started on his drive tonight to his new home in Montgomery, Alabama, where he will be working at a new job.
The friendship with Jamie is effectively over. I just want returned my copy of The Genesis Quest. 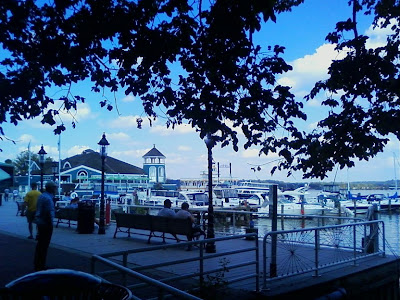 
OK, I was going to post a "geographical extremities" component to this entry, but the sleeping pill I took has begun to kick in and I want to be in bed / asleep by 1130PM so that I can get a full 8-1/2 hours of sleep.
My next planned update will be on Friday or Saturday.