This is a quick update re. the status of Hurricane Irene.
The hurricane is centered at 32.1N / 77.2W or 180miles SSW of Cape Lookout, North Carolina. The storm is moving north-northeastward (the rightward turn has begun, or at least this motion is forecasted to continue for two days). Top sustained winds have fallen to 100MPH and the central pressure has risen to 28.05" or 950MB. No further strengthening is expected, though it is not likely to weaken significantly. 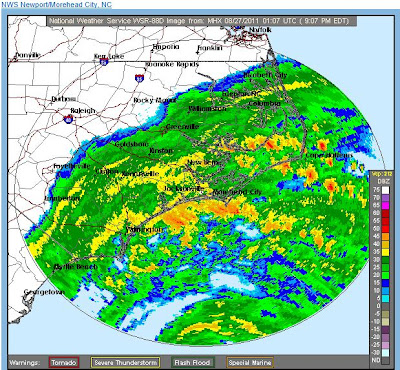 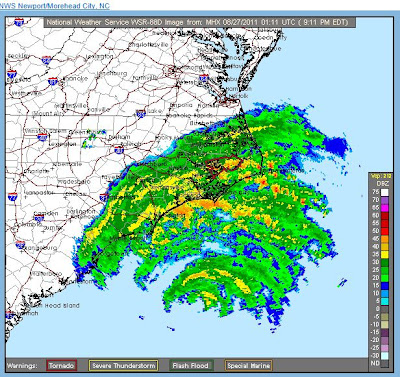 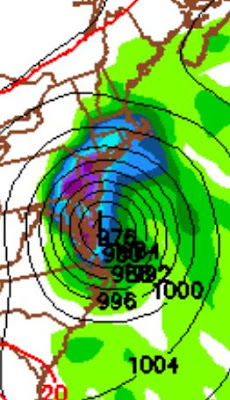 If this looks quite similar to the one I showed yesterday, it is because it IS -- the GFS has shown a good deal of consistency.

The 18Z (2PM EDT) runs of both the NAM and GFS as well as the 18Z runs of both tropical models -- the GHM and HWRF -- show a very similar path with center of the storm moving NNE on a path that brings Irene ashore right near Cape Lookout (which is about 60 miles WSW of Cape Hatteras) around 2PM EDT tomorrow (Saturday), right over the lower Tidewater (Norfolk / Newport News / Virginia Capes) area, and thence along or slightly off the Delmarva and New Jersey shore and ALMOST directly OVER New York City and into southern New England. 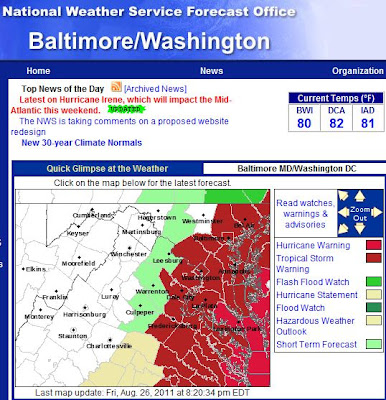 
While the center will pass about 80 to 120 miles east of D.C., the storm has a large circulation so rain bands are expected here in the Washington, D.C./Baltimore area. There are actually tropical storm warnings up along the upper half of the Chesapeake Bay AND the D.C./Baltimore area as well as surrounding counties. Meanwhile, a HURRICANE WARNING is in effect for the lower half of the Chesapeake Bay, much of the Delmarva, and even St. Mary's County, Md. (western shore). Squally rainy conditions with winds of 40 to 50MPH and higher gusts, as well as about 2 inches of rain are presently expected here in D.C. (but, of course, this subject to change). 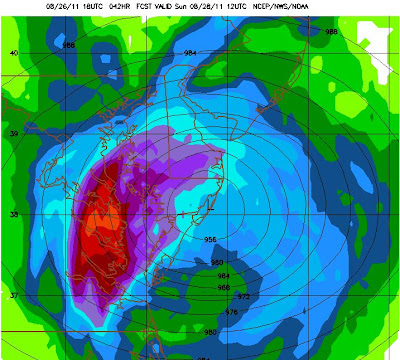 
The storm is not so intense that it is going to obliterate coastal New Jersey or New York City BUT it is strong and large enough with enough of a storm surge that it will likely cause widespread damage along the Jersey shore and heavy flooding in the lower parts of NYC (hence the large internal evacuation from low-lying parts of the five boroughs). 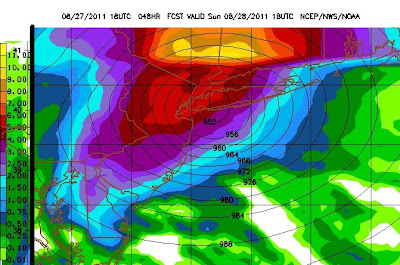 Here is the 18Z run of the Hurricane Weather Research Forecast (HWRF) model showing a (slightly adapted) nested-grid image of MSLP and 6 hour precipitation valid at hour 48 or 18UTC (6PM EDT) Aug. 28, 2011 with a DIRECT STRIKE on New York City.
Again, this scenario if realized would cause extensive flooding to low-lying parts of New York City. 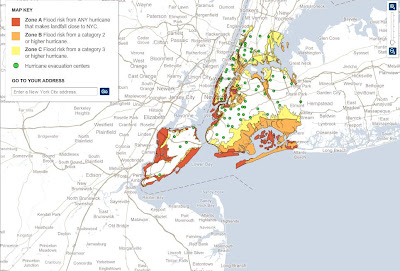 Here is the largest scale view of the New York City hurricane flooding evacuation map. The full interactive map is here capable of zooming in.
#######


By the way, I have NOT watched the Weather Channel once -- while informative (at least according to my dad), it is unwatchable if only because of the Jim Cantore hysteria. However, my friend Joe sent me a link to one of five videos on YouTube showing the early Weather Channel's coverage of Hurricane Gloria in 1985 (a storm I remember). The link to part 1 is here.
#######


OK, that's all for now. I'm meeting Gary at Larry's Lounge and maybe we will also go to Nellie's, which I understand is having a "hurricane party" weekend. Hm.
####### 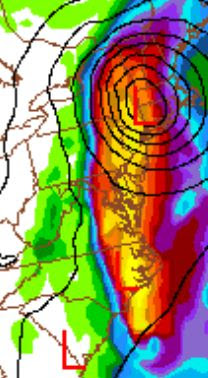 This run shows the same path for Hurricane Irene as the others. In addition, it produces 4 to 6 inches of rain in the D.C. area and 10+ inches in New York City and most of New Jersey as shown here in the 48 hour cumulative precipitation total and surface map valid 0Z 29 Aug 2011 (8PM EDT Aug. 28, 2011).

And with that, I really will end this entry.


My next planned update will be tomorrow as circumstances warrant.