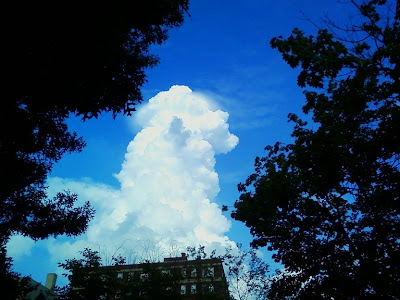 A narrow towering cumulus cloud developing into a cumulonimbus (thunderstorm) one a few miles away as seen from the edge of the 17th Street dog park, 5:24PM, Aug. 19, 2011. This was one of the storms that formed into the complex that deluged right over downtown D.C., the baseball stadium, AND the airport (officially and finally).
#######


OK, this is just a ended up not being a quick entry because even though it is already after 3PM in the afternoon and I am only now really getting up after a very needed 10 hours or so of sleep and I need to be somewhere by 6PM latest. This entry features the highlights of last night. 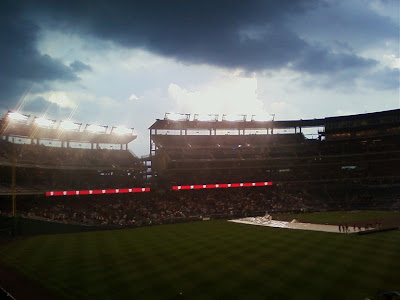 A review of the evening ... 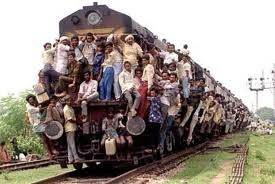 We rode a MOBBED cattle car of a Green Line from U Street / Cardozo to Navy Yard (a station not designed to handle that crush of humanity). I had earlier left work a bit early around 440PM to take my computer home -- HOPEFULLY to do some work. (I'm also worried I may get pulled of this project I like so much next week, but I'll talk about that some other time.)


The skies were very ominous as a thunderstorm complex formed literally overhead.
Gary and I were in the Porch Bar getting drunk before heading over to our seating area when the skies opened up in cataracts of rainfall and flashing lightning and crashing, booming, reverberating thunder. It was top of the 1st inning when this happened. 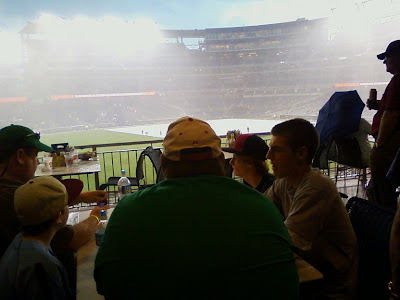 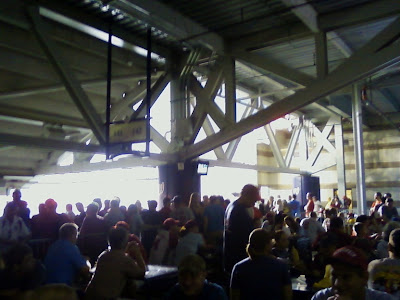 
There was a 90 minute rain delay and I thought the game cancelled. The outfield looked like a swampy lake. Gary and I walked around the stadium. The fans, especially the Phillies ones, looked like war refugees camped out all around the place. 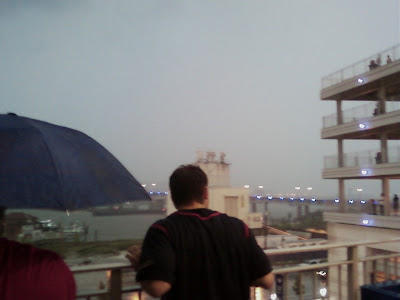 A young man peering over the edge of Nationals Park during a downpour / rain delay with the Frederick Douglass Memorial / South Capitol Street Bridge visible nearby, Washington, D.C., 7:44PM, Aug. 19, 2011.
#######


The rain fell for a good 90 minutes as gloomy dusk fell. I could actually see that it was raining AT National Airport maybe 2 miles away from the stadium's upper side deck, or at least the tarmac looked wet. 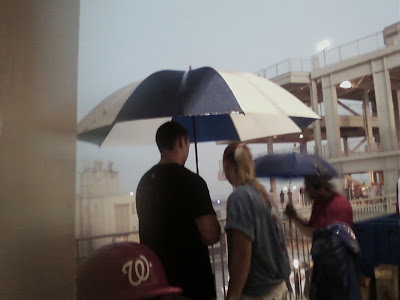 
Later on, I found out that 1.53" fell at DCA in the storm -- the OFFICIAL storm total -- and 1.61" for the day (there was earlier 0.08" in the wee hours of the morning in a brief thunderstorm). Of note, BWI Airport and Dulles (IAD) Airport had nothing in this event. 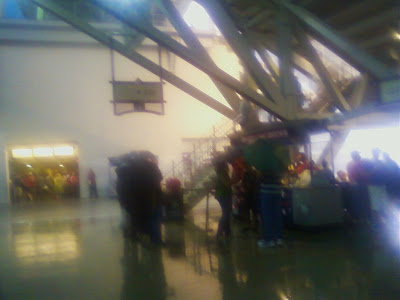 
The game resumed at 9:35PM and the seats were soaked -- but the stadium was still surprisingly crowded. I think that was partly because there were so many Phillies fans there and many had come on buses in other group rides. 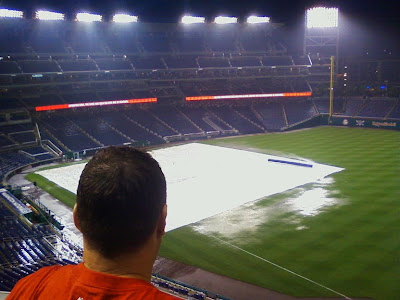 
We only stayed until the bottom of the 4th inning around 11PM when it was already 4 to 1 for the Phillies. This was a BIG mistake on my part based on how the game dramatically concluded (see below). 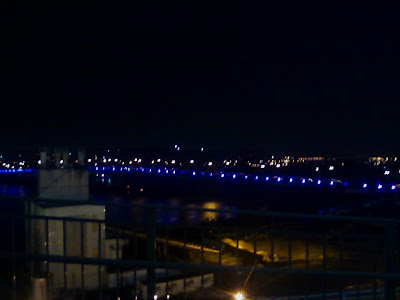 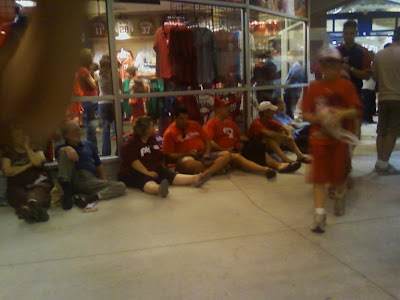 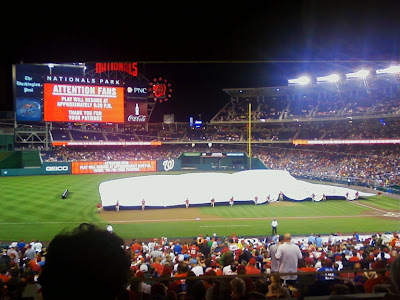 
Gary and I then took our planned walk through the radically transformed Navy Yard -- all the clubs from "back in the day" now gone and replaced by the antiseptic and depressing office buildings and condos that (in part due to the Great Recession / Lesser Depression we are still more or less in) are still nearly empty. 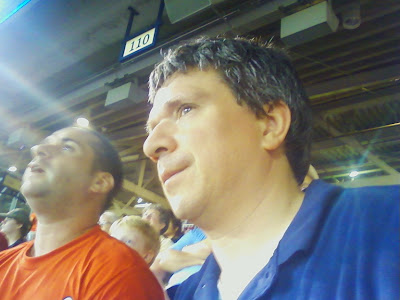 
Of course, it was ON the footprint of the stadium that all the legendary seedy D.C. gay bars, go-go places and sex clubs of the late 1960s/early 1970s until the early 2000s as the world changed around them were located: Ziegfield / Secrets, Men's Glorious Health and Entertainment (a.k.a. "the Glory Hole"), and La Cage Aux Follies. Actually, La Cage would've been just outside the stadium field proper.
I explained this (in muted fashion, leaving out details) to our company general counsel who was there after she bought me a beer. Maybe that wasn't the best idea I had all night. 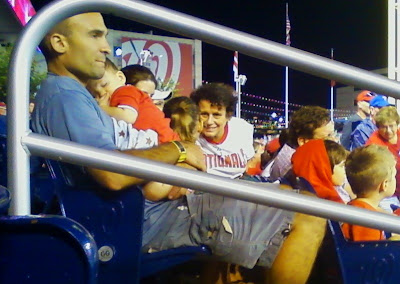 
I think the most depressing part was to see where the late, great Nation night club used to be. It is now a still-unoccupied, hideous office building addressed 1015 L Street. (Tracks was even more famous, but its run ended early on in my D.C. life before I used to do stuff like that much, and I was only there a few times.) 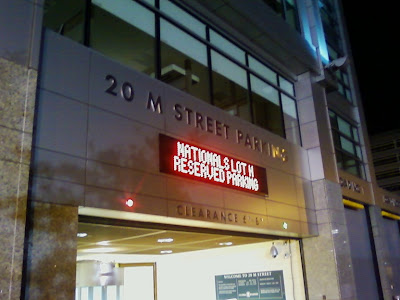 
Nation would draw in humanity from as far away as Richmond, central Pennsylvania and West Virginia. I think some of those club people (whether gay or straight night, it didn't much matter) ONLY existed at night...
We then walked up New Jersey Avenue ... out of Navy Yard and into Capitol Hill ... the Capitol Building dome looming up iridescent white in the now-still night air. New Jersey Avenue dives under I-395 (which badly severs Navy Yard and the sliver of area known as Southwest D.C. from the rest of the city even while both are hemmed in by the Anacostia and Potomac Rivers). 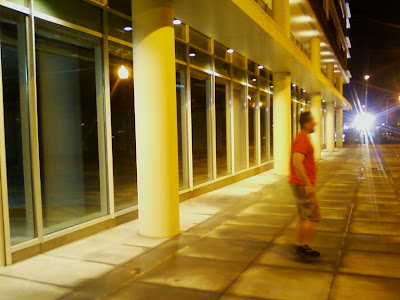 
New Jersey Avenue runs under I-395 and above a spur of the main freight train line that runs under part of the Capitol grounds (along with the main Amtrak and VRE lines). And there in the vaulted, eerie darkness of this forlorn part of the city, peering through the chain link fence, about 40 feet below and 120 feet away was that old white horse I mentioned in my previous entry. 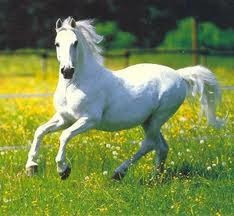 No, it didn't look quite this stately but it was the only white horse image I could quickly find.

I could see it in the darkness -- wanly lit by indirect light from the high-pressure sodium vapor street lamps -- in that old vestige of a stable that has somehow remained there for so long. It is in the back "yard" closed in by a large, old fence. That horse (it has to be the same one) has been there for at least 15 years and I'm tempted to go to that stable place and actually knock on the door and ask someone ... 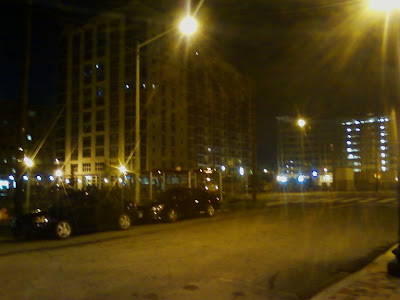 
We then walked into Capitol Hill and went to Bullfeathers, where S. was on as manager and bartender Mike was working. It was there that we watched on a flat screen TV the rest of the Nats - Phillies game happening barely a mile away. 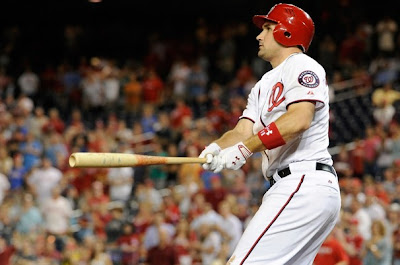 Ryan Zimmerman of the Washington Nationals at bat. I'm not sure if this was taken last night when he hit that grand slam "walk off" home run or not.
#######


Long story short, the Nats tied it 4 - 4 in the bottom of the 9th and then, with bases loaded, 2 strikes and 3 balls, Ryan Zimmerman hits a GRAND SLAM home run. The Nats won 8 to 4 and I'm really pissed off that I missed seeing that, although a short while later on the Metro while transiting from Capitol South to U Street / Cardozo via L'Enfant Plaza, I was able to see the sullen Phillies fans packed into the train cars heading out to the terminal stations (Greenbelt and New Carrollton) to begin to begin that long, depressing ride back to Philadelphia.
Life's a bitch.

Interestingly, the Nats won 8 to 1 over the Phillies last year when I was there. 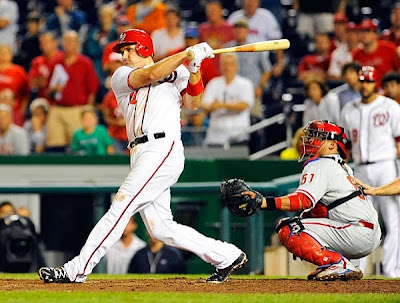 Another of image of Zimmerman at bat -- I think this was the winning hit last night.


I'm out of images for the remainder of this entry and in a rush so I will try to include additional images in an update later / tomorrow.
Unfortunately, I think this will be the one and only time I get to Nationals stadium for a game this year.
Anyway, Gary and I stopped in Nellie's briefly and then drove over in his car (which was parked nearby) to Larry's Lounge, where it was a big, festive night with Kristof, Jamie, and .... drumroll ... WENDY! ... just returned from Africa (Kenya) where she was working with refugees in a UN facility AND even went to South Sudan, the world's newest, among the poorest and more troubled nation.
I finally got to bed around 4AM.


Oh, yes, it looks as though there is going to be a possibly major hurricane next week, Irene, that impacts the Caribbean and POSSIBLY the East Coast in 7 to 10 days, unless it curves into the Gulf of Mexico instead. It may also be the FIRST bona fide tropical system -- rather than these blobs of thunderstorms and semi-baroclinic frontal zones over 20C ocean water at 38N latitude that the National Hurricane Center keeps calling tropical storms this year (hence the reason we are already up to the "H" storm).
Gary and I and possibly LP and/or Chris T are supposed to go to Wildwood, N.J., for our annual Jersey shore vacation next weekend ...
A little later on, I am going to Quill's parents' 45th wedding anniversary reception at a bar / restaurant in Silver Spring, so I have to wrap up this entry now. In fact, I may not post it until Sunday.
My next planned update will be either Monday or Tuesday.